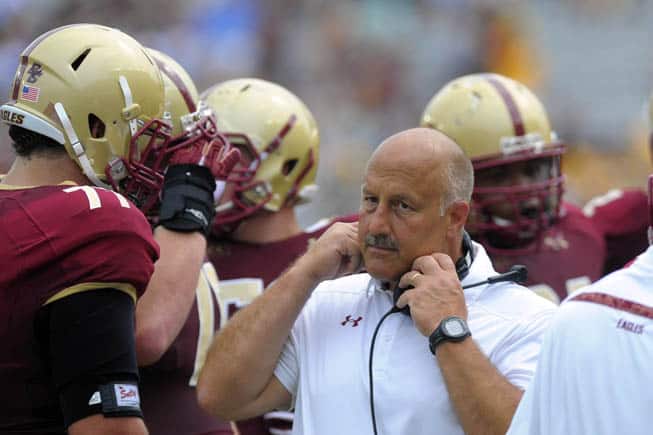 It’s Week 3 in the ACC, and — despite the small sample size — the conference has the look of basketball season. A glance atop the Atlantic and Coastal Divisions reveals the highly unlikely duo of Boston College and Duke. Both schools face tough tests this week, with the Blue Devils joining the Eagles as members who have started conference play. The week features regional rivalries, conference games and unusual matchups. We’ll take a look at all of those games…right after this trivia question!

ACC trivia, week 3 (answer at the end of the column): Virginia Tech’s streak of 93 consecutive sellouts came to a close last week in a 45-3 victory over Western Carolina. Who was the Hokies’ opponent during the last game at Lane Stadium in which they did not record a sellout?

Program guide: The Eagles found themselves outscored by almost ten points a game in the relatively lost 2012 season, and just two games into coach Steve Addazio’s tenure, BC faces off against USC with a lot more on the line than anyone could have anticipated. Eagle quarterback Chase Rettig has enjoyed a tremendous start to the season, completing 30-of-44 passes for 408 yards with four touchdowns and an interception in his first two games. Rettig is also blessed with one of the conference’s top receivers in Alex Amidon. Amidon and Michael Campanaro faced off last week, with both snaring five passes and Amidon outgaining Campanaro 93-86. Those 93 yards pushed Amidon over the 2,000-yard mark for his career.

Boston College has also turned into somewhat of a Linebacker U. of late, with Mark Herzlich and Luke Kuechly among the names who have transitioned from Chestnut Hill to the pros. Senior Kevin Pierre-Louis is looking to join them, and he is on the right track thus far. Pierre-Louis recorded 85 tackles in just nine games in 2012, and he leads the conference with 23 tackles through two games this season. The Eagle defense has allowed 601 yards through those two contests, and Pierre-Louis will have to play a huge role in holding USC at bay on Saturday.

The storyline in Los Angeles is quite obvious, and that storyline resides under center for the Trojans. Cody Kessler will take the snaps for Lane Kiffin’s club — to start the game, anyway — and he has arguably the better of the two current passers. Kessler has completed just 18-of-32 passes in two games, though, registering 136 yards with a touchdown and two interceptions. Kessler went 8-for-13 for 41 yards with a rushing touchdown in a loss to Washington State last week. USC passers actually have a lower rating (84.57) than their opponents (87.13).

BC running back Andre Williams rushed for 204 yards in last week’s outing against Wake Forest, bringing his season total to 318 yards. Williams’ average of 5.48 yards per carry faces the first real test of the season in a USC defense that is allowing a somewhat comical 0.57 yards per carry through two games. Trojan opponents have carried the ball 30 times for a paltry 53 yards on the season. Considering Rettig’s success throwing the ball and the stingy nature of the USC rushing defense, the path to victory for Addazio’s club appears obvious, if not easily reachable.

Let’s travel the conference with the assistance of our Keyword Search function!

Trivia answer: I asked earlier: Virginia Tech’s streak of 93 consecutive sellouts came to a close last week in a 45-3 victory over Western Carolina. Who was the Hokies’ opponent during the last game at Lane Stadium in which they did not record a sellout?

Imagine leading off the slate with a 2-0 B.C.team facing the Trojans.This would be a laugher,other than the Ryan years,and now it could be another win.Other than B.C.,Maryland could be the sleeper in the conference this year.Imagine those 2 teams being undefeated after 3 weeks.Strange things going on.

Brian great article, it would be nice to see your predictions of the games that are featured for the week.

Brian, who did va tech play in the game that started the sellout streak? Which team was victorious?