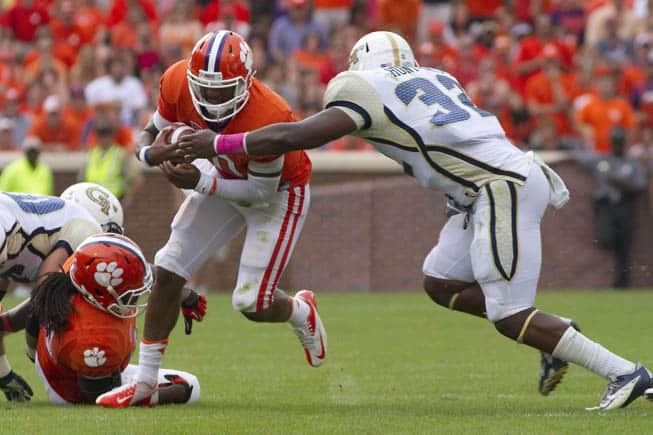 Week 11 in the ACC was one of questions and answers. Could Duke get over the six-win barricade at which they found themselves last year? The Blue Devils answered that question with a resounding “yes”. Would Pitt snap their three-game slide against the Fighting Irish? To the surprise of many, they did. Would we be any closer to finding out who could make reservations in Charlotte? We now know — to no great shock — that Florida State will be there, but we still have no better idea of which team will represent the Coastal.

One or two conference dates remain for ACC clubs, and there is still much to be decided. Georgia Tech has one last chance to lock up the Coastal, while Virginia Tech, Miami and Duke all remain alive — to varying degrees, of course. Just one team, the grossly-underachieving Virginia Cavaliers, has been eliminated from postseason play. Though the chances of 13 ACC teams becoming bowl-eligible are next to nonexistent, teams will begin to slot themselves before Thanksgiving. We’ll lay out this week’s important matchups…right after this trivia question!

ACC Trivia, Week 12 (answer at the end of the column): The series between Georgia Tech and Clemson began in 1898. In which city was the first game played between the two teams?

Program guide: On the surface, there appears to be very little drama in this matchup. Both teams have reached bowl eligibility. Clemson has been eliminated from a trip to Charlotte. Georgia Tech can only reach Charlotte if they win Thursday and can stay away from a tie with either Miami or Virginia Tech. Those two teams own the only victories over the Yellow Jackets.

The two teams had last week off, and they will end their ACC schedule in Death Valley. Clemson allows just 137 rushing yards per game against ACC teams (141 overall), but they have allowed one 300-plus yard rushing game already this season. Syracuse ran for 323 yards against the Tigers on October 5th. Georgia Tech leads the conference in rushing, having run for 2,801 yards. No other ACC team has rushed for greater than 2,000 yards on the season.

Georgia Tech averages 5.4 yards per carry against ACC teams. Clemson has only allowed a total greater than the Ramblin’ Wreck’s average twice this season (Georgia and Syracuse). To provide further context on the difference in rushing between the two teams, note that Clemson’s leading rusher, Roderick McDowell, has 677 yards on the season. Georgia Tech has 670 yards over the last two games. The task for Clemson is obvious — Tech ranks 119th in passing offense — but whether it is attainable remains to be seen.

Clemson, on the other hand, wants to throw the ball. They want to throw a lot. The Tigers are tenth in the FBS in passing offense (332.7 yards per game), 15th in scoring offense (39.8 points per game and 11th in total offense (507 yards per game). Georgia Tech offers a somewhat pedestrian passing defense, ranking 53rd in the FBS at 226.1 yards per game. This is one of those interesting instances where Georgia Tech’s defensive strength is Clemson’s offensive weakness — Clemson ranks 62nd in rushing offense — so, again, the task is clear, but its attainability remains to be seen. Clemson has thrown for fewer than 300 yards just once in the last six games. Georgia Tech has surrendered fewer than 200 passing yards just once in their last seven.

At the risk of sounding like a cliche, all signs seem to point to a Clemson victory. If there is one thing the ACC has shown us, though — particularly this year — passing judgment on what you see on paper is a dangerous proposition. After all the questions from last week, here’s this week’s question: Will Georgia Tech be in the driver’s seat for a rematch of last year’s conference championship game, or will Clemson play spoiler and keep their BCS bowl hopes alive? Tune in and find out.

Trivia answer: I asked earlier: The series between Georgia Tech and Clemson began in 1898. In which city was the first game played between the two teams?

The first of 78 games between Georgia Tech and Clemson was played on November 24, 1898. The 23-0 Tiger victory took place in Augusta, Georgia.

Another week of strong inside info on the upcoming games this weekend.The headliner should go the way of Clemson,barring a complete debacle on controlling the football,such as we last saw Miami do.Also,I would be willing to stick my neck out and say that B.C.Duke both win ,as well as Pitt.That would make B.C. and Pitt bowl eligible.Pretty good weekend for post season accolades.