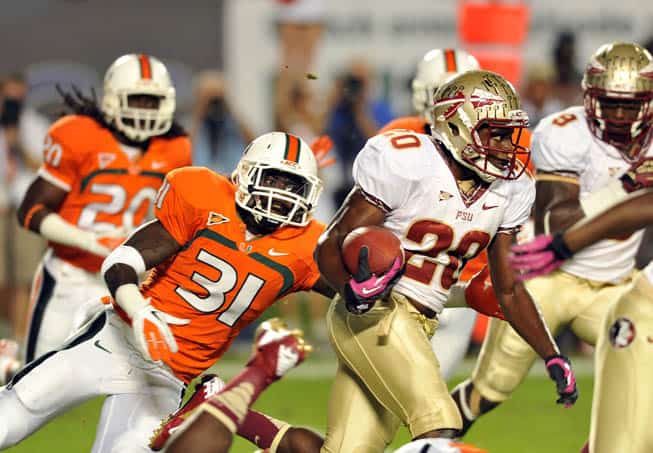 We get to flip another page on the calendar this week, as November is upon us. With a new month comes a narrowing race to Charlotte in the Atlantic Coast Conference. Virginia Tech appeared to be on a collision course — and still might be, honestly — with Miami next week to claim the inside track in the Coastal, before Duke put a minor dent in the Hokies’ chances. One more key Coastal game awaits for Miami before that matchup, however, and we will certainly talk about that game at great length.

Things are a bit clearer in the Atlantic. Florida State would need a combination of two losses against Miami, Wake Forest and Syracuse combined with Clemson winning out against Virginia and Georgia Tech to allow the Tigers to make the two-hour (or so) drive to Charlotte. Wake Forest’s microscopic hopes were dashed by a late loss to Miami, and the Queen City looks poised to welcome Jimbo Fisher’s troops for a return visit.

There are a half-dozen games on the conference slate this weekend, but before we talk about any of those games, it’s time for trivia!

ACC Trivia, Week 10 (answer at the end of the column): This week’s Miami-Florida State game marks the second game in ACC history where both teams had a record of 7-0 or greater. What was the other game?

Program guide: After the previous “game of the year” candidate between Florida State and Clemson resulted in a blowout victory for the Seminoles, the conference gets another crack at a season-defining contest. The Florida State-Miami rivalry has been one of the more historic in college football over the last three decades, so the significance and excitement level will be ramped up as high as it can go this year.

The Hurricanes enter this game coming off a less-than-impressive 24-21 victory over Wake Forest. Miami’s reliance on Duke Johnson is more than justified. Johnson, who scored the game-winner last week, leads the conference in all-purpose yards (182.9), and trails only Boston College running back Andre Williams in total offense. Johnson and the ‘Canes face a top-thirty rush defense in Florida State, but this may be Miami’s best chance to get on the board. NC State’s Shadrach Thornton torched the ‘Noles last week (more on his performance later), and FSU is unbelievably stingy through the air.

Florida State’s pass defense is the number one such unit in the FBS. The Seminoles have allowed no more than 203 passing yards in any game this year, with four opponents tallying fewer than 200 yards. Jimbo Fisher’s team is allowing just 186 passing yards per game against ACC opponents. Miami quarterback Stephen Morris turned in a somewhat pedestrian effort last week, completing just 17-of-28 passes for 191 yards and a score. Morris threw four interceptions in another late victory over North Carolina in his prior outing, so the matchup against FSU — through the air, certainly — is not a great one for Al Golden’s squad.

The Seminoles are certainly an offensive juggernaut, averaging 553.7 yards and 52.6 points per game, ranking in the top five nationally in both categories. The ‘Noles average 50.4 points per game against conference opponents, hanging 63 and 49 on visitors to Doak Campbell Stadium. Quarterback Jameis Winston ranks fifteenth in the FBS in total offense, registering 329 yards per game. He will face a Miami pass defense that allows just over 200 yards per game, good for seventeenth in the FBS.

FSU running back Devonta Freeman ranks third in the ACC in rushing yards per game (80.4), and his task against Miami’s 39th-ranked run defense is not as easy as it looks on paper. The ‘Canes gave up 335 yards to run-heavy Georgia Tech, but limited North Carolina and Wake Forest to just 164 total rushing yards. Freeman does have 239 yards and four touchdowns in his last three ACC games, however. Freeman also carried 10 times for 70 yards and two scores in last year’s 33-20 victory over Miami.

Both teams will take the field in Tallahassee with nine-game winning streaks. As we previously mentioned, Florida State enters this game having defeated Miami last season. Miami has not defeated the Seminoles since a 38-34 decision in 2009. Most expect Florida State to emerge with a huge victory, but the potential for Miami to fully proclaim their program as having returned to the national conversation live in prime time certainly has to loom large for the ‘Canes. A win for the Seminoles essentially locks in their trip to Charlotte, and this game could be a preview of the opponent they would see in the Queen City.

Trivia answer: I asked earlier: This week’s Miami-Florida State game marks the second game in ACC history where both teams had a record of 7-0 or greater. What was the other game?

Another great week of analysis in the ACC.After this week,the conference championship should be pretty well defined.Fla.St.,barring a loss should represent one of the two teams,with probably Va.Tech being their opponent.One has to feel sorry for Va.,having to face Clemson,who is probably angry with blowing their opportunity to win the conference and have a possible chance at a national championship game.