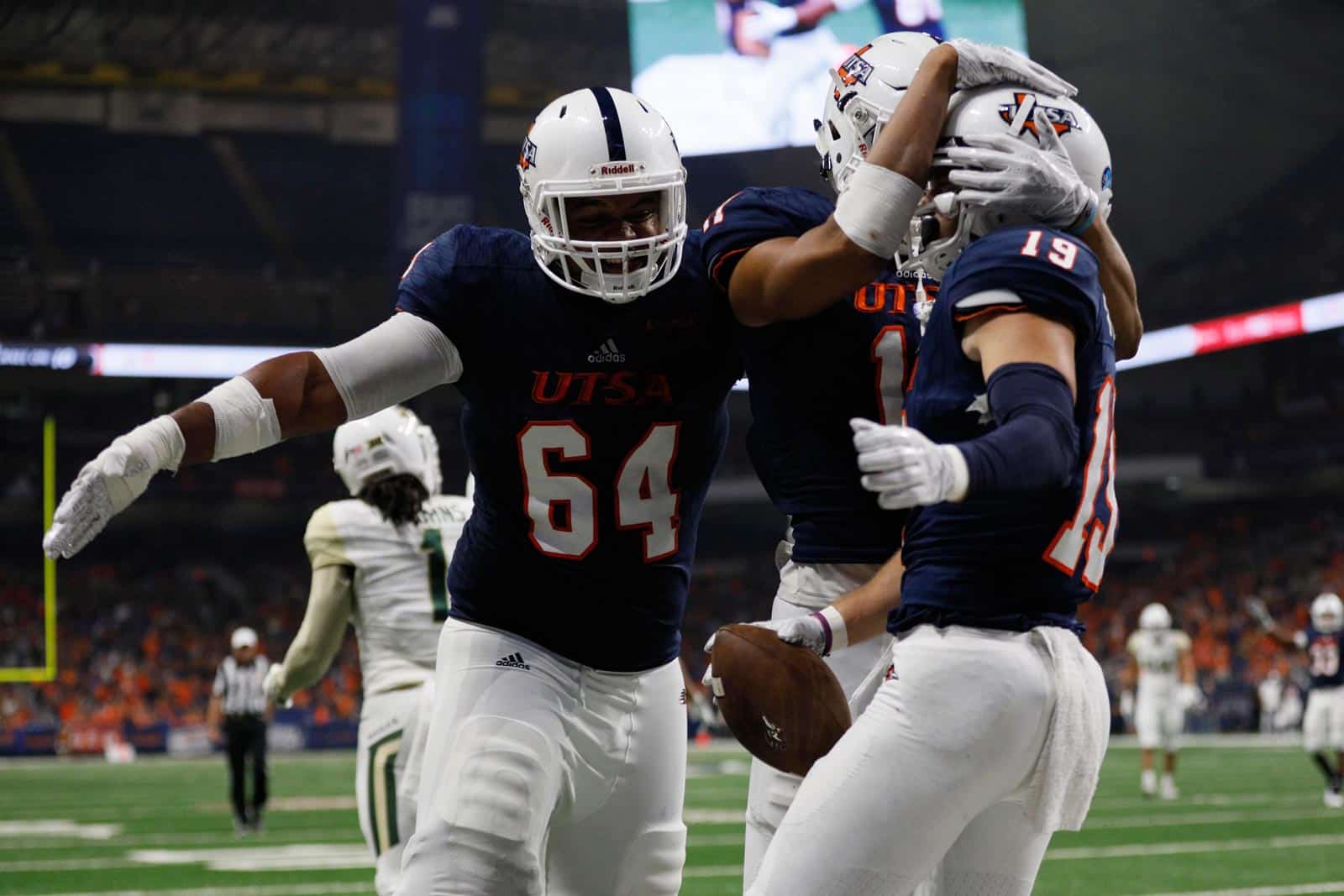 It’s as though football never left, isn’t it?

Stadiums are again full. Upsets are happening. Playoff previews are taking place every week. There was even a slightly crisp feeling in the air for 11 minutes here in the southeastern United States a few days ago.

This week, we’ll have two top-tier SEC teams dominating the airwaves, along with a number of great marquee — and not-so-marquee — matchups you need to enjoy while being fused to the recliner for 15-plus hours. We’ll take you through some of those right here in this very space!

(Just please stop trying to make Oklahoma-Nebraska a thing. We beg you.)

Before we head into the great and not-so-great from last week, it’s time for trivia!

TRIVIA (answer at the end of the column):  The last time Virginia and North Carolina played at a neutral site happened in Norfolk, Virginia, in 1944. Who was the only team to beat UVa that season? Bonus:  What was notable about that one game UVa lost?

What I said:
Memphis (1-0) at Arkansas State (1-0, +5.5), 7pm Saturday, ESPN+
That’s it. That’s the tweet:  Arkansas State hung 40 on a pretty solid UCA team last week.  The Red Wolves are 4-3 against Memphis in the last seven, which span from 2006 to 2020.
What happened:  Memphis 55, Arkansas State 50.  The Red Wolves covered, and continued to show themselves as a team that will create problems for many foes this season.

What I said:
Appalachian State (1-0) at #22 Miami (FL) (0-1, -9), 7pm Saturday, ESPNU
That’s it.  That’s the tweet: App thumped ECU last week in Charlotte, while Miami got boat-raced by Alabama. Chase Brice went 20-for-25 at Duke against Miami last year, but only threw for 94 yards. He’ll be a huge key. This would be a quality win for Miami, too.
What happened:  A first-quarter safety recorded by the ‘Canes essentially turned out to be the difference in a 25-23 Miami result. Another cover, and the Mountaineers proved they belonged on that stage. As for Brice, he went 21-for-34 for 199 yards, adding a score and pick.

What I said:
Liberty (1-0, -4) at Troy (1-0), 7pm Saturday, ESPN+
That’s it.  That’s the tweet: Both teams come in off rolling FCS foes, and this will tell us a lot about two teams that were trendy picks to do big things this season. Liberty quarterback Malik Willis is a sleeper Heisman candidate.
What happened:  Liberty 21, Troy 13. Willis attempted just 18 throws on the night, connecting on 13 against a really solid Troy defense. The Auburn transfer accounted for all three of the Flames’ end zone visits, throwing two and rushing for another.

What I said:
Vanderbilt (0-1) at Colorado State (0-1, -7), 10pm Saturday, CBSSN
That’s it.  That’s the tweet:  I think I’ll be watching this more out of morbid curiosity than anything else. CSU fans were annoyed last week, but at least their team hadn’t already demoted its offensive coordinator and lost by 20 to an FCS team.  An 0-2 start would anger either team’s fan base.
What happened:  Vanderbilt 24, Colorado State 21. Vandy has its first win since 2019, and CSU is still looking for answers. The Rams will likely never have a better look at taking down an SEC opponent than that one, and Steve Addazio’s 1-6 since arriving in Fort Collins. Yikes.

Welp…:  Some things also didn’t turn out as I’d anticipated — for example:

What I said:  #15 Texas (1-0, -7) at Arkansas (1-0), 7pm Saturday, ESPN
That’s it.  That’s the tweet:  YES. The Longhorns and Razorbacks haven’t teed it up since 2014, but the former-SWC and soon-to-be-SEC rivals will go Saturday night. Texas still won’t be “back” if it wins this game, but there’ll be some extra juice on both sidelines.
What happened:  Arkansas stomped Texas pretty much from the jump. The Razorbacks throttled Texas, 40-21, demolishing the line and the Longhorns. No idea on where Texas goes from here, but Arkansas is definitely back in the SEC conversation.

Also:  North Dakota appeared in decent shape to compete with Utah State in Logan. They did not, as the Aggies hung 48 on UND in a convincing win.

AAC
What I’m watching:  UCF (2-0, -6.5) at Louisville (1-1), 7:30pm Friday, ESPN
That’s it. That’s the tweet: The Knights celebrate their Big 12 invite by heading into ACC country to start the weekend. The calls from Louisville message boards — for right or wrong — to ditch Scott Satterfield have been growing ever louder, and a loss Friday night would only feed the mob.

ACC
What I’m watching:  Virginia (2-0) at #21 North Carolina (1-1, 0-1 ACC, -9), 7:30pm Saturday, ACCN
That’s it.  That’s the tweet: The 126th installment of The South’s Oldest Rivalry sees UVa enter on a four-game win streak in the series. Most national voices seem confident Carolina wins here, but if Brennan Armstrong is as advertised, the Tar Heels would be in full-on panic mode at 0-2 in league play.

Big Ten
What I’m watching:  Purdue (2-0) at #12 Notre Dame (2-0, -7), 2:30pm Saturday, NBC
That’s it.  That’s the tweet: This is one of those “prove yourself” matchups for the new(ish)-look Boilermakers. Notre Dame has looked vulnerable against Florida State and especially Toledo, so if there’s ever a time to get them, it’s now.

The big story, though, is this:

Purdue's All American Marching Band’s Big Bass Drum (aka World’s Largest Drum) will miss its first performance since 1979 because it can't fit through visiting team tunnel at Notre Dame, which won’t let band use main tunnel. From "This Is Purdue" podcast:https://t.co/OevE96Gdp7

Big 12
What I’m watching:  Nevada (2-0, -2) at Kansas State (2-0), 2:00pm Saturday, ESPN+
That’s it.  That’s the tweet: Carson Strong has followed up a tremendous 2020 campaign with a sizzling start that sees him completing north of 68 percent of his throws over the first two Wolf Pack tilts. He’s found the end zone six times against just one pick. Seeing him against a Big 12 defense should tell us a lot about both parties.

CUSA
What I’m watching:  Middle Tennessee (1-1) at UTSA (2-0, -13), 6:00pm Saturday, ESPN+
That’s it.  That’s the tweet: Middle looked good against a quite talented Monmouth team to start the campaign, then cratered in Blacksburg last week. The high-powered Roadrunners — a top-40 passing team in the land — get a decent test before having to trek to the Liberty Bowl next week.

Independents
What I’m watching:  #19 Arizona State (2-0, -4) at #23 BYU (2-0), 10:15pm Saturday, ESPN
That’s it.  That’s the tweet: Jayden Daniels has been so good for Arizona State early this season, hitting receivers at a nearly 73-and-a-half-percent clip. The Cougars have handled back-to-back Pac-12 teams, but they’ll need to be at their best defensively to claim a third. The absence of  ASU’s Jermayne Lole should afford Jaren Hall slightly more comfort in the pocket for the Coogs.

MAC
What I’m watching:  #16 Coastal Carolina (2-0, -14) at Buffalo (1-1), Noon Saturday, ESPN
That’s it.  That’s the tweet: Buffalo looked anemic against a rather bad Nebraska club last week in a 28-3 dud. The Chants are 19th in the nation offensively, and Grayson McCall is as good a quarterback as the Bulls will see all season. This feels like a chance for Coastal to strut its stuff on national TV.

Mountain West
What I’m watching:  Fresno State (2-0) at #13 UCLA (2-0, -11.5), 10:45pm Saturday, Pac-12 Network
That’s it.  That’s the tweet: UCLA looked real against LSU, but now gets to ply its wares against a team with an offense and defense both in the top 20 nationally. The real storyline here is Fresno’s Jake Haener — he of the eight touchdowns and zero rips — against a somewhat pedestrian UCLA pass defense ranked 115th in the land. The Bruins have, however, snared three interceptions early on.

Pac-12
What I’m watching:  Arizona State/BYU, Fresno State/UCLA.
That’s it.  That’s the tweet:  I guess Utah-San Diego State is also an interesting matchup, but BYU took a lot of the starch out of that game by clipping the Utes last week. Also, Colorado’s giving Minnesota three after the Buffs’ fiasco last week — and Vandy’s buying a dozen from Stanford following its huge win last week? Storylines abound.

SEC
What I’m watching:  #1 Alabama (2-0, -14.5) at #11 Florida (2-0), 3:30pm Saturday, CBS
That’s it.  That’s the tweet:  Auburn/Penn State and Tulane/Ole Miss bear some watching here as well, but this matchup of league blue-bloods should leave the Gators more black-and-blue than blue-and-orange. What a win for Dan Mullen, though, if he finds a way for his side to grab it.

Also, Georgia State — yes, 0-2 Georgia State — is giving 2-0 Charlotte four in Atlanta? I wonder how many people will have the rocks to bet that game. (Again, this is a good time to note that I don’t bet on any of these, and nothing I say should be construed as financial or gambling advice.)

And now, for what I’m watching from each FCS league.
Note:  The AQ7, or the WAC-ASUN Challenge, a scheduling alliance between teams from the ASUN and WAC conferences, does not begin play until September 25, when it plays a limited weekly slate.

TRIVIA ANSWER:  I asked earlier: The last time Virginia and North Carolina played at a neutral site happened in Norfolk, Virginia, in 1944. Who was the only team to beat UVa that season? Bonus:  What was notable about that one game UVa lost?

NC State defeated Virginia, 13-0, in 1944. The Wolfpack gained ten total yards and recorded exactly zero first downs in the victory. The game was played in incredibly muddy conditions, leading UVa to fumble eight times. Two of those fumbles were recovered in the end zone by the ‘Pack for the lone scores. (And no, friend of the column Clint Davis was not in attendance for that one.)

Not surprised Notre Dame would do such a shifty thing.