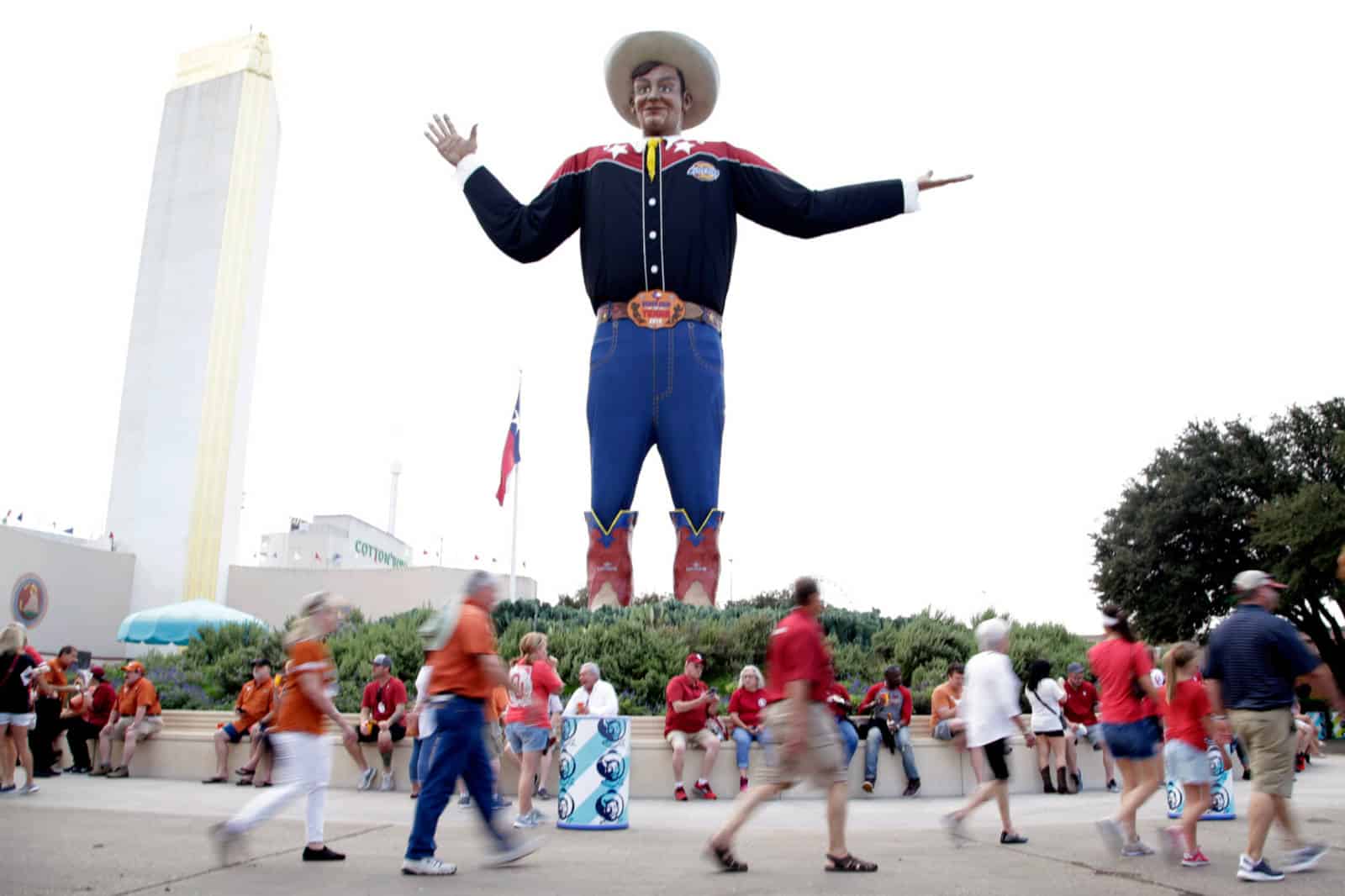 Another week passes, and so too does the oppressive heat with which much of us dealt for months. Maybe those of us in the Carolinas will soon be able to step outside and see the unfamiliar sight of water falling from the sky, as well.

The Red River  Shootout (put some respect on its name) is again upon us, and though Lincoln Riley insists the Sooners will refrain from the tired “Horns Down” act this week, his comments are not stopping others from drudging up the “insult”. To wit:

Thank goodness there’s now a penalty-enforced “ban” on the gesture. It’s tired — especially so when one considers Oklahoma has won seven of the last 10 in the series. The only anti-Texas troll more tired would be if A&M fans painted “13-0” all over themselves, assuming the stupidity that influences the Aggies and Longhorns not playing each other ever subsides.

As is tradition, we’ll take you through three of the more “under-the-radar” games we’ll be watching, along with recapping what we watched last week at both the FBS and FCS levels. Before we do that, though, we’ll bonk you over the head with a trivia question, and give you the answer at the end of this here piece.

Tulane 42, Army 33:  We talked last week about winning the rushing battle, and holy cow, did Tulane win the rushing battle. The Green Wave outpaced the Black Knights, 324-193, on the ground. 17 Tulane first downs came on the ground, against just 12 for Army. Willie Fritz’ club rushed for five scores, en route to a near-total domination of Army in counting statistics.

Tulane’s resilience is also of note. The Green Wave jumped ahead, 21-7, following three consecutive scoring drives. Army battled back and drew the game level at 21, before 21 more unanswered Green Wave points largely put the game out of reach.

Army’s remaining schedule doesn’t appear prohibitive of it reaching a bowl yet again, and the possibility of a third straight double-digit win season — though remote — is still in play. Tulane faces just two more ranked opponents — both on the road (Memphis and SMU) — but this could be the year the Green Wave get over the hump and play for their first-ever American title.

North Dakota State 37, Illinois State 3:  Another week, another victim of the Bison buzzsaw (Biz-saw?). Trey Lance needed only to attempt 15 throws for NDSU Saturday, but he completed 12 of them. 25 percent of those went for scores. Ty Brooks added nine carries for 106 yards and a score, along with a 79-yard kickoff return.

The Bison square off with 10th-ranked Northern Iowa this weekend — you’ll recall we told you last week that Northern Iowa snapped the last significant win streak turned in by the Bison — but the likelihood of that happening again has to be fairly insignificant.

As for NDSU’s opponents going forward…well, take it away, Clubber:

Navy 34, Air Force 25:  The Mids took down the Falcons in the first leg of the battle for the Commander-in-Chief’s Trophy, and there’s a pretty interesting longform piece in the Capital Gazette that goes into the game and the months of decisions that led up to the result. Among the tidbits it divulges:

Meanwhile, [new Navy defensive coordinator Brian] Newberry made his service academy debut by devising a defensive game-plan that held Air Force well below its season averages of 34.5 points and 332 rushing yards. The Falcons only managed 108 rushing yards in scoring 25 points, going 5-for-17 on third down conversions along the way.

Air Force drove deep into Navy territory four times and was forced to settle for field goals on each occasion. Navy’s defense stiffening in the red zone and preventing touchdowns on those four possessions proved crucial.

Ken Niumatololo’s crew gets a bit of a respite — such as it is — over the next four weeks, with trips to Tulsa and UConn bookending visits from USF and Tulane. They then close the season at Notre Dame, home against SMU, and at Houston, before the traditional Army-Navy tilt to finish the slate. Navy has already equaled its win total from last season, and a return to the postseason is certainly within its grasp.

Temple enters the contest Saturday in Philadelphia having been gifted — if one can call it a gift — a couple of extra days to prepare for visiting Memphis, having turned away ECU, 27-17, in a Thursday night tilt its last time out. It could probably use those extra hours to gear up for a Tiger offense that has eclipsed the 35-point mark in each of its last four contests.

For all Memphis’ recent offensive prowess, however, the Tigers and Owls are separated by just greater than 17 yards per game in total offense. Temple fell just one yard shy of cracking the 500-yard plateau in that win in Greenville last time out, putting up an incredibly balanced 237 rushing yards and 253 passing. Owl quarterback Anthony Russo is 109-for-185 on the campaign, having thrown for 1289 yards and 11 touchdowns against six picks. Freshman Re’Mahn Davis has served as a nice compliment to Russo, tallying 84 totes for 503 yards and four scores.

The Tigers see the Owls’ freshman running back and raise with their own, however. Kenneth Gainwell (great name) has 76 carries for 620 yards and six touchdowns. Gainwell’s yardage total tops the league, and the youngster has galloped for 458 yards over his last three outings.

This game seems to line up for a late defensive stop to prove decisive, which likely means that one side will win by 30. College football…we wouldn’t have it any other way.

Considering North Carolina A&T’s success at the national level and in the Celebration Bowl of late, much of the focus on the MEAC rests squarely on the Aggies. To key on A&T, while understandable, also ignores the looming challenge presented by the Rattlers and Bulldogs.

FAMU boasts the MEAC’s leader in passing yards and near-leader in passing touchdowns in grad student quarterback Ryan Stanley. Stanley, who has thrown for greater than 2,000 yards each of the last two seasons, appears headed for that mark again this season, connecting on 100-of-163 passes for 1281 yards and 10 scores against just two picks. Over 35 percent of those completions have landed in the mitts of wideout Xavier Smith, who has 36 grabs for 458 yards and three scores. Smith has 21 catches for 227 yards and two touchdowns in league play.

South Carolina State’s Tyrece Nick has thrown for 592 yards and six scores on the other side, but his mobility creates a significant problem for the Rattlers. Nick has carried 40 times for 177 yards and a touchdown, hot off a season in which he carried 211 times for 903 yards and 12 trips to the paint. Bulldog kicker Dillon Bredesen enjoys the advantage on placements, hitting 4-of-5 field goal attempts with a long of 41. FAMU’s Yahia Aly connected on all three of his attempts against Norfolk State with a long of 52 to open MEAC play, but has hit just 2-of-6 outside that game.

A significant storyline also rests on the sidelines. South Carolina State legend Willie Jeffries — for whom the field at Oliver C. Dawson Stadium in Orangeburg is named — is the co-owner the record for most wins by a head coach at State, with 128. His protege, Buddy Pough, holds the record alongside him. A win Saturday — against a FAMU team Pough’s clubs have beaten 15 times in 16 prior attempts — would give Pough the honor all to himself.

Pough remains deferential to his mentor, as The Times and Democrat chronicles:

“Coach is happy for us and excited for us, and he will be the happiest guy of all that one of his guys is the guy who will get a chance to break his record,” Pough said. “But, at the same time, we will never replace him. He is the guy who everybody thinks about when you say South Carolina State football.

“He is South Carolina State football and that will never change.”

FAMU welcomes A&T to Tallahassee next weekend, so it is nearly impossible to oversell the significance of these two upcoming weeks for the Rattlers. The road is hardly easier for SC State, with a trip to Bethune-Cookman October 26 one week before A&T descends on Orangeburg.

Check out two of the legendary programs in the HBCU ranks Saturday, and be sure to hang around for the Marching 101 at the half.

Shoutout to Dakota for mentioning this game:

The Yale sports information department did an outstanding job laying out the key points of this game, so give them the click to honor their work. I’ll add that the line (Yale +13) seems big to me, but that’s an observation, not gambling advice. If you take any gambling advice from me, you deserve to lose every dollar you put down. The winner will keep pace with fellow league undefeateds Harvard and Princeton. They’ll also be considerably smarter than I.

Chaos again abounds in the Mountain West, as just five teams — including Fresno State, who have yet to play a league game — are undefeated in the circuit. This contest features the top two offenses in the Mountain West, with Hawaii (482.2 yards per game) and Boise State (480.6) separated by fewer than two yards per game. Both sides feature top-five defensive units in the league, as well, though Boise (second, 305.6) outpaces Hawaii (fifth, 391.8) by greater than 85 yards per contest.

Continuing the one versus two motif, the teams’ signal-callers are the top two in the league. Hawaii’s Colin McDonald leads the league, completing 131 of his 190 attempts for 1,629 yards and 17 touchdowns against nine picks. Boise State freshman Hank Bachmeier has made good on 106-of-167 for 1,489 yards and eight scores, while surrendering three rips.

No rusher for either team has greater than 300 yards on the season, and with both teams featuring middling run defenses, the middle of the defensive backfield may soften a bit later in the contest. With both teams sporting top-four aerial defenses in the league, this should be quite the exciting irresistible force/immovable object situation.

The winner finds itself in outstanding shape to contend for a league championship. For that matter, the loser may also still find itself with the possibility of competing for a Mountain West crown.

TRIVIA ANSWER:  I asked earlier:  Oklahoma and Texas have tied five times in the 114 games played between the two. Who was the President of the United States at the time of the first tie, and who was POTUS at the time of the most recent?

Franklin D. Roosevelt was just months into his second term at the time of the first-ever tie, a 7-7 draw in 1937. Fast-forward 58 years, and you would have found Bill Clinton in the White House at the time of the most recent tie. The two sides finished level at 24 in 1995.

His other job is getting in the way this year so he is taking a redshirt.

Thanks Clint, what are you interested in doing? I mainly just need article contributors.

Outstanding job.Thanks a bunch for putting ‘shootout’ in there for rivalry.The PC culture is beyond ridiculous