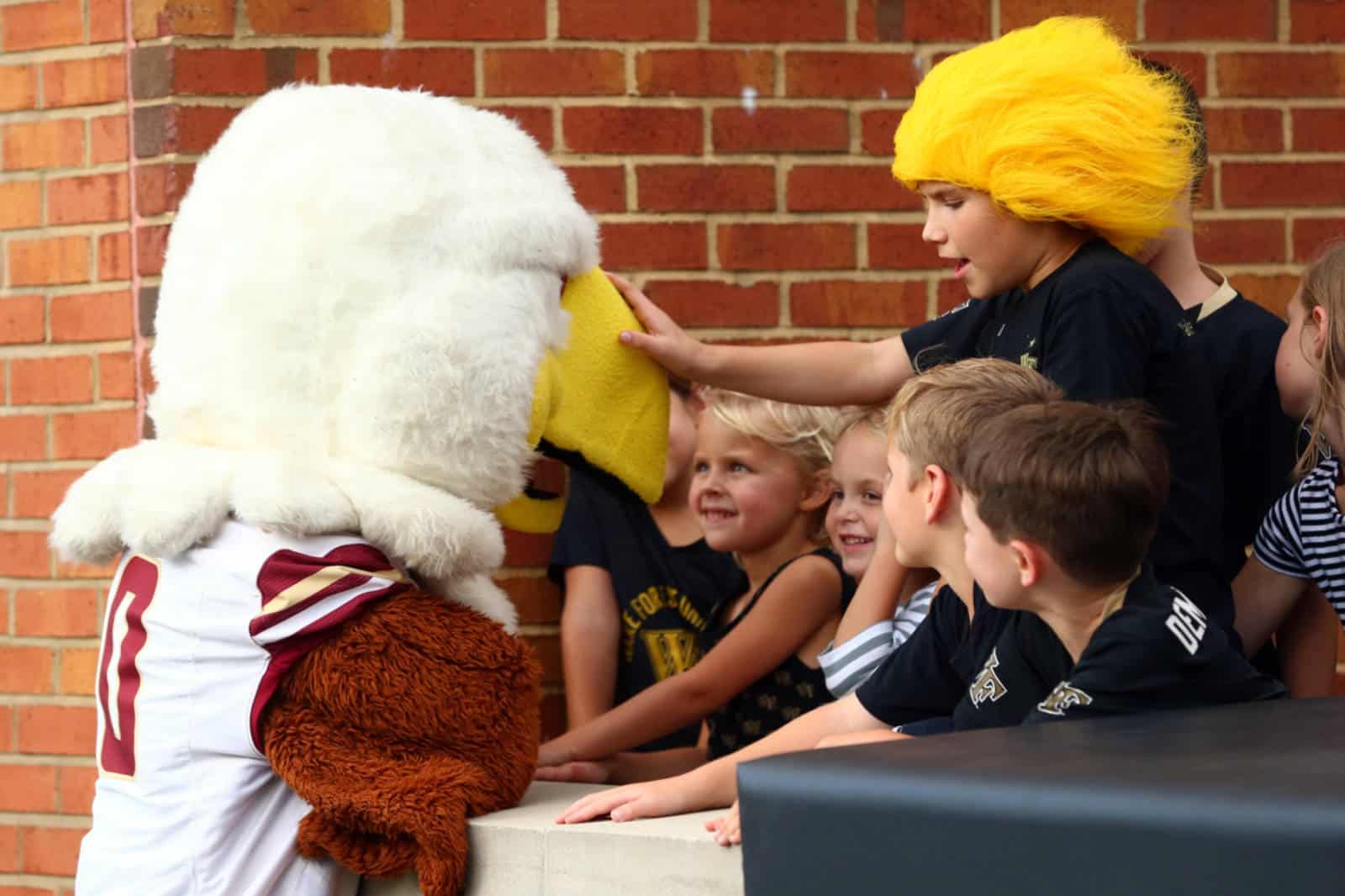 It’s about that time.

Fall (or autumn, or whatever you may call it in your region of the country or world) is here, and even though it’s still 11 billion degrees outside while you’re swilling pumpkin spice everything, the trappings of the season are upon us.

Let’s take you on a spin back through last week’s action, look at our Take of the Week, then press the play button on three of the games we’re watching this week that may fall just a bit below your radar.

Before we do any of that, it’s trivia time!

TRIVIA (answer at the end of the column):  Many schools have creative turnover celebrations. How does Elon University commemorate players who force turnovers?

TAKE OF THE WEEK

"I base my rankings on what teams have done. This year. Not last year."@BerryTramel with one of the more unique Top 10 lists we've seen so far this year. Spot anyone missing? pic.twitter.com/HygTRkx44V

1. Auburn (4-0, 1-0 SEC)
The Tigers have pulled off a miraculous victory against a pretty decent Auburn team, thumped Tulane and Kent State in easily forgettable home victories, and struggled to an eight-point win over a somewhat pedestrian Texas A&M team, with the added difficulty factor of the victory coming at Kyle Field.

Still, not buying that the Tigers are the best team in the land, by any criteria.

2.  LSU (4-0, 1-0 SEC)
The Tigers pulled off a decent enough victory at then-11th ranked Texas, despite surrendering 38 points in the loss. The narrative after that game was that maybe Texas was better than we thought. Fast-forward to last week, when Vandy also hung 38 on the Tigers, and, yeah, maybe not so much. Victories over Georgia Southern and Northwestern State comprise the rest of the Tigers’ record.

Great team? Sure. Second-best in the land? Nah.

3.  Cal (4-0, 1-0 Pac-12)
The Golden Bears won the game we covered in this space a couple of weeks ago at Washington, a 20-19 decision that wrapped at nearly 4:30am here in the southeast, owing to storm delays. Justin Wilcox’ team beat a top-tier FCS team in UC Davis by two touchdowns, then beat North Texas and Ole Miss by a combined 14 points. I guess they’re still the Pac-12’s last lone hope for a College Football Playoff bid, but…pass.

Iowa eighth? The team with a one-point victory over Iowa State, and its other two victories against Miami — the Ohio one — and Rutgers? Get all the way out of here.

USC ninth? The Trojans are on their third-string starting quarterback, and lost to BYU, who just got thrashed by Washington. Nope.

And then, there’s Kansas State. They’ve beaten Nicholls, Bowling Green, and Mississippi State. The same Mississippi State team who played half the game without its starting quarterback, Tommy Stevens, who was forced to leave due to injury.

Tramel at least tried — poorly — to justify his K-State decision. He said, in part:

“I mean, I had to put somebody at ten,” Tramel told Finebaum when asked why he put K-State at No. 10. “I actually think Mississippi State’s an okay team. The problem is there’s not that many teams with good wins this year. I could’ve put Alabama in there, I suppose. Winning at South Carolina’s decent, but the Gamecocks look a little shaky to me. I could’ve put Texas in there for beating Oklahoma State the other night at home, that’s a solid win. But for the most part, you don’t have that many teams with notable victories yet in this season and that’s why teams that have good wins, stand out to me.

“…I’m trying to get people to think like this.”

No. Stop that. You stop that right now. Roll up a newspaper and bonk yourself on the nose. Bad voter.

I could write thousands of words in response to this, but I’ll simply go to an old standby.

Let’s spin back through last week and see how the games we watched unfolded.

Boise State 30, Air Force 19:  The Broncos forced (pardon the pun) the Falcons to throw a little more than they would have preferred, though Air Force’s passers combined to go 8-for-13 for 113 yards. Further, no Falcon rusher tallied greater than 67 yards, which resulted in quite the suboptimal mix for the visitors.

Hank Bachmeier turned in another solid effort for Boise, connecting on 19-of-26 throws for 263 yards and two scores. Robert Mahone added 73 rushing yards and two touchdowns of his own.

With this effort, combined with UCF’s loss at Pitt, Boise is now again firmly in the discussion for the top G5 spot.

North Dakota State 27, UC Davis 16:  UC Davis played incredibly well in the Fargodome last week, as pretty much anyone who watches the FCS would have expected. However, The Aggie used some slightly different terminology to describe the proceedings than would I (emphasis mine):

Despite the disappointing 27-16 loss, the Aggies came away from this game with a renewed sense of positivity and optimism after the team came so close to shocking the world.

Trailing 20-16 midway through the fourth quarter, the Aggies had three offensive plays from inside the Bison four-yard line, but a pair of stuffed runs followed by a costly interception from quarterback Jake Maier appeared to seal the visitors’ fate.

Maier was then picked again on the ensuing drive following an Aggie defensive stop, after which North Dakota State cashed in the eventual winning score.

All credit to Davis, as the Aggies did acquit themselves quite well overall. North Dakota State seems to just find a way to win, and they’ve now won 58 of their last 63 games.

Appalachian State 34, North Carolina 31:  Another decent effort from App quarterback Zac Thomas (20-29, 224 yards, INT) and his three top receivers (Thomas Hennigan, Malik Williams, and Corey Sutton combined for 19 of those grabs and 226 yards), but running back Darrynton Evans carried the Mountaineers — literally. Evans ran for 78 yards and hit the paint three times, allowing his club to hold off the Tar Heels and win the “game of a lifetime”, as it was called in the run-up to kickoff.

Really, though, I’m just ecstatic to have an excuse to hear this again:

Now, let’s take a look at three of the more under-the-radar contests I’ll be watching on what is, overall, a bit of a lesser slate this weekend.

JMU rolls into Rhodes Stadium for a Family Day matchup in the outskirts of Burlington (I went there, I can joke), in a rivalry that has taken on quite a bit of spice of late. The Dukes are winners of three in a row following a season-opening loss at West Virginia, while the Phoenix got pantsed at Wake Forest last weekend. This is when the fun starts, though, as it both kicks off Colonial play and takes us back to last year.

You see, last year, the Phoenix went to Harrisonburg and got a Connor Christiansen rip with five remaining seconds to secure a 27-24 victory over the Dukes. The win was Elon’s first-ever over JMU (in seven tries), and as Elon’s sports information department notes, its first-ever win over a team ranked in the top five.

The man coaching the Phoenix at the time? Why, that would be Curt Cignetti, who is now JMU’s head coach, following Mike Houston’s departure for East Carolina in the offseason.

DiNucci and Elon quarterback Davis Cheek have thrown for 15 touchdowns against just one rip on the year. Cheek’s last rip came last year against USF, a string of greater than 200 throws without one going the other way.

This shapes up to be a game that stays close throughout, with the Phoenix figuring to need to force a turnover late — again — to vanquish the Dukes in back-to-back years.

I know what you’re thinking, but why wouldn’t we watch this game? Considering there are just five winless teams remaining in FBS, and two of them are playing each other, this game merits some interest.

If you still wonder why we would watch, behold (thanks, Akron sports information department!): 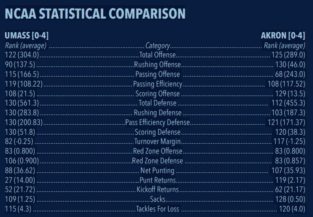 Clemson still rules the Atlantic Division of the ACC, as we know, but both schools are battling for the distinction of being that “next” team in the division. The Deacs are 4-0 for the third time in four seasons, but last went 5-0 to start the 2006 campaign.

You remember that 2006 season, no? The Deacs went 11-3 that year, and won what was arguably the most rock fight-like of any of the ACC title games, a 9-6 result against Georgia Tech in a rain storm in Jacksonville. Despite a loss to Louisville in the Orange Bowl, it was Wake’s most successful season as a program. This year’s Wake team has a similar feel, as quarterback Jamie Newman is slinging the ball around the yard to the tune of 319.5 yards per tilt, an output which leads the conference. Newman represents the only double-digit touchdown tosser in the league, finding the paint 12 times against just two picks. Kenneth Walker III is also turning in a dazzling 10 yards per carry for the Deacs, scoring twice.

BC’s Anthony Brown, on the other side, outpaces just Louisville’s Malik Cunningham and Georgia Tech’s passing tandem, slinging for just 198 yards per contest. The Eagles’ punishing run game is as effective as ever, though, as AJ Dillon has sliced his way through opposing defenses to the tune of 117 yards per game, with six touchdowns on the ground. Fellow back David Bailey averages greater than 60 yards per game on the ground on his own, scoring twice in 44 carries.

Countering those strengths will be a tough feat. BC ranks 12th among ACC defenses in preventing air yardage, with foes hurling for nearly 259 yards per outing. Wake fares a bit better against opposing rushers, with its 121.5 yards per contest sixth-best in the circuit. The Eagles galloped for 220 yards on 44 carries against Wake last year, taking down the Deacs, 41-34.

This could come down to special teams. Sophomore Wake Forest kicker Nick Sciba has banged through all four field goal attempts this season, and has connected on his last 15 straight kicks. BC’s Aaron Boumerhi, on the other hand, is just 3-for-5 for the season, and 34-for-48 for his career.

TRIVIA ANSWER:  I asked earlier:  Many schools have creative turnover celebrations. How does Elon University commemorate players who force turnovers?

Let’s go to Elon’s sports information department for this answer.

Struggled with Texas A&M? Did you watch the game? Auburn had a 21-3 lead and let off the gas. That game was not in doubt after the first series. Granted Auburn is not #1.