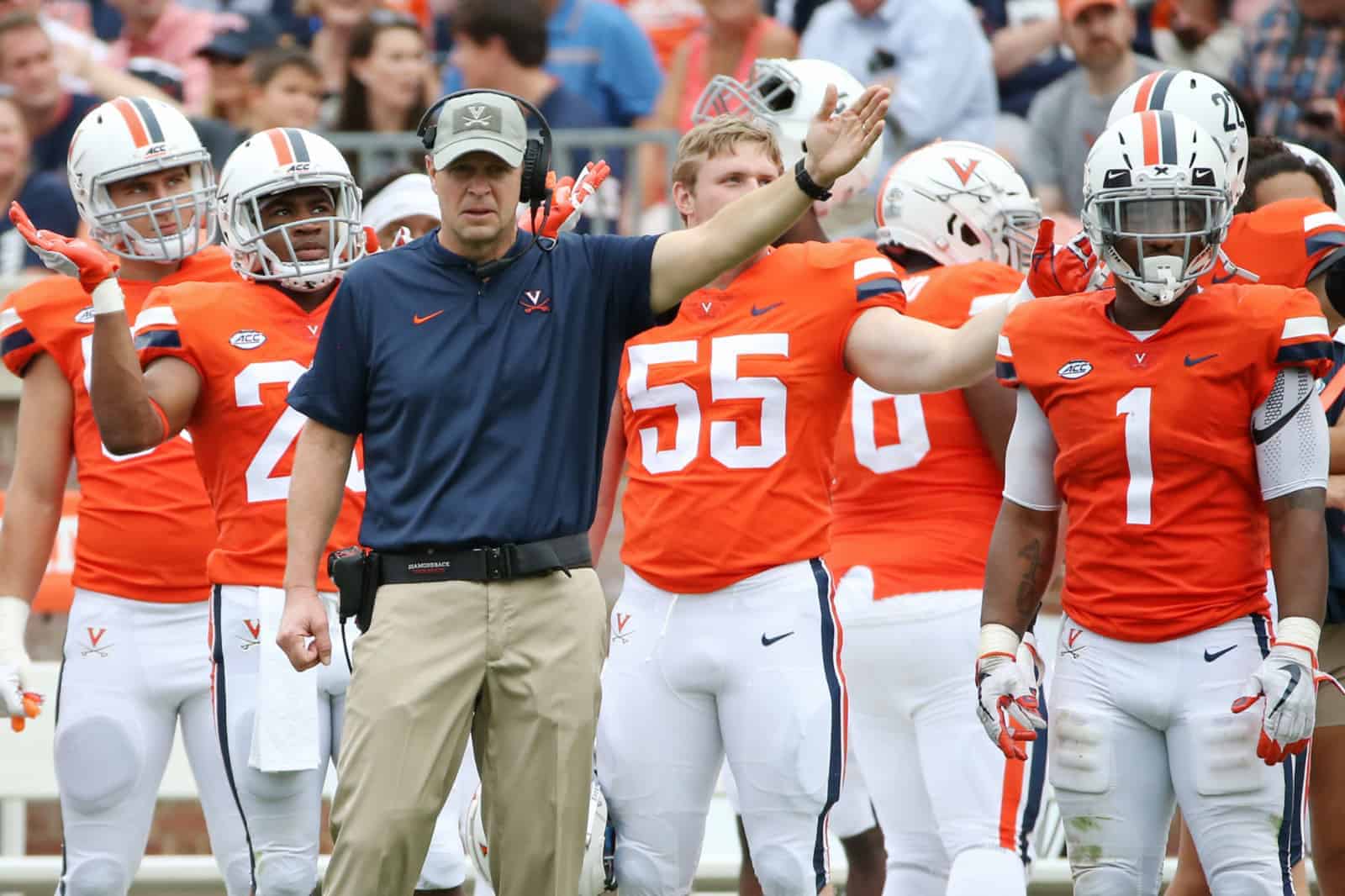 Welcome back, everyone, for another week of Clear Your Schedule! We’ll welcome back an old friend this week — the podcast! You’ll recall the podcast from last year’s installments of this piece, and after overcoming some technical issues — we think — from the start of the year, we’ll return to the normal method of bringing you three games about which to read and three about which to listen!

We’ll also ask this week’s trivia question on the podcast side. If you find you’re wanting to test your trivia knowledge, give us 15 minutes.  We’ll take you through three games, including our FCS Game of the Week!

Before we move forward, let’s look at how last week’s games we featured wrapped up:

Before we move to the written games, here’s the triumphant return of the podcast! Just press play!

Tim’s Tidbits!:  We thought that once our favorite legendary SID, Tim Bourret, stepped down at Clemson, it would be the end of our Tim’s Tidbits feature here at CYS.  It is not, and we’re so jazzed about it that we have two nuggets from the master this week! Take it away, Tim!

Believe it or not, Saturday's Clemson vs. Syracuse game will be just the fourth game in Death Valley (opened 1942) that both teams entered with a perfect record at least 4 games into the season. Others are games vs. NC State 2000, FSU 2013 and Louisville 2016.

Clemson quarterback Trevor Lawrence has 9 TD passes in 60 attempts. He leads the nation in TDs per attempt, min 50 passes.

Rollin’ in my 5-0:  Syracuse is 4-0 for the first time in 26 years, and schedule notwithstanding, this is a significant achievement for Orange coach Dino Babers and his squad. The Orange — well, the Orangemen, at that time — didn’t start the 1991 season 5-0, getting clobbered by Florida State and losing at home to East Carolina to quickly drop to 4-2. They did, however, start the 1987 season 5-0, en route to an 11-0-1 finish. That tie came in the final game of the ’87-’88 season, with Syracuse and Auburn battling to a 16-up draw in the Sugar Bowl.

Won’t the real Syracuse please stand up?:  Everyone wants to talk — and justifiably so — about Syracuse taking down Clemson last year, 27-24. In doing so, the Orange absolutely locked down the high-powered Clemson passing game. Clemson connected on 22-of-32 passes in the game, but threw for just 204 yards without a score. This year’s Syracuse team, though, ranks a paltry 100th in pass defense, yielding 255.3 yards per tilt through the air. One team — the struggling Florida State — has thrown for fewer than 200 yards against the unit this year. One advantage for that defense, though, is that they’ve ripped seven passes on the year, with five coming in the first two games of the year.

Print that, tweet that, whatever:  A Clemson team out for revenge. The quarterback who would want most to avenge last year no longer on the team. This could be a huge win — or devastating defeat — for the Tigers.

Non-stop offense:  West Virginia has become famed for its offensive output under head coach Dana Holgorsen, and this year is no different.  The Mountaineers rank eighth in the land in total offense at just over 545 yards per game, which…sounds pretty good, right? Look about seven spots north on the total offense leaderboard, and you’ll find the Red Raiders. Texas Tech averages 623-and-a-half yards per game, tallying 486 yards or more in every game thus far this season. However, while West Virginia rates 18th in total defense in the land at just over 300 yards per game, Tech ranks a frightening 106th in total defense, surrendering 437.3 yards per outing.

Getting back on the map:  Texas Tech’s sports information department points out a statistic that seems almost impossible to believe. Following a 41-17 Red Raider victory at 15th-ranked Oklahoma State last week, a victory against 12th-ranked West Virginia would give Texas Tech back-to-back wins over top-15 teams for the first time in 10 years. The Red Raiders beat top-ranked Texas and eighth-ranked Oklahoma State in consecutive weeks back in 2008, and have gone six years without defeating ranked teams in back-to-back weeks. Concidentally enough, one of those 2012 wins came against fourth-ranked West Virginia.

Get off the field!:  We talk a lot about the penultimate down in this column each week, but it holds special significance in this game. West Virginia is second in the land in third-down conversions, moving the chains 62 percent of the time (20-of-32). Texas Tech has experienced its share of struggles on defense, which we just chronicled, but it has at least been passable at forcing opponents to punt. Red Raider foes convert on just shy of 28 percent of third-down attempts (17-of-61).

Print that, tweet that, whatever:  This would be a gigantic victory for the Red Raiders, and a step toward reestablishing Tech as a top-tier program. West Virginia is just so skilled on offense, though.

What a difference a year makes:  UVa returned to a bowl game last year, and much of that rejuvenation can be credited to now-Atlanta Falcons quarterback Kurt Benkert. The ‘Hoos added another transfer quarterback in the offseason, and Bryce Perkins has helped guide Bronco Mendenhall’s club to a new level. Perkins ranks 23rd in the nation in total offense, tallying just shy of 300 yards per game. Perkins has also been part of an added dimension in the Virginia offense:  the “chunk” play. As the school’s sports information department notes, of Virginia’s 17 touchdowns on offense this season, 10 have gone for 20 yards or greater, with six traversing 35 yards or more. Perkins has rushed for 78 yards or greater in three of his four games under center for Virginia, so edge contain will be a key assignment for the Wolfpack.

Anything you can do, I can do better:  As great as Perkins has been for UVa, NC State quarterback Ryan Finley has been even more of a stalwart for the Wolfpack. The conference notes that Finley is just the third ACC quarterback to throw for 300 yards or greater in three straight games to start a season since 2000. In actuality, Finley has thrown for 300 or greater in five of his last seven games dating back to last season, with only Boston College and Wake Forest holding the ‘Pack signal-caller below the mark. Virginia’s pass defense is much improved — tied, ironically, for 42nd with BYU in surrendering just shy of 184 yards per contest — but will face quite the stiff test from Finley and the AC’C’s top receiver (Kelvin Harmon, who averages 104 yards per game) in this one.

Do I know you?:  Virginia defeated the Wolfpack, 33-6, in the schools’ last meeting. That meeting, however, came in 2012. Dave Doeren started at State in 2013, so this is his first look at the Cavaliers since arriving in Raleigh. He has seen every other school in the league at least once in his time as NCSU’s coach. The teams have only played four times since 2004.

Print that, tweet that, whatever:  This game will likely come down to which defense blinks last. Will it be Finley’s arm or Perkins’ dual-threat ability?

We’ll see you back here next week! Enjoy your college football weekend — and hey, click that handy little Twitter follow button right below this sentence, will ya?