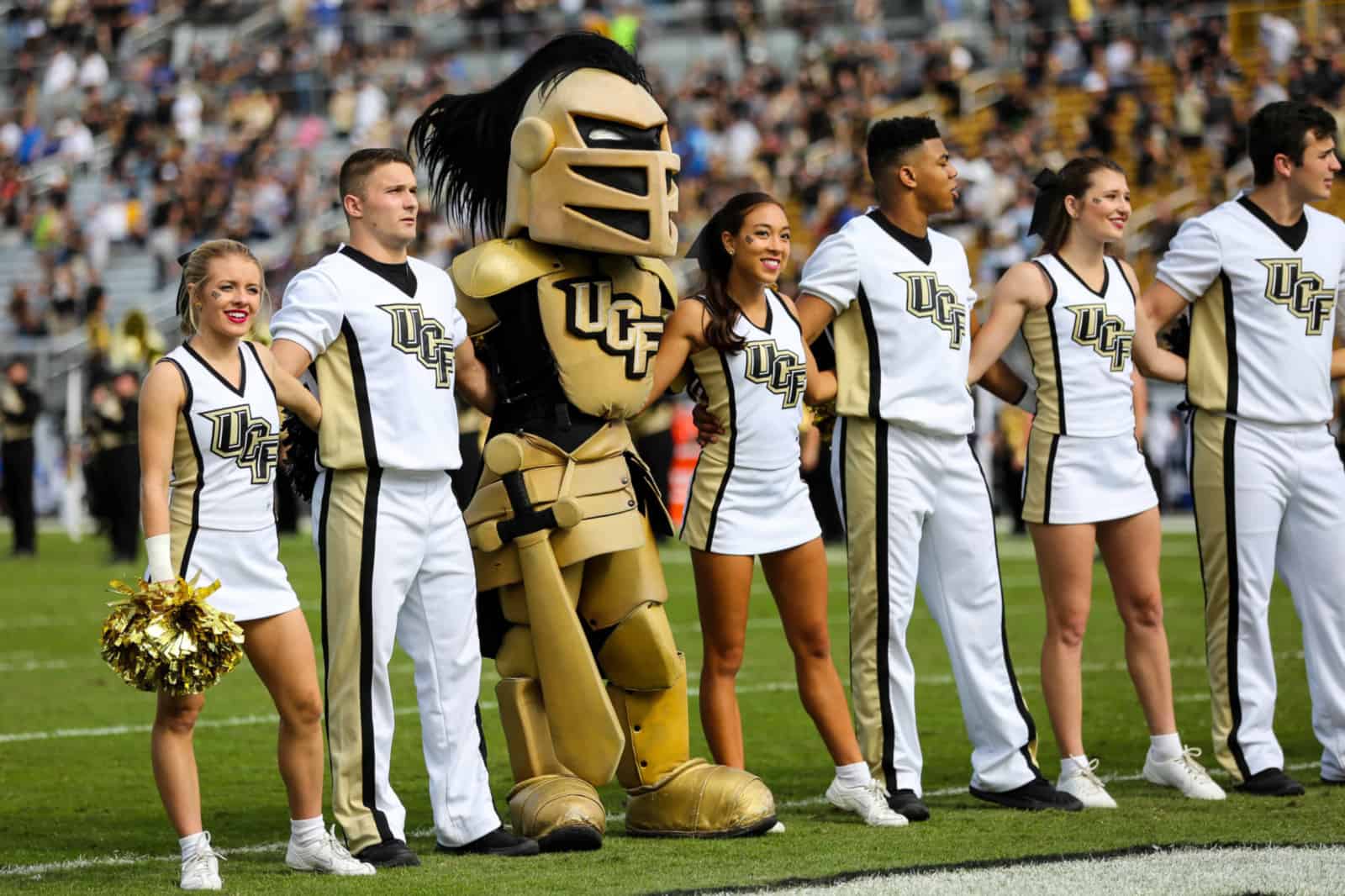 Remember that time, less than a quarter of a year ago, when it was blazing hot outside and we were all anticipating the start of another college football season?

Yeah…neither of those things are still the case. We’re all freezing to death — if not water-logged — and the season, as with this feature for 2018, nears its end.

Yes, friends, welcome to the season finale of Clear Your Schedule. With Thanksgiving approaching earlier than usual next week and bringing with it the end of the season, so too does our time together for the year. We’ll wrap up the year with our usual trivia question, our three games of the week, and our normal brand of fun and frivolity.

Without any further delay, let’s ask this week’s trivia question, then get straight to the action!

Trivia (answer at the end of the column): Cincinnati is the only team who won four or fewer games last year to have won nine or more this year. Three others could potentially reach the nine-win plateau. Who are they?

Rush week: Both teams have solid rushing stats — if not a bit confusing. UCF boasts the second-best rushing offense in the American (271.44 yards per game), but only the ninth-best rush defense in the circuit (208.89 yards). Cincinnati, conversely, has the best rush defense in the league (102.80 – the best by 38-plus yards per game), but just the fourth-best rush offense in the league. Cincinnati boasts the better individual rusher (Michael Warren II, at 108.2 yards per game and 17 scores), while UCF employs a tandem of rushers. Greg McCrae has 673 yards on 76 carries, to go along with four scores. Adrian Killins, Jr., meanwhile, has 114 carries for 546 yards and four TDs. Those eight TDs pale in comparison to Warren’s 17, however.

Totally defensible: We think of these two clubs — and the American in general — as offensively oriented. While this is accurate (both score 35 points apiece or greater per game), both sides sport stout defenses. Cincinnati and UCF are the top two scoring defenses in the league, respectively, with the Bearcats ranking seventh among FBS clubs at 14.9 points per game surrendered. Cincinnati is sixth among FBS clubs in total defense, allowing just 279.8 yards per game. UCF, however, slips to 91st in total defense at 423.6 yards per game. This number comes on the “strength” — if you can call it that — of the Knights’ 105th-best rush defense.

You play…to win…the game: By this stretch of the season, pretty much every bit of analysis that can be done has been done. For this, we thank UCF’s sports information department for adding a bit of levity to the situation. To wit:

Print that, tweet that, whatever: It’s already been established that UCF won’t get a shot to play for a national title. However, if it can get past a loaded Cincinnati team, great things are still ahead.

Parliamentary procedure: The Owls come into this contest just down the road from campus at SunTrust Park boasting two players who received accolades from the Big South Conference as players of the week at their respective positions. Kennesaw running back Darnell Holland won the Offensive Player of the Week plaudit, while linebacker Charlie Patrick was named the Defensive Player of the Week. The conference had this to say about their honors:

Holland rushed for a program single-game record 195 yards on just nine carries in Kennesaw State’s Big South championship-clinching win at Monmouth.  He scored three times on touchdown runs of 9, 46 and 59 yards, and averaged 21.7 yards per carry. Holland was responsible for seven first downs on the afternoon, and personally outgained the Hawks by three yards.

Patrick posted a career-high 14 tackles — including 11 solo — with two tackles-for-loss and two for no gain in the Owls’ win at Monmouth.  Seven of his tackles led to third down situations, while another forced a fourth down play. His 11 solo stops tied the school single-game record, and he anchored a defense that allowed just 68 yards over the final eight drives.

Holland is Kennesaw’s second-leading rusher, tallying 53 carries for 682 yards and six scores. Patrick has recorded 48 tackles (10.5 for loss), a sack, and a forced fumble in 2018.

We are the champions: This tilt is a matchup of two FCS conference champions. Kennesaw won the Big South Conference this season, going undefeated through the league as part of a nine-game winning streak. The Owls have won by an average of 41 points during the string. Jacksonville State, meanwhile, lived up to the preseason predictions by Ohio Valley Conference coaches and media, winning the league with a 7-1 mark. The Gamecocks’ lone league loss came at the hands of 23rd-ranked Southeast Missouri State, who, despite thumping JSU, 37-14, on October 20, finished two games behind JSU in the league standings. This is also a rematch of last year’s second round of the FCS playoffs, in which the 18th-ranked Owls defeated the second-ranked Gamecocks, 17-7, at Burgess-Snow Field at JSU Stadium.

Cool under center: These teams have equally talented quarterbacks, but both are extremely different players who took different paths to reach their success. Kennesaw quarterback Chandler Burks is a bit more like a running back playing quarterback, and is the reigning Big South Offensive Player of the Year. The league coaches and media bestowed the same honor upon him in preseason projections, and Burks is doing absolutely everything possible to reward that faith in him. Though not much of a prolific passer — he’s completed just 55-of-92 passes this season — coach Brian Bohannon’s offense does not require that of him. What Burks does bring, though, is a team-leading 769 rushing yards and a dizzying 26 touchdowns. That total leads the nation by nine.

JSU’s Zerrick Cooper, meanwhile, is a name you’ll likely recognize as a Clemson transfer. Cooper has become a star in his own right as a Gamecock, ranking 24th among FCS players with 270 yards of total offense per game. The redshirt sophomore is 180-for-289 passing for 2408 yards and 23 touchdowns, a touchdown total that places him in the top 10 among FCS passers. Cooper also boasts a big-play threat at receiver in redshirt junior Josh Pearson, who has snagged 53 of those passes for 891 yards, providing 16 of Cooper’s 23 tallied touchdowns.

Design of two decades: It’s really tough to comprehend the fact that Syracuse will take the…diamond…this Saturday with its highest ranking in the polls in 20 years. The Orangemen, as they were still known then, were ranked 11th for an October 1, 1998, trip to Carter-Finley Stadium in Raleigh, which resulted in their being boat raced by an unranked NC State club, 38-17. Paul Pasqualoni’s squad still took the Big East crown that year, losing just one conference affair (by a touchdown at West Virginia). Florida then clubbed Syracuse, 31-10, in the Orange Bowl. The Orange are 5-1 in bowl appearances since that year, but no bowl appearance has been as significant as that year’s game. That could easily change this season.

Giving no quarter: Much of the focus in this game will — rightly — be under center. The two quarterbacks offer quite disparate styles, with Notre Dame’s Ian Book still atop the nation’s leaderboard in pass completion percentage (74.5 percent) through nine games played. Book, remarkably, throws about the same amount of times each game, attempting between 32 and 35 passes in each of the six full games he has played. Equally remarkably, he has completed between 22 and 27 throws in those games.

Eric Dungey, on the other hand, has been much less efficient through the air, with just a 60.4 percent completion percentage and five games with a completion percentage below 52 percent. The senior makes his mark on the ground for the Orange, carrying 13 times or greater in all but two games this season. Dungey has rushed for 690 yards and 12 touchdowns, providing a powerful complement to the Syracuse rushing triumvirate of senior Dontae Strickland (84 rush, 381 yds, 6 TD), freshman Jarveon Howard (60 rush, 298 yds, 6 TD), and junior Moe Neal (119 rush, 716 yds, 5 TD). The Orange are tied with Clemson (32 rushing touchdowns), second only to Georgia Tech’s 43 on the ACC’s rushing touchdowns leaderboard.

We’re not talking about apples: Games this close on paper are often decided on a turnover, and if that comes to pass Saturday, Syracuse owns a decided advantage. The Orange are plus-13 on the season, a mark topped only by Georgia Southern (plus-21), Fresno State (plus-15) and UCF (plus-14). Syracuse has not finished a game with a negative turnover margin all year, which has helped keep Dino Babers’ club in every game it has played. Syracuse is also plus-five in its last three games.

Notre Dame, meanwhile, is just plus-two. The Irish are minus-three over their last four games, and while they are still undefeated, they certainly appear to be dancing in the fire a bit. With a ball-hawking club like Syracuse opposite them, the Irish will need to be careful not to get burned.

Print that, tweet that, whatever: I’m not calling a Notre Dame loss here — I don’t get into that business — but this certainly feels like a game it might lose. A win’s importance could not be understated.

Trivia answer:  I asked earlier: Cincinnati is the only team who won four or fewer games last year to have won nine or more this year. Three others could potentially reach the nine-win plateau. Who are they?

Syracuse, Florida and Georgia Southern all need either one or two wins to close the season in order to reach nine wins this season.

And there you have it, the close of another season for this feature. As always, it’s been a pleasure to talk football with you all year, and you’ll still see me around here from time to time.

May the holiday season bless you and yours. It’s been a trying year for many of us, for one reason or another, and I hope that we can all find time to be thankful for those we love and who love us. Let us appreciate that which we have, including each other.

With that said, it’ll be oppressively hot again before we know it, and we’ll be set to do this all over again. Soon, we’ll have spring practices and the irrational freakouts they bring, and a few months after that, we’ll tee it up for real.

Join me back here again next fall for season eight of this feature, will ya? Until we kick it off in 2019-20…Clear Your Schedule.