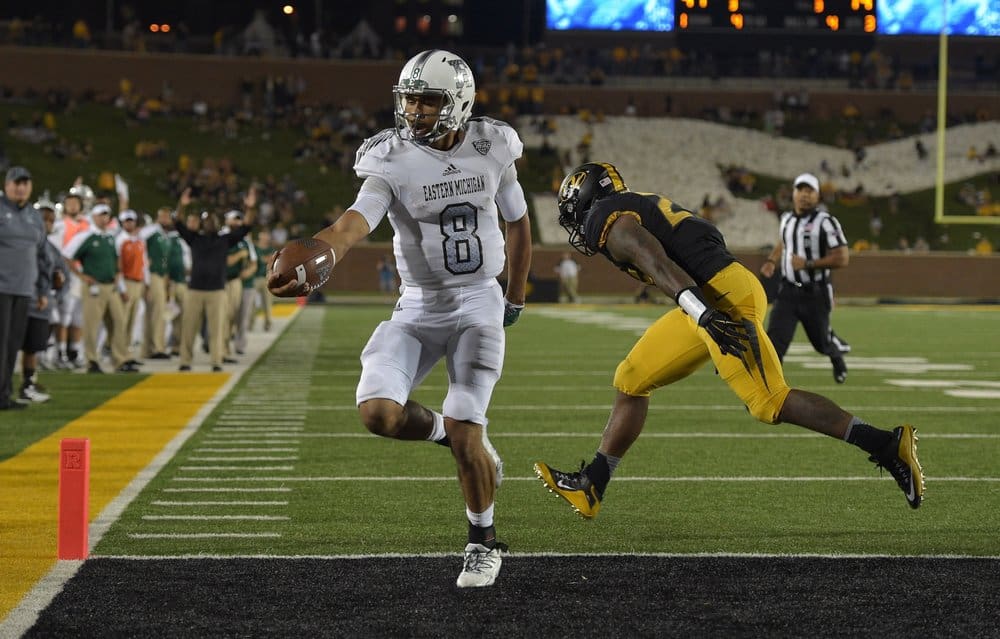 Eastern Michigan has won four of its first five for the first time in a generation. (Denny Medley-USA TODAY Sports)

I know this is a space for college football conversation, and I’m fine with that, but I hope you’ll indulge me in one final goodbye to one of the most important figures sport — or this world — will ever know.

Vin Scully was for me, as likely most of you, the soundtrack of my youth. From calling weekly games on NBC to being the eternal voice of Dodger broadcasts, I was one of three or four generations who so loved this humble man, and I’ll always remember watching baseball with my grandfather, my dad, or both, and hearing Vin’s voice. There are so many voices that made me so love sport — Pete Van Wieren, Skip Caray, Jack Buck, Ernie Harwell, and now Vin, to name a few — that have gone silent, either through passing or through richly-earned retirement.

Thank you, Vin. For everything. (Also, try watching this — and what he said after it — without tearing up. I dare you. Even if you’re a man of (mumble) years old, like I.)

We can’t really top that, so let’s just move on to trivia. Oh, and if you’d like to make your picks and haven’t done so already, join us at this link.

Trivia, Week 6 (answer at the end of the column): Vin Scully’s first-ever play-by-play call actually came behind the microphone of a college football game. Which game did he call, and when did he call it?

Print that, tweet that, whatever: If Navy can run and control the clock, this could be a classic. They can’t afford to need to throw, though –they’re 121st in the FBS in passing.

Print that, tweet that, whatever: Even if Toledo gets the win here — which they should — the real takeaway here is that EMU is again quite relevant in the MAC.

Print that, tweet that, whatever: Tech is ahead of schedule, according to most pundits, and they’ll hope to catch Carolina on its “heels” after last week’s thriller at FSU.

Print that, tweet that, whatever: Tennessee possesses the somewhat inexplicable stat of being 3-0 in games where they’ve trailed by 14 or more. Don’t look for that to repeat.

Print that, tweet that, whatever: Bret Bielema has restored the Razorbacks’ winning ways. It will take total dominance from Arkansas’ high-octane offense to win here, though.

Print that, tweet that, whatever: This is Miami’s chance to make a national statement and leapfrog their in-state rival in doing so. Don’t look for FSU to roll over, though.

Trivia answer: I asked earlier: Vin Scully’s first-ever play-by-play call actually came behind the microphone of a college football game. Which game did he call, and when did he call it?

Finally, to those of you in the path of Hurricane Matthew, please stay safe and heed the recommendations of local officials. This storm may impact a number of our readers — including me — and it is my sincere hope and prayer that we can all escape this with minimal damage and all meet back here next week to talk more college football. All my best.

EMU photo, included in the text, and Ernie Howell mention – I think we’ve spotted the alum.