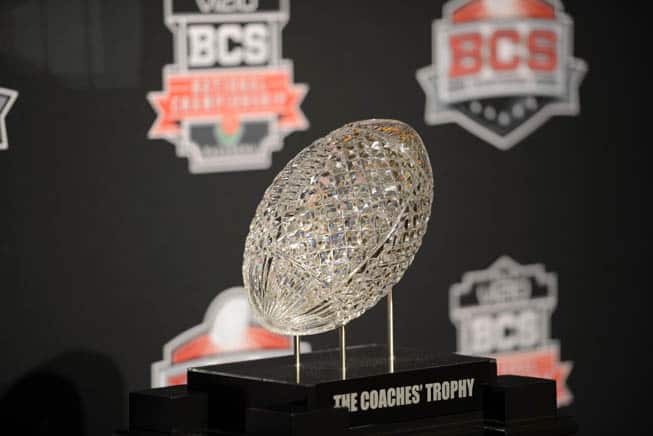 And then there were two.

Okay, so maybe not so much on the last one.

The final official BCS National Championship Game features an extremely intriguing — if not entirely anticipated — matchup. Sure, many could have seen Florida State taking the field in Pasadena as they continued to rack up dominating defeats throughout the ACC schedule. The Seminoles and their Heisman-winning quarterback knifed through their 2013 slate on the way to reach their first national title game since their 2001 appearance against Oklahoma. Florida State, of course, defeated Virginia Tech in 2000 to win their most recent national title.

Auburn’s last appearance in the national title game came just three years ago, when Cam Newton and the Tigers defeated Oregon 22-19. Their path to this year’s game, though, was nowhere near as obvious. One need only look at the predictions from this season’s SEC Media Days to arrive at this conclusion. Auburn received exactly zero votes to win the SEC Championship. The assembled media picked the Tigers to finish fifth in the SEC West, ahead of only Mississippi State and Arkansas. Whether you believe Auburn grew under first-year head coach Gus Malzahn, lived with a horseshoe in their pockets — or maybe even both — it is safe to say that the team seen by many as greater than a 200-to-1 shot to win it all before the season was not expected to be here.

In just over 24 hours — and 60 minutes of game time — we’ll have a champion to cap off a wild season of college football. Can the SEC continue its recent run of dominance, or will the ACC have its first national champion since — interestingly enough — the Seminoles in 2000? Before we break down the game, it’s time for the final trivia question of the 2013-14 season!

2014 BCS National Championship Game Trivia (answer at the end of the article): Auburn won the most recent contest between the Tigers and Seminoles 20-17 on October 20, 1990. In which bowl games did each team play in the 1990 season?

Thoughts: The Seminoles enjoy an irrefutable advantage in this category, led by Heisman winner Jameis Winston. Winston eclipsed the 300-yard mark seven times this season, including a blistering 444 yards in a 22-for-34 performance at Clemson on October 19. Winston is also a top-ten performer nationally in completion percentage (67.9 percent). No other quarterback in the nation enjoyed a greater yards per attempt average (10.9).

In an interesting parallel to the Tigers’ 2010 championship run, Auburn is again led by a junior college transfer who came from another SEC school. Nick Marshall may not have the flashy statistics of his counterpart, he is certainly effective at managing a game. In Auburn’s final three games this season — all against ranked opponents — Marshall completed 35-of-53 passes for 458 yards, throwing for four touchdowns without being intercepted. Marshall also helms Auburn’s ground game, carrying 156 times for 1023 yards and 11 scores. Marshall rushed for greater than 100 yards in four games.

Thoughts: As great as Florida State’s advantage may be in the passing game, Auburn’s is just as great on the ground. As Auburn Gold Mine reports, Tiger running back Tre Mason (1621 yards, 22 TD) carried for 778 yards and eight scores in four games against top-ten opponents. Mason rushed 46 times for 304 yards and four touchdowns in the SEC Championship against Missouri. The Tigers rushed for greater than 200 yards in all but one game this season, eclipsing the 400-yard barrier four times and 500-yard mark twice. Gus Malzahn’s club has rushed the ball at least 36 times in every game this year. Auburn rushed 183 times for 1164 yards and six scores in their final three games against Georgia, Alabama and Missouri.

Running backs Devonta Freeman (943 yards, 13 TD), Karlos Williams (705 yards, 11 TD) and James Wilder (542 yards, 8 TD) have ruled the Seminole rushing attack. Florida State has played just two games against ranked opponents, rushing for 180 yards per game in those contests. Florida State has rushed for greater than 300 yards twice, including their season-high of 377 yards in a 62-7 victory over Nevada. The three backs have combined for five 100-yard games this season.

Thoughts: Auburn has some clear concerns in stopping the run. This much should appear quite obvious. The Tigers have allowed an average of 189 yards per game against SEC competition, surrendering 15 rushing touchdowns. All but two teams have rushed for over 100 yards against Auburn, including six opponents having bettered the 200-yard mark. Auburn has allowed 16 rushing touchdowns in the red zone this season on 63 carries.

The Seminoles have allowed just five rushing touchdowns — period, not in the red zone — this season. One of those rushing touchdowns has come since the beginning of November, that coming when Duke scored in the waning seconds of the ACC Championship Game. Six FSU opponents failed to reach the 100-yard mark on the ground, including Maryland’s 25-carry, 33-yard outing on October 5. The last team to rush for 100 yards against Jimbo Fisher’s team was Syracuse (143 yards) on November 16.

Thoughts: Auburn’s struggles in the rushing game have been chronicled, but they face even greater challenges through the air. Four teams threw for fewer than 200 yards against Auburn; however, five teams threw for greater than 300 yards. The Tigers surrendered eight touchdowns through the air in the aforementioned final three games, with their opponents in those games throwing for 995 yards.

Florida State has nearly doubled Auburn’s interception total (25-13), and leads the nation in defending the pass. Though Auburn is not as likely to throw, as has been chronicled, it is important to note the Seminoles’ success in this statistic. Only four schools (Pittsburgh, Maryland, Clemson and Idaho) have thrown for greater than 200 yards against FSU, all in blowout games. Needless to say, Auburn cannot afford to let Florida State jump out to an early lead, as their lack of a passing attack — and FSU’s ability to defend the pass — would not bode well for the Tigers’ chances.

Before we close, allow me to thank you all for sharing your weeks with us here at FBSchedules, and with me for the Clear Your Schedule series. Your readership and comments each week are tremendously appreciated, and you help make this site what it is. We look forward to year three of Clear Your Schedule starting this coming August, and to interacting with you all between now and then!

Trivia answer: I asked earlier: Auburn won the most recent contest between the Tigers and Seminoles 20-17 on October 20, 1990. In which bowl games did each team play in the 1990 season?

Auburn defeated Indiana 27-23 in the 1990 Peach Bowl in front of 38,912 fans at Atlanta-Fulton County Stadium. Florida State won 24-17 over Penn State in the Blockbuster Bowl in Miami.

Florida State’s Casey Weldon (20-for-30, 244 yards, TD) was drafted by the Philadelphia Eagles in the fourth round of the 1992 NFL Draft. Fellow Seminole Brad Johnson (3-for-5, 14 yards, INT) was a ninth-round selection by the Vikings in that same draft. Auburn quarterback Stan White (12-for-28, 97 yards, 3 INT) went on to make the New York Giants’ roster, though he never attempted an NFL pass.

Very detailed critique of this game,with all the stats provided that anyone can want.It seems to me that it comes down to Fla.St.being able to stop the run,and Auburn stopping the passing game.If Auburn controls the running game,time of possession,turnovers,and points per possession,they win.Otherwise,the horseshoe ends up tarnished.

National Chmapionship controversy in on the way.

There could be five one-loss teams this season:

Great Game, also the possible winning touchdowns with lots of laterals by Auburn would have been nice