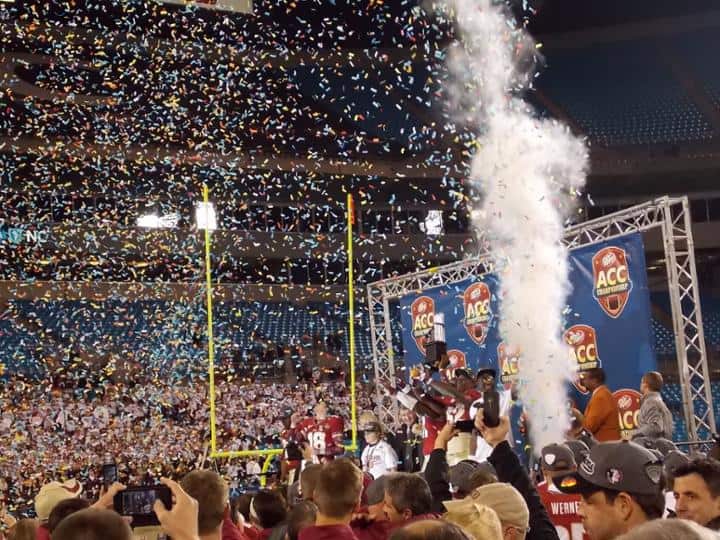 It’s that time again, everyone.  Just miles away from the Palmetto State FBSchedules offices, the ACC will tee it up in Charlotte Saturday night, and we survived quite a bit over these last three months.  Florida State survived challenge after challenge — and a skeptical College Football Playoff committee — to turn in yet another undefeated season.  The Yellow Jackets survived #OperationACCCoastalChaos to score a return trip to the Queen City.

This is a rematch of the 2012 championship game, in which the Seminoles emerged victorious by a 21-15 score.  Jimbo Fisher’s club hauled in the interception of a Tevin Washington pass that sealed the game.  (In a tidbit about which no one cares but I, your humble correspondent witnessed the pick from field level.)  The Ramblin’ Wreck completed just 5-of-16 passes for 91 yards in the contest.  These are markedly different teams now — Georgia Tech, especially — but there is precedent between these two teams on the Bank of America Stadium grass.

The Seminoles were the prohibitive favorites to most that night — they are a little bit less so on this night, favored by fewer than five points — and drama exists on both sides.  Can Florida State take their fourth consecutive title (and fifth in the last six years), or will Georgia Tech ruin FSU’s spot in the first-ever College Football Playoff and hold the hardware for the first time in the 2010s? There is much to ponder — and no, not the former Seminole quarterback — and we’ll do it right after this trivia question.

2014 ACC Championship Trivia (answer at the end of the column):  Which current Florida State running back secured the game-winning interception against Georgia Tech in the 2012 ACC Championship Game?

Info guide:  These two schools are absolutely offensive juggernauts, which explains their appearance in this game.  The Jackets are tops in the ACC in a number of offensive categories, including points per game, total offense, rushing offense and sacks allowed.  The Seminoles lead the pack in passing offense, throwing for just shy of 300 yards per game behind Jameis Winston.

Georgia Tech’s five-game winning streak has featured a considerable amount of offensive success, as well.  Tech has totaled 72 plays or greater and 409 yards or greater in four of the five games in the streak, including a season-high 612 yards against Pittsburgh in the first game of the run.  Florida State, on the other hand, gained 313 yards or fewer in three of the four games in November.  The ‘Noles offense was also on the field for 70 plays or fewer in three of those four contests.

The defenses have been quite another story.  Florida State and Georgia Tech are 10th and 12th (respectively) in the conference in total defense.   The Jackets rank 10th or lower in all but one defensive category, while the Seminoles suffer the same fate in four of seven major defensive statistics.  Florida State faced a reasonably similar offense in Boston College two weeks ago, surrendering 240 rushing yards (313 total) in a 20-17 victory.  The Jackets have allowed fewer than 284 total yards in a game just once this season, a 190-yard effort by a banged-up Clemson team that lost Deshaun Watson early on.

Florida State desperately needs productivity from their rushing game.  Jimbo Fisher’s club is 13th in the ACC (101st in the FBS), carrying for just 131.2 yards per game.  They have a great opportunity in this one, as Tech’s rush defense is just 70th-best in the nation.  Opponents have rushed for nearly 168 yards per game against Paul Johnson’s Ramblin’ Wreck.  Virginia’s paltry 22-yard rushing effort skews the success opposing rushers have had against the Jackets — even during their winning streak — but the 131 or greater yards put up by the other four opponents during the streak give the Seminole rushers hope.  Florida State has gone for 110 yards or greater on the ground in each game since a 50-yard effort against Notre Dame.

I mentioned in last week’s Clear Your Schedule that the kicking game would be a key, and Harrison Butker’s 53-yard blast against Georgia certainly turned the tide.  The Jackets now face off against the nation’s third-most accurate kicker in Roberto Aguayo.  Aguayo has converted 91.7 percent (22-of-24) of his kicks this season.

Turnovers will also be an item to watch.  FSU is tied for 91st in the nation in turnover margin, with a negative margin (-0.33 per game).  The Seminoles were -3 in November, with Jameis Winston throwing 12 interceptions over his last six games.  Georgia Tech has the best turnover margin in the conference (0.92), which has them tied for tenth in the nation.  The Jackets have 123 points off turnovers this season, which is fourth among FBS teams.

The Seminoles can bypass Clemson for the most ACC titles in history with a win.  Both teams have 14 championships.   Georgia Tech could take home their fourth.

Print that, tweet that, whatever:  FSU looks to quiet the doubters — and there are many.  Georgia Tech looks to cap an historic season.  This should be a great one.

Trivia answer:  I asked earlier:  Which current Florida State running back secured the game-winning interception against Georgia Tech in the 2012 ACC Championship Game?

Karlos Williams snared the Tevin Washington pass and returned it to the Georgia Tech four-yard line.  The 41-yard pick was the only interception of Williams’ two years in the defensive backfield.  He has since gained greater than 1300 yards and scored 21 rushing touchdowns.

Living on the edge and waiting until the last minute will not work for FSU this time. If they don’t play hard with very few mistakes for the whole game Georgia Tech will beat them.

If Ga.Tech can control the tempo of this game,and eat clock with their ground game,this could be a very close game and perhaps an upset.The longer FSU has to keep their offense off the field,the worse it looks for the ‘Noles’.At some point,someone on the defensive side has to make a play,and I predict that the Jackets will be the ones to do so.

No Style Points are required for FSU to enter the College Football Playoffs. Florida State wins and they’re in. Depending on results of other conference championship games and a loss would surely knocks them out, even with only the one loss. I personally could care less who wins, I just want a good game from both teams. Seeing a quality game played by both teams this season has been rare, perhaps we’ll get to see some this weekend.