Cincinnati to play at Michigan in 2017 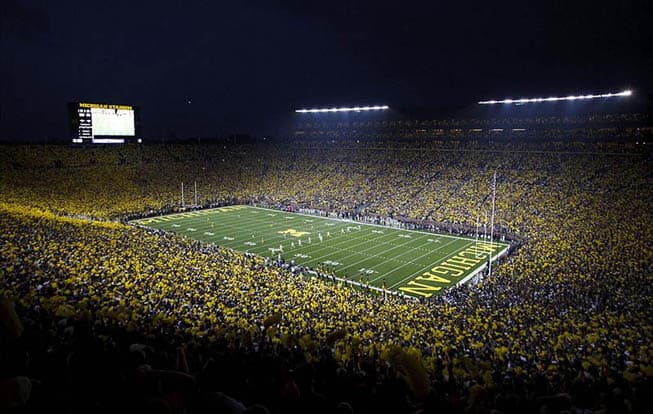 Cincinnati will play at Michigan in 2017. Rick Osentoski-USA TODAY Sports

Cincinnati is headed to the Big House! Cincinnati and Michigan both announced today that the Bearcats will take on the Wolverines at Michigan Stadium in Ann Arbor on Sept. 9, 2017.

Although Cincinnati has been playing football since 1885 and Michigan since 1879, the two have never met before on the gridiron. The Bearcats will receive $1.2 million for playing the game.

Accompanying the football game is a two-game, home-and-home series in basketball. That will take place between the 2015-16 and 2018-19 seasons.

“It is ideally our preference to sign home and home non-conference games,” UC director of athletics Whit Babcock said. “However, the chance for our fans to have a relatively short drive to see us play a great opponent, plus the men’s basketball scheduling component above and beyond the single football game in Ann Arbor, made it a good one-off decision for us.”

Cincinnati now has two games scheduled for the 2017 season. The Bearcats also travel to face in-state rival Miami (OH) on Sept. 16. Other schools featured on their future schedules include BYU, Illinois, Ohio State, and Purdue.

The Bearcats are the first scheduled opponent for Michigan in 2017. Other BCS programs that Michigan will face in the future include Arkansas, Colorado, Notre Dame, Oregon State, UConn, and Utah.

“Ohio is a state that all our sports programs recruit heavily, and the Cincinnati area has been terrific recruiting territory for Michigan Athletics through the years,” said Michigan director of athletics Dave Brandon. “We are excited to host the Bearcats and their fans at Michigan Stadium and Crisler Center in the coming years and look forward to making a visit to Cincinnati for basketball.”

If Michigan is willing to pay this much for a single home game versus a pretty good Cincy program, it’s a sign that Big 10 schools are seriously committing to getting FCS teams off of the schedule. I was skeptical when Alvarez made his statement on FCS team earlier this year, but this is a good sign. BTW, $1.2 million for a team like Cincy could be a bargain in 2017. Nebraska had to pay $1 million to play much lighter-heralded Ark. State this year.

My guess is there will still be some FCS teams on the schedule, especially for teams like Illinois, Indiana, Minnesota, etc. who need to qualify for a bowl game.

Kevin, I hope the B1G starts a trend of not scheduling FCS teams and other conferences start following. So I pray that the lower ranked teams in the conferences follow it as well…

yeah but why michigan cnt travel to the queen city 4 home n home. they can play in paul brown st. like the buckeyes did. yes forget fcs teams that only shows how weak you is playing teams like that.