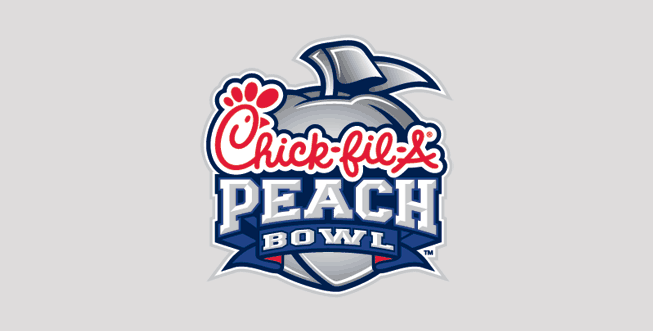 ATLANTA (April 21, 2014) – Today, the Chick-fil-A Bowl became the Chick-fil-A Peach Bowl once again, and a new era for post-season college football in Atlanta officially began. The Bowl’s announcement was amplified by the news that Chick-fil-A has become the first of the new College Football Playoff bowl sponsors to announce its new agreement with ESPN.

The name change and new logo come as a direct result of the Bowl’s inclusion in the College Football Playoff where the use of a traditional moniker is required for the six top-tier bowls that will host the playoffs.

“This is a remarkable day in our history when we can all come together as partners to celebratethese milestones,” said Gary Stokan, Chick-fil-A Peach Bowl president and CEO. “This not only represents the beginning of our new era in the College Football Playoff, but a reconnection to our history and tradition by bringing the peach back into our name.Chick-fil-A’s agreement with ESPN and the Bowl allows us to continue a 17-year relationship regarded as one of the most successful in the industry.”

The six-year agreement between Chick-fil-A and ESPN, the rights-holder for the College Football Playoff, grants Chick-fil-A exclusive title sponsorship of the Peach Bowl and provides additional sponsorship considerations within the framework of the other five College Football Playoff bowls and the national championship game. The deal will also result in an increased presence throughout the year across the ESPN family of networks and ESPN digital platforms with an emphasis on college football programming.

“Chick-fil-A has had the privilege of playing a role in the Bowl’s growth over the last 17 years, helping raise the profile of the game,” said Steve Robinson, Chick-fil-A executive vice president and chief marketing officer. “We now look forward to helping the Chick-fil-A Peach Bowl elevate to a national stage.”

“From Kickoff to Playoff, Chick-fil-A’s continued collaboration and multimedia investment in the College Football Playoff, through our Chick-fil-A Peach Bowl partnership, will help serve our fans and their customers the true excitement of this new era in college football,” said Ed Erhardt, president of global customer marketing and sales at ESPN.

Beginning this season, the Chick-fil-A Peach Bowl will join the Cotton, Fiesta, Orange, Rose and Sugar Bowls in making up the group of six bowls that will host the new College Football Playoff.

The Chick-fil-A Peach Bowl is set to host its first national Semifinal Game (#1 vs #4 or #2 vs #3) following the 2016 season and will host games in 2014 and 2015 featuring top-ranked teams as assigned by the College Football Playoff Selection Committee. The Bowl will host a Semifinal game every third year over the first six years of the College Football Playoff. The Chick-fil-A Peach Bowl has already announced its intent to lead the bid for, and help win the rights to host, the National Championship Game following the 2017 season, coinciding with the opening of the Falcons’ new Atlanta stadium.

“The College Football Playoff is thrilled to welcome the Chick-fil-A Peach Bowl into its top tier of bowls that will help us host the National Semifinal games,” said Michael Kelly, chief operating officer for the College Football Playoff. “There is no doubt the Chick-fil-A Peach Bowl belongs in this elite groupbased on its commitment to community outreach and a first-class fan and student-athlete experience.”

As a member of the top tier of all college bowls, the Chick-fil-A Peach Bowl’s national profile will get a bump – a bump that is expected to be felt by its host city of Atlanta as well.

The elevated profile of the game, coupled with the higher-ranked teams the bowl will host and the increased demand for tickets, is expected to raise projections for the Bowl’s annual economic impact on Atlanta’s hospitality industry. Over the last 10 years, the Bowl has delivered an annual average economic impact of $31.1 million with an average of $1.4 million in direct tax revenue being generated.

The Chick-fil-A Peach Bowl has recorded a string of 17 consecutive sellouts and has earned a reputation as one of the most competitive bowls in the country, with 56% of its games being decided by a touchdown or less. The Chick-fil-A Peach Bowl has disbursed more than $125 million in team payouts over its 46-year history and has increased team payout every year since 1996. The Bowl also leads all other bowl games in charitable and scholarship contributions, giving more than $16.3 million to organizations in need since 2002. The Chick-fil-A Peach Bowl was a 2008 winner of the Atlanta Business Chronicle’s Philanthropy Award and was named a Top 300 Businesses of the South in 2011 by Business Leader Media.

About Chick-fil-A, Inc.
Atlanta-based Chick-fil-A, Inc. is a family owned and privately held restaurant company dedicated to serving the communities in which its restaurants operate. Credited with inventing the chicken sandwich, Chick-fil-A serves nutritious, freshly prepared food in more than 1,800 restaurants in 39 states and Washington, D.C.

Founded by S. Truett Cathy in 1967, Chick-fil-A produced sales of $5 billion in 2013. Chick-fil-A was recognized in 2013 as one of America’s “Most Inspiring Companies” by Forbes Magazine and “Best Places to Work” by Glassdoor™, among other honors. More information on Chick-fil-A is available on the chain’s website, located at www.chick-fil-a.com.

really should have never left the name.

it’s always been Peach Bowl to me…

Old logo, New logo; who cares? Chik-Fil-A is still a very hateful company. I have no idea why the NCAA even partners with them and their hateful philosophies.

Too bad most of us don’t agree with you. CFA is a company not a human being, and therefore cannot :hate:

Loving people & champion heterosexual marriage is not HATE by any stretch of the imagination .

Please explain just who or what they hate, or is that just you’re feeble definition of hate when someone expresses an opposing viewpoint.

Also, the Chick-Fil-A company is not as religious as they claim…at least not when it comes to the Ten Commandments. They bear False Witness when they claim, as they do in the Peach Bowl Pres Release, that they invented the Chicken Sandwich in 1946. Chicken Sandwiches actually appeared in a 1909 cook book. http://books.google.com/books?id=qTIEAAAAYAAJ&pg=PA82#v=onepage&q&f=false

Obviously Bill(s) you have never worked for Chik-fil-A. And since when did stating a moral belief different from yours become hateful? Shame on you!

Why would you even consider the Peach when it’s owned br Chik-fil-A, who hates and discriminates against all GAYS and LISBESONS!!!!!! Can’t believe you chose HATE Peach Bowl. Sure hope no one like Michael Sam came out of the closet when he played for Missouri. What goes around comes around. 70-year old woman by name of Brenda who has been married for almost 47 years to a great MAN!!!! Shame on you, Bill, and on your committee. Still in SHOCK!!!!!!!!

I hate when people hate against LISBESONS