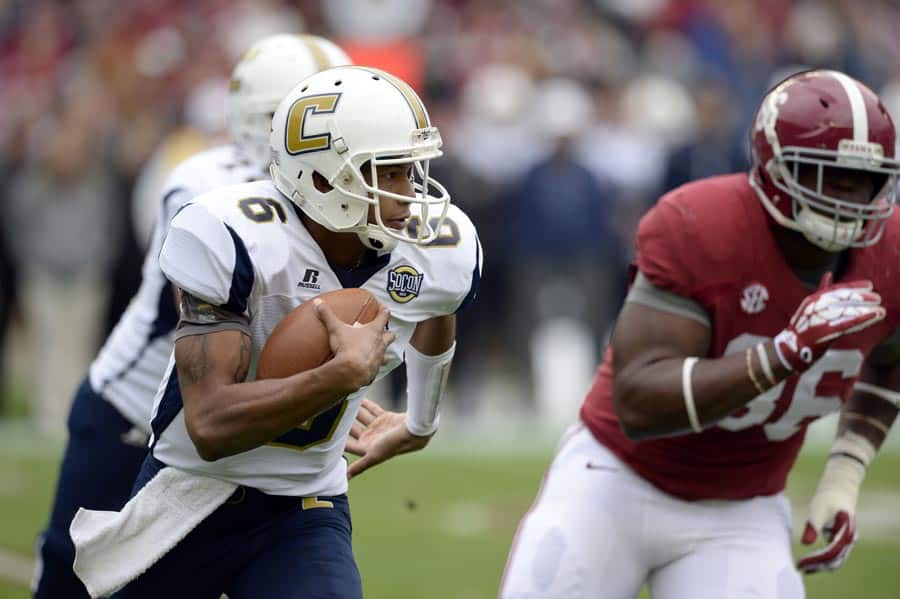 The Chattanooga Mocs will play at Alabama in 2016 and at Kentucky in 2018, UTC’s official football media guide confirms.

The two matchups were first reported in July by Chattanoogan.com, but exact dates for the two games were unknown.

Chattanooga will travel to face Alabama at Bryant-Denny Stadium in Tuscaloosa on Nov. 19, 2016. Alabama and Chattanooga last met in 2013 in Tuscaloosa, where the Crimson Tide won 49-0 to extend their series lead to 12-0.

The addition of the Mocs completes Alabama’s 2016 non-conference football schedule. Alabama is slated to open the 2016 season against USC in Arlington on Sept. 3 and also host Western Kentucky on Sept. 10 and Kent State on Sept. 24.

On Nov. 17, 2018, Chattanooga will travel to play Kentucky at Commonwealth Stadium in Lexington. The game will be the first ever meeting between the two schools.

Kentucky now has two non-conference games scheduled for the 2018 season. The Wildcats also have a road game at in-state rival Louisville on Nov. 24 to close the regular-season.

The Chattanooga Mocs are a member of the Southern Conference (SoCon) in the FCS. Last season, the Mocs finished 10-4 overall and 7-0 in conference play to advance to the FCS Playoffs. Their, they defeated Indiana State 35-14 at home but then fell on the road at New Hampshire 35-30 in the Quarterfinals.

The mighty SEC loading up on more FCS schools while still being too cowardly to play a 9 game conf schedule, despite it being asinine not to with 14 teams. They would rather play FCS cream puffs more than play 6 members of their conference twice in 12 years.

Awaiting a reply from Day, the self annoted VP of Spreadng SEC Gospel.

Well, they start against the drunken sailors, erm, coaches of USC, and then they have to end every stinkin’ season with Auburn. What other P5 school would want that task year after year? (Haha.)
.
At least Chattanooga is playoff-caliber FCS. They’d probably beat half of the Sun Belt and MAC.

You mean Auburn a team that is medicore(look at the last 10 years) unless they find a criminal thrown out of another school to be QB. Yes, there only good recent years are lead by the criminal Scam Newton and criminal Marshall both thrown out of other schools for their criminality.

No gospel spreading, it is what it is, I have no control over the scheduling just like I have no control over people whining & crying over a 9 conference schedule which in some cases doesn’t matter anyway. If you’re good, you’re good, done deal! I don’t think that 9th game between Alabama & Vandy or Kentucky & Texas A&M is going to to set the world on fire, fill up the stadium, set TV records but that’s just me. One day the SEC will go to 9 or 10 game schedule, until then people can just hate & talk about cupcakes & creampuffs in which all conferences schedule for easy wins.

As David said above Chattanooga isn’t a bad squad compared to an Idaho or Eastern Michigan, but that doesn’t mean that the SEC should not move to a 9-game schedule – it absolutely should. I’d like all teams to move to 13 games and play a 10-game conference schedule, though.

Still trying to get a SEC team at a Big10 school in late November.

The Big 10 teams only play in conference at the end of the year, plus with the weather, Big 10 don’t want to play Big 10 in late November so why would the SEC want to play up north? There is a reason why bowl games are normally played in southern climates.