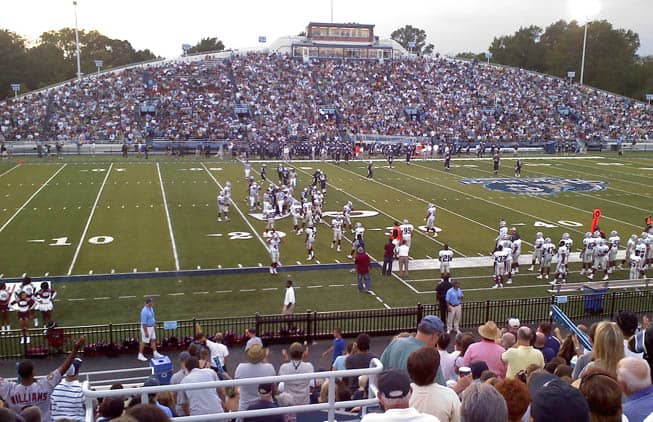 Charlotte will not play at Foreman Field in 2013. (Image via Wikimedia Commons)

The Charlotte 49ers have pulled out of their 2013 football game at the Old Dominion Monarchs, Harry Minium of The Virginian-Pilot has reported.

According to the report, Charlotte notified ODU earlier this week and the cancellation was just revealed at the Conference USA Media Day today in Irving, Texas.

The game was slated to be played at Foreman Field in Norfolk on Nov. 16 and was set for a broadcast on Fox College Sports (FCS) at noon ET.

The 2013 game was part of a home-and-home series that was to conclude in 2014. But just last week, Old Dominion canceled the Oct. 25, 2014 game in an effort to strengthen their schedule. That apparently caused a scheduling dispute between the two schools and C-USA commissioner Britton Banowsky was even asked to mediate.

Old Dominion now has less than four months to schedule a game for the open Nov. 16 date. ODU also has open dates on Oct. 12 and Nov. 30.

Meanwhile, sources told The Pilot that Charlotte had already lined up an FCS opponent for Sept. 21 before canceling the 2013 game at Old Dominion. That game is apparently at James Madison, according to David Teel of the Daily Press.

The 2013 football season will be the first on the field for Charlotte’s program. They will compete as an FCS Independent for two seasons before moving up to the Football Bowl Subdivision in 2015 and joining Conference USA.

Old Dominion will be classified as an FCS Independent for the 2013 season. They are moving up to the FBS in 2014 and will play a full Conference USA schedule.

Charlotte has replaced the canceled Old Dominion game in 2013 with a game at James Madison on Sept. 21.

Old Dominion has replaced the canceled game with a home game vs. Campbell on Nov. 16.

As we reported earlier today, Old Dominion has added a 2014 home game against Eastern Michigan on Sept. 13 and will play at EMU on Sept. 5, 2015.

The Virginian Pilot also reports that ODU will play at Vanderbilt on Nov. 1, 2014.

who cares! nobodies canceling games with nobodies makes for a slow news day.

So why comment then? Apparently it is only newsworthy, in your eyes, if say….Florida cancels with Texas, or something along those lines?

Guess what douchebag, some of us do care. So take your comment and go sit on it and rotate.

This is becoming a shtick for you, and it got tiresome after about the first post. This is FBSchedules, not “FB Schedules That Nampa Native Cares About.”

Seems childish on the part of Charlotte when they would still have one year to fill the date and they will be playing one another every year in the USA. This especially, from an upstart program. Hmmm … or uppity program.

Oh, does the ODU stadium not look just like Spartan Stadium in San Jose? At least, from the side we can see in the photo.

I think they are incorrect. All the ODU beat writers say FCS Independent, which is the final step up to the FBS from FCS.

Seems like there is already plenty of bad blood between these two programs even before they start competing in the C-USA East. ODU might be able to get a game with New Mexico St that week–the Aggies have an open date but would have to dump DII to FCS transition program Abiliene Christian to do it.

NMSU, like most schools, has too much class to dump a team on such short notice. (Are you listening Charlotte?)

True fans of college football do care about all teams and news. I have my favorites: Miami, Arizona State and Marshall but I enjoy all college football. I hate these guys that comments all the time about who cares. Well, lots of people enjoy all teams and all conferences not just the ones that are winning at the this moment in time!

Good for Charlotte. You’ve gotta put your foot down when schools cancel on you, and this was a great way to do it. More schools should be thinking twice before cancelling contracted games. Old Dominion is now screwed worse than they screwed Charlotte. Revenge in sports is sweet.

No big deal for either team I suspect. Although it does seem like kind of a petty, cry-baby move on Charlotte’s part.

I can’t blame Charlotte at all. They’re just doing what they need to, just like ODU apparently. Charlotte had to filled the void with a home and home, and that wouldn’t be possible with the 2013 ODU game…

As Mr. Kelley explained to us before, there are 4 schools that have not used their “Hawaii exemption” this year. Fresno St, San Jose St, San Diego St, and Army. Of these, only Fresno St and Army share open dates with ODU. (FSU: 10/12, 11/16; Army: 11/16) One of these could pick them up (unless there is some rule saying the schedule is locked at this point). I think Army is the better option. Fresno is a long way from Norfolk, and ODU already travels to Idaho; plus Army has 4 open dates.

UNC-C is not making friends. I know App State wants a piece of them so bad they can taste due to a few UNCC fans talking smack on message boards………..and they haven’t even snapped a ball yet.

Not good to cancel at this late date.

I wonder whether some of you even read the article. Last week, ODU tried to screw Charlotte out of a home-and-home by cancelling its game at Charlotte in 2014, but keeping its home game vs. Charlotte on its 2013 schedule. That was a pretty dirty trick on the part of ODU, yet some of you are blaming Charlotte for being unwilling to play a 1-and-done away game at ODU when, contractually speaking, that is not something they ever agreed to. What Charlotte did in cancelling this year’s game is perfectly reasonable considering the situation ODU put them in.

Also, teams should think twice about scheduling ODU if this is the kind of crap they pull.

Yes, we have already added those games to their schedule.