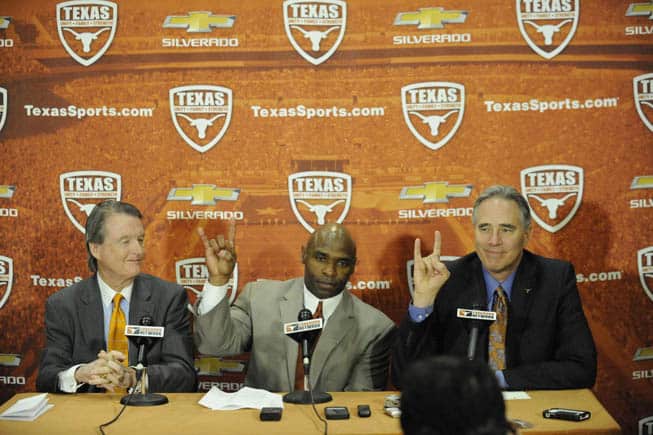 In four seasons at Louisville, Strong led the Cardinals to a 37-15 record, two Big East championships, and four bowl games, including a 33-23 win over Florida in the 2013 Sugar Bowl.

Strong has several high profile coaching stops on his resume, but one sticks out to the Longhorns. In 1985, he was a graduate assistant for the rival Texas A&M Aggies.

With that in mind, it only took a little over 20 minutes into the session before Strong was asked about his thoughts on playing Texas A&M in the future.

Reporter (unidentified): “Coach, you have experience at that other school as a graduate assistant. Some day, would you like to be a part of reviving the Texas-Texas A&M rivalry on the football field?

Strong: “Oh yeah, you would love to because if you look at it, there’s two schools that played a number of years, and you’d like for that to continue.

“But it’s so hard now with the different conferences, and now when you talk about ‘Hey, let’s go play another Texas A&M,’ you’re asking for a lot of big games to be played. And a lot of schools just don’t want to see that happen right now because the number of in-conference games they have to play.”

Below is video of Strong’s media session. The Texas A&M question begins at the 21:10 mark.

But the two schools haven’t played since 2011, Texas A&M’s last season in the Big 12, and currently have no future games scheduled against each other.

Last March, then Texas athletic director DeLoss Dodds said he thinks the two will “play sometime,” although he sounded a bit perturbed that the Aggies bolted for the SEC.

“They left,” Dodds said. “They’re the ones that decided not to play us. We get to decide when we play again. I think that’s fair. If you did a survey of our fans about playing A&M, they don’t want to. It’s overwhelming. I know. I hear it. Our fans are important to us. I think there’s got to be a period where things get different. I think there’s too many hard feelings.”

Texas hired Steve Patterson as their new athletics director last month. When he was asked about the rivalry, he laughed.

“We’re working on it,” Patterson said smiling. “It’s under a lot of water. We had it when I was here.”

Eric Hyman, who became the new Texas A&M athletics director in June of 2012, said at the time that he’s in no hurry to make a decision.

Texas Univ. officials forget they tried to gain an unfair recruiting advantage with the LHN. When the Aggies looked after their own affairs the “Horns” couldn’t handle t he outcome.