CFP National Championship: A blueprint of how to beat LSU…and Clemson 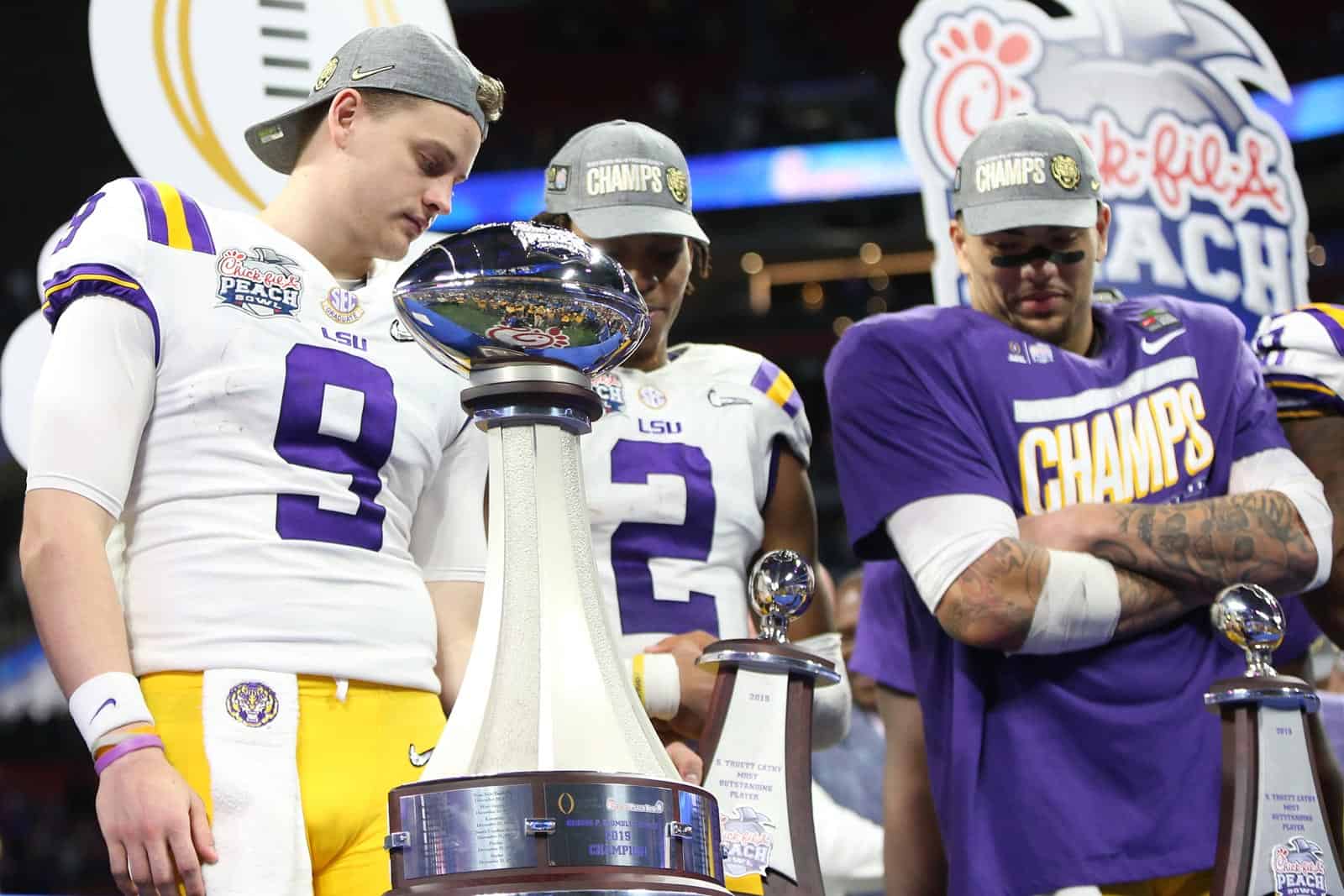 Only six teams came close to doing what no squad could manage to do this season – send (1) LSU and (3) Clemson off the field with a loss.

This handful of near misses, stacked in among blow outs of epic proportions, can help identify small windows of opportunity for each of the two sets of Tigers still standing.

Is this how you win a national championship?

HOW TO ALMOST BEAT LSU

In its 14 games in 2019, LSU allowed 30 total sacks. Of these, 12 (or 40%) came in its three narrowest victories. The Tigers gave up four sacks at Texas, three vs. Auburn and five at Alabama. Compare that to the one they allowed vs. Oklahoma and the two they gave up against (5) Georgia.

Clemson’s defense has earned 42 sacks this season (three per game on average), the twelfth most in the FBS. It scored a season-high eight sacks at Syracuse and picked up six at Louisville. It earned four sacks in its win over Ohio State.

The final common thread in LSU’s almost-losses this season is performance in the red zone. While the Tigers managed to score points 97.14% of the time they were inside the 20-yard line this season, they only scored a touchdown 78.57% of those occasions. Of their five worst red zone outputs, two came at Texas (LSU was in the red zone five times and only scored touchdowns twice for a 40% mark) and vs. Auburn (the Tigers were inside the 20 five times and found the end zone three times, or 60%). LSU was also in the red zone five times at Alabama but improved its performance to four touchdowns vs. one field goal (80%). Comparatively, the Tigers found the end zone on 100% of their red zone appearances vs. Florida (three-of-three) and Oklahoma (five-of-five).

Clemson has only allowed opponents to score a touchdown 35.71% of the time they’ve been inside the 20. It’s the second-best mark in the nation. The Buckeyes were in the red zone three times in the CFP Semifinal and didn’t score a single touchdown, kicking three field goals instead.

HOW TO ALMOST BEAT CLEMSON

Clemson averaged 246.14 ground yards in 2019 and was only held under the 200-yard mark on three occasions, also it’s three closest calls. It rushed for 158 yards in its win vs. Ohio State, 125 at North Carolina and a season-low 121 against Texas A&M. The next worst performances came in a pair of back-to-back games at South Carolina and vs. (24) Virginia in the ACC title game – the Tigers managed 211 rushing yards in each of the two wins.

(1) LSU has held opponents to an average of 118 rushing yards per game this season (No. 20 nationally). It held six of its foes to fewer than 100 yards rushing including limiting (5) Georgia to 61 and (4) Oklahoma to 97 in its last two outings.

Clemson’s average of 26.4 first downs per game earns it a No. 3 ranking in the entire FBS, coming in just behind Ohio State (28.4) and LSU (27.8). It’s no irony that the Tigers’ two poorest performances in 2019 in moving the sticks came vs. Ohio State (it earned 21 first downs) and at North Carolina (it only moved the chains a mere 14 times). Compare that to the 31 first downs it hung up on Florida State.

LSU is ranked No. 30 in the FBS in opponent’s first downs, allowing, on average, 18.6 per game. It gave up a season high 20 in the narrow win at Texas but allowed just nine vs. Oklahoma.

Clemson’s defense (ranked No. 3 in the FBS in allowing long plays from scrimmage) only gave up a mere four plays for 60-plus yards in 2019. Two of these (68- and 64-yard runs) came in its narrow win over Ohio State. In the one-point win over North Carolina, the Tigers allowed back-to-back 26 and 40-yard pass plays in the Tar Heels’ opening drive for a touchdown and then gave up a 22-yard run on 3rd and 2 on UNC’s final scoring drive in the fourth quarter.

LSU’s offense is ranked No. 1 in the FBS in long plays from scrimmage. It torched opponents for 60-plus yards on nine occasions in 2019.