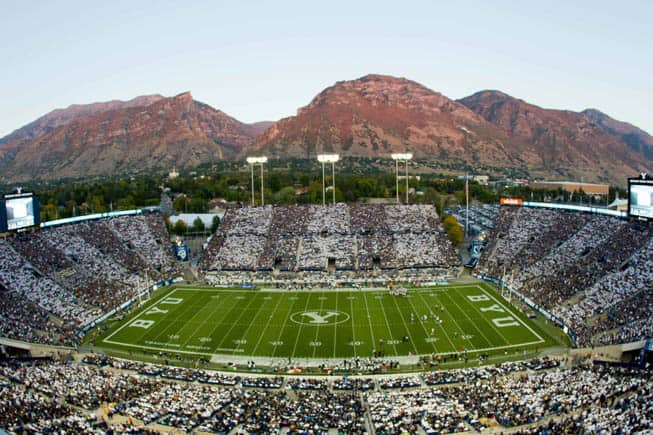 BYU will now host Wisconsin in Provo in 2019 instead of 2017. (Russ Isabella-USA TODAY Sports)

Last October, the BYU Cougars and the Wisconsin Badgers announced a home-and-home football series for 2017 in Provo and 2018 in Madison.

Earlier today, Wisconsin revealed a handful of future games and updated their future football schedules through 2017. However, one 2017 game was missing from their official release — the game at BYU.

Wisconsin officials told us, and then announced on Twitter, that the 2017 game at BYU has been moved to the 2019 season.

Got some questions about #Badgers' series w/BYU on future schedules. Games will be played 2018 (in Madison) & 2019 (in Provo)

An exact date for the 2019 game in Provo has yet to be determined, but it will likely be Sept. 7 or Sept. 21 based on the Big Ten’s scheduling pattern.

The 2017 game in Provo was previously slated for Sept. 2, while an exact date for the 2018 game was undetermined. The 2018 game will still be played in Madison, with likely dates falling between Sept. 8 and Sept. 22.

BYU is now down to six games on their 2017 schedule and up to six in 2019. In 2017, the Cougars are set to host Utah, California, Boise State, and San Jose State and travel to Fresno State and East Carolina.

The 2019 season will see BYU hosting USC, Nevada, Boise State, and Wisconsin and traveling to Virginia and Washington State.

Wisconsin, which will begin playing a three-game non-conference schedule in 2016, has two games set for 2017 (FAU, at USF) and three for 2019 (Washington, Virginia Tech, at BYU).

With BYU at Virginia 9/7, home to USD 9/14, home to Nevada 9/21/2019 and Washington State and Wisconsin now scheduled, I am wondering if BYU at Washginton State is slated for the BYU at Pac-12 road date 11/30/2019 that is now closing many seasons. Wisconsin at BYU could be 8/31 but Nevada is often pushed around in scheduled so Wisconsin could also be 9/21.

That should be the Apple Cup since that is always the week of Thanksgiving but I would think the 29th is as likely for the Apple Cup.

Announced as a home and home? Since BYU is at Wisconsis this year and all three games were in the hopper closely in time that sounds like the BYU spin machine at work. It’s another 2 for 1 for BYU.

Essentially it’s a two-for-one. They announced the single game last July and then followed it up with a home-and-home in October.

Keep in mind BYU has Cal, Utah, Stanford and USC lined up for that weekend for future seasons.

It appears all Pac-12 teams are being flexible in BYU-xxx offsetting ND-USC/Stanford to help avoid Arizona vs Louisiana-Lafayette, etc. to close the year.

It is essentially a 2 for 1, however I’m pretty sure it is 2 separate contracts, which would explain why it has been announced the way that Fido explained.

Of course it’s two separate contracts. That’s the only way the second contract could be spun as a home and home when clearly, there are two games in Madison and one in Provo.

Let’s be clear. The BYU-Wisconsin game for 2013 was announced on July 25, 2012. At that time they indicated discussions for more games were taking place but future plans for the series would be announced when finalized. http://byucougars.com/m-football/byu-play-wisconsin

On October 11, 2012 they announced the home-home series for 2017 and 2018. Is it all part of the same “series” and therefore is not a home-and home like it was announced? Sure–if you look at it that way. But the second contract didn’t include the 1st game in 2013 and therefore is technically a home-home. Its hard to call the series a 2 for 1 from the beginning since there were no other games contracted except the 1 and done in 2013. Semantics….

While games are 2 for 1, the series wasn’t leveraged that way by Wisconsin. BYU & UW had agreed to a home and home. While beig negotiated, Wisconsin still had a 2013 date open – when it became clear it could be a november game, BYU jumped on it separately. After bad November schedules the previous two years and Pac 12 and MWC not helpful with November scheduling as they are now, BYU took a separately bodybag/upset game.