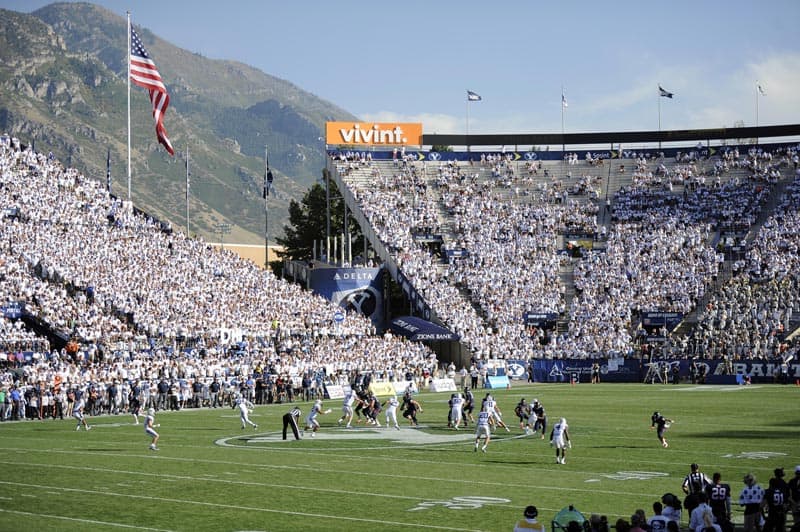 The BYU Cougars have added the Wagner Seahawks to their 2015 football schedule, The Kansas City Star has reported.

The matchup was discovered when the Star obtained a copy of the contract for the BYU-Missouri game set for next season at Arrowhead Stadium in Kansas City.

BYU moved a previously scheduled game against UNLV to the 2016 or 2017 season in order to schedule the Missouri game. BYU then gave up an Oct. 24 game vs. Idaho State so that UNLV could fill the void left by the Cougars.

In turn, the Cougars have added Wagner and will host them at LaVell Edwards Stadium in Provo on Oct. 24, 2015.

The Seahawks are a member of the Northeast Conference in the Football Championship Subdivision (FCS). They finished the 2014 season 7-4 overall and 5-1 in conference play.

BYU has now tentatively completed their 2015 football schedule, although it has yet to be officially announced by the school. The Cougars open the season at Nebraska on Saturday, Sept. 5.

In addition to Nebraska, the Cougars have road trips scheduled at UCLA, Michigan, San Jose State, and Utah State and a neutral-site game vs. Missouri in Kansas City.

BYU traded @ UNLV and Idaho State for Missouri @ Arrowhead Stadium and Wagner. Good trade if you ask me.

I agree DJ, it’s a big win to schedule Missouri in November. Was Idaho St. going to be any better of a home game than Wagner. Probably not. Great away schedule next year, terrible home schedule. This game does not add or take away from what it was before. It was all about getting Missouri locked in.

The home slate gets a little better each year–look out to 2019–home games so far are: Wisconsin, USC, Washington, Boise State

Maybe BYU should join the American Conference since they play three members in 2015.

Unfortunately, I think it’s P5 or bust for BYU even if it means it’s harder for them long term. At this point, I’m ready for them to get back in a conference so we can get back to playing built in rivals again. Right now, we have Utah State and Boise to get pumped up for year after year and the occasional P5 team who they miight have a chance against. From their point of view, going to an AAC or a Mtn West would be a step back. In the meantime, there are many benefits for them in independence that they aren’t in a rush to give up. But, from a fan point of view…Let’s just say it’s hard to get excited about our home schedule in ’15.

AAC and MWC are as good as it gets for non-P5s. The toughest schedule BYU can likely get regularly is 4 P5 schools to start plus a Pac 12 schools during both of the ND-USC and ND-Stanford weeks in early October (at BYU) and to close November (at Pac 12.) 2019 is the first example of what the Pac 12-BYU games will look like if you pencil WSU and Utah into TBD dates.

(Assuming BYU can perform well and does not need to reduce schedules) long-term we’ll likely see Utah, 3 other Pac-12, 2 other P5, BSU, USU, UMass, 2 other MWC/AAC and 1 FCS opponent as a typical schedule.

@brentano I’m honestly curious which “built in rivals” you want in a conference to play? The front range schools haven’t wanted to play since BYU went independent but other than that BYU gets regional rivals on the schedule still (Utah State and Boise State annually, Utah except for 2015-2016 through 2018). As for the P5 at home games, UCLA comes in 2016, Utah in 2017, Cal in 2018, etc. Or you could take a road trip and see a game in one of the NFL stadiums they have on the schedule (at least 1 per season for the next 6 years). There are things not great but there are nice things too. The landscape has changed and doesn’t appear to be going back.

This sounds like a good non-con opponent for Baylor to schedule in the coming years.

Maybe Savannah State is open to a date with Baylor….

Many Div I schools schedule an FCS cream puff school for a usually guaranteed win. I wonder why many of the big boys don’t schedule a more meaningful match against the Bison of NDSU?

So you are an AD and you get to chose one scenario.
1AA -Idaho State and an average MWC team
OR
1AA- Wagner and a team that just played in the SEC Championship game?

They are AFRAID to play NDSU

The home schedule for BYU is not as easy as you make it sound. Think about it, Boise state, Cincinnati and ECU are all pretty good.

Buy has the 17th hardest schedule in college football.