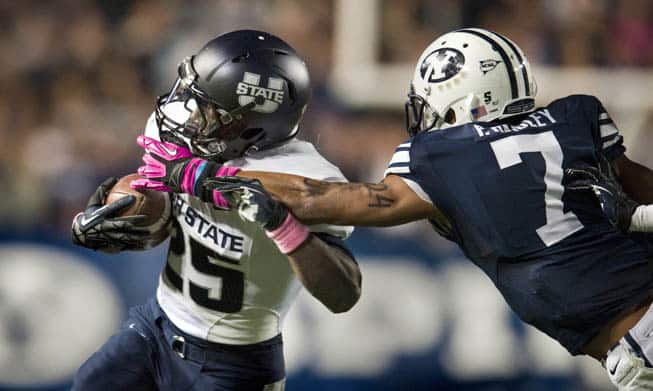 The BYU Cougars and the Utah State Aggies have announced changes to their future football series and have added an additional game in 2016.

The 2015 game was previously set for Oct. 2 at BYU, but was changed to Nov. 28 at Utah State. This balances the series so that the contest is played in Logan in odd years and in Provo in even years. The additional game also makes it a four-game, home-and-home series rather than a two-for-one.

“I appreciate the working relationship I have with Scott Barnes at Utah State,” said BYU director of athletics Tom Holmoe. “We needed to make some adjustments to our 2014 and 2015 football schedules and in the process were able to add an additional game to the series. Scott has done an outstanding job at USU and is great to work with. We value the longstanding in-state rivalry and look forward to the next four games with Utah State.”

“This is an important scheduling adjustment because it begins a home and home series, which has been our goal, and fills a hole in our home schedule in 2015,” said Utah State Director of Athletics Scott Barnes. “We are excited to keep this historic in-state rivalry going and I appreciate working with BYU Athletics Director Tom Holmoe to get this done now.”

The additional contest against Utah State gives the BYU Cougars six games for the 2016 season. BYU is slated to open the season against Arizona in Glendale and later faces West Virginia in Landover, MD. The Cougars also travel to face Utah, Boise State, and Cincinnati.

BYU is the first announced non-conference game for Utah State for the 2016 season.

I sense there is some intense political pressure from 47 E. So. Temple on this one where there are some powerful Utah State supporters on the governance board of BYU. BYU will give on this one, but don’t bet on them rejoining the MWC as easily as Craig Thompson loves to speculate.

This is a great move for Utah State because it gives them an extra home game for free. It’s a decent move for BYU because they get two games against an OK opponent at the end of November, which is a tough week to schedule for.

Stay independent cougars! The MWC stinks! Love the match-up with the Ag’s. Great match-up without all the ridiculous drama generated from the Ute/Coug rivalry.

This is nuts, the Uggies draw 20,000 for a in-state opponent and average a poor 17,000 at home, there are no guarantees of TV coverage other than regional in Logan. BYU fills at 64,000 with home games covered nationally on ESPN, yet Tommy Boy gives up a 2 for 1.??????
At the same time Tommy Boy hands out 2-fers to every major team BYU schedules, insane, unsustainable. Tell me who have the Uggies been able to get to come to Logan, Tenn, Auburn, Oklahoma, Hell no, they play all their bigs on the road. That’s exactly why BYU should only offer the Uggies 2-fers to balance out the giveaways. The Uggs need BYU far worse than BYU needs them, if they don’t like it well maybe they might try to get Ohio St, Florida, Texas, USC to get on the bus bound for Logan. I would much rather see the Uggies dropped, adding a Big 12 or PAC-12 school in their place. If Tommy had balls, BYU would be in the Big 12, despite what the Desperate Morning News claims, I’ve got the docs to prove it, had BYU indicated they would join, if issued an invite in summer 2011, they would have been invited in place of TCU. I have correspondence to prove it with statements by the chancellor of Kansas and others. No cahones in BYU AD’s office. Why did they let Rondo go?