The BYU Cougars updated their 2011 and 2012 football schedules during their Media Day today. Among the updates were television coverage for 2011 and two opponents added to the 2012 schedule.

In 2011, a total of 10 BYU football games will be televised by the ESPN family of networks. Four games are already slated for ESPN and two for ESPN2. Games against Idaho, New Mexico State and San Jose State will be televised by an ESPN station that will be determined at a later date.

BYU’s home game against Idaho State on October 22 will be broadcast on BYUtv. The only game remaining without a TV announcement is October 15 at Oregon State.

Below is a screenshot of BYU’s 2011 football schedule from today’s Media Day (click image to open larger version): 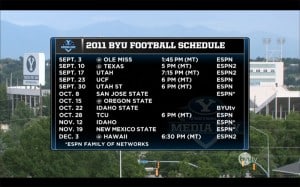 The start time for the Ole Miss game may be incorrect. It’s listed as a 3:45 p.m. CT kickoff on both the BYU and Ole Miss website.

The Cougars also issued a couple of updates for their 2012 football schedule and their future opponents in general. BYU face Idaho in 2012, most likely at home, and may also host the Texas Longhorns in 2012.

The series with Texas was originally scheduled for 2013-14, but the future opponent listing during the Media Day coverage shows that the two schools will play in 2012 and 2014. See below for the screenshot of BYU’s future opponents (click image to open larger version): 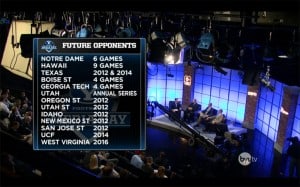 As soon as we can confirm the Texas date change, we will update the schedules for both the Cougars and the Longhorns. If the date has changed to 2012, Texas will have to move a game because their 2012 schedule is already set.

BYU head coach Bronco Mendenhall also stated that the Cougars would like to play Utah State every year, preferable in a two-for-one scenario: two games in Provo and one in Logan.

No other future schedule announcements were made today. For now, the rumors of games against big time BCS programs will have to remain just that…rumors.

Watched this media day this morning and missed those two little details….

If they’re not just typos the 2012 season looks great. Oregon State at home, Hawaii at home, Texas hopefully at home, Utah State and Idaho and probably an FCS school at home. Then ND, Boise, Utah and Georgia Tech on the road (as well as NM State and SJ State on the road). Amazing schedule if that Texas game is moved to 2012.

I’ve been really wondering what that 2012 schedule is going to fill out with, and no official news yet….

Texas in 2012 was a typo. Check the bottom of the article for the update.

USU will not play BYU 2 for 1; it may be what BYU wants, but USU will not agree to it. Now if BYU wants to pay a $1 million guarantee like bigger BCS schools play — then maybe.

Coach Anderson confirmed his is willing to go 2 for 1 with BYU in the short term to keep the rivalry going in an interview on a local radio station. ( http://www.1280thezone.com )

FYI- The screen you posted doesn’t list it, but the time for the Idaho State game was announced at the beginning of the BYU Media Day Broadcast. The game against Idaho State will be at 1 PM MDT.

Idaho in 2012? I didn’t think BYU was willing to make a return trip to Moscow and a basketball deal was offred instead.

As for Utah State there are also rumors of Utah and BYU trading off hosting the Aggies for big BCS near 7-digit $-figures for just a bus trip. This would be the best deal for all 3 schools invovled.

The fact that 2013 is not being firmed very quickly tells me the Big-12 could come through and invite the Cougars. The texas home and home in 2013/2014 just could become a conference game.

The graphic shown during Media Day had Idaho on the schedule in 2012. I would guess they have added them as a home game.

Football guy, the San Jose State, Idaho, and New Mexico State games will be on one of the ESPN Family of Networks station. They could be ABC, ESPN, ESPN2, ESPNU, or ESPN Classic (Yes, BYU admitted that was a possibility when they said they were adding the 4 ESPN stations to the colleges cable program lineup this August). Most of us assume they will be ESPNU games, but if Idaho and BYu are some how undefeated when the two clash, do you really think ESPN wants to place it on ESPNU this early and then end up having it be their best game of the day? All they’ve said is those 3 will be on an ESPN Network, not that they will be on ESPN itself.

Would love to see the BYU-SJSU on ESPN…..the Spartans played Wisconsin very close last year on the main channel and will have a much deeper team this year….this could be a sleeper of a match-up.

I think that this is a great schedule. And the 2013 schedule is even better.