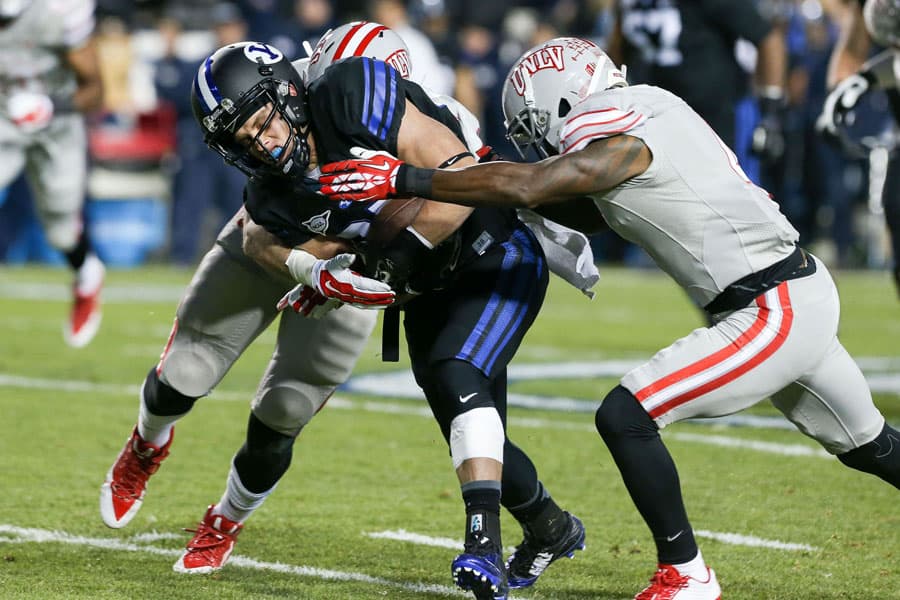 The BYU Cougars and the UNLV Rebels have rescheduled their 2015 game to 2017, according to UNLV’s 2015 football media guide.

The second game of the series was scheduled for Nov. 14, 2015 in Las Vegas, but was postponed late last year to either 2016 or 2017 to allow BYU to play Missouri in Kansas City on the same date.

Per UNLV’s media guide that was recently released (page 81), BYU will play at UNLV on Nov. 11, 2017. That gives the Cougars 11 games on their 2017 football schedule. BYU now only needs one more opponent, but could schedule two because they play at Hawaii that season.

BYU opens the 2017 season against LSU at NRG Stadium in Houston, Texas. The following week, the Cougars host in-state rival Utah in Provo.

UNLV now has three non-conference games set for 2017. The Rebels also visit Idaho on Sept. 9 and Ohio State on Sept. 23.

Looks like 13 games are needed to get six home games and four P5 opponents for BYU. Surely will be a P5 and FBS, both in Provo, to accomplish. Two September dates open, so a home P5 game seems realistic, road return game likely not until 2019 to ensure the six home games (in 2018) AD Tom Holmoe wants annually.

13 games will also mean there is no bye week that season with games straight from Sept 2 to November 25.

13 games, 6 P5s (maybe) and one less bye. That’s an intense schedule. We’ve had a hard time getting P5s to come to Provo, especially for the first game of the series but I’m sure Tom will pull it off…along with another FCS, which will be a nice breather for them.

One of the other road games will be changed (likely Fresno). No way BYU gives up a home game. Money and TV wise makes no sense.

If a game could be purchased to be moved to Provo I think it would be used to relieve this imbalance rather than provide a 7th home game.

Oh my God. Just return to the Mountain West already.

BYU is not going to return to the MW. They’ve said if they eventually have to return to a conference, they will look for options other than the MWC.

This game could be as elusive as BYU’s trip to WSU, the BYU-USM series and ND’s trip to Provo. Announcements through yesterday are reflected below except for this UNLV game:

True. I was just telling someone today, I don’t think BYU is going to take the Hawaii Exemption and add a 13th game. They are going to have to bump one of their away games and add another home game (most likely an FCS team).