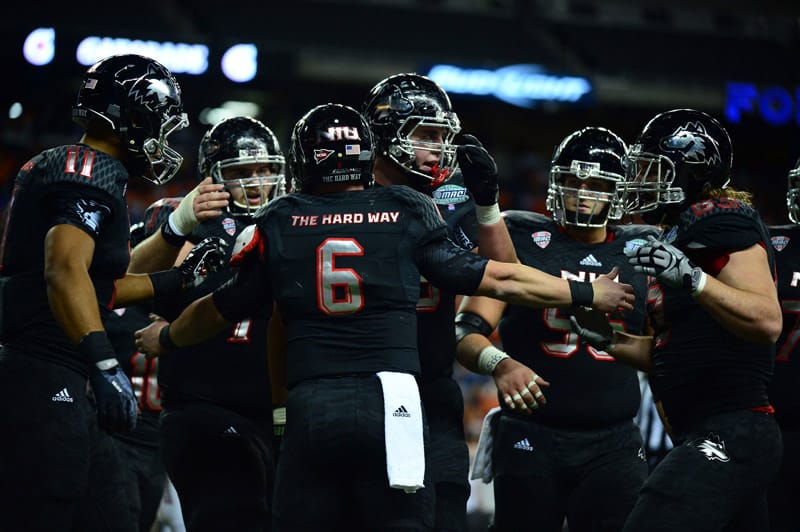 Northern Illinois’ SchedulePalooza is in its second day, and today the Huskies announced a future football series against the BYU Cougars.

Today’s announcement began with a hint on Facebook (team had won at least one national title), followed by one each on Twitter (NIU had never met the team in football) and Instagram (Ghostbusters clip mentioning cats and dogs).

Northern Illinois will travel to face BYU at LaVell Edwards Stadium in Provo on Oct. 27, 2018. The Huskies will then host the Cougars at Huskie Stadium in Dekalb on Oct. 24, 2020.

“BYU is an opponent that will bring a national name and a long tradition of success to our schedule,” Frazier said. “I think this is a series that will make Huskie fans take notice and realize that we are serious about bringing top-quality opponents to Huskie Stadium and that now is the time to get involved with NIU Football.”

As indicated in their hint on Twitter, NIU and BYU have never met on the gridiron.

BYU continues to fill out their future schedules, which as an Independent, requires them to locate 12 games.

Games slated for 2018 include home tilts vs. Utah State, NIU, and Hawaii and trips to Arizona, Wisconsin, Boise State, and Utah.

In 2020, BYU is slated to host Arizona and Virginia and travel to Arizona State, Boise State, NIU, and Stanford.

In BYU’s official announcement of the NIU series today, they also announced a home game vs. Idaho State on Oct. 24, 2015. The Cougars were previously slated to host Cincinnati on that date.

Called that one yesterday after the SDSU series announced. BYU is a decent mid major but NIU still has not announced what one would cal a bug time opponent. No power 5 conf schools

If I were NIU I’d save that one for last

Their A.D. said it would include power five schools. They’ll probably save that one for Friday.

“Decent mid major…?” Sorry, BYU has been better than the vast majority of the teams NIU has played… including Iowa.

BYU is a P5 caliber school. When it all goes down with the new P5 governance, BYU will be doing what they do financially because they can. National title, Heisman winner, winner of every major player award, 64k+ stadium that sells out. No other G5 school compares to that.

No they aren’t. No power 5 conference wanted them, even the B12 which was on life support at one point didn’t offer them they took TCU. BYU is in delusions of grandeur going independent and are going to realize they will be stuck going to the same [email protected] bowl if they are even bowl eligible. They keep building future schedules with 3 or 4 major conf opponents plus Boise who they haven’t had much look with recently. They are putting themselves at 3 or 4 losses a year off the top and if they slip up against a few mid majors they play like NIU, Houston and a bunch of other AAC schools they are playing they will quickly be 6-6 or worse

Delusions? You mean like a barely recognizable commuter school tucked away in the corner of Illinois doing a “Schedule apolooza”?

Please say this game gets moved to Soldier Field. NIU’s stadium would get laughed at in some high school classifications. And this isn’t just me talking crap to a G5…I’d be begging to play N’Western at Soldier also.

BYU is P5 caliber, the stats are pretty clear on that. The school happens to be a religious school located in the mountain west, both of which puts it at a serious disadvantage for an invite.

BYU has been at worse, a mid-level P5 school since Bronco got there. The reason they weren’t extended a life raft in conference musical chairs was the religious angle. Not playing on Sunday severely hampers them, particularly in baseball.

All comments have been deleted that contained personal attacks or attacks on religion. Keep the topic on football or the comments will be locked on this post.

Thank you, Kevin! I love this website and I appreciate the work put in to make it great.

“…or the comments will be locked…”

The second this website becomes ESPN-lite in regards to its comments section will be the moment I never come back.

That’s your prerogative. But this is an independent website run by one person – me. I don’t have the time or resources to moderate personal attacks or attacks on people’s religion.

You do awesome, Kevin. Much appreciated.

It seems teams like BYU and Notre Dame get the most attacks online. With success comes trolls, trying to tear you down. Here is to both having a great season and SMU too!

This will be a fun match-up to watch I’m sure!