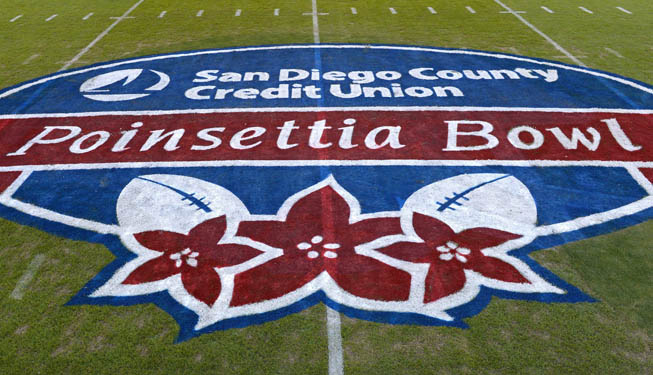 The Poinsettia Bowl has set their lineup from 2014 through 2019. (Jake Roth-USA TODAY Sports)

The BYU Cougars have accepted a bid to play in the San Diego County Credit Union Poinsettia Bowl in 2016 and 2018, bowl officials and BYU announced today.

BYU will face a team from the Mountain West Conference in both seasons, provided that the Cougars are not selected to participate in the College Football Playoff.

The San Diego County Credit Union Poinsettia Bowl is played in late-December each year at Qualcomm Stadium in San Diego, California. This year’s game will feature the MAC vs. MWC on Thursday, Dec. 26 at 9:30pm ET on ESPN.

Here is how the Poinsettia Bowl’s lineup will look from 2014 through 2019:

“The SDCCU Poinsettia Bowl has been a great addition to the local college football sports scene since its inception in 2005,” said Bill Geppert, president of the 2013 bowl game. “We are thrilled to continue the tradition of showcasing exciting football, spectacular pageantry and a tremendous economic boost for San Diego’s tourism industry through 2019.”

I am sure the bar owners in San Diego are thrilled that BYU has abandoned hope of getting into a decent bowl game,

Hotel and restaurant owners too since local Mormons will will turn out enmass and entertain the travelers as house guests. Ticket sales, however, will prosper.

Yeah. And we all know how important it is to make the bar owners feel happy.

True. I’m hoping we just dropped it for 2015. I had that we are committing to a MWC bowl again. I’d way rather play a mid level Pac 12 team (like this year) than a 2nd or 3rd place MWC team in the Poinsettia Bowl.

So . . .for the first time since Independance Day, byu has no prearranged appearance in the Poinsettia Bowl, or the Kraft Bowl next year and limited to no access to either in future. Perhaps one of you could suggest just what other access you see byu as having in the next six years to any Bowls, those with MWC tie ins or otherwise. Prospects look grim indeed.

Nobody is claiming how great BYU’s bowl situation is as an independent. But “grim” prospects for the future? Check out what those who follow things closer than the average “Joe” say: http://www.loyalcougars.com/2013/11/06/byu-football/2160-poinsettia-bowl-contract-tie-ins-independence-las-vegas-hawaii/ Nothing is done until it is done but the rain cloud act is a little dramatic.

I read your referenced material which holds out hope for Vegas, Hawaii and unspecified ESPN sponsored Bowls. All stuff an average Joe would have bumped into over the past few months from newspapers covering byu. Grim.

Las Vegas and Hawaii are great tourism cities that happen to have 2nd rate bowl games in 3rd rate stadia. Come to think of it; that describes San Diego as well; especially from the Poinsettia perspective. If the season ended right now BYU would finish at at #24 in Sagarin ratings. 21 through 27 are Oklahoma, Florida, Texas, BYU, USC, Ole Miss and UCF.

It sure seems to me that those other 5 teams will be going to a better bowl game than the Poinsettia Bowl. Let see how the guy on the Cougar Kool-Aid blog spins that one.

BYU has almost zero control over bowl games. It’s a big risk for a bowl to sign 1 independent team during its six year cycle instead of a conference. Signing a conference keeps you covered. BYU getting multiple bowls of any sort — especially those regionally that are best for its fans — isn’t a small feat.

Yeah, it’d be better if they had better opponents to play, but the bowl situtation is no worse than it was in the MWC. Independence has brought BYU the chance to play bowl games throughout the season. In the MWC, BYU would be playing Wyoming or Colorado State this week. Now? Wisconsin. Trading the “chance” to play MWC bottom feeders annually for flexibility to schedule USC, Stanford, Cal, Wisconsin, Michigan (all but Mich to multiple-game series) is a win. So it’s not a huge deal that the automatic bowl tie in stayed pretty much the same.

Is there no longer a bowl eligibility requirement since BYU is already accepting a bid? What happened to winning 6 games?

The bid is contigent on 6 wins. Army had accepted a bid to the 2013 Poinsettia Bowl which they will not be able to fill. Poinsettia will have to find a new team to replace them..probably from the MAC or CUSA. The Armed Forces bowl is in a similar situation with Navy. They have 5 wins and will probably qualify; but if they don’t the Armed Forces people will have to scrounge up a replacement.

It’s still dependent on them winning 6 games and becoming eligible. If they don’t, the bid goes to someone else.