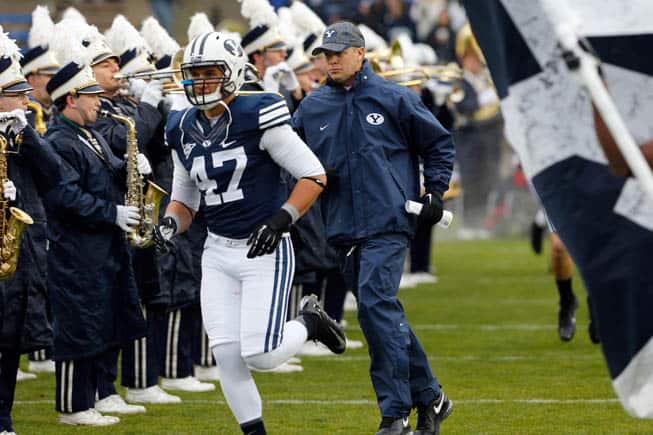 The BYU Cougars have announced their 2014 football schedule, which features games against Boise State, California, Houston, Texas, UCF, and UConn.

Director of athletics Tol Holmoe announced the Cougars’ schedule this evening on BYUtv. The 2014 season will be the fourth for Brigham Young as an FBS football independent.

“I’m pleased with the way this schedule came together. I think it has good balance,” said Holmoe. “I like playing in different regions of the country, including several places we’ve never been. It’s a unique opportunity for our football team and great for Cougar Nation.”

BYU opens the 2014 season with back-to-back road games at UConn on Friday, Aug. 29 (ESPN) and Texas on Sept. 6. BYU then hosts Houston in their home-opener at LaVell Edwards Stadium on Friday, Sept. 11 (ESPN).

The Cougars then host two consecutive games in Provo. Virginia visits on Sept. 20 followed by, after an open date, Utah State on Friday, Oct. 3.

The following week, the Cougars travel to Orlando, Florida to take on the UCF Knights on Oct. 11 before returning home to host Nevada on Oct. 18. BYU then plays back-to-back games at Boise State on Oct. 25 and Middle Tennessee on Nov. 1.

After their second off week, BYU hosts UNLV on Nov. 15 and Savannah State on Nov. 22. The Cougars then close the 2014 regular-season with a trip to face the California Golden Bears on Nov. 29.

They also said the Houston game will be on ESPN, though the time hasn’t been set.

Other notes – TH mentioned Texas, UNLV and Nevada as schools he will or would like to schedule more in the future.

On the school set to visit Provo on 11/22 but not contracted, which was not USM, who was contracted to play, I wonder if this was an ACC team. Much like the Pac 12 teams scheduled to offset the Notre Dame games, I wonder if ACC teams will play BYU in mid-Novembers to offset ACC-ND games. Miami had been rumoured as a November 2014 opponent for BYU at one time.

ACC would be a great relationship for BYU. I know BYU really enjoyed working with Texas on this last deal, so hopefully we’ll see more of them in the future.

Houston was a surprisingly difficult game last year. Houston was also a fairly young team so I expect them to only get better. At the same time, I think BYU will be a little better prepared for this time around. That could be a game that sets the tone for the rest of the season with it being the first home game and having it come off a hard road game with Texas.

The first 8 games are a pretty decent schedule but from November 1st on are 4 of the worst teams in college football, UNLV and Cal are 2 of the worst teams in their respective leagues and Middle Tennessee and Savannah State are a complete joke. That is the challenge of being independent, nothing but crappy games to end the last third of the season. Only 3 BCS caliber teams on the schedule. Even an unbeaten season would not get you into a quality bowl with this rather weak lineup of teams.

I completely disagree with you. You can call Savannah State what you want, yeah, they’re a cupcake for most FCS teams. But Middle Tennessee beat Marshall last year and went 8-4 in the regular season, which was good enough for the Armed Forces Bowl. UNLV also went bowling last season after going 7-5. Cal was awful last season, yes, but that was Sonny Dykes’ first season, and that’s the same guy that had Louisiana Tech putting up astronomical numbers on offense the past couple of seasons he was there. They’ll be much better this season. So don’t take a nap during November, BYU fans.

@Dave
UNLV was 7-6 last year and MTSU was 8-5. Cal was 1-11 last year and so was Savannah St as an FCS team. You are right that the Nov schedule leaves something to be desired but there are two Bowl teams on the schedule for November.

I expect the Texas game to be on ESPN or ESPN2 and the Utah State game will likely be on one of those as well. So expect to see the Cougars on ESPN or ESPN2 in 4 of their first 5 games and 4 of the first 6 weeks of the season. I would guess that the Virginia game would be on ESPNU.

October will be the toughest run of the Schedule. USU has been good the last 2 years UCF had their best season ever last year and Boise on the Smurt turf is always tough.

This feels like a 10-win season and possible BCS qualification.

Pros are the returning qb/rb combo of Hill/Williams.

Cons are losses of KVN/Hoffman.

I’m a Cougar fan and live in Texas. I really look forward to games vs Houston and Texas the most.

Might want to recheck those plates again, you’re looking at 8-4.

Which games do you have BYU losing? @ Texas @UCF @BSU and who? @Uconn or Utah State at home? Maybe Houston at home?

If this offense continues to make strides like it did during the course of last season and Bronco can keep his defense passable, then I would agree with Nateuta06 that this schedule looks like 10 wins. Though 8-4 is definately possible.