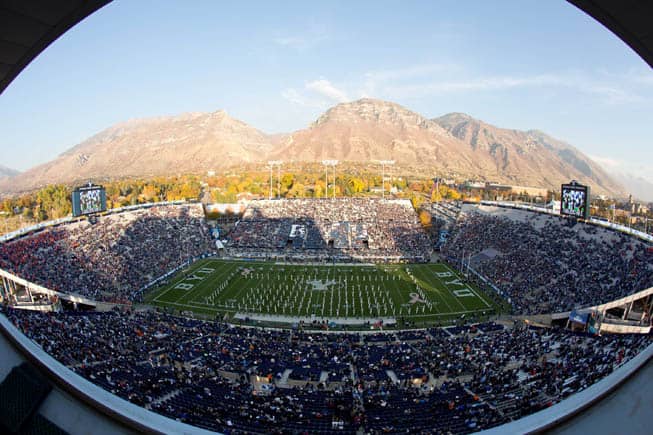 The BYU Cougars and the Arizona State Sun Devils have scheduled a home-and-home football series for the 2020 and 2021 seasons, both schools have announced.

Arizona State will host the first game of the series at Sun Devil Stadium in Tempe on Sept. 19, 2020. In the second and final game, BYU will host ASU at LaVell Edwards Stadium in Provo on Sept. 18, 2021.

“BYU-ASU is a great regional matchup that dates back to the 1930s,” said BYU Director of Athletics Tom Holmoe. “As charter members of the Western Athletic Conference, we’ve enjoyed a rich football rivalry. We look forward to playing in Tempe again, where we have a lot of Cougar fans and alumni. It will also be exciting to have ASU back in Provo.”

“This football series with Brigham Young University renews one of our oldest and most interesting rivalries,” ASU Vice President for University Athletics Ray Anderson said.  “These two institutions and the communities they represent enjoy a long, rich history and a lot of common bonds between them.  Also, it fulfills a need for us to schedule home/home series with institutions that are located in the Western portion of the United States.”

Arizona State and BYU have met 27 times on the football field. ASU leads the overall series 20-7 but lost the last two meetings in 1997 and 1998.

BYU is the first announced non-conference opponent for the Arizona State Sun Devils for both the 2020 and 2021 seasons.

BYU’s 2020 home game against Virginia was previously announced as Sept. 19, but the game date is to be determined since the trip to ASU now occupies that slot.

I love to see Arizona State and Arizona on the future schedules.

Do the ends of that stadium really seat more than the sides? Or is it just the camera lens.

I would concur. Cougar Stadium is very nice from a view standpoint, but there are no restrooms on the upper level of the stadium. Can’t figure that one.

I think DS was referring to the stadium pictured in the photo, which I believe is an optical illusion. Interestingly, LES does in fact seat more in the end zone sections than it does in the side line sections.

Awesome. Great get for BYU’s Schedule. Has anyone heard what they are doing for a bowl game next year? They usually have something scheduled by now.

I think that they will be going to the NC game. That’s my plan anyway. Kidding.

I think BYU’s schedule over the next four years will continue to be somewhat “weak,” but starting in 2018 they should have no problem scheduling 6-8 high quality opponents on a yearly basis. They just need to schedule those quality opponents several years in advance.

Why do they play Boise State every year? Do they both need the game? Also, why did BYU agree to playing in Boise every other year when their stadium is only half the size of BYU’s? They have enough Mountain West games scheduled without having Boise every year. Boise will be unlikely to get back to the level of success of a few years ago.

I think the Boise deal looked a lot better when it was contracted a few years ago. Boise was a BCS contender year after year and was looking to move to (what was then, a big deal) the big east. BYU was glad to have one, some what local team that looks better on the schedule than Idaho St. each year. As a fan, I’ve enjoyed having Boise on schedule. I know they’ll have some down years coming up but they have a great fan base and it’s always a fun game.

Boise State is a perennial top 25 program. There are few perennial above-.500 programs looking to schedule BYU regularly home and home for October games.

Hey, I never said BYU isn’t lucky to have this deal. It certainly benefits them more than it benefits Boise.

Boise was a consistent top 25 program for several years. Those days are behind us now. Kellen Moore is gone and so is Chris Petersen. Boise is stuck in the Mountain West and the PAC 12 and Big 12 are not interested in them. They are a big fish in a small pond and need to be content with MAACO and other non descript bowls for the next few years. Their home attendance dwindled last year and without a growing fan base and significant new $$$ from TV in one of the Big 5 conferences, their 36,387 seat stadium will not be enlargened, which is necessary before a big conference would take them. Until 2020, when Florida State comes to Boise the home schedule will consist of the usual Mountain West and leftover WAC teams with Washington in 2015 the only really decent non league game to get excited about. I’m sorry but,
Louisiana/Lafayette, UConn, Troy, Virginia, Idaho State and Washington State are not going to fill Bronco stadium. BYU is the only non league team close enough and with a big enough fan base to fill Bronco Stadium. Maybe in 8-10 years Boise will be able to move up. Don’t hold your breath!

Remember that the Nebraska Corn Dogs also owe BYU a game. Will be good to see the Red team come up dead in Provo in the 20’s. Dandy D