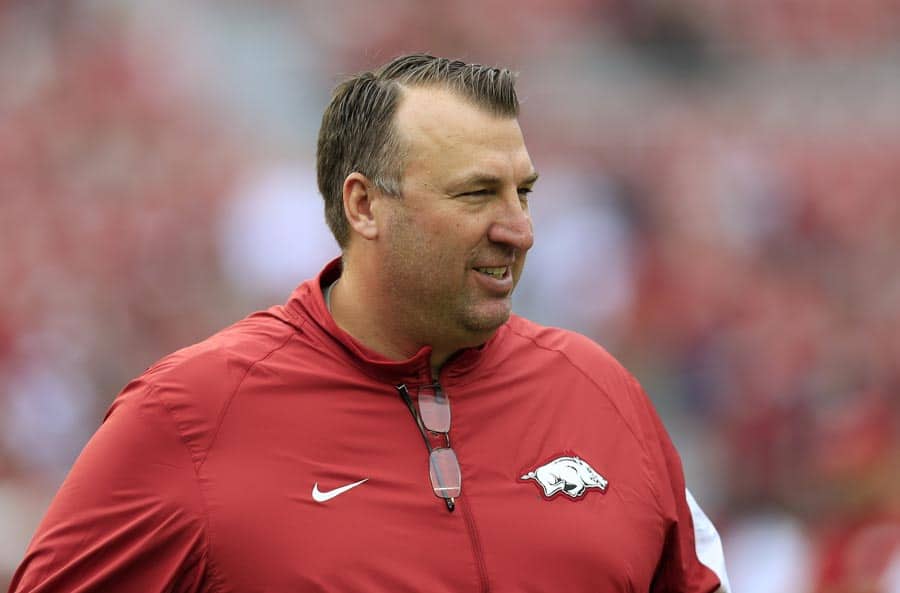 Bielema was initially asked about the SEC discontinuing the scheduling of FCS teams by ESPN.com’s Edward Aschoff. Before saying there were “multiple layers” to that question, Bielema offered his thoughts.

“I do know this. As a head coach, I’d love to see more uniformity across all divisions, all conferences, as much as possible, just because as we get into this playoff thing…and obviously we’re (Arkansas) not in the hunt now but hope to be soon…you try to make that as even as possible.

“I tell you a fun one to think about. There’s 14 teams in the Big Ten and 14 in the SEC. You know kind of like the basketball one where there’s a challenge, maybe have a Big Ten/SEC challenge. Let some people rank ’em in the out-of-season and let the best-of-the-best play each other. Maybe the lower ones play each other year in and year out. You just reserve a week every year, it would be kind of a fun thing.”

Bielema capped off his Big Ten/SEC Challenge plan by getting back to the original question about playing FCS teams.

“If you could just reserve that (the challenge games), that might eliminate the whole need for an FCS. Schedule three other opponents that are FBS and go.”

Bielema’s plan sounds simple enough, but there are a lot of complexities to scheduling that would make an annual Big Ten/SEC Challenge a long-shot.

First, four SEC teams already play a non-conference game against a team from the ACC annually (Florida-Florida State, Georgia-Georgia Tech, Kentucky-Louisville, and South Carolina-Clemson). Those four schools would then have two FBS teams on their non-conference slate and it would be up to the other ten to schedule an additional one.

In addition, some of those schools have already scheduled future home-and-home series against other Power Fives in addition to their ACC rivalry game (i.e. Auburn vs. Cal and Oregon, Georgia vs. Notre Dame and UCLA, LSU vs. Texas and UCLA, etc.).

Second, the Big Ten plays a nine-game conference schedule beginning in 2016. That means each team will only have four home conference games every other season. With most Power Five teams needing six or even seven home games per season for revenue, that’s just another speed bump in the process.

A Big Ten/SEC Challenge in football could also get in the way of the rising number of neutral site games and future home-and-home football series between Power Five teams.

While there is an argument that many teams need to strengthen their non-conference schedules, it doesn’t seem like a conference challenge or similar will be possible unless or until there is more uniformity in scheduling.

Schedules would have to be worked in over a certain period of time, but an intriguing suggestion.

unless the SEC and Big 10 stop playing so many bowls against each other this would kind of suck longterm b/c we’d get a ton of repeating matchups.

True, but if these games are on-campus then that adds a whole new dimension. ‘Bama rolling into Columbus or Michigan heading to the Swamp would be crazy.

Intriguing though this may be, I’m not sure this is the right tact to take.

We’re only now seeing schools required to play at least one Power 5 team out-of-conference. If you institute a Big Ten-SEC challenge, what are the chances a Big Ten team schedules another Power 5 opponent *in addition to* an SEC opponent?

Why are people even pretending this is serious. Btw, don’t worry about the B10,,the SEC would never even think about this. They voted playing 9 game conf schedule 13-1. They would rather play 6 teams twice every 12 years. It’s stupid to play 6-1-1 with 14 teams. The SEC also plays 14 FCS games a yr, the most tied with the ACC. The B10 plays 7 this year and is phasing them out. The B10 is going to 9 game conf schedule 6-3 format which means hard to avoid the top of the other division, something that is very easy with a 6-1-1 (ACC and SEC).

Look at what happened when he scheduled Toledo.

What you don’t know is, Arkansas would schedule Purdue, not Michigan St. #WPS

Arkansas has already scheduled Michigan future games, plus Toledo is 9-1 this year, not bad.

Arkansas-Purdue is a fair match up. Arkansas sucks.

LOL @ Common Sense… you must be an Old Sh*t fan.

Arkansas is going to finish the season 6-6. They lost 2 OOC games to Toledo and Texas Tech. They are not good. Let me repeat, they are not good. The only reason you think they are is because ESPN hypes them up. Then during the regular season, they will beat another overrated SEC team like LSU, and it will make you think they are good. If you can’t win the majority of your OOC games and your conference games, then you don’t deserved to be glorified.

I’d rather see an extension of week-before-the CCG OOC games. The UF-FSU, UK-UL, USC-Clemson and UGa-GT series are a good thing. So how about a few SEC-B10 games home and home each year? Vandy-NW (battle of the privates), Mizzou-Nebraska (Big 8 throwback game), Alabama-Penn State (a classic rivalry), Arkansas-Wisconsin (the who wants Bielema game)…

Bama-OSU, LSU-MSU, Auburn-UM, Ole Miss-Wisconsin, Iowa-Florida… I would love this, especially with the prospect of Bama not being able to weasel out of the MSU match-up.

How about a P12/SEC challenge?
The only 4 games I can remember in the last 5 years between these two leagues was Oregon/LSU and TA&M/ASU at neutral sites, WSU @ Auburn, and a home-and-home between LSU and Washington. The SEC won all of those game, but that’s because those P12 teams weren’t that good that year, or the SEC team was a top 10 team.

I would match Missouri with Iowa and Florida with Ohio State

I’ve thought for a while that the top G5 conferences should have a Bracket Buster set of games late November – to help SOS in an attempt to get into BCS games before and the playoff 4 now.

This year isn’t the classic scenario – but a game against Toledo could help a Navy or Houston instead of scheduling an unknown earlier in the year.

Why are people even pretending this a serious thing. The SEC voted down a 9 game conf schedule 13-1. They prefer 6-1-1 format where they play 6 teams in their conf twice every 12 years. They would rather play cream puff games vs another conf game. Bielma is delusional if he thinks his SEC brethren won’t do that but are going to for 1 second replace FCS games with a challenge game. SEC needs to go to 9 conf games than talk about stuff that has slim chance of happening like a challenge against another conference.

This would be ridiculous Florida vs Ohio St. Arkansas vs Wisconsin Alabama vs Michigan St. LSU vs Iowa. Georgia vs Michigan. Nebraska vs Missouri. Texas A&M vs Northwestern. Vanderbilt vs Purdue. Kentucky vs Indiana. Mississippi St vs Penn St. S.Carolina vs Minnesota Tennessee vs Illinois

As intriguing as the match ups would be, that kind of scheduling agreement would be far too limiting. Many of the SEC teams already have built in cross conference rivalries (Georgia-GTech, Florida-Florida St, South Carolina-Clemson etc…). Add in an annual challenge game against the B1G and the odds of SEC teams playing other P5 conferences would be slim to none. That would never fly…

Not skirting around any issue. Regardless of whether a team has 3 or 4 non-conference games to schedule in a season, teams with a cross-conference rival would be playing two Power 5 teams every season (their rival, plus the B1G challenge team). Scheduling any other power 5 team (B12, Pac-12, whatever…) would mean signing up to play three power 5 non-conference teams in that season. This is well beyond the one power 5 team per season requirement, and completely independent of the length of the conference schedule. Most SEC teams would never sign up to being limited in that fashion.