Breaking down Week 9 of the 2020 college football schedule 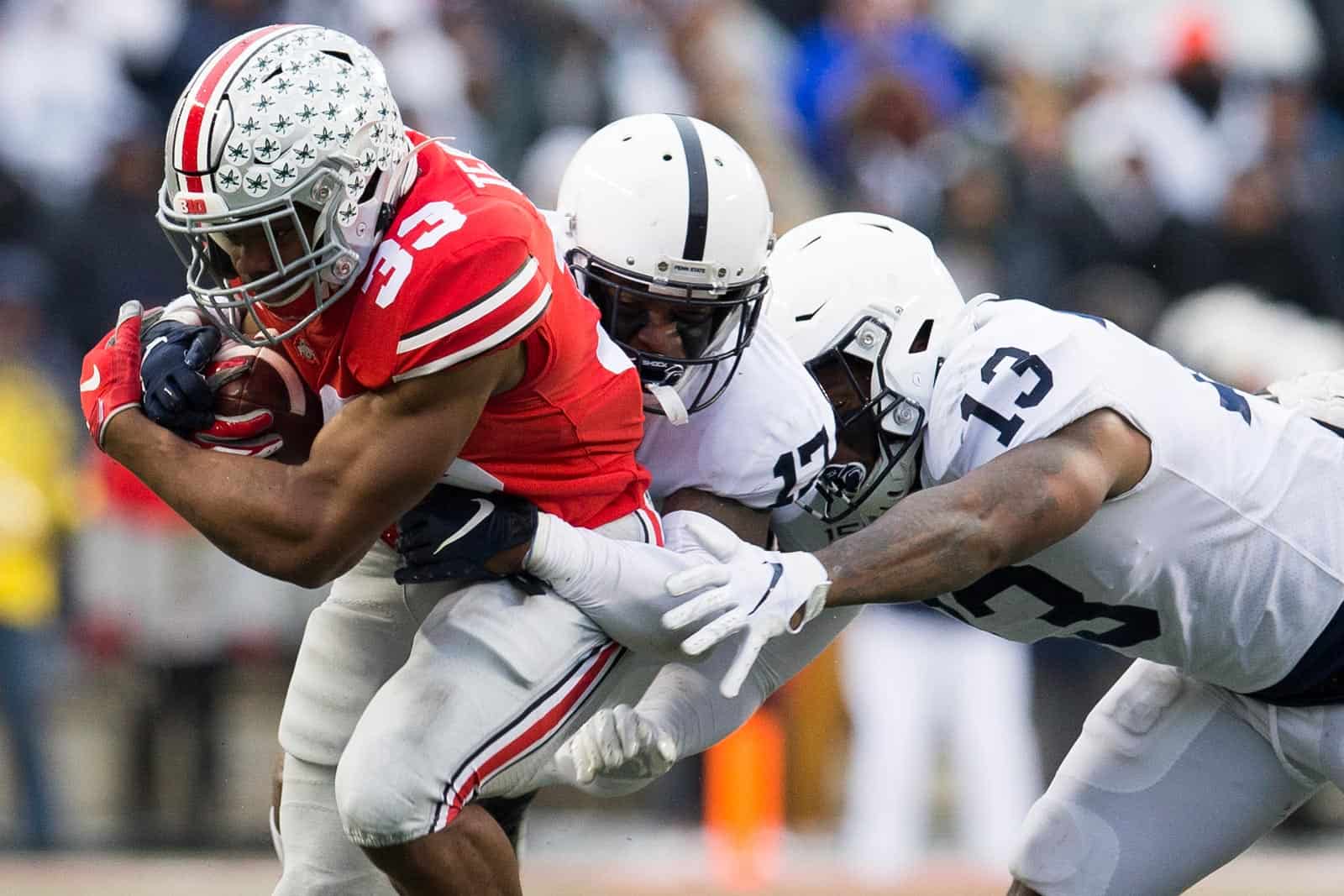 With both the Pac-12 and MAC due back next week, Week 9 marks the final weekend of a “reduced” FBS schedule. It’s also the first weekly offering to not include any FBS vs. FCS matchups. If rivalry trophies are your thing, there are a whopping seven games (roughly 18% of the entire schedule) this weekend with hardware on the line.

The week kicks off on Thursday night with South Alabama at Georgia Southern (7:30pm EST, ESPN) and wraps up late with Colorado State – in its 2020 season debut – at Fresno State (10pm EST on CBSSN).

Friday serves up three games starting with Minnesota at Maryland at 7:30pm EST on ESPN. After that, check out East Carolina at Tulsa (9pm EST, ESPN2) and Hawaii at Wyoming (9:45pm EST, FS1).

Saturday gets rolling early with Boston College – off to a 4-2 start – at (1) Clemson at high Noon EST on ABC. Other viable options at the same time include Michigan State at (13) Michigan on FOX and (5) Georgia at Kentucky on the SEC network. Also of note is Memphis (currently No. 9 nationally in pass offense) at (7) Cincinnati (No. 22 vs. the pass) on ESPN. The Bearcats held SMU’s high-powered air attack to a mere 215 yards and one score last week – can they do it again?

The midafternoon offers up a pair of games, both airing at 3:30pm EST, both featuring a Top 25 team taking on a unranked opponent that they should beat – (4) Notre Dame at Georgia Tech (ABC) and (17) Indiana at Rutgers (Big Ten Network). Thirty minutes later, at 4pm EST, don’t forget to switch over to Texas at (6) Oklahoma State (the only undefeated team still standing in the Big 12) on FOX.

Primetime kicks off with Mississippi State at (2) Alabama (7pm EST on ESPN). Though the Tide are 32-point favorites (Yikes!) they are currently ranked No. 80 (out of the 101 FBS teams currently posting stats) vs. the pass. How does this look vs. Mike Leach? A half hour after that – at 7:30pm EST – the only ranked vs. ranked matchup of the week – (3) Ohio State at (18) Penn State – airs on ABC. Solid alternatives at the same time include Arkansas at (8) Texas A&M (SEC Network) and Missouri at (10) Florida (SEC Alternative).

Late night viewers have an opportunity to watch Western Kentucky try and upend (11) BYU – off to its best start since 2008 – at 10:15pm EST on ESPN.

San Jose State’s 5-7 finish in 2019 overshadowed its impressive No. 4 national finish in pass offense. The Spartans averaged 338 air yards per game last year, a mere four yards fewer than Alabama which averaged 342. Though SJSU bid farewell to QB Josh Love it picked up senior Nick Starkel (#17), who transferred in after ten combined starts at Texas A&M and Arkansas. He’ll have the top three receivers from last season at his disposal along with three starters from the O-line. It sets up ever so well vs. New Mexico, which returns a humble four starters to a defense that finished dead last – in the FBS – vs. the pass in 2019. Keep an eye on senior Spartan WR Tre Walker (#10) the No. 3 receiver in the nation last season.

Only four teams in the entire FBS have allowed more passing yards than Texas Tech has this season. While this isn’t necessarily a shocking revelation, it does make Halloween look even spookier for Red Raider fans lucky enough to have a seat to witness Oklahoma – the No. 7 ranked passing attack in the Americas – clash with the home team. Where the Red Raiders gave up 302 passing yards to an Iowa State offense that’s averaging 220 air yards per game (No. 61 out of the 101 FBS teams active in the FBS), the Sooners hung up 332 on a TCU D that – on average – is allowing its opponents 224 passing yards per game (No. 42 in the FBS). The Red Raider defense will need to play above their heads for four full quarters to have a shot. Check out Oklahoma freshman QB Spencer Rattler (#7) – he’s ranked No. 6 nationally in TD passes and is at No. 8 in both passer rating and yards per attempt.

One of the three FBS rivalry cannons, the tale of the Big Ten edition of the Cannon stretches back over 100 years ago, to 1905. That’s when Purdue students brought the scaled-down firearm to Illinois with hopes of firing it off after a win. Illini fans found the weapon, hidden near their stadium, and captured it. It was retained by one of the students involved in its confiscation until 1943, when he offered it up to be used as a traveling trophy. The Boilermakers have recaptured the Cannon 36 times vs. Illinois’ 30. The 1956 and 1959 games ended in ties.

First awarded in 2009, the Gansz Trophy honors coach Frank Gansz, a highly regarded, longtime special teams coach in college and the NFL. Gansz played at Navy from 1957-59, was an assistant coach there from 1969-72 and then was the special teams coach at SMU from 2008 until he passed away in 2009. Navy has won seven Gansz’s vs. SMU’s one (in 2018).

The O’Rourke-McFadden dates to 2008 and honors the two All-American quarterbacks who played in the first-ever clash between Boston College and Clemson in the 1940 Cotton Bowl. “Banks” McFadden led his Tigers to a 6-3 win over the Eagles’ “Chuckin’” Charlie O’Rourke. The loss was the last-ever in O’Rourke’s collegiate career, the next season he led BC to an 11-0 record and a national championship, the only in school history. The Eagles have only won the trophy once, in 2010.

The Paniolo Trophy – Hawaii at Wyoming – series started in 1978 – Wyoming leads 14-10 but the two have split the last four, the home team winning on each occasion.

“Paniolo” is the Hawaiian word for cowboy. The Paniolo Trophy originated in 1979 when both schools were WAC members and was awarded consecutively until 1997. The original award went missing and was replaced in 2013 when the schools reunited as members of the Mountain West. The newer version features Hawaiian cowboy Ikua Purdy roping a bull. Purdy, who won the steer-roping competition at the Frontier Days Rodeo in 1908, became the first Hawaiian to be inducted into the National Rodeo Cowboy Hall of Fame in 1999.

First presented in 1953, the Paul Bunyan was donated by then Michigan governor Gerhard Mennen Williams to commemorate Michigan State’s inaugural season in the Big Ten. The trophy is a whopping nine-feet tall, featuring Bunyan standing with one foot on each side of the state, each school’s flag claiming its half. The Wolverines have earned 38 Bunyan’s vs. the Spartans’ 27. The 1958 and 1963 games both ended in ties.

Though Texas A&M didn’t join former fellow Southwest Conference member Arkansas in the SEC until 2012, the Southwest Classic kicked-off in 2009, when the Aggies were still in the Big 12. The two shared membership in the old SWC for 76-years (1915-91). The Aggies have won eight Classics vs. Arkansas’ three.

Flying under the radar among the countless revisions to what was the original, pre-pandemic 2020 FBS college football schedule are games that were originally slated to be played at one site and were rebooked at another. Week 9 features five of these matchups. In each case the team that was booked in to be the home team magically, with a stroke of a pen, became the visitor.

Colorado State at Fresno State – originally scheduled to be played at Colorado State. The Rams are 4-2 (67%) at home against the Bulldogs vs. 5-3 (63%) in Fresno.

Wake Forest at Syracuse – originally scheduled to be played at Wake Forest. The Demon Deacons are 2-2 (50%) at home against the Orange vs. 1-4 (20%) in Syracuse.