Breaking down Week 8 of the 2020 college football schedule 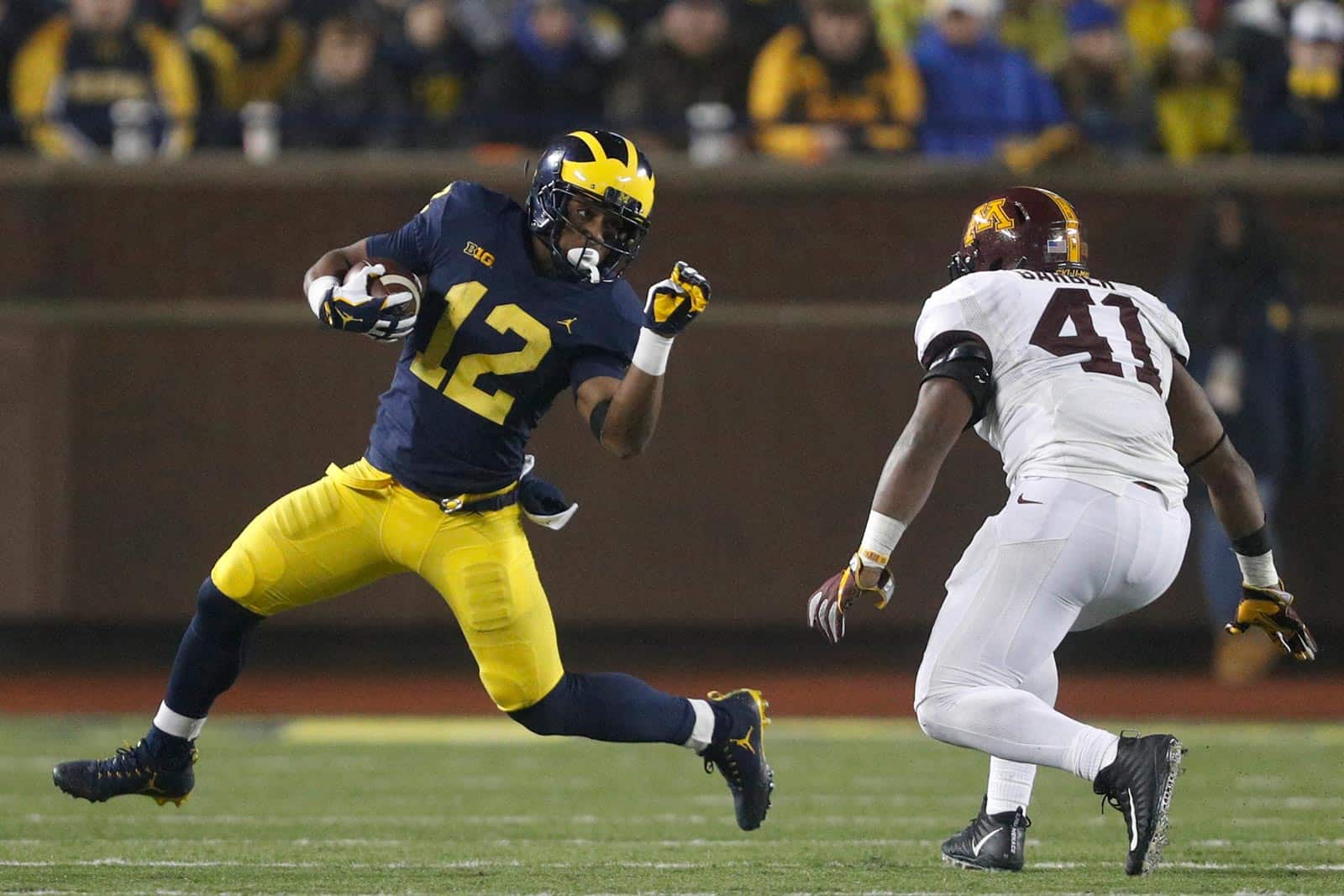 Week 8 marks the intersection on the 2020 college football roadmap where the Big Ten and Mountain West conferences finally join the party, ramping up the total number of games on offer to a season-high 47.

The action gets rolling on Thursday night when Arkansas State visits Appalachian State at 7:30pm EST on ESPN. Tune in to see if the Red Wolves’ No. 3 nationally ranked passing attack can get ‘er done vs. the Mountaineers’ No. 7 ranked pass D.

The highlight of Friday night’s four games is the kickoff of the Big Ten season, Illinois at (14) Wisconsin at 8pm EST on BTN. For an alternate, check out Tulsa at South Florida at 7:30pm EST on ESPN.

Saturday has something for everybody (except for Pac-12 and MAC fans). In the early time slot, tune in to FOX at high noon EST to watch Nebraska at (5) Ohio State. Also keep an eye on (23) NC State at (14) North Carolina (the first of four ranked vs. ranked matchups in Week 8) at the same time on ESPN and Oklahoma at TCU on ABC. For something way less sexy, flip over to ESPNU for 3-1 Georgia Southern at 4-0 (25) Coastal Carolina, both teams are ranked among the top 20 rushing offenses in the FBS.

The midafternoon features three Top 10 squads, all on the road, all at 3:30pm EST: (2) Alabama is at Tennessee on CBS, (3) Notre Dame is at Pitt on ABC and (8) Penn State visits Indiana on FS1. Airing at the same time is (17) Iowa State at (6) Oklahoma State on FOX and Baylor at Texas on ESPN.

For those of us who’ve missed late-night college football, Week 8 finally delivers with a trio of games after 10pm EST. ESPN’s got the call on Texas State at (12) BYU at 10:15pm EST, 15 minutes later CBSSN delivers UNLV at San Diego State and FS1 gives us Air Force at San Jose State.

9: Boise State has won 9-straight home games over Utah State (only loss there in 1996)

Tune in to this one to see if each team’s biggest strength can expose the other team’s biggest weakness. In one corner, it’s Tulane’s No. 10 nationally ranked rushing attack and in the other it’s UCF’s No. 68 (out of the 77 FBS teams who have posted stats in 2020) ranked rushing D. When the ball switches sides, it’s the Knights’ No. 1 ranked passing offense vs. a Green Wave defense ranked No. 65 against the pass. It amounts to the best rushing attack in the AAC taking on the second to worst rushing D – and – the best aerial attack in the league doing its thing vs. the second to worst passing D. Prepare to be entertained! Keep an eye on Tulane’s pair of running backs – sophomore Cameron Carroll (#20) and senior Stephon Huderson (#5) – combined they’ve rushed for 593 yards and nine TDs. For UCF, it’s the No. 1 quarterback AND receiver in the FBS – sophomore QB Dillon Gabriel (#11) and senior WR Marlon Williams (#6).

Don’t let Pitt’s 3-3 record fool you, this is a team with an elite defense that’s going to keep things interesting. The Panthers are ranked No. 16 in scoring nationally and are currently No. 1 in the FBS vs. the run. It sets up for an epic strength vs. strength matchup against a Notre Dame offense that has posted impressive numbers on the ground (No. 7 in the FBS) but not so much through the air (No. 64 out of the 77 FBS teams in action). If Pitt can effectively shut the Irish down, this potential upset may be decided by the Panther’s passing attack, ranked No. 20 in the FBS and No. 4 in the ACC (the starting QB, Kenny Pickett didn’t play in last week’s loss to Miami Fla. and may be out again this week). Players to watch include Notre Dame sophomore RB Kyren Williams (#23) (No. 6 in the nation in rushing yards per game) and senior Pitt DL Patrick Jones II (#91) (No. 1 in the FBS in sacks and tied for No. 4 in tackles for a loss).

Hidden in the statistical archives of Penn State’s 11-2 finish in 2019 was a defense that struggled to a No. 100 finish vs. the pass. Only Maryland was more generous through the air in the Big Ten. Coming into this season, PSU returns a mere five starters on defense, included in the losses are three of the top five tacklers and two members of the secondary. It makes for an interesting opener vs. Indiana, which returns eight starters (including the QB, top three receivers and three lineman) to an offense that finished 2019 ranked No. 15 nationally and No. 2 in the Big Ten in passing yards per game. Could this be an upset waiting to happen? Keep an eye on Indiana sophomore QB Michael Penix, Jr. (#9) and senior WR Whop Philyor (#1).

Another Week 8 strength vs. strength extravaganza, tune in to this one to watch SMU’s No. 7 nationally ranked scoring machine (averaging 42.6 points per game) try and find the endzone vs. Cincinnati’s No. 6 ranked – again that’s a national number – scoring D (allowing a mere 12.3 points per game). Though both sides have found success on the ground – the Mustangs are No. 19 in the FBS in rushing offense while the Bearcats are No. 30 vs. the run – the real show should be through the air. SMU is currently No. 5 in passing yards per game while Cincinnati is No. 11 vs. the pass. This ought to be one of the best games of the week. People you need to know about include SMU senior QB Shane Buechele (#7) (No. 2 in the FBS in total passing yards) and the Cincinnati cornerback trio of senior Coby Bryant (#7), sophomore Arquon Bush (#9) and sophomore Ahmad Gardner (#12) – each of these guys has already clocked two interceptions in 2020.

What sets the Golden Screwdriver apart from all the other FBS rivalry trophies is that it’s not an official part of the game its associated with. At least not yet. It’s also got perhaps the best backstory combined with the least savory aesthetics. It all began at the 2002 Hawaii at Fresno State game, when then Warrior head coach June Jones claimed to have been hit in the head by a screwdriver hurled from the stands at the end of his team’s 31-21 win. The trophy, a golden screwdriver implanted in artificial turf on a rustic wooden base, “commemorates” the altercation. Its creation is the result of a Fresno radio station’s call for listeners to design an annual award for the rivalry game.

One of the three FBS Governor’s Cups, Kansas’ version has been awarded to the winner of the football edition of the Sunflower Showdown since 1969. The Jayhawks and Wildcats have played consecutively since 1911 and from 1902-39 competed for an earlier award called the Governor’s Trophy. K-State has won 30 Cups vs. Kansas’ 20, the 1987 game ended in a tie.

The self-proclaimed “oldest trophy game in FBS college football” the Little Brown Jug debuted in 1909. Legend has it that the jug itself dates to 1903 when Minnesota – boasting a perfect 10-0 record – hosted a Michigan squad on a 29-game winning streak. Fielding Yost, the Wolverines’ head coach, doubted that the Golden Gophers would provide sanitary water for the visitors and had the team’s manager visit a Minneapolis store to purchase a five-gallon water jug. The game ended in a 6-6 tie, with Minnesota scoring a touchdown on the final play. Pandemonium ensued, and Michigan left the jug behind. The Gophers painted the score on the vessel and hung it from the coaches’ office ceiling.

The two teams didn’t meet again until 1909, when the Wolverines hit the road again and won 15-6. Not only did it give them the right to finally return home with their Jug – it kicked off a 108-year old tradition. Michigan has won the vessel of victory 71 times vs. Minnesota’s 23, the 1950 and 1933 games ended in ties.

Maryland’s road trip to play Northwestern this Saturday night (7:30pm EST, BTN), gives it an opportunity to win its first ever football game in the state of Illinois.

The Terrapins have only visited the Land of Lincoln twice in its 128-year football history, suffering losses on both occasions. The first came 94 years ago, in 1926, when Maryland (as a member of the Southern conference) visited Chicago (the Maroons were founding members of the Big Ten until they cancelled football in 1939) and suffered a 21-0 loss. Most recently, the then No. 15 Terps made their way to DeKalb for the 2003 season opener and were upset 20-13 by Northern Illinois.

This weekend’s road trip also marks the first time Maryland has visited the state of Illinois for a football game since leaving the ACC to join the Big Ten in 2014. The Terps hosted Northwestern in 2017 (a 31-27 loss) and Illinois in 2018 (a 63-33 win).