Breaking down Week 8 of the 2018 college football schedule 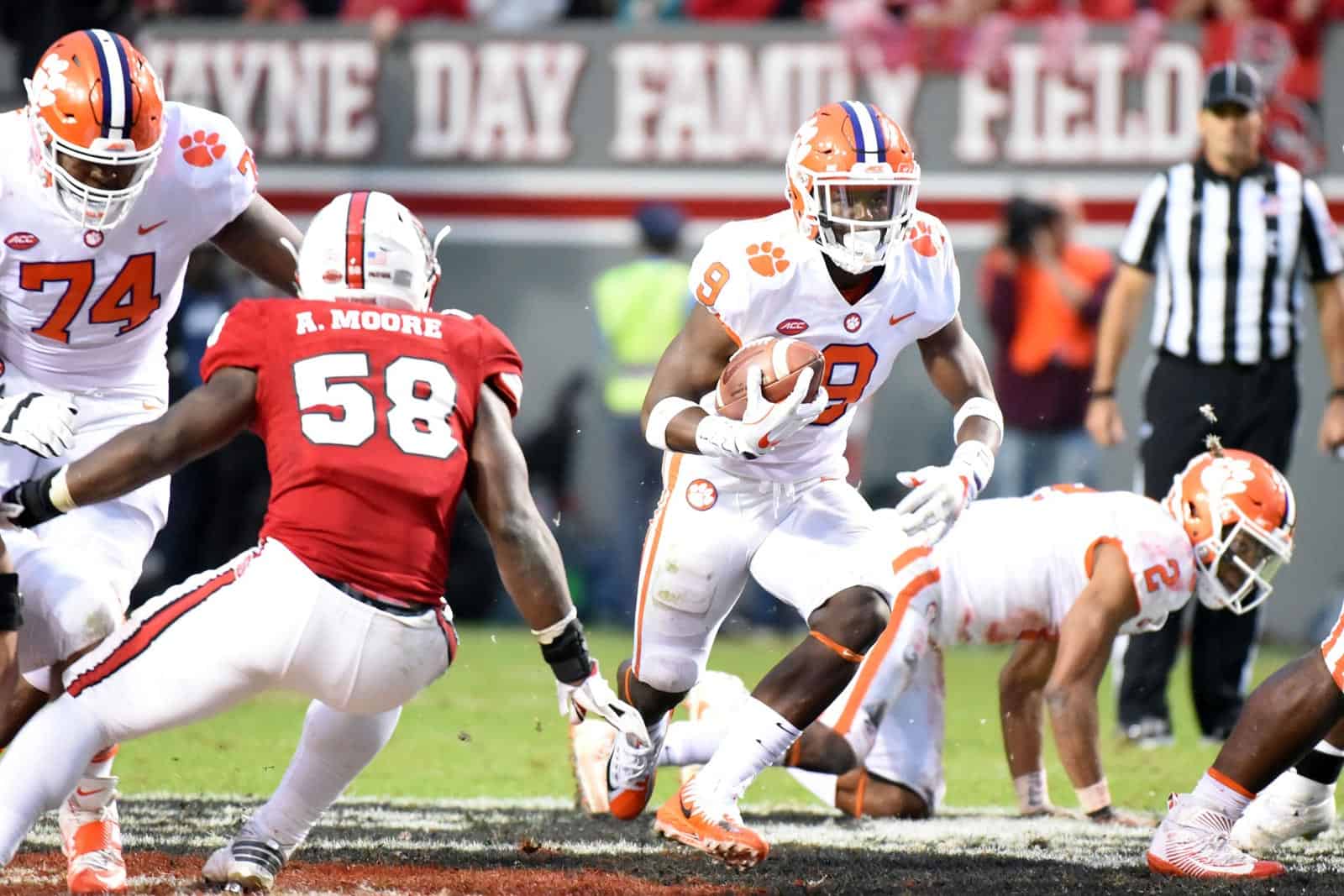 After a wild Week 7 that included losses by the AP’s No. 2, No. 6, and No. 7 teams, Week 8 of the college football schedule features three members of the new Top Ten squaring off with a ranked opponent.

While there are two games apiece on Thursday and Friday night, none include a Top 25 program. The best option on Thursday is Stanford at Arizona State at 9pm on ESPN. On Friday, tune it to ESPN2 at 9pm EST to watch Colorado State’s struggling secondary (No. 93 in the FBS) take on a Boise State passing attack ranked No. 10 in the nation.

Saturday features something delicious in every time slot. Crank up your set early for (6) Michigan at (24) Michigan State at Noon EST on FOX to see if the Spartans’ No. 1 ranked rushing defense can contain the No. 9 back in the country in UM senior RB Karan Higdon (#22). Though there are several decent alternatives, check out (9) Oklahoma at TCU on ABC, also at Noon EST.

In the mid-afternoon it’s the only battle of undefeated teams in Week 8 – (16) NC State at (3) Clemson on ESPN at 3:30pm EST. More details can be found below in our “Perfect Storms” segment. Keep in mind that CBS has (1) Alabama at Tennessee during the same time slot.

Primetime starts early with (22) Mississippi State at (5) LSU at 7pm EST on ESPN, featuring two of the best defenses in the land – the Bulldogs are ranked No. 1 nationally in scoring (12.7 points per game) while the Tigers come in at No. 17 (16.9). Just 30 minutes later, (12) Oregon at (25) Washington State kicks off on FOX. Tune in to see if the Ducks’ secondary – ranked No. 90 in the nation – can contain the No. 1 passing attack in the Americas.

Why would you choose to watch two struggling MAC teams on a Saturday? How about to see the No. 7 wide receiver in college football take on the third-worst pass defense in the FBS. Yes, it’s Bowling Green senior wide receiver Scott Miller (#21), one of only 11 guys in the nation averaging more than 100- receiving yards per game (106.7) vs. an Ohio Bobcat defense generously allowing 327.2 yards per game through the air. Only UConn and Houston have coughed up more.

On paper, this matchup has all the elements of an epic battle for the ages. First up, it’s Clemson’s No. 4 ranked rushing attack – headlined by sophomore running back Travis Etienne (#9), the No. 5 rusher in the FBS – taking on a NC State defense ranked a lofty No. 13 vs. the run. If that weren’t enough, flip the field and it’s a Wolfpack passing attack ranked No. 6 – in the nation – in yards per game squaring off with a Tiger secondary ranked No. 6, again nationally, against the pass. NC State is led by senior quarterback Ryan Finley (#15), No. 6 in passing yards per game (324.2) and junior wide receiver Kelvin Harmon (#3), also No. 6 in receiving yards per game (106.8).

Though we highlighted South Florida’s junior running back Jordan Cronkrite (#2) last week, we mention him again because he’s got what might be the best opportunity for any one player to make a statistical statement in Week 8. Averaging a cool 151. 4 rushing yards per game, Cronkrite is the No. 3 back in college football, just behind Wisconsin’s Jonathan Taylor at 158.33. On Saturday night, he’ll do his thing against a UConn defense ranked No. 129 – or second to last nationally – vs. the run. The Huskies have held only one of their six opponents to under 200 ground yards – limiting FCS Rhode Island to 199 in a 56-49 win, also their only victory thus far.

After losing three-straight games to kick-off its 2018 campaign, Purdue hosts (2) Ohio State fresh off scoring consecutive wins over Boston College, Nebraska and Illinois. Though the Boilermaker defense is a respectable No. 44 nationally in scoring and No. 54 vs. the run, they’re a questionable No. 109 against the pass. This doesn’t match-up well with an Ohio State offense that’s been more successful through the air than on the ground. The Buckeyes are currently No. 3 nationally in passing yards per game (371.4) – just behind No. 1 Washington State (413.7) and No. 2 Texas Tech (373.3). Compare that to their No. 52 rank in rushing yards per game. Though Purdue might keep things interesting, look for Ohio State sophomore quarterback Dwayne Haskins (#7) – the No. 4 passer in the nation – to put up Heisman-like numbers regardless of the final score.

The $5 Bits of Broken Chair Trophy – Minnesota at Nebraska – series started in 1900 – Minnesota leads all-time 32-24 but the two have split the last six.

Heralded by some as the “best CFB trophy of the modern era” the $5 Bits of Broken Chair dates back to only 2014 when Minnesota’s mascot and Nebraska’s fake coach (now ex-fake coach) exchanged words on Twitter. Basically, @GoldyGopher challenged @Faux Pelini to a “friendly wager.” How did the usurper coach respond? “Ok how about if we win you give me $5, if you win I get to smash a wooden chair over your back.”

An actual firearm, Bridger’s Rifle (a .50-caliber Rocky Mountain Hawken rifle) honors Jim Bridger, the “foremost mountain man in the history of the American West.” One of the first Americans to visit the territory that became Yellow Stone National Park, Bridger also is credited with discovering the Great Salt Lake. “Bridger’s Battle” started in 2013, the winner of the rivalry’s name inscribed on the maple stock of the rifle. Utah State has won the gun three times vs. Wyoming’s two.

First presented in 1953, the Paul Bunyan was donated by then Michigan governor Gerhard Mennen Williams to honor Michigan State’s inaugural season in the Big Ten. All-in-all, the trophy is a whopping nine-feet tall, featuring Bunyan standing with one foot on each side of the state, each school’s flag claiming its half. The Wolverines have earned 36 Bunyan’s vs. the Spartans’ 27. The 1958 and 1963 games both ended in ties.

The Textile Bowl Trophy was first introduced in 1981, a “part of a joint marketing effort by the textile commissions of both North Carolina and South Carolina…State and Clemson boast two of the largest, most respected textile schools in the country and have similar academic missions.” The Tigers have captured the weavers’ prize 27 times vs. the Wolfpack’s 10.

An actual trophy as opposed to an actual weapon, this traveling prize honors the cannons that both schools traditionally discharge on game days. It was first awarded in 2008 to the winner of what’s also known as the “Central-Western” rivalry. Each team has won the Cannon five times apiece.

It’s also the second leg of the three-pronged Michigan MAC Trophy, awarded since 2005 to the annual victor in the Central Michigan/Eastern Michigan/Western Michigan series. WMU defeated EMU 27-24 on Oct. 6, meaning a win over CMU would earn the Broncos would earn their fifth all-time Michigan MAC title. If the Chippewa’s prevail, they’ll need a win at EMU on Nov. 3 to seal their second-straight major prize.

Dating to 1946, the tale of the Wagon Wheel was first spun by Kent State Dean Raymond Manchester. He claimed he had possession of a buggy wheel that had belonged to the founder of the institution that eventually became the University of Akron. Though Manchester valued the Wheel, he stated he was “willing to put it up as a trophy,” because “there’s no danger of losing it.” Though bold, he was correct, at least in the short term. Kent State won the first 10 Wheels but last year’s 24-14 Akron victory finally tied the contest up at 23 Wheels apiece. The two schools are located only 12 miles apart, south of Cleveland, Ohio.

Arkansas and Tulsa meet this Saturday for the first time since 2012. Though this might not seem significant from a national perspective, it represents the renewal of one of the longest-running rivalries in college football.

The Razorbacks and Golden Hurricane played each other consecutively from 1957 to 1990, from 1933 to 1955 and 11 times from 1899 to 1930. This year’s game marks the 74th time the two have clashed. For Arkansas, that’s comparable to its 75-game series with Texas A&M, who it shared membership with in both the Southwest Conference and now the SEC. For Tulsa, it’s the most they’ve played any other team in the nation – Oklahoma State, which it’s met 73 total times, is a close second.

The Hogs hold a commanding 54-16-3 lead and have won 18 straight. This is due at least in part to the last 41 games being played in Arkansas. The most recent meeting in Tulsa was 64-years ago in 1952.

The two campuses are located a mere 110 miles from one another, a direct east/west drive on US-412.

Thanks for the details of the upcoming games! You are right, you can’t make some of that stuff up!! Ha!! Thanks again for keeping up informed!! Thanks for the Texas Tech shoutout too!!