Breaking down Week 7 of the 2021 college football schedule 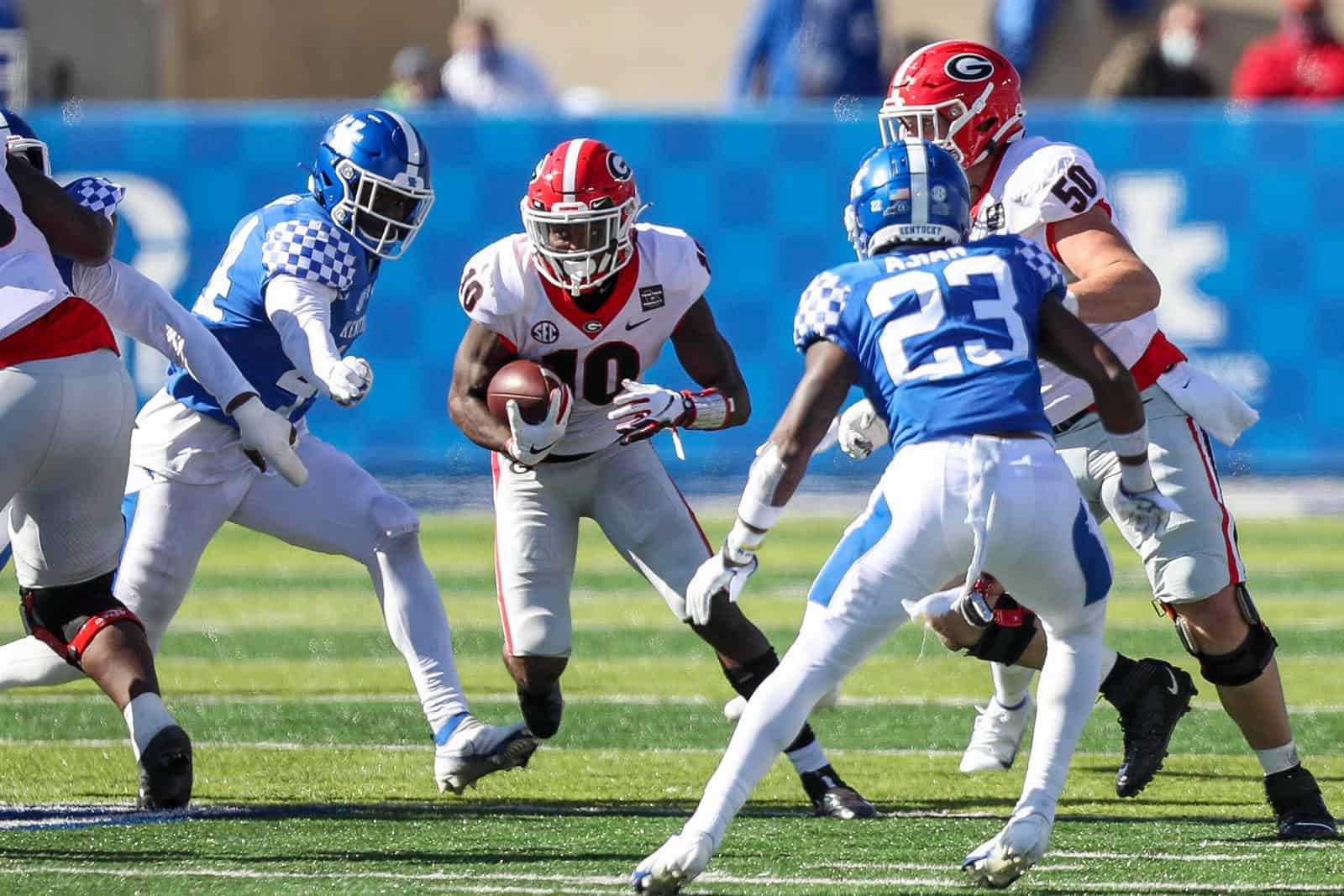 After four unbeaten teams fell from perfection last week, Week 7 of the college football schedule is headlined by a battle between two of the only 13 remaining unblemished clubs. It adds up to a money-back guarantee that, at the very least, one additional squad will fall from grace.

The golden hour is Saturday at 3:30pm ET when (11) Kentucky visits (1) Georgia on CBS. Of the 11 other perfect squads still standing only one – (12) Oklahoma State – will face a member of the Top 25 this week. That leaves four unbeatens hosting a conference opponent, two playing a roadie at a league foe and four with the week off. UTSA – at 6-0 – is the only perfect team that isn’t ranked.

All in all its 52 games with only one – Yale at UConn, an in-state reunion 22-years in the making –featuring an FCS club.

Tune in to this one to see the most generous pass defense in the FBS (Georgia Southern is allowing 338 air yards per game) try and contain the league’s No. 8 receiver – South Alabama junior WR Jalen Tolbert (#8).

Syracuse is quietly ranked No. 11 in the nation and No. 1 in the ACC in rushing offense. It’s a strength that pairs up well against a Clemson D that is currently No. 21 in the FBS and No. 3 in the ACC vs. the run. Where the Orange are fresh off hanging up 354 ground yards and three scores on (16) Wake Forest, the Tigers gave up a meager 46 yards rushing in their last outing vs. Boston College. Though the star of the ground game is Syracuse freshman RB Sean Tucker (#34) (No. 2 in the FBS in yards per game) don’t miss out on Orange senior DL Cody Roscoe (#18) (tied for No. 2 in the FBS in sacks and No. 6 in tackles for a loss).

In a tale of two defenses, on one hand Auburn gave up 90 and 33 rushing yards respectively to (7) Penn State and LSU while on the other it coughed up 267 and 201 to Georgia State and (1) Georgia. Cue up Arkansas – currently ranked No. 10 in the FBS in rushing yards per game – and things get interesting. Will the real Auburn defense please stand up?

Kentucky is a three-touchdown underdog but has the No. 5 back in college football in junior RB Chris Rodriguez Jr. (#24). Look for his skills to be severely tested vs. a Georgia defense ranked No. 4 in the FBS against the run, giving up, on average, 67 ground yards per game.

Iowa’s meteoric rise has been powered by an elite defense ranked No. 4 nationally in scoring, No. 10 vs. the run and No. 22 vs. the pass. What Purdue brings to the table is the tenth most prolific passing attack in the FBS, averaging 325.4 yards per game – that’s just 26 yards fewer than (6) Ohio State. It’s also the best pass offense the Hawkeyes have faced thus far this year.

Vanderbilt sophomore QB Ken Seals (#8) has already thrown seven interceptions this season, tying him for the third most in the nation. Cue up South Carolina, home to senior DB Jaylan Foster (#12) who with four picks in six games is tied for the most interceptions in the land, and this could be the “pick” of the day.

While the big question might be whether Tennessee’s D (ranked No. 12 in the SEC vs. the pass) can contain Ole Miss’s air raid attack – ranked No. 19 in the FBS – there’s more to this matchup. The Volunteers are the owners and operators of the sixth best rushing team in the entire nation, averaging a cool 254 yards per game. It’s a number that’s only been compromised twice – 136 vs. Pitt and 148 at (20) Florida – also Tennessee’s only losses this season. Enter in Ole Miss – ranked No. 108 nationally and No. 12 in the league vs. the run – and it might be a delightful evening of scoring, through the air and on the ground, in Knoxville.

Perhaps the most under-the-radar strength vs. strength matchup of the 2021 season, tune in to see Army’s option attack – ranked an unsurprising No. 2 in the nation in rushing yards per game – take on a Wisconsin D ranked No. 1 vs. the run. Where the Black Knights are averaging 318 ground yards per game the Badgers are allowing 41. While you’ve got to figure that the Big Ten program (with more access to valuable resources) has a huge advantage, this pairing is what college football could be.

These two teams’ strengths pair ever so well with one another’s biggest weaknesses. First up, it’s Virginia’s super-charged passing attack (the second-best unit in the entire nation) taking on a Duke D ranked No. 106 nationally and No. 13 in the ACC vs. the pass. On the flip side it’s the Blue Devils ground game (No. 19 in the FBS and No. 2 in the league) against the most generous rushing defense in the ACC. Players to watch include Cavalier junior QB Brennan Armstrong (#5) (No. 2 in the FBS in passing yards per game) and Duke senior RB Mataeo Durant (#21) (tied for No. 2 in the FBS in rushing yards per game).

After hanging up a season-high 463 air yards and six passing TDs on New Mexico State last week, this week Nevada draws Hawaii – the second-most generous passing defense in the Mountain West. Only 11 teams in the entire nation have allowed more air yards per game than have the Warriors. Check out Wolfpack junior QB Carson Strong (#12), he’s No. 9 in the FBS in passing yards per game and leads the No. 8 ranked air attack in college football.

Awarded since 1950, legend has it that the Spittoon was originally purchased at a Lansing antique store by Michigan State grad Gene McDermott. But why? Well, “in order to avoid a letdown in the game against Indiana just a week after knocking off rival Notre Dame.” Did it work? Absolutely – the Spartans blanked the Hoosiers 35-0 and took possession of the Spittoon first. MSU has won Ye Ole’ Spit Cup 49 times vs. Indiana’s 13, the 1977 game ended in a tie.

(19) BYU’s visit to Baylor this Saturday is one of two matchups this season that previews the new-look Big 12. The other, Texas Tech at Houston, happened in Week 1, a 38-21 road win for the Red Raiders.

While it’s not known when each of the four new members (BYU, Cincinnati, Houston, and UCF) will officially begin playing a Big 12 slate there are currently seven future “conference” matchups on the books.

While Cincinnati will continue to play Houston and UCF as fellow AAC members, the Bearcats have no future dates currently booked with BYU or a Big 12 club.