Breaking down Week 7 of the 2019 college football schedule 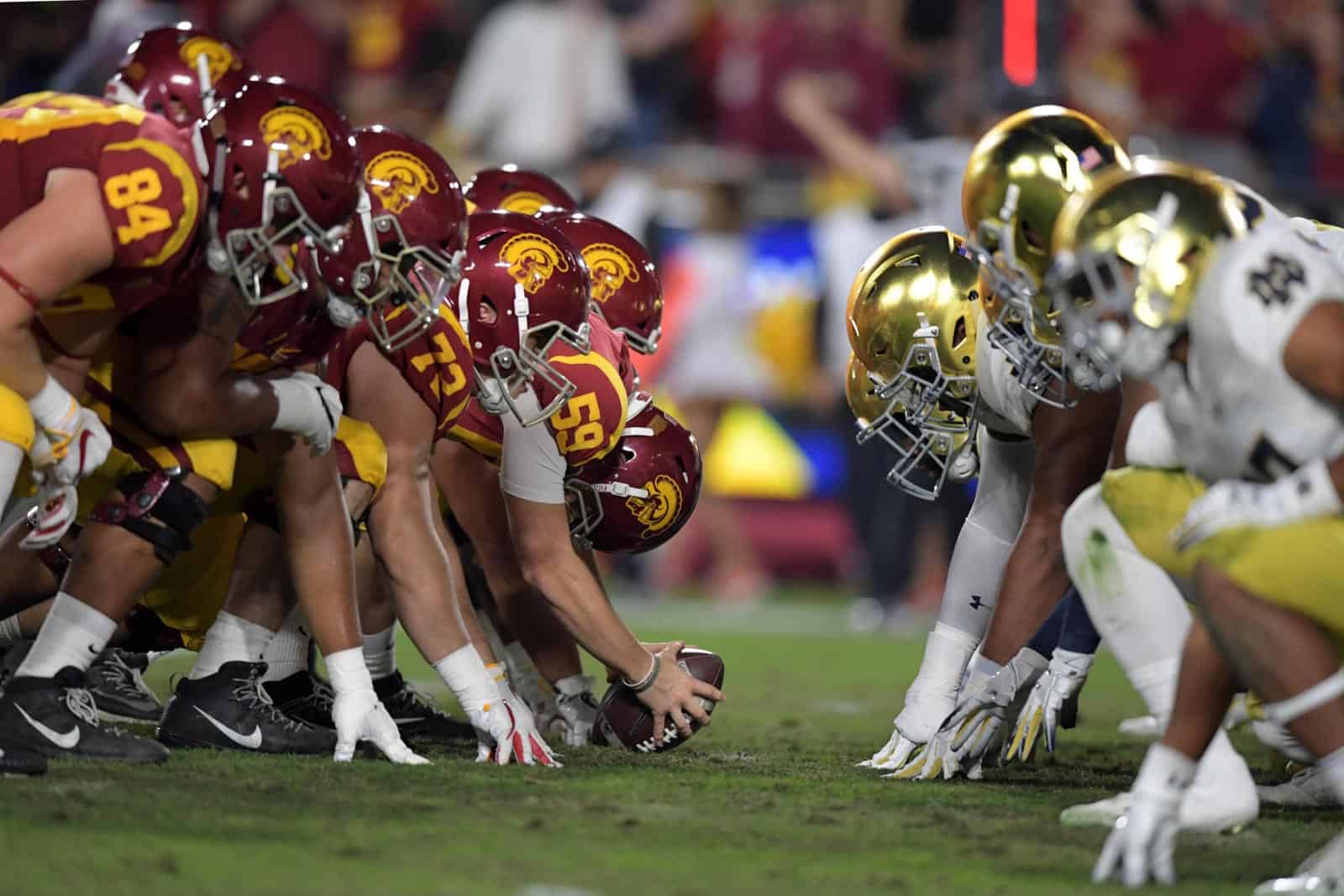 Of the nine undefeated teams remaining in the current AP Top 10, five will play ranked opponents in Week 7. The “other” three such programs (besides No. 3 Ohio State, which is off) will face unranked but dangerous opponents Florida State, South Carolina, and Michigan State.

It amounts to Saturday, Oct. 12 being the best opportunity, thus far, for a major reshuffle at the top of the rankings. This becomes even more significant with the first CFP rankings looming on Tuesday, Nov. 5.

The week kicks off early with the first Wednesday night game of the season – App State at Louisiana on 8pm EST on ESPN2. Before you poo-poo this one, keep in mind it’s a rematch of the 2018 Sun Belt title game and it features an intriguing matchup between the Ragin’ Cajuns No. 1 ranked rushing attack (that’s a national ranking) and a Mountaineer rushing D ranked No. 80.

That leaves five other games before Saturday, two on Thursday night, and three on Friday. The action kicks off at 8pm EST on ESPN on both nights.

Week 7’s version of Saturday is one of those days you can literally watch football for 12-hours straight with quality and quantity on offer at every turn of the dial. The anchor of the early time slot is (6) Oklahoma vs. (11) Texas on FOX at Noon EST. Keep an eye on South Carolina at (3) Georgia on ESPN at the same time.

In the mid-afternoon it’s (1) Alabama at (24) Texas A&M at 3:30pm EST on CBS – the first time the Crimson Tide will play a ranked opponent this season. Also worth noting are Florida State at (2) Clemson (ABC) and Michigan State at (8) Wisconsin (Big Ten Network) at the same time. Though the Tigers (-21.5) and Badgers (-10.5) are big favorites, the Seminoles and Spartans have the talent to keep things interesting.

Primetime is literally oozing with goodness, to the point that you may want to buy two extra bags of ice. First up, it’s (10) Penn State at (17) Iowa at 7:30pm EST on ABC, that pairs well, with the kickoff, 30 minutes later, of (7) Florida at (5) LSU on ESPN. You’ll want to check the score of USC at (9) Notre Dame over on NBC as the evening progresses and set your remote accordingly.

Tune in to this one to see the No. 8 running back in the nation take on a rush defense that’s ranked No. 121 in the FBS. On one side it’s ULM’s junior RB Josh Johnson (#8) who’s rushed for 100-plus three times this season and on the other it’s a Texas State D that’s given up 200-plus rushing yards on three occasions. Johnson hung up 126 yards on Florida State in Week 2 and the Bobcats allowed 390 yards and five rushing scores to SMU in Week 3.

Oklahoma and Texas both have top ranked passing offenses this season – the Sooners at No. 5 nationally and the Longhorns at No. 17. The difference comes against the pass where Oklahoma is a respectable No. 37 in the FBS while Texas is a lowly No. 126. Only four teams in the entire nation have given up more passing yards than have the Longhorns who have allowed, on average, 325 yards per game. Not only did (5) LSU torch Texas through the air with 471 yards, Louisiana Tech rang up 340 passing yards in the opener and West Virginia scored 367 yards last weekend. Oklahoma senior QB Jalen Hurts (#1) is ranked No. 1 nationally in passer rating (231.31) and No. 6 in yards per game (304.6).

Toledo is quietly off to a 4-1 start, its only misstep a 38-24 loss to Kentucky in the opener. What’s fueled the offense is a rushing attack that’s currently ranked No. 9 in the nation, sandwiched between Army at No. 8 and Wisconsin at No. 10. The Rockets are averaging 264.8 ground yards per game and are coming off back-to-back wins over BYU (242 rushing yards) and Western Michigan (275 rushing yards). This sets up well vs. Bowling Green, ranked No. 122 in the nation in rushing D. The Falcons coughed up 333 rushing yards and five scores to Kansas State in Week 2 and 375 and three scores to Kent State in Week 4. Keep an eye on Toledo sophomore RB Bryant Koback (#22), No. 4 in the FBS in yards per game (125.6).

The $5 Bits of Broken Chair Trophy – Nebraska at Minnesota – series started in 1900 – Minnesota leads 32-25-2 but Nebraska has won three of the last four.

Heralded by some as the “best CFB trophy of the modern era” the $5 Bits of Broken Chair dates back to only 2014 when Minnesota’s mascot and Nebraska’s fake coach (now ex-fake coach) exchanged words on Twitter. Basically, @GoldyGopher challenged @FauxPelini to a “friendly wager.” How did the usurper coach respond? “Ok how about if we win you give me $5, if you win, I get to smash a wooden chair over your back?”

Awarded to the annual winner of the Red River Showdown (also known as the “Red River Rivalry/Classic/Shootout”), the Golden Hat dates back to 1941 when the Texas State Fair presented it to the rivalry. Originally called the “Bronze Hat,” it was upgraded to the gold standard in 1969. According to Lost Letterman, it’s also never been stolen, lost, broken or vandalized. The Longhorns have worn the hat 40 times vs. the Sooners’ 35. The game ended in a tie in 1995, 1984 and 1976.

Dating to 1946, the tale of the Wagon Wheel was first spun by Kent State Dean Raymond Manchester who claimed he had possession of a buggy wheel that had belonged to the founder of the institution that eventually became the University of Akron. Though Manchester valued the Wheel, he stated he was “willing to put it up as a trophy,” because “there’s no danger of losing it.” Though bold, he was correct, at least in the short term – Kent State won the first 10 Wheels, but since then it’s been mostly Akron, the Zips winning 23 of the last 36. The two schools are located only 12 miles apart, south of Cleveland, Ohio.

Both FBS teams from the state of Washington will be in Arizona in Week 7, a scheduling twist that’s only happened twice previously and not in 17 years.

Finally, if both Washington teams win it will mark the first time ever that the pair has won on the same date in the state of Arizona.