Breaking down Week 6 of the 2018 college football schedule 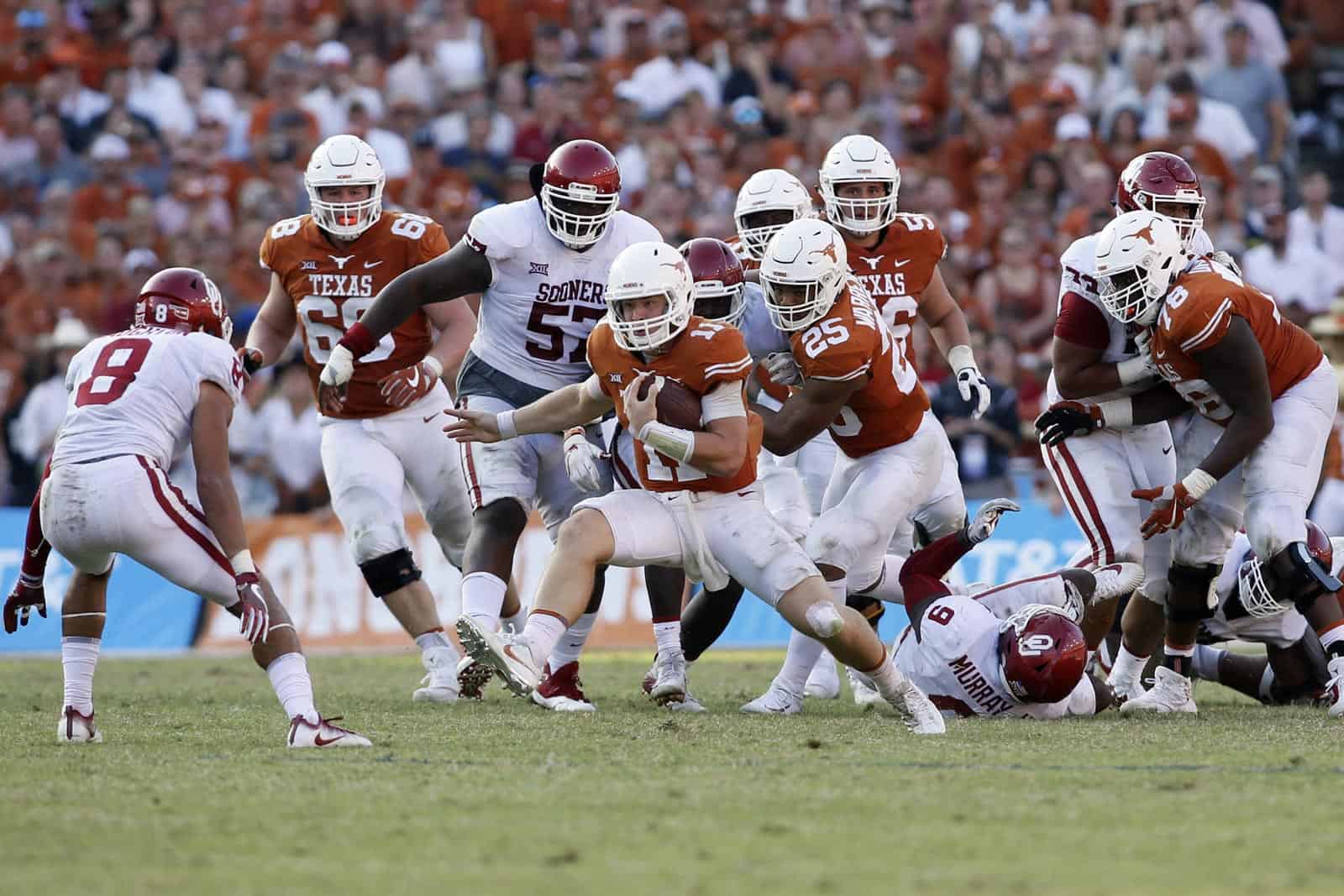 Though Week 6 of the college football schedule doesn’t offer the Top Ten matchups we enjoyed last week, it does feature three of the only 12 remaining undefeated teams in the nation taking on a ranked opponent away from home.

The only Power vs. Power matchup prior to the weekend is Georgia Tech at Louisville on Friday night at 7pm EST on ESPN. While not necessarily “must-see” TV, it should be interesting to see the Cardinals’ No. 83 ranked rushing D – the fourth most generous unit in the ACC – grapple with the Yellow Jackets’ triple-option offense, currently ranked No. 2 nationally in rushing yards per game.

Unlike last weekend, the goodness is spread out evenly over Saturday with something meaningful in every time slot. Tune in early to watch (19) Texas take on (7) Oklahoma at Noon EST on FOX, but don’t forget to keep an eye on Maryland (3-1 and fresh off a bye after a 42-13 beatdown of Minnesota in Week 4) at (15) Michigan on ABC.

The midafternoon belongs once again to CBS, carrying (5) LSU at (22) Florida at 3:30pm EST. Don’t sleep on (4) Clemson at Wake Forest at the same time on ESPN, the Demon Deacons may be 16-point underdogs, but they also have the second-best rushing attack in the ACC.

The pick of the litter in primetime is (6) Notre Dame at (24) Virginia Tech at 8pm EST on ABC. Just prior to that (8) Auburn visits Mississippi State and its No. 8 ranked scoring defense (that’s a national ranking) at 7:30pm EST on ESPN2.

There is also a plethora of rivalry games this week, check out the “Hardware up for grabs” section for the 411 on the whopping nine trophies on the line.

7: Pitt has won 7-straight home games over Syracuse (last loss there in 2001)

With a 3-1 record, Boise State’s aerial attack isn’t receiving the national attention it would have had the Broncos remained unscathed and in the Top 25. BSU is ranked a lofty No. 4 in the FBS in passing yards per game (362), placing it between West Virginia at No. 3 and Houston at No. 5. This week it’ll square off with a San Diego State defense ranked No. 110 in the FBS vs. the pass. The Aztecs coughed up 236 yards through the air last weekend in a narrow 23-20 win over Eastern Michigan. Keep an eye on senior Boise State quarterback Brett Rypien (#4), he’s No. 3 in the nation in passing yards per game (347.3).

The Wildcats and Aggies’ reunion on the gridiron offers up two potential statistical storms. First, it’s a strength vs. strength battle pitting Kentucky’s No. 11 ranked rushing attack taking on a Texas A&M defense that’s currently ranked No. 6 – nationally – vs. the run. It means the Aggies – who have allowed a paltry 85 ground yards per game in 2018 – own the top ranked rushing defense in the SEC. Even more impressively is who they’ve built their resume against – giving up a mere 115 rushing yards to (4) Clemson in Week 2 and only 109 to (1) Alabama in Week 4. Usher in Kentucky – averaging 259.2 ground yards per game – also No. 1 in the SEC – and this one has all the makings of a classic. Check out Wildcat junior running back Benny Snell, Jr. (#26) – the No. 4 rusher in college football averaging 132.8 yards per game.

If that weren’t enough, did you know that only four teams in the entire FBS have allowed more sacks than Texas A&M has this season with 17? It makes a tasty scenario for Kentucky senior linebacker Josh Allen (#41) – with six sacks thus far he’s tied for the second most in the nation. It’s the best mark in the SEC (the most individual sacks recorded thus far) vs. the worst (the most sacks allowed).

First awarded in 2008, the Bronze Stalk “depicts several cornstalks recognizing the Midwestern landscape surrounding DeKalb and Muncie.” Ball State captured the first-ever stalk but has sent home the sheaf with NIU every year since.

The first leg of the three-way contest between Army, Navy and Air Force, the Commander in Chief was established in 1972 to ensure that the newer Air Force Academy (which kicked off football in 1957) would play Navy and Army (both dating back to 1891) annually. The Falcons lead the way with 20 trophies, followed by the Midshipmen with 15 and the Black Knights with 7. Army won the trophy last season for the first time since 1996.

Army hosts Air Force on Nov. 3 and meets Navy in Philadelphia on Dec. 8.

Perhaps the most uniquely named CFB award, the Floyd of Rosedale is a bronze statue of a pig honoring an actual pig. The original animal was the price of a 1935 bet on the game between Minnesota Governor Floyd Olson and Iowa Governor Clyde Herring. The pig, a prize hog, hailed from Rosedale, Iowa.

The Golden Gophers won the real pig in a 13-6 decision, ultimately finishing the season 8-0 and capturing the second of three consecutive national titles. Since then, Minnesota has brought home the bronze edition of Floyd 41 times vs. Iowa’s 39. The 1970 and 1951 contests both ended in ties.

The Freedom Trophy – Nebraska at (16) Wisconsin– series started in 1901 – Wisconsin leads 8-4 and has won five straight.

The Freedom Trophy debuted in 2014, “paying tribute to the brave men and women who have fought in our nation’s wars.” The trophy itself depicts one half each of Wisconsin’s Camp Randall Stadium (built on a Civil War training ground) and Nebraska’s Memorial Stadium (dedicated to veterans). An American flag rises out of the conjoined arenas. The Badgers have won all four games where The Freedom Trophy was on the line.

Awarded to the annual winner of the Red River Showdown (also known as the “Red River Rivalry/Classic/Shootout”), the Golden Hat dates back to 1941 when the Texas State Fair presented it to the rivalry.  Originally called the “Bronze Hat,” it was upgraded to the gold standard in 1969.  According to Lost Letterman, it’s also never been stolen, lost, broken or vandalized. The Longhorns have worn the hat 39 times vs. the Sooners’ 35. The game ended in a tie in 1995, 1984 and 1976.

The first leg of the three-way battle for the Michigan MAC Trophy between Central Michigan, Eastern Michigan and Western Michigan. Established in 2005 by the Michigan Sports Hall of Fame, it awards both a football and basketball recipient.

First up for grabs in the BYU-Utah State series is the Old Wagon Wheel, established in 1948 by fraternities at both schools, it honors the Mormon move westward in the mid-19th century, done in covered wagons. BYU has won the Wheel 40 times vs. Utah State’s 24.

Next is the Beehive Boot, the award given to the annual winner three-way rivalry between BYU, Utah and Utah State. The Boot itself, first awarded in 1971, is a 100-year old pioneer boot sourced from where else, the Beehive State (the state’s nickname was chosen because it’s the symbol of hard work and industry). BYU has won 22 boots vs. Utah’s 15 and Utah State’s 9. The Utes have won the last two and three of the last four. The Cougars haven’t worn the boot since 2009.

Utah and BYU close out the regular season on Saturday, Nov. 24 in Salt Lake City. As was the case last season, Utah and Utah State aren’t slated to meet this year. Though the media is supposed to vote in case of a tie, there was no such vote to decide the Boot in 2017.

The Paniolo Trophy –Wyoming at Hawaii – series started in 1978 – Wyoming leads 14-9 and has won seven of the last eight.

“Paniolo” is the Hawaiian word for cowboy. The Paniolo Trophy originated in 1979 when both schools were WAC members and was awarded consecutively until 1997. The original award went missing and was replaced in 2013 when the schools reunited as members of the Mountain West. The newer version features Hawaiian cowboy Ikua Purdy roping a bull. Purdy, who won the steer-roping competition at the Frontier Days Rodeo in 1908, became the first Hawaiian to be inducted into the National Rodeo Cowboy Hall of Fame in 1999.

(13) Kentucky and Texas A&M, scheduled to meet this Saturday evening at Kyle Field, haven’t clashed since 1953, also Bear Bryant’s final season at Kentucky before moving on, ironically, to Texas A&M.

In 1958 Bryant moved on to his alma mater, Alabama, where he would win six national titles in 25 seasons.