Breaking down Week 4 of the 2021 college football schedule 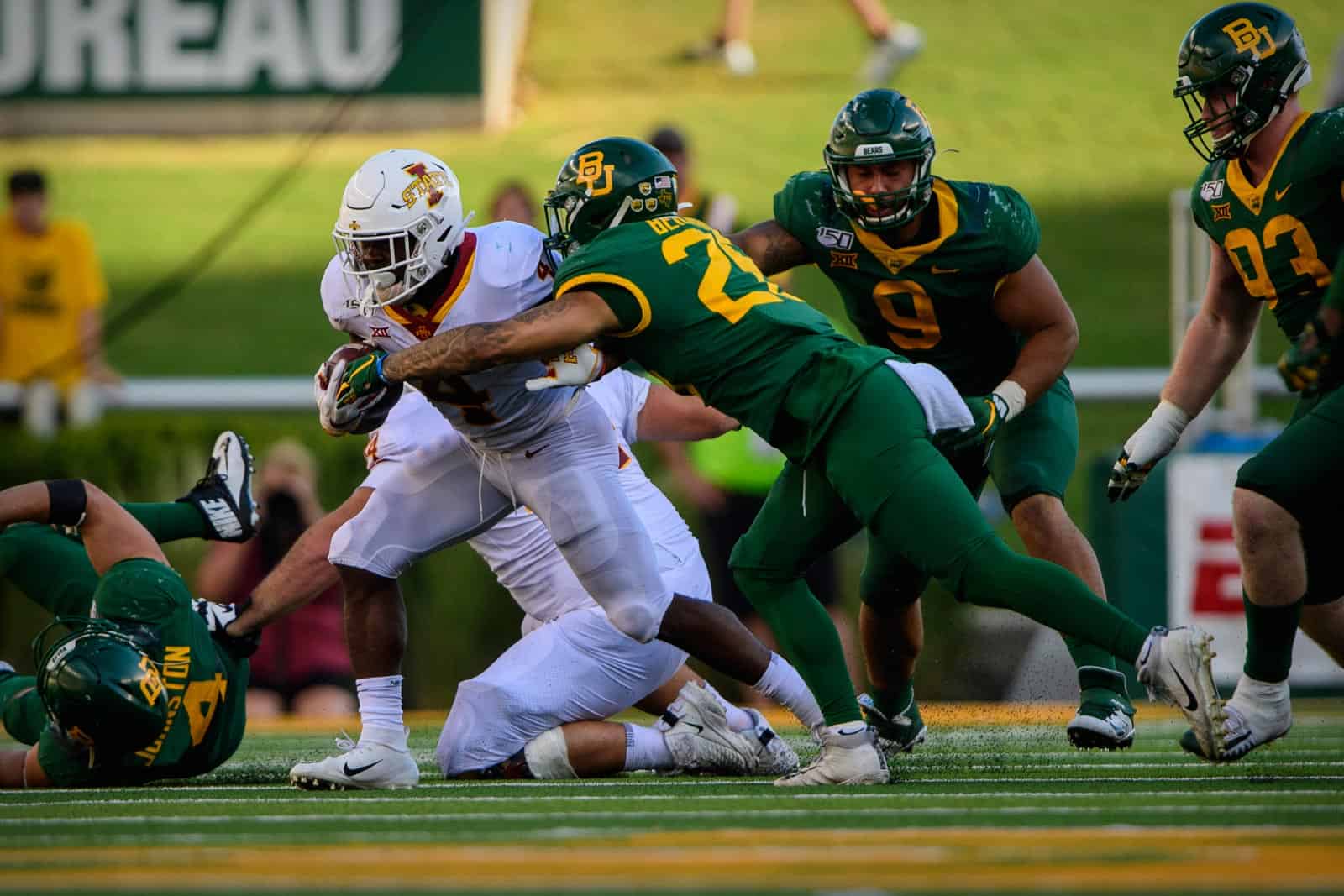 Week 4 of the 2021 college football schedule gets us one step closer to the “regular” part of the regular season. Of the 64 contests on tap this week, 30 – or almost half – are conference games. Also of note, FBS vs. FCS matchups are down to a mere nine (or 13.4% of the total), a far cry from the 37 featured in Week 1.

Though both of this week’s ranked vs. ranked matchups are featured before primetime on Saturday, don’t sleep on the Thursday and Friday night games. All three of the nationally televised offerings are worth watching.

A quality matchup between Wake Forest’s defense (ranked No. 14 nationally in scoring and No. 36 vs. the pass) and Virginia’s passing attack (ranked No. 2 in the entire nation). The Cavaliers junior QB Brennan Armstrong (#5) leads the FBS in passing yards per game while sophomore WR Dontayvion Wicks (#3) is tied for No. 7 in receiving yards per game.

Tune in to this one to see Liberty’s rushing D – ranked a lofty No. 10 in the nation – try and contain the No. 10 back in the land in Syracuse’s freshman RB Sean Tucker (#34). Where the Flames haven’t allowed more than 86 ground yards thus far this season, Tucker’s rushed for 130-plus in two of the Orange’s first three outings.

SMU junior QB Tanner Mordecai (#8) is currently ranked No. 6 in the FBS in passing yards per game while TCU coughed up 309 air yards in its 34-32 win over Cal in Week 2. The Horned Frogs are nine-point favorites, but this one could get interesting.

The Aggies are currently ranked No. 86 in the FBS vs. the run, allowing 226 in the opener vs. Kent State and then 171 against Colorado. Though by no means a true mismatch, how will this look against an Arkansas offense ranked No. 8 nationally in rushing yards per game? The Hogs have been consistent on the ground – 245 yards and four scores vs. Rice, 333 yards and four scores vs. Texas and then 269 yards and three scores vs. Georgia Southern. Though an upset seems unlikely, Texas A&M is only a five-point favorite. What if?

While Iowa State’s offense has gotten a lot more press thus far, Baylor is ranked No. 5 in the FBS in rushing yards per game. It sets up for a fantastic strength vs. strength matchup vs. the Cyclones’ D, currently ranked No. 4 nationally vs. the run.

This hidden gem features UTSA’s passing attack – No. 23 in the nation – taking on a Memphis D that’s given up an average of 400 air yards thus far – the second worst mark in the entire FBS. Both squads have a top-ranked receiver: Roadrunner junior WR Zakhari Franklin (#4) is tied for No. 7 in receiving yards per game while Tiger senior WR Calvin Austin III (#4) is at No. 3.

The Seminoles haven’t started a season with four consecutive losses since 1974, two seasons before Bobby Bowden took over the reins in 1976. Louisville is a two-point favorite and despite some sexier options in the same time slot, this game is worth keeping an eye on.

Though the Gators are favored by 20, their No. 2 nationally ranked rushing offense will have to show up vs. a Tennessee D quietly ranked No. 5 in the FBS vs. the run.

Michigan State junior RB Kenneth Walker III (#9) leads the nation in rushing yards per game (164.3). He hung up 264 yards and four scores on Northwestern in the opener and then rushed for 172 last week in the win at Miami Fla.

After posting a 392-yard, four TD performance vs. Washington State in his collegiate debut last Saturday USC freshman QB Jaxson Dart (#2) is questionable this week with a knee injury. Regardless of whether it’s Dart under center or instead three-year starter Kedon Slovis, it may be a big day for the Trojan offense – Oregon State’s D gave up 300-plus air yards in its first two outings (313 in a loss at Purdue and 366 in a win vs. Hawaii).

After torching (24) UCLA for 455 air yards in its thrilling upset victory last week (22) Fresno State is ranked No. 5 – in the nation – in pass offense. Cue up UNLV – currently ranked No. 115 nationally vs. the pass – and the forecast for Friday night includes lots of yards and points for the Bulldogs. Check out the stylings of FSU senior QB Jake Haener (#9) (No. 4 in the FBS in passing yards per game).

(17) Coastal Carolina’s path to 3-0 has been underscored by a balanced approached on offense. The Chanticleers are currently ranked at No. 12 nationally in scoring, No. 17 in rushing yards per game and No. 38 in passing. Expect those numbers to continue to rise this week vs. a UMass defense tied for No. 128 in the FBS in scoring (only one team has given up more points thus far) and No. 120 vs. both the run and the pass. Players to watch include CCU senior WR Jaivon Heiligh (#6) (tied for No. 7 in the FBS in receiving yards per game) and senior RB Shermari Jones (#5) (No. 19 in the FBS in yards per carry).

After coughing up 307 rushing yards in a 45-7 loss to Baylor last Saturday, this week Kansas travels to Duke – home of the No. 5 running back in the country. The Blue Devils are quietly ranked No. 16 nationally in rushing yards per game, an attack headlined by senior RB Mataeo Durant (#21) who’s seven rushing TDs tie him for the most in the entire nation. It amounts to the No. 2 ground game in the ACC taking on the Big 12’s most generous rushing defense.

One of the three FBS rivalry cannons, the tale of the Big Ten edition of the Cannon stretches back over 100 years ago, to 1905. That’s when Purdue students brought the scaled-down firearm to Illinois with hopes of firing it off after a win. Illini fans found the weapon, hidden near their stadium, and captured it. It was retained by one of the students involved in its confiscation until 1943 when he offered it up to be used as a traveling trophy. The Boilermakers have recaptured the Cannon 37 times vs. Illinois’ 30. The 1956 and 1959 games ended in ties.

The Chancellor’s Spurs debuted in 1996 – the first-ever year of both the new Big 12 conference and Texas and Texas Tech each employing a university system chancellor. The Longhorns have worn the Spurs home 19 times vs. the Red Raiders’ six.

According to Fox Sports Southwest, “The tradition of the ‘Battle for the Iron Skillet’ began in 1946 to prevent vandalism by fans a year after more than $1,000 in damage had been done to both the TCU and SMU campuses. But why a piece of cookware? There’s a myth that it was sparked by an SMU fan who was frying frogs’ legs in a skillet at a tailgate. The tradition died over the years, but it was revived in 1993 with the introduction of a new Iron Skillet.” TCU has won 20 of the new frying pans vs. SMU’s six. The two schools have only missed playing each other four times (in 1986, 1987, 2016 and 2020) in the last 100 years (or since 1921) and are currently scheduled to meet thru 2024.

Though Texas A&M didn’t join former fellow Southwest Conference member Arkansas in the SEC until 2012, the Southwest Classic kicked-off in 2009 when the Aggies were still in the Big 12. The two shared membership in the old SWC for 76-years (1915-91). Apart from a home-and-home in 2012-13 and last season’s game in College Station the two have met in Arlington, Texas every year since 2009. The Aggies have won nine Classics vs. Arkansas’ three.

The Textile Bowl Trophy was first introduced in 1981, “part of a joint marketing effort by the textile commissions of both North Carolina and South Carolina…State and Clemson boast two of the largest, most respected textile schools in the country and have similar academic missions.” The Tigers have captured the weavers’ prize 29 times vs. the Wolfpack’s 10.

This Saturday all five FBS schools hailing from the state of Michigan will host teams whose campuses are located a minimum of three states away. Combined, the five opponents will travel 13,050 miles round-trip. If they made the journey via bus, it would take 100 total hours to get to the games and another 100 to get back home.

Not only are the three non-conference matchups listed never-seen-before, first-ever meetings, the SJSU at WMU and Texas State at EMU games mark the first-time ever that the Spartans and Bobcats have played a football game in the state of Michigan. Florida International visited the Wolverine State in 2010, edging Toledo in the Little Caesar’s Bowl in Detroit.

No mention of the USF @ BYU game…

No Mention of the Wyoming vs UConn game either

A little surprised that Colorado State and Iowa have never played.

@Jerry, IMO BYU = not being ignored. There are many more competitive Games to mention than a 0-2 (VS 1A Foes) Bulls Team who’s a 23 Point underdog on the betting Lines.

Wyoming VS UConn = mentioned under the Category of “First Ever Meetings”.