Breaking down Week 4 of the 2018 college football schedule 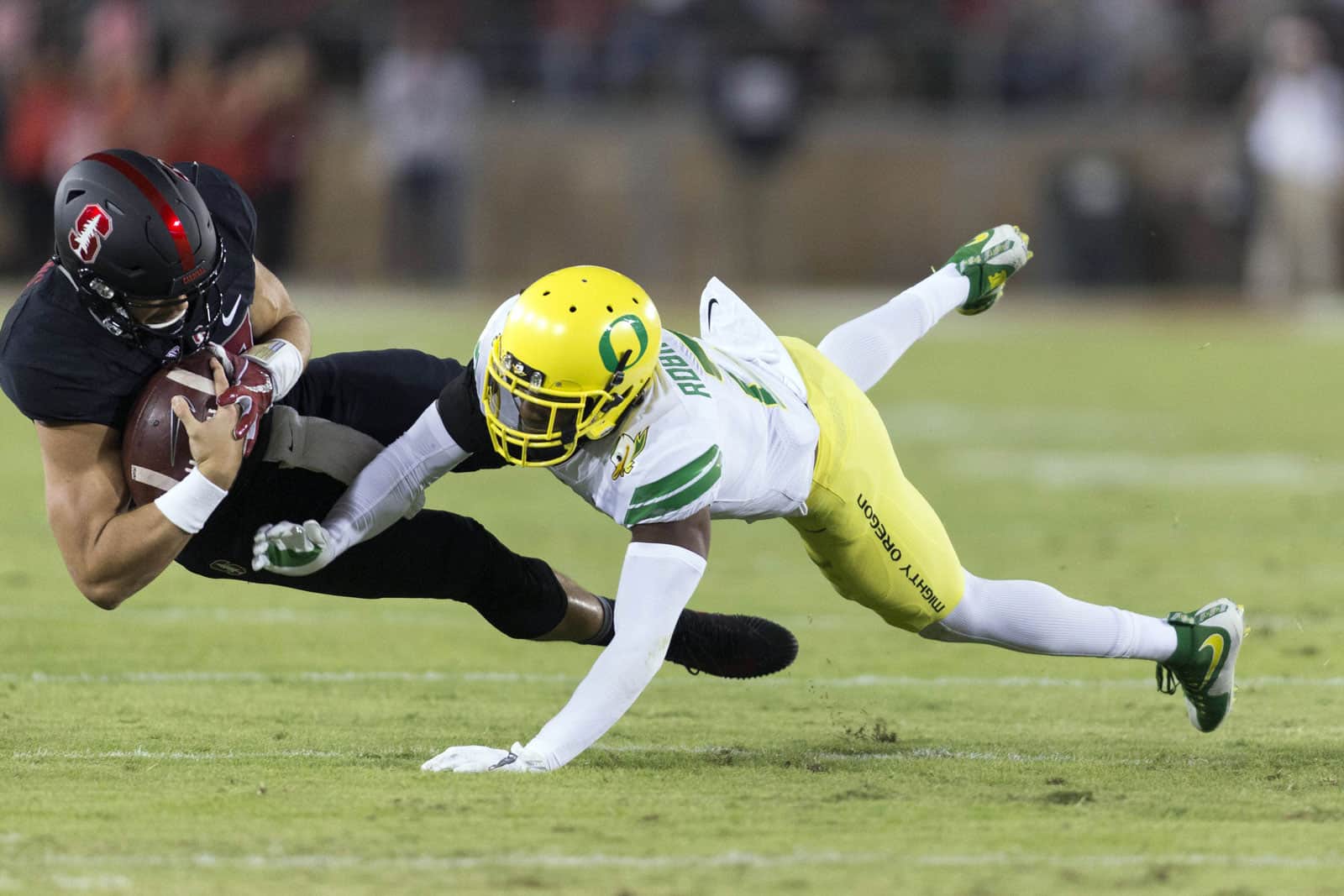 On tap for for the Week 4 college football schedule are 62 games – one on Thursday night, three on Friday and 58 on another jam-packed Saturday.

The good news is, FBS vs. FCS action plummets all the way to seven games – a far cry from the 42 contests in Week 1. This combined with the 13 programs enjoying a week off means that Week 3 offers the fewest total games thus far this season. But, what we’ve lost in quantity we’ve gained in quality.

Prior to the weekend, your best viewing options come late Friday night – (10) Penn State at Illinois at 9pm EST on FS1 and Washington State at USC at 10:30pm EST on ESPN.

Saturday gets started right with four compelling options all in the Noon EST time slot: (2) Georgia at Mizzou on ESPN, (8) Notre Dame at Wake Forest on ABC, Nebraska at (19) Michigan on FS1, and (23) Boston College at Purdue on ESPN2.

The jewel of the afternoon is (22) Texas A&M visiting (1) Alabama at 3:30pm EST on CBS. While there are several options to flip back-and-forth with during this one, keep an eye on (3) Clemson at Georgia Tech on ABC, K-State at (12) West Virginia on ESPN, and (17) TCU at Texas which starts an hour later on FOX.

In primetime, it’s all about (7) Stanford at (20) Oregon at 8pm EST on ABC, but don’t forget to switch over to (18) Wisconsin at Iowa, an 8:30pm EST start on FOX. Those who stay up late will be rewarded with what may be the best matchup of the weekend – Arizona State at (10) Washington at 10:30pm EST on ESPN.

In the way-under-the-radar category are two potential gems: North Texas at Liberty at 6pm EST on ESPN 3 (featuring the No. 3 and No. 11 QBs in college football) and Eastern Michigan at San Diego State (featuring a Top 15 passing attack taking on a struggling secondary AND the No. 4 rusher nationally vs. a bottom-tier defense) at 10:30pm EST on CBSSN.

9: South Carolina has won 9-straight over Vanderbilt (last loss in 2008)

Though (2) Georgia is a two-touchdown favorite over Missouri, statistically speaking this is a classic strength vs. strength matchup on two counts. First up, it’s the Bulldogs’ No. 14 nationally ranked rushing attack taking on a Tigers’ D ranked a lofty No. 8 – again that’s a national ranking – vs. the run. On the flip side, its Mizzou’s No. 4 ranked air attack squaring off with a Georgia secondary ranked No. 19 vs. the pass. Though we’re only three games into the season, both schools have earned a portion of their stripes against quality Power opponents – the Bulldogs in a 41-17 beatdown at South Carolina in Week 2 and the Tigers in a 40-37 dog fight with Purdue last Saturday. This one has all the elements to be an epic battle.

At 1-2, Arizona is off to its worst start since 2011, when it fired head coach Mike Stoops after going 1-5 in its first six games. Though there is lots of blame to pass around, the Wildcats’ defense – which returned nine starters from 2017 – is ranked No. 106 nationally in scoring and No. 114 vs. the run. Only seven teams in the FBS have given up more rushing TDs in the first three weeks of the season. While Oregon State – also 1-2 – might not look like a threat on the surface, it’s home to the No. 7 rusher in all of college football. Not only has freshman running back Jermar Jefferson (#24) averaged 130.33 yards per game thus far, his six rushing TDs tie him for the second most in the nation.

Wisconsin hasn’t lost back-to-back games since 2016 when it fell at (4) Michigan on Sept. 24 and then lost to (2) Ohio State the next week in Madison. It hasn’t suffered consecutive losses to unranked opponents since 2007 when it lost at Illinois on Oct. 6 and then fell at Penn State on Oct. 13. This Saturday’s game at Iowa sets up as a compelling matchup. On one side of the ball, it’s the Badgers’ No. 9 ranked ground game and on the other is an Iowa D that’s currently No. 2 – in the nation – vs. the run. (25) BYU limited Wisconsin to 204 rushing yards in its stunning Week 3 upset. It’s the fewest the Badgers have managed vs. a non-Power conference member since the 2016-17 Cotton Bowl, when they amassed a mere 184-rushing yards in a 24-16 win over (12) Western Michigan. Usher in Iowa’s D – which has allowed 126 total rushing yards in its first three games (101 to Northern Illinois, 19 to Iowa State and 6 to FCS Northern Iowa) – and things get interesting.

First awarded in 2009, the Gansz Trophy honors coach Frank Gansz, a highly regarded, longtime special teams coach in college and the NFL. Gansz played at Navy from 1957-59, was an assistant coach there from 1969-72 and then was the special teams coach at SMU from 2008 until he passed away in 2009. Navy has won the Gansz six times, SMU is yet to win the award.

The Heartland, a bronze bull, wasn’t introduced until 2004 when the two schools decided to honor their then 110-year old rivalry by offering a traveling prize. Why a bull? According to the Hawkeyes, it “symbolizes the kind of games that have been typical when the schools meet.” The Badgers have grabbed the bull by the horns seven times vs. Iowa’s five.

Awarded since 1950, legend has it that the Spittoon was originally purchased at a Lansing antique store by Michigan State grad Gene McDermott. Why did he buy it? Well, “in order to avoid a letdown in the game against Indiana just a week after knocking off rival Notre Dame.” Did it work? Absolutely – the Spartans blanked the Hoosiers 35-0 and took possession of the Spittoon first. MSU has won the Ole’ Spit Cup 47 times vs. Indiana’s 11, the 1977 game ended in a tie.

The winner of the “Battle of I-10” doubles up with two awards. The original Silver Spade – an old prospector’s shovel from an abandoned mine – dated back to 1947 and was upgraded to the current version in 1955. The Brass Spittoon – officially the Mayor’s Cup – debuted in 1982 when the mayors of El Paso and Las Cruces collaborated to present a second award to the rivalry. UTEP has won 44 Spades and 23 Spittoons vs. New Mexico State’s 24 shovels and 11 spit cups.

The last time Army played a program with more national championships than it was in 2016 when it got manhandled by unranked Notre Dame 44-6 in South Bend. The last time the Black Knights beat an FBS opponent with more titles was 47-years ago, in 1971, when they edged Pitt 17-14 at West Point. Prior to that it was a 14-2 triumph at (4) Notre Dame in 1958. That team went on to finish 8-0-1 and were ranked No. 3 in the final AP. It was also Earl “Red” Blaik’s final season as the head coach at Army.

The Black Knights get a chance to make history this Saturday night when they visit (5) Oklahoma. They haven’t beaten a ranked team since winning 17-14 over (19) Air Force in 1972 and haven’t downed a Top Ten opponent since edging (9) Penn State 10-7 in 1963.