Breaking down Week 4 of the 2017 college football schedule 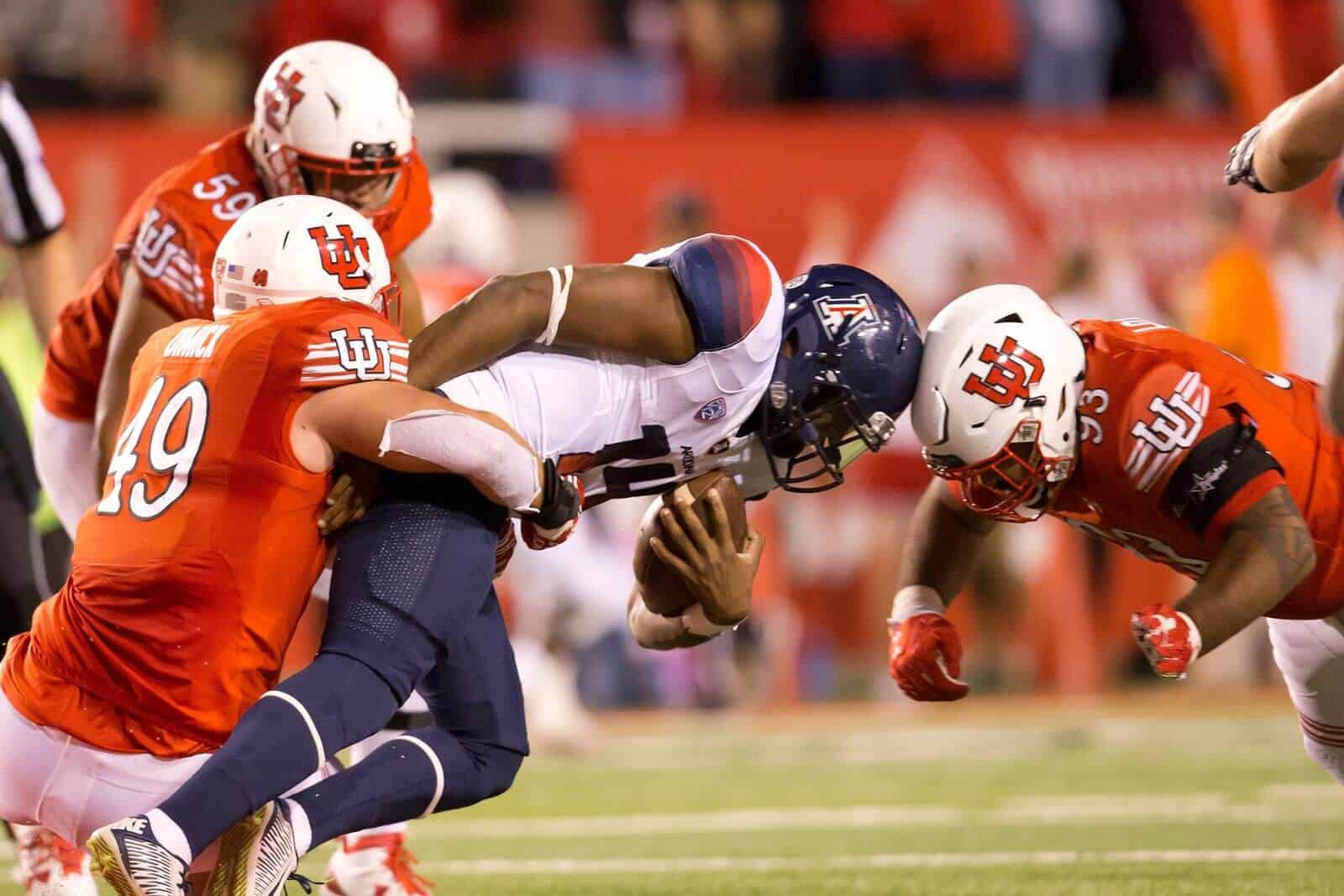 Week 4 of the 2017 college football schedule features 59 games – one on Thursday night, two on Friday, 55 on Saturday, and one on Sunday.

The unusual Sunday game—East Carolina at UConn—was originally slated for Nov. 4, but was moved to accommodate schedule changes due to Hurricane Irma. It can be seen at Noon EST on ESPNU.

FBS vs. FCS contests dwindle all the way down to just three this week – a far cry from the 46 in Week 1. It represents just five percent of the total games on offer.

Though there’s only one Ranked vs. Ranked game slated for Saturday night, don’t forget about (4) Penn State at Iowa (7:30PM EST on ABC) and Notre Dame at Michigan State (8pm EST on FOX).

This one ought to be a slug fest – Arizona’s No. 6 ranked rushing attack being tested by Utah’s rush D, the second-best unit in the FBS. The Utes have given up an average of only 49.33 ground yards in their first three outings – that vs. the Wildcats’ average of 328 rushing yards gained. Check out Utah senior linebacker Sunia Tauteoli (#10) who leads the team in tackles and tackles for a loss. On the other side of the ball, keep your eye on Arizona junior quarterback Brandon Dawkins (#13), his five rushing touchdowns tie him for the third most in the FBS.

This one may not look sexy on the surface, but it features the No. 8 passing attack in college football (Arkansas State) taking on the No. 117 ranked pass defense (SMU). The Mustangs coughed up 424 air yards to North Texas in Week 2 and then allowed another 365-last week vs. (16) TCU. The Red Wolves are led by junior quarterback Justice Hansen (#15), averaging 375.5 yards per game he’s the No. 6 QB in the FBS.

Another hidden gem, Ball State’s senior defensive lineman Anthony Winbush (#98) leads the entire nation in sacks, posting 6.5 in three games. It includes scoring three at Illinois in the opener, a narrow 24-21 loss. Usher in Western Kentucky, which has allowed a whopping 10 sacks in three games, tied for the fifth most in the FBS ranks. NFLDraftScout.com has Winbush at No. 32 among the 238 outside linebackers available for the 2018 NFL Draft.

Only six teams have given up more rushing yards than UCLA has this season, averaging 275 yards allowed per game. This sets up well for Stanford, despite it’s 1-2 start the Cardinal have the No. 2 rusher in the FBS, junior running back Bryce Love (#20) who’s averaging 174.67 yards per game. He’s also ranked No. 2 nationally in total yards (524) and No. 3 in yards per carry (12.19). The Bruins will have to batten down the hatches to rebound after last week’s loss to Memphis.

The Megaphone Trophy – Notre Dame at Michigan State – series started in 1897 – Notre Dame leads 46-29-1 and has won three of the last five.

The Irish and Spartans met consecutively from 1959-94 and 1997-2013. The Megaphone Trophy debuted in 1949, courtesy of the Detroit based alumni clubs of both schools. As advertised, the award is a megaphone, with a red stripe painted down the middle listing the years the two have met. Each team’s contribution to the score is painted on their side of the prize. Notre Dame has won the Megaphone 34 times vs. Michigan State’s 26. They aren’t scheduled to meet again until 2026/2027.

The O’Rourke-McFadden dates back to 2008 and is named in honor of the two All-American quarterbacks who played in the first-ever clash between the two schools in the 1940 Cotton Bowl. Clemson’s “Banks” McFadden led his Tigers to a 6-3 win over Boston College’s “Chuckin’” Charlie O’Rourke. The loss was the last-ever in O’Rourke’s collegiate career, the next season he led BC to an 11-0 record and a national championship, the only in school history. The Eagles have only won the trophy once, in 2010.

The Paniolo Trophy – Hawaii at Wyoming – series started in 1978 – Wyoming leads 13-9 and has won six of the last seven.

“Paniolo” is the Hawaiian word for cowboy. The Paniolo Trophy originated in 1979 with both schools were WAC members and was awarded consecutively until 1997. The original award went missing and was replaced in 2013 when the schools reunited as members of the Mountain West. The newer version features Hawaiian cowboy Ikua Purdy roping a bull. Purdy, who won for steer-roping at the Frontier Days Rodeo in 1908, became the first Hawaiian to be inducted into the National Rodeo Cowboy Hall of Fame in 1999.

The winner of the “Battle of I-10” doubles up with two awards. The original Silver Spade – an old prospector’s shovel from an abandoned mine – dated back to 1947 and was upgraded to the current version in 1955. The Brass Spittoon – officially the Mayor’s Cup – debuted in 1982 when the mayors of El Paso and Las Cruces collaborated to present a second award to the rivalry. UTEP has won 44 Spades and 22 Spittoons vs. New Mexico State’s 23 shovels and 10 spit cups.

Though Texas A&M didn’t join former fellow Southwest Conference member Arkansas in the SEC until 2012, the Southwest Classic kicked-off in 2009, when the Aggies were still in the Big 12. Except for a home-and-home in 2012-13, the two have met in Arlington, Texas every year since 2009. The Aggies have won five Classics vs. Arkansas’ three.

One of seven bells awarded in FBS rivalries, the Victory Bell has been a part of the North Carolina-Duke series since 1948. Established by a cheerleader from each school to “foster friendly relations and eliminate vandalism between the two neighboring schools” the Tar Heels have won the Bell 45 times vs. the Blue Devils’ 23.

Miami (Ohio) at Central Michigan – rematch of the 2007 MAC Championship – CMU defeated Miami 35-10 in Detroit. The all-time series is tied 13-13-1. Like UCLA/Stanford, the title game is the only time in history the two played in the postseason.

These message boards seem to have gotten a lot quieter. I wonder if it is because SEC nation has finally realized their conference has fallen off a cliff (outside of Alabama).

Targeting penalty in your picture??