Breaking down Week 3 of the 2021 college football schedule 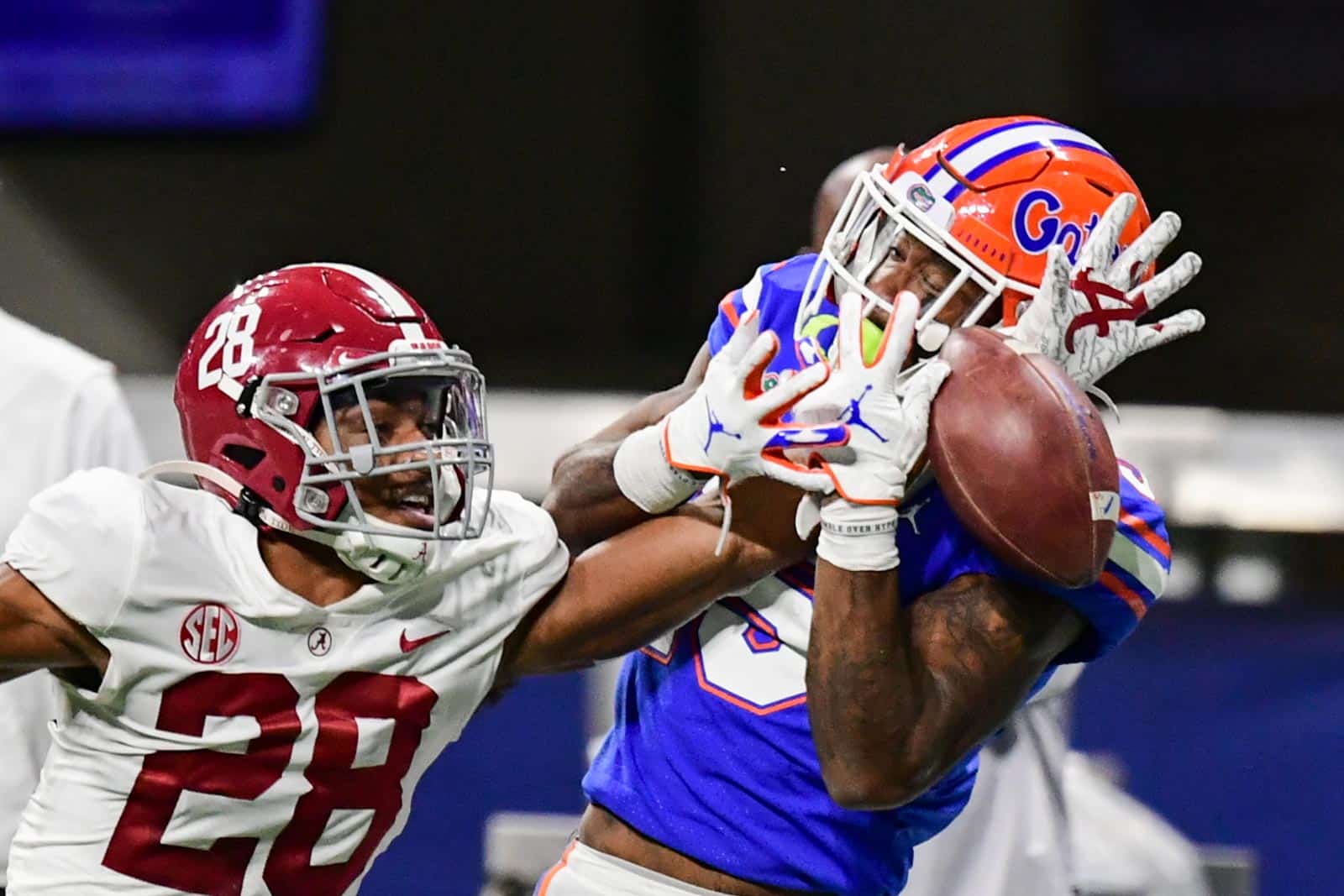 It only took 14 days for half of the preseason Top 4 teams to fall in 2021. The seismic shift could continue this Saturday with the No. 1 thru No. 3 squads all playing Power 5 foes including top dog (1) Alabama’s roadie at (11) Florida.

From start to finish, Week 3 serves up 73 matchups, all but 21 (or 29%) featuring an FBS vs. FBS pairing. Though the action kicks-off on Thursday night, no ranked teams will hit the field until a Saturday jam-packed with 70 contests. If you’re wondering what the most fruitful time slot might be, all three of this week’s ranked vs. ranked matchups kickoff between 3:30 and 10:15pm ET.

After losing to (1) Alabama in Week 1 and squeezing by with a two-point win over App State last Saturday, the Hurricanes are only favored by 6.5-points vs. the Spartans. Keep an eye on Michigan State junior WR Jayden Reed (#1) (No. 11 in the FBS in yards per catch) and junior RB Kenneth Walker III (#9) (No. 4 in the FBS in rushing yards per game).

Colorado has held opponents to an average of 59 rushing yards in two games (No. 14 in the nation) including limiting (7) Texas A&M to 98 in a three-point loss last Saturday. It makes for a strength vs. strength matchup vs. Minnesota, which hung up 203 rushing yards and three scores on (9) Ohio State in Week 1. Check out sophomore Golden Gopher RB Trey Potts (#3), fresh off a 178-yard, two score performance vs. Miami Ohio last week.

Notre Dame (which returned a mere nine starters in 2021 – the third fewest in the nation) has struggled to get to 2-0 – edging Florida State 41-38 in the opener and surviving 32-29 vs. Toledo last Saturday. This week the Irish are 7.5-point favorites vs. a Purdue team that’s ranked No. 10 – in America – in pass offense. The Boilermakers threw up 313 yards in their opening win against Oregon State and then torched UConn with 375 air yards and six passing TDs last Saturday.

Northwestern coughed up 326 rushing yards and four scores in its opening loss to Michigan State and this week will face a Duke ground attack headlined by senior RB Mataeo Durant (#21) who opened 2021 with a 255-yard, three score performance at Charlotte.

The Tigers have been on easy street thus far this season, scoring 60-plus in wins over Akron and FCS Alabama State. They’ve also already racked up 680 rushing yards – the third most in the nation. Look for the “for realness” of Auburn’s ground game to be severely tested vs. a (10) Penn State D that held mighty run-centric (18) Wisconsin to 180 ground yards in the opener and Ball State to only 69 last week.

Though there’s been lots of hype about (21) North Carolina junior QB Sam Howell (#7), don’t sleep on Virginia junior QB Brennan Armstrong (#5), averaging 372 passing yards through two games, the third most in the FBS. It lines up for an intriguing strength vs. strength matchup against a Tar Heel D that’s allowed a total of 259 air yards this year. Their 129.5-yard average is the eleventh best nationally.

All that’s standing between the Bruins and their first 3-0 start since 2015 is Fresno State, which hasn’t beaten a Power 5 member that was ranked in the Top 25 at game time since 2004. There is no reason to worry, right? Well, the Bulldogs are currently ranked No. 5 in passing offense (averaging 385 yards per game), a number than includes hanging up 298 air yards on (4) Oregon in a narrow 31-24 loss in Week 1. It’s a strength that pairs well with UCLA’s biggest weakness – a pass defense that finished last year ranked No. 114 and is currently No. 115 this year. The Bruins gave up a whopping 330 air yards in the seven-point win over LSU (which earned just 180 passing yards last week vs. FCS McNeese State). Could this be an upset in the making?

No FBS program has allowed more passing yards this season than has Louisiana Tech. While the Bulldogs get a pass for coughing up 370 air yards in a valiant effort vs. Mississippi State in Week 1, the 506 passing yards they gave up to FCS Southeastern Louisiana last Saturday sounds the alarm bells. Cue up SMU – averaging 315 passing yards per game (No. 18 nationally) – and a potential weakness could be exposed in a big way on Saturday. Keep an eye out for SMU junior QB Tanner Mordecai (#8) – not only is he currently No. 12 in yards per game, he’s also No. 3 in the FBS in passer rating.

After two games, Baylor is quietly ranked No. 5 – in the nation – in rushing offense. Though it didn’t get there by playing a pair of powerhouses the numbers don’t lie – 244 ground yards and two rushing TDs vs. Texas State in Week 1 and then 419 rushing yards and five scores against FCS Texas Southern last Saturday. This week, it’s a visit to Kansas – which finished 2020 ranked No. 118 in the nation vs. the run and is currently at No. 99. The Jayhawks allowed 200-plus rushing yards in seven of their nine appearances last year and gave up 215 yards and four rushing TDs to (16) Coastal Carolina last week. Check out Baylor senior RBs Trestan Ebner (#1) and Abram Smith (#7), both have posted 100-plus yard performances in each of their two outings this year.

In what could be Week 3’s most entertaining matchup, tune in to this one to watch two high-powered air attacks take on two defenses that have struggled to stop the pass. In one corner, it’s Mississippi State – averaging 332 air yards (No. 16 in the FBS) – and in the other it’s a Memphis D that coughed up 582 passing yards and five TDs in a shootout win vs. Arkansas State last week. Flip the script and it’s the Tigers’ passing game – averaging 341 yards per game (No. 12 in the FBS) – squaring off with a Bulldog’ defense that finished last season ranked No. 105 vs. the pass and has dropped to No. 114 nationally thus far this year. Yard fest players to watch include Memphis’ freshman QB Seth Henigan (#14) and senior WR Calvin Austin III (#4) along with MSU’s sophomore QB Will Rogers (#2).

Though the series dates back 100-years, the Black Diamond Trophy  (which honors the “region’s history with the coal industry”) didn’t become a part of the rivalry until 1997. Virginia Tech and West Virginia shared conference membership twice; in the Southern Conference from 1950-64 (meeting ten times) and the Big East from 1991-2003 (meeting 13 times consecutively). The Hokies have taken home the Black Diamond seven times vs. the Mountaineers’ three. They are scheduled to meet again next season, this time in Blacksburg.

Not to be confused with the Jeweled Shillelagh (presented to the winner of Notre Dame-USC), the Shillelagh Trophy is a blackthorn oak club “donated by merchant seaman and Fighting Irish fan Joe McLaughlin” who purchased it during a trip to Ireland. First introduced in 1957, the winner and score of each game is recorded on medallions affixed to the oak stand that holds the Shillelagh. The Irish and Boilermakers battled for the traveling prize every year from its debut until 2014, when Notre Dame kind-of, sort-of – but not really – joined the ACC. Notre Dame has won the Shillelagh 39 times vs. Purdue’s 19. The two currently have plans to meet again from 2024-28.

While we’re on the subject of celebratory Irish sticks, there was also a Shillelagh associated with the Notre Dame-Northwestern rivalry but it’s now the property of an Omaha, Nebraska businessman.

According to U.S. News & World Report’s 2021 Best National University Rankings the top four academic institutions in the FBS ranks are as follows:

What are the chances that the four smartest programs in the FBS – representing four separate conferences – are playing each other in 2021? Well, friend, what if I told you that not only are they pairing up on the gridiron this season – they’re doing it all in Week 3?

Utilizing each schools’ academic rank in the FBS, this Saturday it’s (2) Northwestern at (3) Duke at 4pm ET on the ACC Network and later that night it’s (1) Stanford at (4) Vanderbilt at 8pm ET on ESPNU.

Unbelievably, it looks just like the College Football Playoff bracket – only in this case it’s the Semi-Finals of the Brain Bowl. Who wouldn’t want to see the SAT scores of the participants in the Championship game?

And what about poor Rice (ranked No. 16 overall or No. 5 in the FBS academically) who got left out of the bracket when the Brain Bowl committee ranked the teams. It reminds me a lot of 2014, when two other Texas programs – Baylor and TCU (who were both 11-1 at the end of the regular season) – were relegated to the No. 4 and 5 spots in the CFP bracket respectively and similarly missed a chance to play for a national title.

Western Michigan has NEVER played Pitt? That absolutely astounds me what with the proximity and the Panthers prior independence. It’s not like the Broncos are a new school to FBS or 1-A either

Dan-ke for the research which makes these Games a little more interesting than the standard shallow (booooooring) previews which are carbon copy like year after year- infinity.