Breaking down Week 2 of the 2022 college football schedule 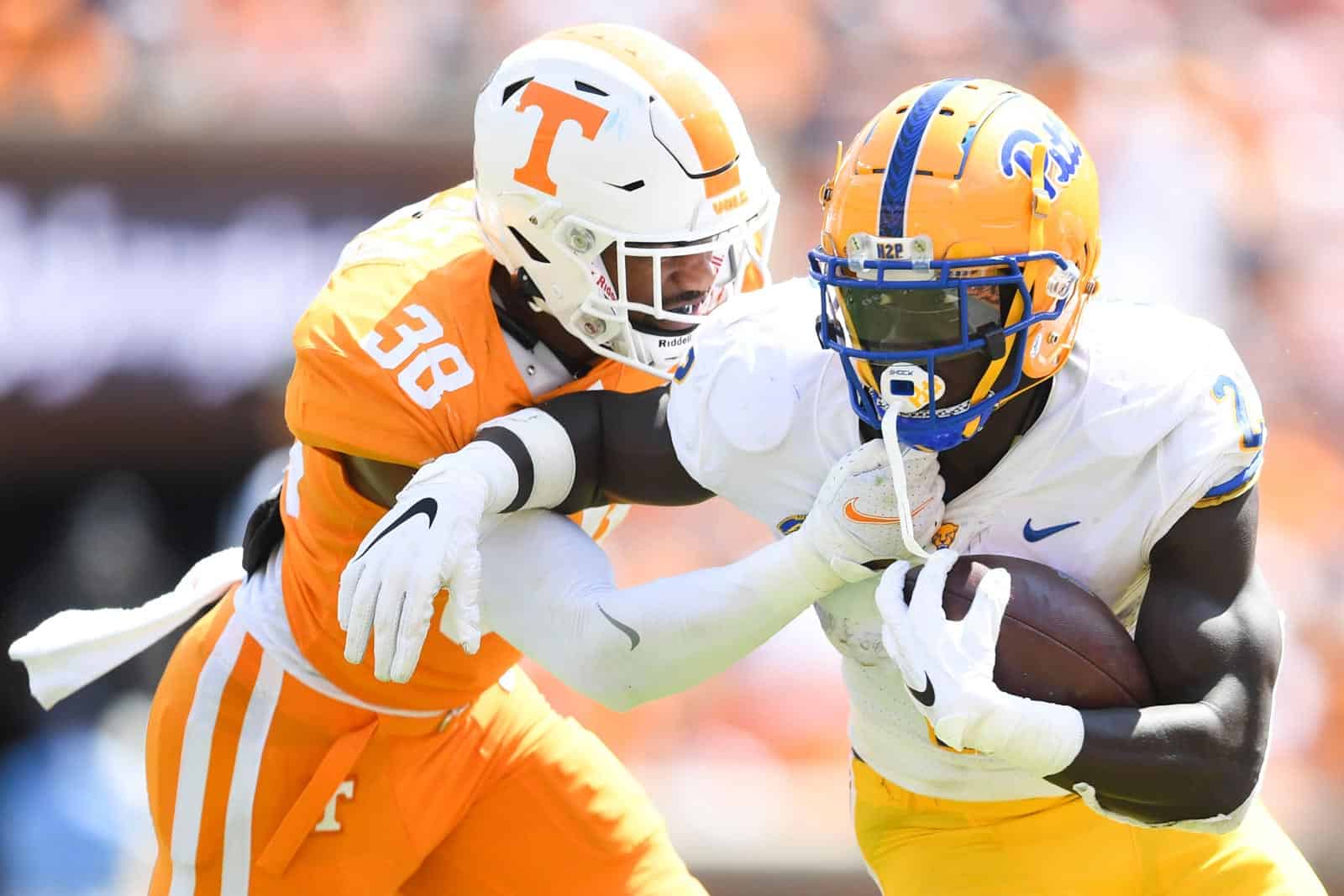 Week 2 of the 2022 edition of the college football schedule is, like its predecessor last week, another case of an overabundance of goodness.

Down just one contest from Week 1, on tap are 82 total games, 35 of which (or 42 percent of the field) are between an FBS school and an FCS opponent. Of the 47 pairings that remain a precious 15 feature a Power 5 club taking on another Power 5 member.

With only three members of the latest AP Top Ten taking on a Power grade foe, and only one facing a ranked opponent, what we’re less likely to see this week is a dramatic upset. But that doesn’t mean it won’t happen.

(1) Due to the kickoff of the NFL season, there are NO games scheduled for Thursday night.

These two powerhouses are predicted to have top-ranked rushing attacks in 2022. Phil Steele has the Longhorns as his No. 1 rated rushing unit with the Crimson Tide just a few slots behind at No. 5. Where Texas scored three of its six offensive TDs on the ground in its Week 1 win over ULM, the Alabamians racked up 278 ground yards in their decisive victory vs. Utah State. The gap between the two, and perhaps the difference in the matchup, comes defensively. The Crimson Tide return seven starters to a unit that finished last year ranked No. 4 in the FBS vs. the run while the Longhorns return seven to a squad that finished ranked No. 114.

Look for the high-powered Buckeyes to continue their winning ways vs. Arkansas State, a team that returned a mere five starters to a defense that finished last season ranked No. 95 in the FBS vs. the pass and No. 130 – or dead last – against the run. While OSU’s 395 yard and 21-point performance vs. Notre Dame last week wasn’t the offensive explosion some Buckeye fans were hoping for, the Irish returned eight starters this season to a defense that finished 2021 ranked No. 14 in the nation in scoring. Where Notre Dame gave up an average of 19.7 points per game last year, the Red Wolves allowed 38.6. Brace yourself for the Heisman talk about OSU junior QB C.J. Stroud (#7) – who is currently the No. 2 guy in Vegas’ eyes – to get loud.

The Commodores return six starters to a defense that wrapped up 2021 ranked No. 114 in the FBS vs. the pass. It’s the same unit that coughed up 343 passing yards and two scores to FCS Elon in Week 1. Cue up the Demon Deacon’s offense, which returns seven starters to the No. 12 passing attack from last season, and you get the picture. As a bonus, Wake Forest junior QB Sam Hartman (#10) – the No. 11 passer in the FBS last season – is back in action this week after missing the opener due to a blood clot. Standing in for Hartman in Week 1 was freshman QB Mitch Griffis (#12) who went 21-of-29 for 288 yards, three TDs and zero INTs vs. FCS VMI.

On the other side of the ball, look out for Vanderbilt junior QB Mike Wright (#5) – the team’s No. 2 rusher in 2021 – who rushed for 163 yards and two scores vs. Hawaii in Week Zero and then rushed for 83 yards and two more TDs last Saturday vs. FCS Elon. Did you know that despite Wake Forest’s historic 11-3 finish last year that it was ranked No. 111 nationally vs. the run?

These two old rivals haven’t clashed since 2011, Missouri’s final season in the Big 12 before fleeing to the SEC. Prior to that, they had met consecutively since 1927. The reunion should be a huge test for Missouri’s defense which despite improving over the course of last season finished No. 124 nationally/dead last in the SEC vs. the run. Kansas State returns master yardist junior RB Deuce Vaughn (#22) who not only finished No. 8 in the FBS in total rushing yards (1,404) but was tied for No. 8 in rushing TDs (18). But wait! There’s more! Vaughn also caught 49 passes for an additional 468 yards and four scores.

Marshall’s move from C-USA to the Sun Belt this season makes it the first-ever current Sun Belt member that Notre Dame has met on the gridiron. The Thundering Herd last upset a ranked opponent in 2020, downing then (22) App State 17-7. It hasn’t won over a Top Ten foe since 2003 when it edged then (6) Kansas State 27-20 in Manhattan.

Despite achieving a stunning 11-3 record last year and winning the ACC, Pitt finished the season ranked No. 114 in the FBS vs. the pass. The good news is that the Panthers returned seven defensive starters and held West Virginia to 214 passing yards and two scores in Week 1’s narrow win. But the Mountaineers aren’t the same pass-happy squad from the Dana Holgorsen era, instead finishing 2021 ranked No. 55 nationally in pass offense. It makes this week’s clash with Tennessee, who Phil Steele has as the No. 9 ranked QB room in the FBS, an intriguing matchup. Senior Volunteer QBs Hendon Hooker (#5) and his backup Joe Milton III (#7) combined for 351 passing yards and three TDs in last Thursday night’s blowout win over Ball State.

Given its triple option attack it’s no surprise that Air Force (which finished 2021 as the No. 1 rushing offense in America) is expected to be ranked among the top rushing units in the nation again this year. But with its top six backs returning along with four starters on the O-line, 2022 could be special. Cue up Colorado, which returns just five starters to a unit that finished last season ranked No. 96 in the nation vs. the run and this has all the right stuff to be Air Force’s fourth straight win over a Power club. Where the Falcons hung up a mind-blowing 582 rushing yards and five TDs on FCS Northern Iowa last week the Buffs allowed 275 rushing yards and four TDs in their loss to TCU. Keep an eye on Air Force senior FB Brad Roberts (#20), the No. 14 back in the nation in total rushing yards last season (1,357).

After two outings Illinois junior RB Chase Brown (#2) is the No. 1 back in the FBS averaging 179 yards per game. He opened with a 151-yard, two score performance in the Week Zero win over Wyoming and then cranked out 201 yards in last Saturday’s narrow loss at Indiana. Enter stage left the Cavaliers, who return six starters to a defense that finished last season ranked No. 123 in the FBS and dead last in the ACC vs. the run and things could get interesting.

This under-the-radar selection features two up-and-coming rushers. In one corner it’s the No. 4 back in the nation from last season – Syracuse sophomore RB Sean Tucker (#34) – and in the other it’s UConn sophomore RB Nathan Carter (#26) who after two games is the No. 3 back in the land. Can either be stopped? The Orange return eight starters to a defense that finished 2021 ranked No. 26 in the nation vs. the run and held Louisville to 137 ground yards in last week’s win. As for the Huskies, they also return eight defensive starters but to a unit that was No. 108 nationally vs. the run last year and which coughed up 261 ground yards to Utah State in Week Zero.

While this one might look like a blockbuster cross-divisional Pac-12 matchup, don’t forget that Stanford is 11-19 since 2019 including skidding to a 3–9-mark last year. The good news is, the Cardinal return 17 starters in 2022, the bad news is only seven come back on a defense that was a very un-Stanford like No. 127 in the FBS vs. the run. Only three teams allowed more rushing yards. Hold the phone! Isn’t USC supposed to be a passing team? Well, for 2022 the Trojans (who finished 2021 ranked No. 82 nationally in rush offense) added both Oregon’s top rusher from last season (senior Travis Dye #26) and – ironically – Stanford’s No. 2 back (senior Austin Jones #6). Holy transfer portal!

A glimpse into the future of the new Big 12, this battle features BYU senior RB Christopher Brooks (#2), a transfer from Cal, who hung up 135 rushing yards and one score in the Week 1 rout of USF vs. Baylor’s defensive line, which Phil Steele has rated as his No. 4 D-line overall and the No. 1 unit in the Big 12. Don’t skip this one just because it comes on late!

Arizona’s 1-11 record last season understandably diminishes any successes, including that its defense finished ranked No. 14 in the FBS/No. 2 in the Pac-12 vs. the pass. With eight starters back this year, it’s a matchup made in heaven vs. Mississippi State, the No. 4 nationally ranked air attack from 2021 which returned eight offensive starters including junior QB Will Rogers (#2) and three of his top four receivers. Where the Wildcats held San Diego State to a total of 62 passing yards in a Week 1 win, the Bulldogs hung up 450 air yards and five scores in its beatdown of Memphis. This is a solid strength vs. strength matchup.

Bonus: On the other side of the ball check out Arizona junior WR Jacob Cowing (#2) who caught eight passes for 152 yards and three scores in last week’s win over San Diego State.

The winner of the “Battle of I-10” doubles up with two awards. First up, it’s the Silver Spade – the inaugural version, introduced in 1947, was an old prospector’s shovel from an abandoned mine. It was upgraded to its current state in 1955. The Brass Spittoon – officially the Mayor’s Cup – debuted in 1982 when the mayors of El Paso and Las Cruces – located a mere 42 miles apart – collaborated to present a second award to the rivalry. UTEP has won 45 Spades and 24 Spittoons vs. New Mexico State’s 26 shovels and 13 spit cups.

Of the 131 institutions represented by an FBS program only 14 are ranked among the Top 30 in U.S. News & World Report’s Best National Universities for 2022. In a twist of fate, six of these elite centers of academia will square off on the gridiron this Saturday. Each is an opportunity to watch some of the highest achieving students in the nation playing at the highest level of college football.