Breaking down Week 2 of the 2017 college football schedule 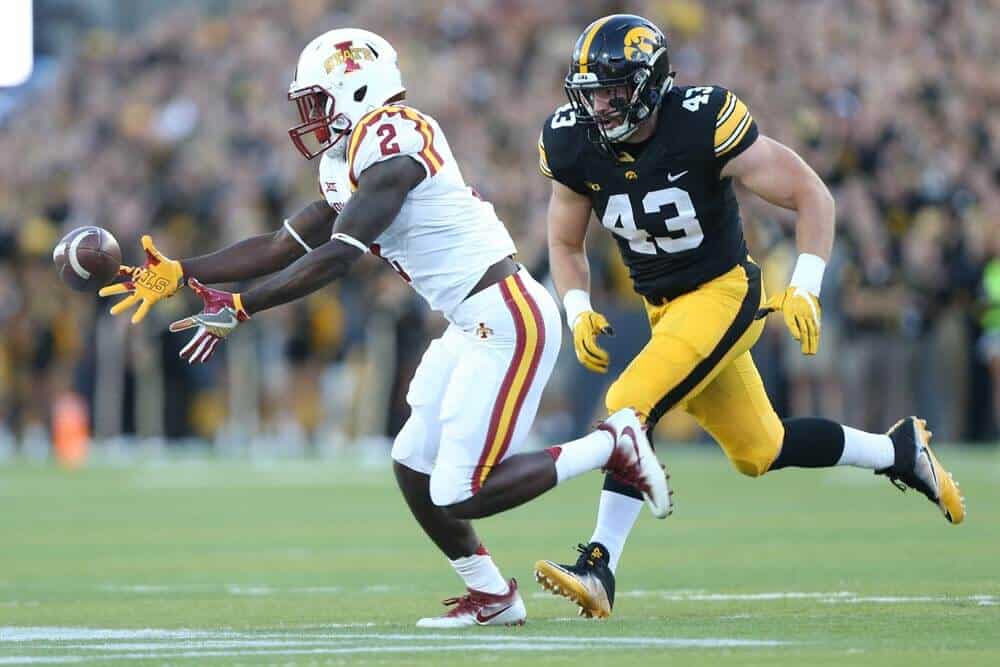 Week 2’s college football schedule is all about Saturday night, eight top-ranked teams clashing in four games that kickoff within an hour and a half of each other.

Overall, there are 75 games on tap, down 12 from the 87 we enjoyed in Week 1. FBS vs. FCS contests are slashed from 46 to 26, constituting 34% of the total. Seven include an SEC team, meaning that half of that conference’s Week 2 action is vs. an FCS opponent.

With the NFL kicking off, there’s only one college game on Thursday night, three on Friday and then a full slate of 71 on Saturday.

Check out this week’s statistical “Perfect Storms” – Week 2 could go down in history as the Week of the Running Back.

The stars align in Week 2 for the ground game – six rushing defenses that struggled epically in 2016 taking on six rush offenses that were wildly successful. Each presents an opportunity for a fortunate back to have a career day.

2016’s No. 13 rushing attack (Louisville) vs. the No. 108 ranked rush defense (North Carolina). Who to watch: Louisville junior quarterback Lamar Jackson (#8), the No. 1 rushing quarterback in college football last season. Rushed for 107 yards on 21 carries in the 35-28 Week 1 win over Purdue.

2016’s No. 12 rushing offense (Alabama) vs. the No. 123 ranked rush defense (Fresno State). Who to watch: Alabama junior running back Damien Harris (#34), the team’s top rusher last season, scored the Tide’s only rushing TD vs. Florida State in Week 1. The Seminoles finished 2016 ranked No. 21 vs. the run, 102 slots better than Fresno State.

2016’s No. 17 rushing offense (Texas) vs. the No. 122 ranked rush defense (San Jose State). The Spartans coughed up 315 yards to USF in their 42-22 loss last week. Who to watch: Texas junior running back Chris Warren III (#25), despite rushing for only 31 yards in Week 1’s loss to Maryland this big guy has breakout potential, especially if he gets more than the six carries he had in the opener.

After meeting 24 times between 1894-1934, the Hawkeyes and Cyclones took a 43-year break, finally reuniting in 1977. The original version of the Cy-Hawk trophy was first awarded in 1978, was revamped to not-so glowing reviews in 2011 and then finally debuted in its current form in 2012. Iowa has won the trophy 25 times vs. Iowa State’s 14.

The BYU/Utah rivalry is known as the “Holy War.” Though there is no traditional physical award for that game, the Beehive Boot is the prize given to the annual winner three-way rivalry between BYU, Utah, and Utah State. The Boot itself, first awarded in 1971, is a 100-year old pioneer boot sourced from where else, the Beehive State (the state’s nickname was chosen because it’s the symbol of hard work and industry). BYU has won 22 boots vs. Utah’s 15 and Utah State’s 9. The Utes have won two straight and three of the last four. The Cougars haven’t worn the boot since 2009.

BYU plays Utah State on Friday, Sept. 29 in Logan. Given that Utah and Utah State aren’t slated to meet in 2017, that game will determine the winner of the Boot.

Florida Atlantic’s road trip to (9) Wisconsin this Saturday not only marks the first time in history the two programs have met on the gridiron, it’s Lane Kiffin’s first head coaching appearance vs. a Power 5 team in 1,442 days.

Kiffin, now in his first season at FAU, last led a team vs. a Power opponent on Sept. 28, 2013, when he and USC traveled to Arizona State and got pounded 61-14. He was fired the next day.