Breaking down Week 15 of the 2020 college football schedule 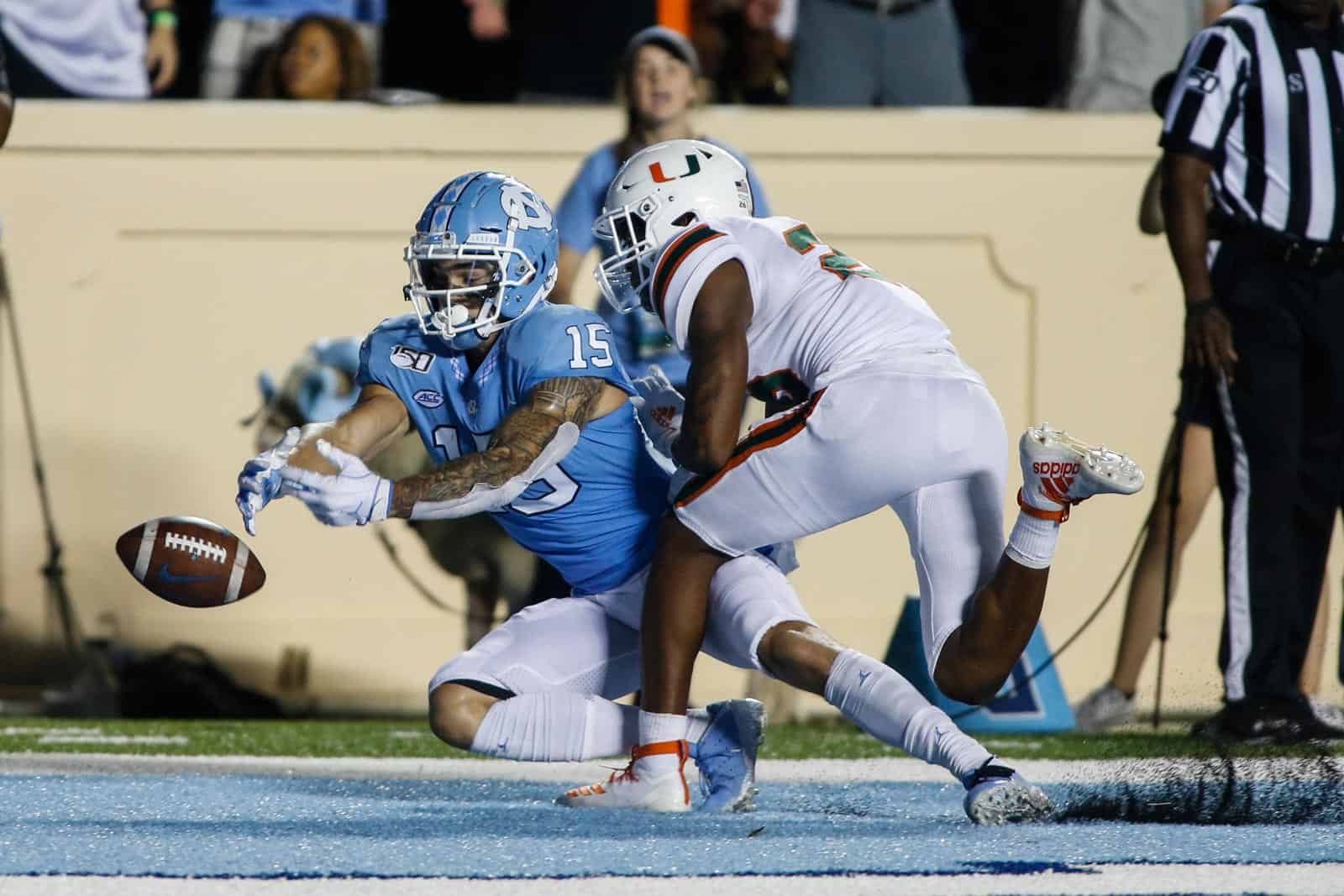 With six members of the Top Ten out of action, including three of the top four teams, Week 15 is unlikely to have an impact on the CFP picture. What it does offer is a handful of rivalry games along with a long list of teams wrapping up their 2020 campaigns.

Though Friday night is home to the Territorial Cup (Arizona State at Arizona, 7pm EST, ESPN) don’t forget to flip over to San Jose State at Nevada (10pm EST, CBSSN), which ought to be a close one.

Saturday’s Noon EST time slot is anchored by (1) Alabama (the only member of the Top 4 in action this week) at Arkansas on ESPN and (9) Georgia at (25) Missouri on the SEC Network. For something less obvious, dial up Wake Forest at Louisville on the ACC Network in what might be one of the most underrated matchups of the weekend.

If you’re up late check out San Diego State at (18) BYU (10pm EST, ESPN2) – while talk of the Cougars has quieted after last week’s loss, this matchup features BYU’s No. 12 ranked passing attack taking on SDSU’s No. 5 ranked pass D. Also worth watching is Stanford at Oregon State which kicks off at 10:30pm EST on ESPNU.

9: Nevada has won 9-straight home games over San Jose State (only loss there in 2000)

9: Northern Illinois has won 9-straight games AT Eastern Michigan (last loss there in 2000)

10: Virginia Tech has won 10-straight home games over Virginia (last loss there in 1998)

Tune in to this one to watch Buffalo junior RB Jaret Patterson (#26) – the No. 1 rusher in the nation – take on an Akron D ranked No. 107 (out of the 127 FBS teams participating this season) vs. the run. Patterson’s last two outings were out of this world – on Nov. 17 he hung up 301 rushing yards and four scores on Bowling Green and then on Nov. 28 he rushed for 409 yards and eight TDs vs. Kent State. After only four games, he’s amassed 920 rushing yards and 16 scores, tying him for the third most rushing TDs in the FBS. The only difference is, the other backs at the top of the scoring charts have all played in nine-plus games in 2020.

Toledo has quietly earned a No. 8 rank – nationally – in pass offense this season, averaging 338 air yards per game, just behind (3) Clemson’s 346. It sets up ever so well vs. a Central Michigan D ranked No. 121 in the FBS in pass D. Where the Rockets hung up 407 and 432 passing yards on its last two opponents, the Chippewas coughed up 366 and 365 air yards in their last two outings. Keep an eye on Toledo sophomore QB Carter Bradley (#2), who stepped up admirably in relief of injured starter senior Eli Peters (#12) last week.

After giving up 385 passing yards and four scores to (1) Alabama in Week 14, this week LSU squares off with Florida. That’ll be easier, right? Well, friends, where the Tide are ranked No. 4 in the FBS in passing yards per game, the Gators are No. 1. Throw in the fact that only two teams – in the entire nation – have allowed more air yards in 2020 than the Tigers and BAM…this might be the most perfect, Perfect Storm of the season. Keep an eye on Vegas’ No. 1 Heisman candidate, Florida senior QB Kyle Trask (#11), not only is he No. 1 in the FBS in TD passes, he’s also No. 2 in passing yards per game and No. 5 in passer rating.

The $5 Bits of Broken Chair Trophy – Minnesota at Nebraska – series started in 1900 – Minnesota leads 33-25-2 but the two have split the last four, the home team winning on each occasion.

The three-way contest between Army, Navy and Air Force, the Commander in Chief was established in 1972 to ensure that the newer Air Force Academy (which kicked off football in 1957) would play Navy and Army (both dating back to 1891) annually. The Falcons lead the way with 20 trophies, followed by the Midshipmen with 16 and the Black Knights with eight.

Air Force downed Navy 40-7 on Oct. 3 and was originally scheduled to play Army on Nov. 7. The postponement of that contest – until Saturday, Dec. 19 – means the 2020 Commander in Chief won’t be decided until after Army/Navy. If the Black Knights can beat the Midshipmen this weekend and then win over the Falcons next Saturday, they’ll capture the cup for the first time since 2018.

Established in 1996, the Commonwealth Cup is a whopper – four feet high and weighing in at 100 pounds. It’s big enough for the scores of every previous game between the two programs to be listed on its base. Virginia Tech has won 20 Cups vs. Virginia’s four. The game is also part of a 22-sport competition between the two schools called the “Commonwealth Clash”.

The Heartland, a bronze bull, wasn’t introduced until 2004 when the two schools decided to honor their then 110-year-old rivalry by offering a traveling prize. Why a bull? According to the Hawkeyes, it “symbolizes the kind of games that have been typical when the schools meet.” The Badgers have grabbed the bull by the horns nine times vs. Iowa’s five.

The Land Grant dates to 1993, when Penn State joined the Big Ten and renewed its series with Michigan State, who it hadn’t played since 1966. The name honors the fact that both schools (founded just 10 days apart in 1855) were “pioneer land-grant schools in the nation.” The trophy features landmarks from each campus as well as the team’s mascots. Penn State has won 15 Land Grants vs. Michigan State’s nine.

First introduced in 2009, the Land of Lincoln, which depicts Abraham Lincoln’s iconic hat, was the result of an online contest conducted with both schools’ fanbases. The two teams played for the Sweet Sioux Tomahawk from 1945 to 2008 but it was retired “out of respect for Native American Nations.” Northwestern has won eight of the new awards vs. Illinois’ three.

The self-proclaimed “oldest trophy for a rivalry game in America” the Territorial Cup is unique because not only has it been in use for the entirety of the series it’s also over 100 years old. The name refers to the fact that the Cup was awarded before Arizona was even a state, remaining a territory until 1912.

One of nine bells awarded in FBS rivalries, USC-UCLA’s Victory Bell dates back to 1939 when the UCLA Alumni Association gave the bell, a massive 295-pounder off a locomotive, to its alma mater. The Bruins rang the bell after each football score for two seasons until 1941, when members of a USC fraternity disguised as UCLA fans, stole the bell during the season opener.

After a series of shenanigans, the two schools signed an agreement before the 1942 game to award the bell to the winner of the cross-town rivalry. The recipient earns the privilege of painting the bell’s carriage its school colors, which the Trojans have done 45 times vs. the Bruins’ 32. Four games (1944, 1958, 1971 and 1989) ended in ties.

Among the full slate of contests this Saturday is the 121st playing of the Army/Navy game. While we’ve become accustomed to seeing the historic rivalry as the only FBS matchup on offer the week after the regular season wraps up, that was a practice that didn’t begin until as recently as 2009.

What is a “first time in forever” element of 2020’s edition of Army/Navy is the fact it’s being played at West Point as opposed to Philadelphia where it was originally booked. It marks the first time since World War II that the game will be played at a home site. The last meeting at West Point was 77-years ago (in 1943) while the last clash in Annapolis came the season before in 1942.

The San Jose – Nevada game was originally supposed to be in San Jose, but was moved to neutral Las Vegas. So it shouldn’t be qualified as a home game for Nevada.