Breaking down Week 14 of the 2020 college football schedule 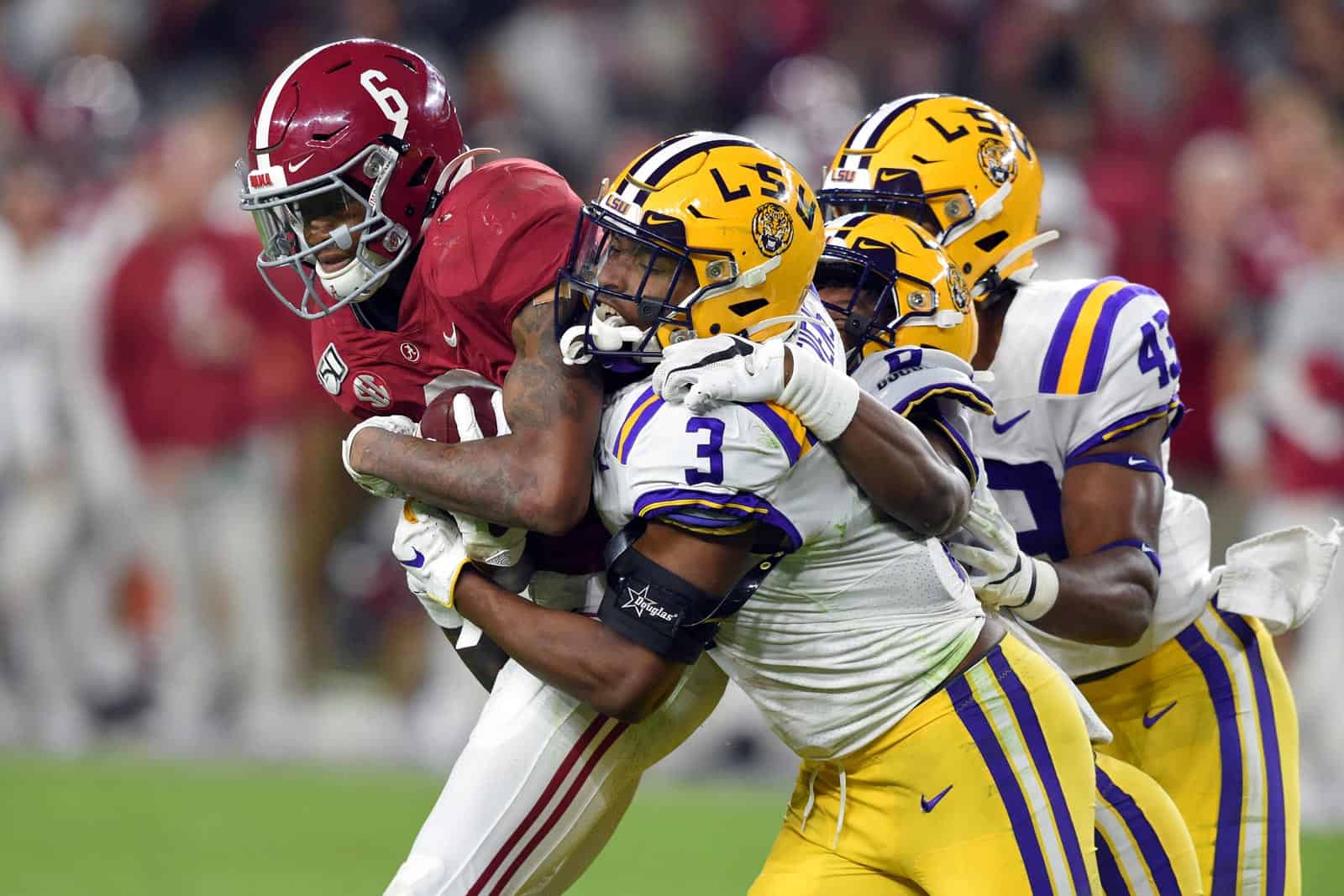 The action kicks off on Thursday night with a pair of games on CBSSN, the most entertaining of which ought to be Air Force’s rushing offense – the top ranked unit nationally – squaring off with a Utah State D ranked No. 101 in the FBS vs. the run. It airs at 9:30pm EST.

Tune in on Friday to see if (25) Louisiana can improve to 9-1 by beating Appalachian State for the first time in history (8:30pm EST, ESPN). The Cajuns have had eight whacks at the Mountaineers and have never come out on top.

Saturday’s Noon EST timeslot includes (5) Texas A&M trying to stay atop the rankings against a young Auburn team that has quietly managed to earn a No. 4 rank in the SEC in scoring D (ESPN) and (15) Oklahoma State – a mere 1.5 point favorite – at TCU (ESPN2). Quality alternatives include Nebraska at Purdue (Big Ten Network) and Arkansas at Missouri (SEC Network), both of which should be closely contested.

Though the anchor of the midafternoon is (12) Indiana at (16) Wisconsin (3:30pm EST, ABC), don’t sleep on West Virginia at (9) Iowa State at the same time on ESPN. The Cyclones need a win to get to the Big 12 title game and will have to get it done against a Mountaineer defense ranked No. 14 nationally in scoring, No. 21 vs. the run and No. 1 (again, in the FBS) vs. the pass.

The key prior to primetime is being ready early – at 5:30pm EST on ESPNU – for the newly scheduled (13) BYU at (18) Coastal Carolina. For more on this “there’s more than meets the eye” matchup, check out our “Perfect Storms” section below.

Under the lights, it’s a handful of contests featuring top-ranked teams playing opponents they should easily vanquish – (3) Clemson at Virginia Tech (7:30pm EST, ABC), (1) Alabama at LSU (8pm EST, CBS), (10) Miami Fla. at Duke (8pm EST, ACC Network) and Baylor at (11) Oklahoma (8pm EST, FOX). As far as which one has the best chance of being a shocking upset, Vegas has the Hurricanes as 14.5-point favorites, the best odds of the bunch.

The most competitive option in the late-night slot ought to be UCLA at Arizona State which kicks at 10:30pm EST on FS1. It’s paired well with a refreshing Riesling and/or Oregon State at Utah on ESPN.

Don’t forget to check back in on Sunday evening for Washington State at (20) USC – if it comes to fruition it’s at 7:30pm EST on FS1.

In a series of events that could only occur in 2020, these two undefeated squads inked a deal to play a mere three days before kickoff (CCU was slated to host Liberty while BYU had a bye). For each non-Power 5 squad, it’s an opportunity to add a key element to their resume – a second win over a ranked foe (the Cougars smashed then No. 21 Boise State 51-17 on Nov. 6 while the Chanticleers edged then No. 21 Louisiana 30-27 on Oct. 14). On paper, the pairing is one of the best strength vs. strength affairs of the season. Key matchups include BYU’s No. 8 ranked passing attack taking on a Coastal Carolina D ranked No. 12 vs. the pass and, on the flip side, the Chanticleers No. 19 ranked ground game grappling with the Cougars’ No. 6 ranked rush D. These are all national rankings. Tune in to see which team’s stats are for real and therefore which squad earns upgraded status in the intriguing CFP conversation. For BYU, keep an eye on junior QB Zach Wilson (#1) (No. 3 in the FBS in passer rating and TD passes) and junior WR Dax Milne (#5) (No. 21 in the FBS in receiving yards per game). For Coastal, check out senior DE Tarron Jackson (#9) (No. 3 in the FBS in sacks and No. 6 in tackles for a loss) and junior CB D’Jordan Strong (#7) (tied for the most interceptions in the FBS).

The first of two Saturday night games that have the potential to get ugly, this matchup features Clemson’s No. 3 ranked passing attack taking on a Virginia Tech D ranked an un-Hokie like No. 105 vs. the pass. Where the Tigers have hung up 430-plus air yards on each of its last two opponents, Virginia Tech coughed up 404 passing yards to Pitt in its last outing, a 47-14 beatdown. This game has all the right stuff to catapult Clemson junior QB Trevor Lawrence (#16) – which Vegas currently has at No. 3 in the Heisman race – back to the top of the charts.

The second of what could be two aerial exhibitions in primetime, flip over to this one to see Alabama’s No. 4 ranked passing machine take on LSU’s No. 120 ranked pass D. Where only three teams in the nation have averaged more than the Tide’s 358 air yards per game, only seven have allowed more than the Tigers’ 303. While yes, this is a rivalry game where anything could happen, the numbers rarely lie and, in this case, if decoded, they spell out a clear message – OMG. Like Clemson’s Lawrence, this matchup could be tailor-made for Alabama junior QB Mac Jones (#10) who currently sits at No. 2 in Vegas’ Heisman odds. Could the pigskin slinger who puts up the most-obscene Week 14 numbers become the guy who holds the Heisman trophy aloft, virtually, on Jan. 5, 2021?

The Battle Line Trophy – Arkansas at Missouri – series started in 1906 – Missouri leads 8-3 and has won four-straight. Rematch of the 2007/08 Cotton Bowl and the 2003 Independence Bowl.

Introduced in 2015, the Battle Line Trophy outlines the states of Arkansas and Missouri as they would appear on a map. Crafted primarily of silver, it weighs in at a hefty 180 pounds and is nearly seven feet tall. It’s also the natural continuation, geographically, of the Golden Boot, the traveling prize for the Arkansas-LSU series. Both trophies were designed by Arkansas student-athlete David Bazzel. The Razorbacks took possession of the first-ever Battle Line and the Tigers have won each game with the prize on the line since.

Established in 2015 The Belt is just that, a championship belt complete with football bling. It may be the best swag in all of college football. The two schools are located a mere 175-miles apart in southern Alabama. The Trojans have worn the belt home on three occasions vs. the Jaguars’ twice.

When (1) Alabama visits LSU this Saturday night it will mark only the third time in history that the two programs have clashed during the month of December. Of the 83 regular season meetings, 68 were played in November, eight were slated for September and five had October dates. That leaves the two December games: Dec. 2, 1904 (a 11-0 shutout win for Alabama) and Dec. 8, 1928 (a 13-0 victory for the Tide).

What – if anything – does it all mean? Well friends, as of now, LSU has never, ever scored a football point on Alabama during the month of December.