Breaking down Week 13 of the 2020 college football schedule 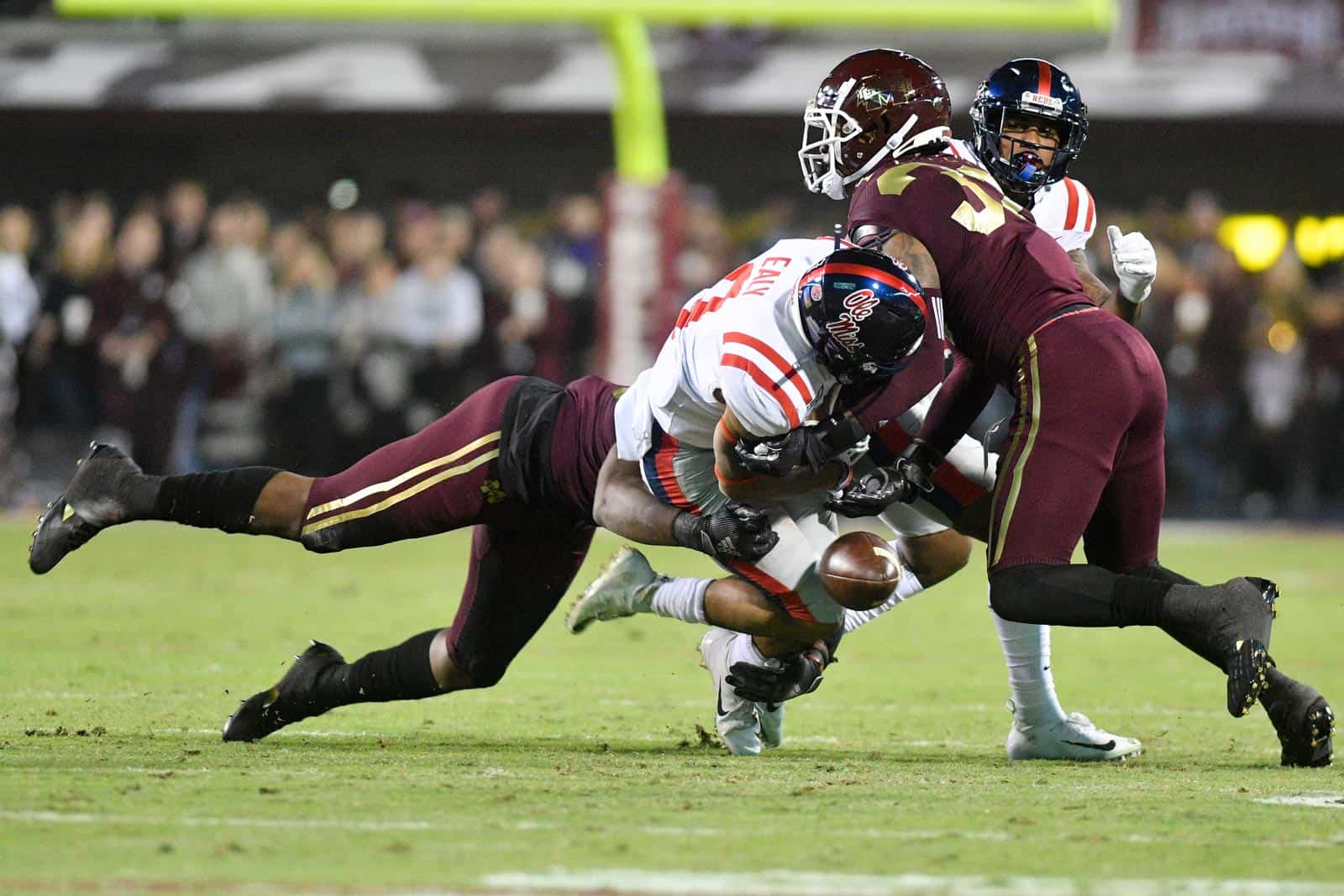 Week 13 is all about Thanksgiving and rivalries – or, perhaps, in 2020, being thankful for the rivalries that are still on the schedule.

The action on Thanksgiving Day is limited to New Mexico at Utah State at 7pm EST on FS1. Friday marks what is the best non-Saturday lineup of the season. Tune in at Noon EST to watch (13) Iowa State (a mere 2.5-point favorite) visit (17) Texas on ABC and Nebraska square off with Iowa on FOX. In the midafternoon, it’s all about (2) Notre Dame at (19) North Carolina (3:30pm EST, ABC) which has all the right stuff to alter the CFP picture. Two entertaining alternatives during the same time slot are UCF at South Florida on ESPN (the Knights are ranked No. 11 in scoring offense while the Bulls are No. 114 in scoring D) and, 30-minutes later, Stanford (a one-point underdog) at Cal on FOX. The evening wraps up with (15) Oregon at Oregon State at 7pm EST on ESPN.

Saturday cranks up at Noon EST with a handful of ranked teams facing seemingly underwhelming opponents – Kentucky at (6) Florida (ESPN), Maryland at (12) Indiana (ESPN2), and Texas Tech at (23) Oklahoma State (FOX). Also on offer is the battle of the Big Ten beaten-downs – Penn State at Michigan – on ABC. For something flying way under the radar check out Kent State (undefeated and ranked No. 1 in the FBS in scoring offense and No. 2 in rushing offense) at Buffalo (also undefeated and ranked No. 9 nationally in scoring offense and No. 5 in rushing offense) on CBSSN.

Primetime kicks off with LSU at (5) Texas A&M (the Aggies haven’t played since Nov.7) at 7pm EST on ESPN. Thirty minutes later, (13) Georgia visits South Carolina on the SEC Network.

If you’re up late eating leftovers tune into Utah (which was supposed to play Arizona State this week) at Washington (which was slated to play in the Apple Cup vs. Washington State) at 10:30pm EST on ESPN.

As a note, this week we’ll switch from using the rankings reflected in the AP Top 25 to those from the brain trust at the CFP committee.

Even though 8-1 Liberty’s one-point loss at NC State cost it a place in the Top 25, it still touts one of the best rushing attacks in the FBS – currently ranked No. 12 nationally.  Watch for the Flames to rebound – explosively – against a UMass D ranked a desperate No. 122 vs. the run. Only five teams in the nation have been more generous. Keep an eye on Liberty junior Malik Willis (#7), the No. 2 rushing QB in the nation, averaging a cool 93 ground yards per game.

Tune in to this one to see if Notre Dame’s defense (currently ranked No. 11 nationally in scoring and No. 4 vs. the run) can hold it’s own against a North Carolina offense ranked No. 10 (in the FBS) in scoring and No. 14 in rushing yards per game. On one side, the Tar Heels are averaging 43.1 points per game while on the other the Fighting Irish are allowing a mere 16.6. Keep in mind that this is only the second time this season that Notre Dame will face an offense ranked higher than No. 56 (out of the 127 FBS teams participating in 2020) in scoring. The first was Clemson – currently No. 6 nationally in scoring (45.4 points per game) – which hung up a season-high 40 on the Irish in a 47-40 decision. Players to watch for Notre Dame include senior LB Jeremiah Owusu-Koramoah (#6) (tied for the eighth most tackles for a loss in the ACC). For North Carolina, check out junior RB Javonte Williams (#25) (tied for No. 2 in the FBS in rushing TDs) and sophomore QB Sam Howell (#7) (tied for the third most passing TDs in the nation).

Awarded to the winner of the Egg Bowl, the Golden Egg was introduced after the 1926 game in Starkville, when underdog Ole Miss scored an unexpected 7-6 win over then Mississippi A&M. Zealous Rebel fans stormed the field after the game, rushing towards the goal posts only to be beat back with cane chairs by State fans. The incident was so ugly that the student bodies decided to present a trophy after the next game “in a dignified ceremony designed to calm fans.” Ole Miss has collected 56 Eggs vs. Mississippi State’s 31. The 1929, 1953, 1957, 1963 and 1968 games all ended in ties.

The Heroes Trophy was introduced in 2011, Nebraska’s first season in the Big Ten. The name was chosen with the intent of honoring one citizen apiece from Iowa and Nebraska for “extraordinary acts”. Thus far, the Hawkeye’s have won the prize on six occasions vs. the Cornhuskers’ three times.

Dating back to 1948, the trophy presented to the winner of the Iron Bowl was the brainchild of the Alabama and Auburn chapters of Omicron Delta Kappa, a national leadership honor society. In January 1978, it was dedicated to Dean James E. Foy V as he retired as the Dean of Student Affairs at Auburn. Prior to taking on that role in 1950, Foy had served as the Assistant Dean of Students at Alabama. The Crimson Tide have won 42 ODK’s vs. the Tigers’ 30.

The second leg of the three-pronged battle between Central Michigan, Eastern Michigan, and Western Michigan. Established in 2005 by the Michigan Sports Hall of Fame, the Michigan MAC is awarded to both a football and basketball recipient. WMU (the current trophy holder) leads the competition in both sports with six football MACs and seven basketball MACs. CMU is next with five each of the football and basketball awards while EMU has held the football version four times and the basketball edition on three occasions.

On Nov. 18, WMU beat CMU 52-44 in Mt. Pleasant. The Eagles would need to first topple CMU this weekend and then knock off the Broncos on Dec. 5 to capture their first Michigan MAC since 2012.

Awarded to the winner of the Civil War, the Platypus Trophy was sculpted (but never officially finished – it’s missing its feet) by an Oregon art student in 1959. Oregon State won the first-ever Trophy game and then retained the prize until 1961 when it disappeared, not to be uncovered again until 2006. It was reintroduced to the rivalry game in 2007. Since then, the Ducks have won the duck-billed mammal 11 times vs. the Beavers’ twice.

Awarded to the winner of the Big Game, the story of the Axe  begins with a series of baseball games between the two schools in 1899. That’s when the Axe was purchased, “probably from Sears” by Stanford fans and painted red. During the three-game series, Cardinal enthusiasts used the Axe to chop up a variety of Cal related items, including beheading a scarecrow wearing school colors. After Stanford blew a late lead in game three, Cal fans stole the Axe.

Not to be confused with the FBS’s other “Interstate rivalry” (The Battle of I-75), the War on 4 is an “annual series of scored competitions across multiple sports programs” at USF and UCF that first started in 2016-17. Not only do the Knights hold a 3-1 advantage over the Bulls on the gridiron since then, but they’ve also won the overall competition each year since its inception. The two schools are located 100 miles apart on Interstate 4 in central Florida.

Referred to as “The Battle of the Bayou,” ULM and Louisiana have played annually since 1997. They also met consecutively from 1953-71 under their previous names – in 1999, Northeastern Louisiana University (NLU) became ULM and the University of Southwestern Louisiana (USL) became Louisiana (Lafayette). The Wooden Boot trophy debuted in 2002 – the Ragin’ Cajuns have won the boot eleven times vs. the Warhawks’ seven.

Ohio University is 23-11 in MAC play since 2016. Amazingly, not one of those 11 losses came by more than a touchdown. So, while Bobcat fans have known defeat, they haven’t known ugly defeat, at least in conference action, recently.

This Saturday OU will try to keep the streak alive vs. Bowling Green, which just so happens to be the last MAC opponent that managed to crush the Bobcats. That game – on Nov. 4, 2015 – was an ever-so-ugly 62-24 decision in favor of the Falcons. Rather than being an anomaly, it came directly after consecutive beatdowns at Buffalo (41-17) and Western Michigan (49-14).