Breaking down Week 13 of the 2019 college football schedule 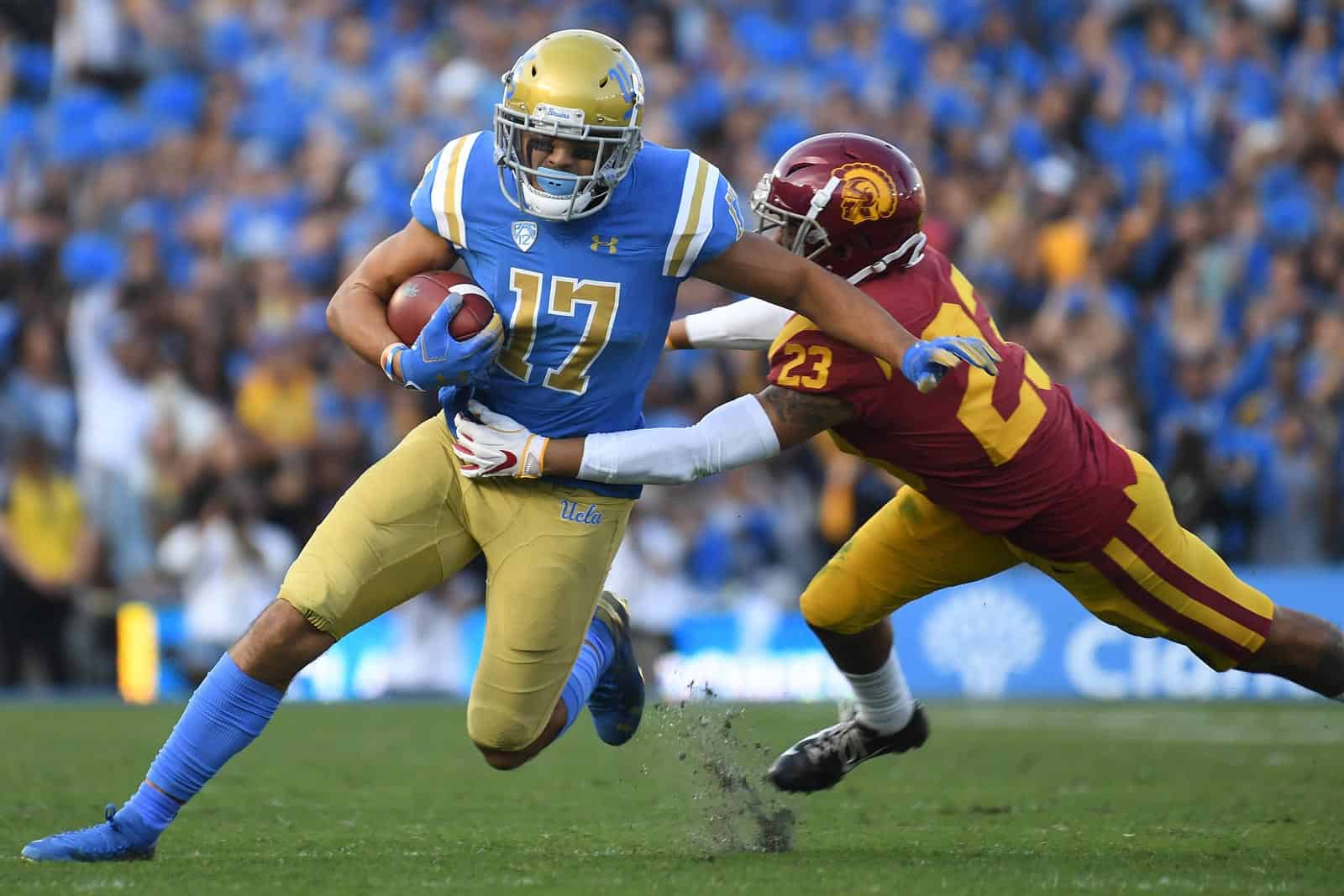 Though there’s lots of compelling action on offer, the highlight of Week 13 may be (2) Ohio State finally – for the first time this season – playing a Top Ten squad in (8) Penn State.

Beyond that, the Playoff picture is all about the “other” two perfect teams staying unblemished (No. 1 LSU hosts Arkansas and No. 3 Clemson is off) and the seven one-loss squads ranked in the Top Ten sealing another crucial victory to remain apart of the conversation for the final slot in the bracket.

Once again, the week kicks off with two MAC contests on both Tuesday and Wednesday nights. Thursday night features the only Power 5 matchup before the weekend (NC State at Georgia Tech at 8pm EST on ESPN) and Friday belongs to the MWC (Colorado State at Wyoming at 9:30pm EST on ESPN2).

Saturday kicks off with what is arguably the game of the week – (8) Penn State at (2) Ohio State at Noon EST on FOX. Alternatives include (10) Minnesota at Northwestern on ABC and Illinois at (17) Iowa on the Big Ten Network – the Illini are trying for a seventh win for the first time since 2011, also the final year of the Ron Zook era.

The mid-afternoon starts early – at 2:30pm EST – with Boston College visiting (16) Notre Dame on NBC. An hour later, it’s (4) Georgia hosting Texas A&M at 3:30pm EST on CBS. Though the Aggies are 7-3 and unranked, their losses were to Clemson, Alabama and Auburn making them a bit of a wolf in sheep’s clothing. Also worth keeping an eye on are (13) Michigan at Indiana (the Hoosiers are a respectable 7-3) on ESPN and Texas at (14) Baylor (who can’t afford a “hangover” loss after last week’s epic comeback by No. 9 Oklahoma) on FS1.

Primetime starts with Arkansas at (1) LSU at 7pm EST on ESPN and then features a string of important games for one-loss teams still in contention for the CFP bracket: (6) Oregon at Arizona State (7:30pm EST on ABC), TCU at (9) Oklahoma (8pm EST on FOX) and (7) Utah at Arizona (10pm EST on FS1).

Tune in to this one on Friday night to see the No. 12 ranked passing offense in America take on the No. 120 ranked secondary. Where only 11 FBS teams have averaged more yards through the air than Colorado State has this season (315.7) only ten have allowed more than Wyoming has (282.1). Though the Rams junior QB Patrick O’Brien (#12) is ranked No. 27 nationally in yards per game (255.2) the real statistical star is junior wide receiver Warren Jackson (#9), his average of 117.5 receiving yards per game make him the fourth-most productive receiver in the FBS.

At least on paper, this one looks to be one of the very best Strength vs. Strength matchups of the entire season. First up, it’s Ohio State’s No. 1 ranked scoring offense taking on Penn State’s No. 7 ranked scoring defense. Next, on the flip side, it’s the Buckeye’s No. 1 ranked scoring defense grappling with the Nittany Lions’ No. 15 ranked scoring offense. The most compelling matchup from a layer down is Ohio State’s ground game – currently No. 4 in the FBS – against Penn State’s defense, currently No. 4 in the nation vs. the run. The combo to watch out for, and what may decide this one, is the Nittany Lion’s No. 84 ranked secondary (their biggest major statistical weakness) taking on the Bucks No. 45 ranked passing game (also the biggest weakness). Keep an eye on Ohio State junior RB J.K. Dobbins (#2), No. 4 in the FBS in yards per game (128.9) and junior DE Chase Young (#2) – who returns from a suspension this week – No. 2 in the FBS in sacks (13.5) and tied for No. 5 in tackles for a loss (15.5).

Despite experiencing a string of injuries at the quarterback position, USC is the owner and operator of the No. 11 passing attack in the land. Combine that with UCLA’s secondary – currently No. 123 in the FBS – and you’ve got the biggest statistical mismatch in Week 13. Where the Trojans are fresh off hanging up 400-plus air yards and four TDs in each of it’s last two outings (both road wins over Pac-12 foes), the Bruins got torched for 335 passing yards and two scores in last week’s 49-3 beatdown at (7) Utah. Check out USC true freshman QB Kedon Slovis (#9), he’s completed 70.8% of his passes, the eighth best mark in the entire FBS and senior WR Michael Pittman, Jr. (#6), third nationally in total receiving yards (1,118).

Awarded to the winner of the “Border War” since 1968, the Bronze Boot is, as advertised, a bronzed jump boot formerly worn by Colorado State alum and Vietnam veteran Jeff Romero, Sr. In one of the coolest traditions associated with a rivalry game, the two schools’ ROTC detachments meet at the Wyoming/Colorado border each year after the contest with the game ball. The school scheduled to host the next meeting runs the ball back to its stadium. The Cowboys have captured the Boot 27 times vs. the Rams’ 24.

First awarded in 2009, the Gansz Trophy honors coach Frank Gansz, a highly regarded, longtime special teams coach in college and the NFL. Gansz played at Navy from 1957-59, was an assistant coach there from 1969-72 and then was the special teams coach at SMU from 2008 until he passed away in 2009. Navy won the first six Gansz’s, SMU captured the trophy for the first time in 2018.

Though the series dates to over 100-years ago, the Golden Boot (formed by combining the two states geographically) wasn’t introduced until 1996, Arkansas’ fifth season in the SEC. The trophy is a 24-karat gold whopper—four-feet high and weighing in at 200 pounds.  LSU has won the Boot 15 times vs. the Razorbacks’ eight.

The winner of the “Battle of I-10” doubles up with two awards. First up, it’s the Silver Spade – the inaugural version, introduced in 1947, was an old prospector’s shovel from an abandoned mine. It was upgraded to the current version in 1955. The Brass Spittoon – officially the Mayor’s Cup – debuted in 1982 when the mayors of El Paso and Las Cruces collaborated to present a second award to the rivalry. UTEP has won 44 Spades and 23 Spittoons vs. New Mexico State’s 25 shovels and 12 spit cups.

Awarded to the winner of the Big Game, the tale of the Axe  begins with a series of baseball games between the two schools in 1899. That’s when the Axe was purchased, “probably from Sears” by Stanford fans and painted red. During the three-game series, Cardinal enthusiasts used the Axe to chop up a variety of Cal related items, including beheading a scarecrow wearing school colors. After Stanford blew a late lead in game three, Cal fans stole the Axe.

One of eight bells awarded in FBS rivalries, USC-UCLA’s Victory Bell dates back to 1939 when the UCLA Alumni Association gave the bell, a massive 295-pounder off a locomotive, to its alma mater. The Bruins rang the bell after each football score for two seasons until 1941, when members of a USC fraternity disguised as UCLA fans, stole the bell during the season opener.

After a series of shenanigans, the two schools signed an agreement before the 1942 game to award the bell to the winner of the cross-town rivalry. The recipient earns the privilege of painting the bell’s carriage its school colors, which the Trojans have done 44 times vs. the Bruins’ 32. Four games (1944, 1958, 1971 and 1989) ended in ties.

When Texas A&M takes the field in Athens, Ga. this Saturday afternoon, it will mark the first time that the Aggies – who jumped ship from the Big 12 in 2012 – have clashed with the (3) Bulldogs in SEC play.

The last time the two schools met was in the 2009 Independence Bowl, a 44-20 win for Georgia. Prior to that it was Week 2 of the 1980 season when A&M rolled into Athens and got shutout 42-0. That Bulldog team went 12-0 and captured the national championship.

The two also met in a home-and-home (the Aggies half was played in Dallas) in 1953-54 with A&M winning both contests. The first meeting was three-years earlier in the 1950 Presidential Cup, an early-December bowl game in College Park, Maryland that lasted only a single season. According to a contribution by Zippy Morocco (a two-sport athlete at Georgia) in Patrick and A.P. Garbin’s Game of My Life Georgia Bulldogs: Memorable Stories of Bulldog Football it was also the first televised game in Georgia football history.