Breaking down Week 13 of the 2017 college football schedule 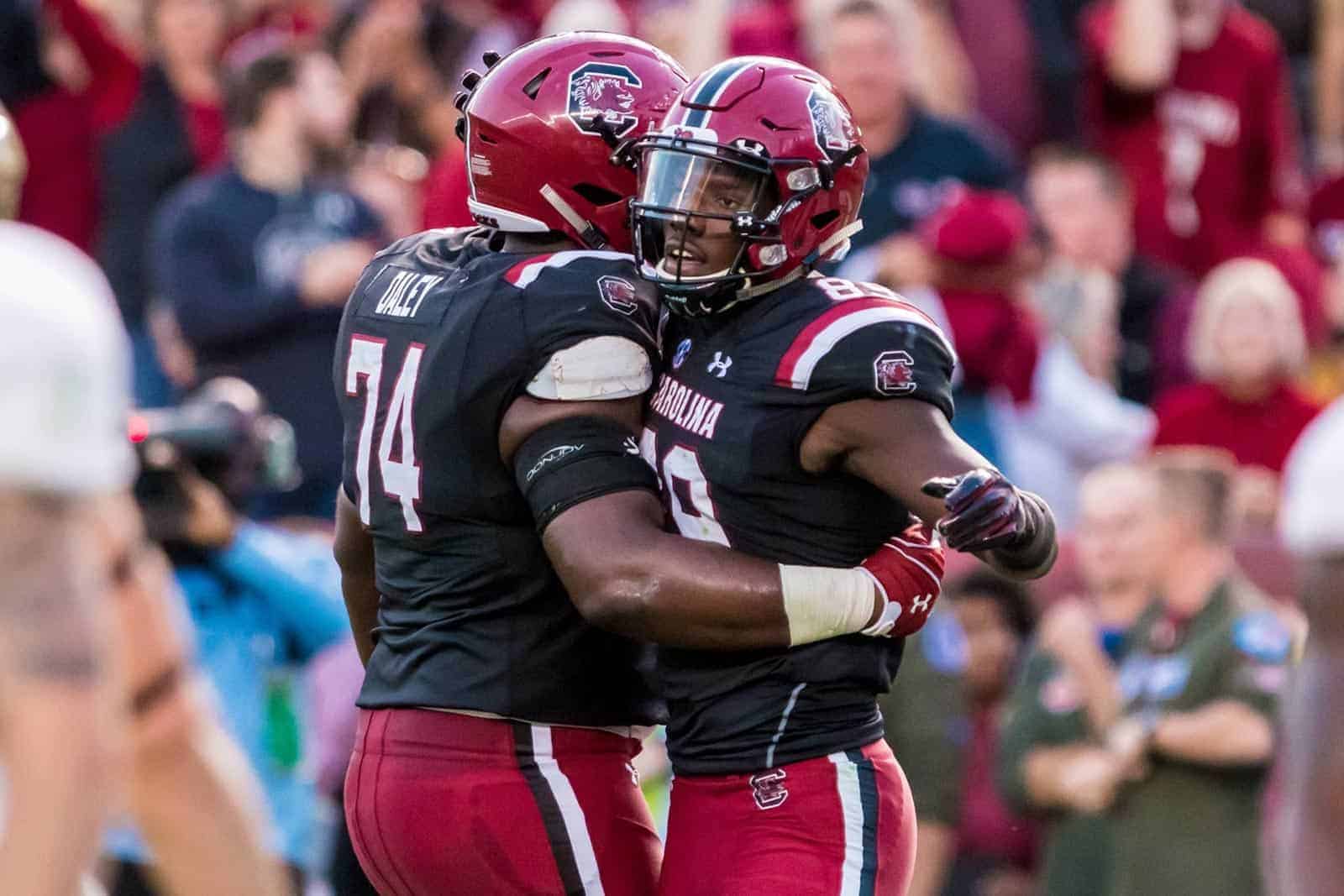 Week 13 of the college football schedule is rivalry week. And, it’s the final full Saturday of the regular season.

The two factors combined mean that a handful of this seasons’ ultimate grudge matches will also decide which teams get one precious step closer to the CFP bracket.

Even if your school is out of the mix, there is so much to be thankful for.

Be sure and step away from the leftovers on Friday at Noon EST when (2) Miami Fla. tries to finish the regular season unscathed at Pitt on ABC. On Saturday, the must-see time slot is 3:30pm EST – that’s when three members of the CFP Top 5 face a serious test to move on. (1) Alabama at (6) Auburn is on CBS, (5) Wisconsin at Minnesota is on ABC and (4) Oklahoma hosts West Virginia on ESPN.

Tune in to watch the No. 3 wide receiver in college football – Buffalo junior Anthony Johnson (#83) – take on Ohio’s No. 110 pass defense. Johnson is one of only six receivers in the nation averaging more than 100 yards per game and his 12 scores are tied for the third most in the FBS. Look for him to have a big day against the Bobcat D – the second most generous unit in the MAC. This is the same group that coughed up 322 receiving yards and four TDs through the air in last week’s lass at Akron.

The Apple Cup wasn’t born until 1962, “in honor of Washington State’s delicious and iconic apples.” Originally, the Huskies and Cougars played for their version of a Governor’s Trophy. If you measure the rivalry in Apples only, Washington has won 39 vs. Washington State’s 16.

Introduced in 2015, the Battle Line Trophy outlines the states of Arkansas and Missouri as they would appear on a map. Crafted primarily of silver, it weighs in at a hefty 180 pounds and is nearly seven feet tall. It’s also the natural continuation, geographically, of the Golden Boot, the traveling prize for the Arkansas-LSU series. Ironically, both trophies were designed by Arkansas student-athlete David Bazzel. Each school has captured the Battle Line once.

The Chancellor’s Spurs debuted in 1996 – the first-ever year of both the new Big 12 conference and Texas and Texas Tech each employing a university system chancellor. The Longhorns have worn the Spurs home 16 times vs. the Red Raiders’ five.

Established in 1996, the Commonwealth Cup is another whopper – four feet high and weighing in at 100 pounds. It’s big enough for the scores of every previous game between the two programs to be listed on its base. Virginia Tech has won 18 Cups vs. Virginia’s three.

Awarded to the winner of the Egg Bowl, the Golden Egg was introduced after the 1926 game in Starkville, when underdog Ole Miss scored an unexpected 7-6 win over then Mississippi A&M. Zealous Rebel fans stormed the field after the game, rushing towards the goal posts only to be beat back with cane chairs by State fans. The incident was so ugly that the student bodies decided to present a trophy after the next game “in a dignified ceremony designed to calm fans.” Ole Miss has collected 55 Eggs vs. Mississippi State’s 29.

The Kentucky Governor’s Cup dates back to 1994, when the two schools renewed their rivalry after a 70-year break. The earlier games were all played between 1912 and 1924, six Kentucky wins by a combined score of 210-0. Since ’94 Louisville has earned a 14-9 advantage.

The Heroes Trophy was introduced in 2011, Nebraska’s first season in the Big Ten. The name was chosen with the intent of honoring one citizen apiece from Iowa and Nebraska for “extraordinary acts”. Thus far, each school has won the prize three times.

Dating back to 1948, the trophy presented to the winner of the Iron Bowl was the brainchild of the Alabama and Auburn chapters of Omicron Delta Kappa, a national leadership honor society. In January 1978, it was dedicated to Dean James E. Foy V as he retired as the Dean of Student Affairs at Auburn. Prior to taking on that role in 1950, Foy had served as the Assistant Dean of Students at Alabama. The Crimson Tide have won 41 ODK’s vs. the Tigers’ 28.

The Land of Lincoln Trophy – (22) Northwestern at Illinois – series started in 1892 – Illinois leads 55-50-5, but Northwestern has won four of the last five.

First introduced in 2009, the Land of Lincoln, which depicts Abraham Lincoln’s iconic hat, was the result of an online contest for both schools’ fanbases. The two teams played for the Sweet Sioux Tomahawk from 1945 to 2008 but it was retired “out of respect for Native American Nations.” Northwestern has won five of the new awards vs. Illinois’ three.

The Legends Trophy honors the first-ever game between the Cardinal and Irish – the 1925 Rose Bowl, a game Notre Dame won 27-10, earning it its second national title. Counted among the legendary that day were Knute Rocke, the Four Horsemen, Pop Warner and Ernie Nevers.

The “big metal can” was the brainchild of dairy farmers from Fresno and Boise in 2005. Though the Bulldogs claimed the first Can, it didn’t make it’s official on-field debut until 2006, when the Broncos triumphed. Thus far, Boise State has carried home the milk eight times vs. Fresno State’s two.

Dating all the way back to 1925, the Old Oaken Bucket was initiated by an alumnus of each school charged with finding a traveling trophy. The duo struck gold at an Indiana farm, where an old bucket, now the Old Oaken Bucket, hung from a well. The first game played for the prize ended in a 0-0 tie, which explains the bronze “IP” attached to the Bucket’s handle. This led to a bronze “I” or “P” being linked to the trophy for each team’s win ever since. So far, 58 “P’s” have been attached vs. 31 “I’s.”

The Palmetto Bowl Trophy replaced the Hardee’s Trophy in 2015, it also marked the first time the state of South Carolina’s rivalry game had an official name. Clemson was a 20-plus point favorite in each of the two Palmetto Bowls, this year Vegas has reduced the line to two touchdowns.

Introduced in 1948, Paul Bunyan’s Axe, was preceded by a wood-crafted Slab of Bacon, awarded to the winner beginning in 1930. The tradition of “bringing home the bacon” was halted in the early 1940s when the slab went missing (it was found in 1994 in Madison). Recorded on the handle of Bunyan’s Axe are the winners of every game since the series began. Wisconsin has taken possession of the Axe 42 times vs. Minnesota’s 24.

Awarded to the winner of the Civil War, the Platypus Trophy was sculpted (but never officially finished – it’s missing its feet) by an Oregon art student in 1959. Oregon State won the first-ever Trophy game and then retained it until 1961 when it disappeared, not to be uncovered again until 2006. It was reintroduced in 2007. Since then, the Ducks have won the duck-billed mammal eight times vs. the Beavers’ two.

The Territorial Cup – Arizona at Arizona State – series started in 1899 – Arizona leads 49-40-1, the two have split the last four.

Dating to 1946, the tale of the Wagon Wheel was first spun by Kent State Dean Raymond Manchester. He claimed the buggy Wheel had belonged to the founder of the institution that eventually became the University of Akron. Though Manchester valued the Wheel, he stated he was “willing to put it up as a trophy,” because “there’s no danger of losing it.” Though bold, he was correct, at least in the short term. Kent State won the first 10 Wheels and overall has retained it 23 times vs. Akron’s 22.  The two schools are located only 12 miles apart, south of Cleveland, Ohio.

Not to be confused with The Battle of I-75, the War on 4 is an “annual series of scored competitions across multiple sports programs” from USF and UCF. It kicked off last season, the Bulls earning bragging rights after downing the Knights 48-31 on the gridiron. The two schools are located 100 miles apart on Interstate 4 in central Florida.

The ACC and SEC are set to finish the regular season with four, annual in-state grudge matches -Louisville-Kentucky, Florida State-Florida, Georgia Tech-(7) Georgia and (3) Clemson-(24) South Carolina. The winners will secure bragging rights not only for their fan bases, but for their respective conference.

Go back 40 years and the scenario was totally different. That’s when two of the four matchups were in-state conference games, as opposed to non-league finales.

Most recently, Clemson-South Carolina was played as an all-ACC affair. The Gamecocks were ACC members from 1953-70. They declared their independence from 1971-91 before inking a deal with the SEC in 1992. The two schools are 9-9 in ACC action – 3-3 in games at Clemson and 6-6 in those played in Columbia.

Prior to that, Georgia-Georgia Tech was an SEC matchup from 1933-63. That’s when the Yellow Jackets were SEC members, before going independent in 1964 and finally landing in the ACC in 1983. Georgia Tech holds a 16-13-2 advantage over Georgia in SEC play, winning the final three contests (1961-63) by a combined score of 73-16.