Breaking down Week 12 of the 2020 college football schedule 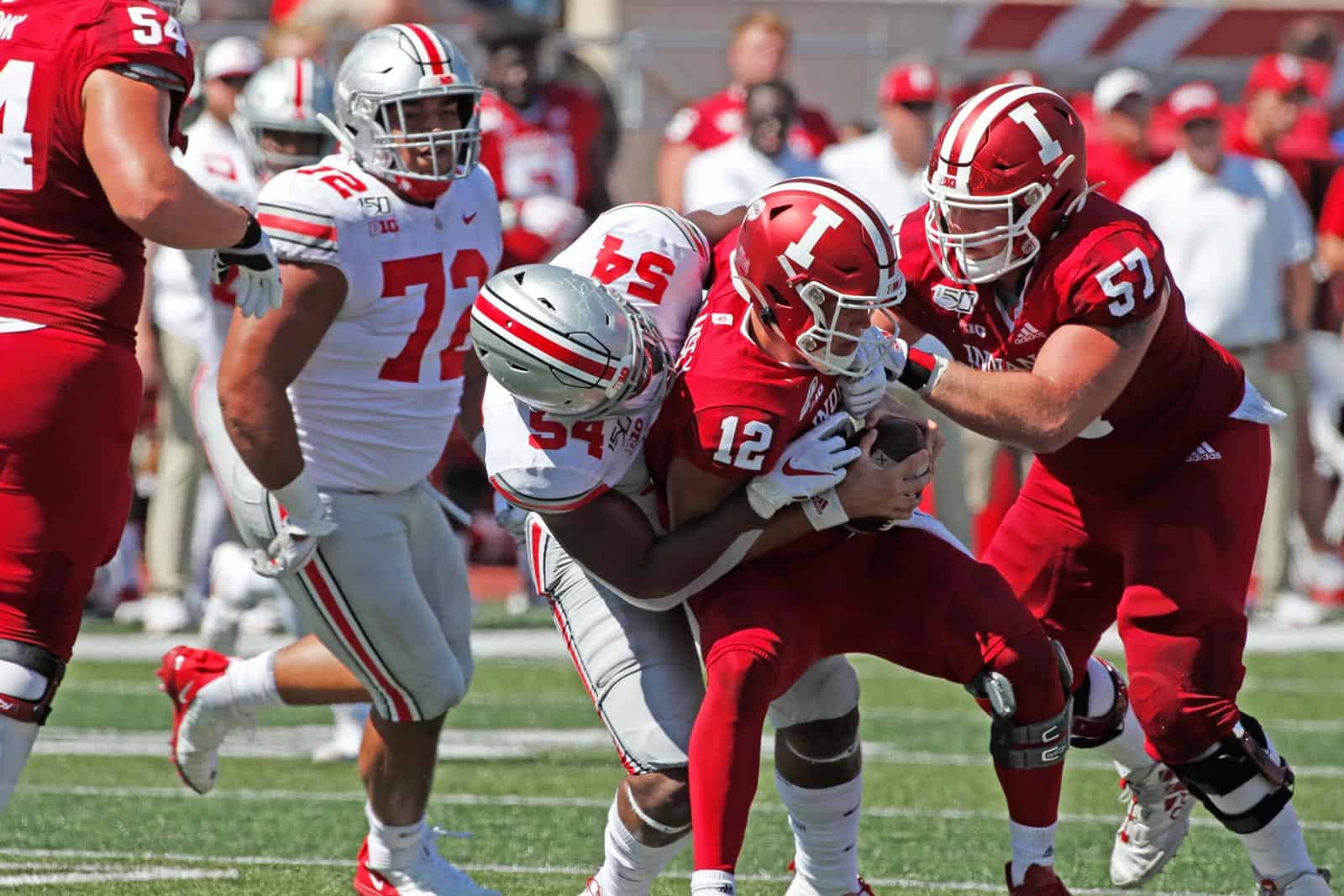 After a Week 11 devoid of any ranked vs. ranked matchups, Week 12 offers up three such showdowns, one between members of the AP Top Ten.

The week began with five MAC contests spread out between Tuesday and Wednesday leaving Buffalo and Kent State (from the East division) as well as Western Michigan (from the West) undefeated.

The action resumes on Thursday night with Tulane at (25) Tulsa (7:30pm EST, ESPN). Of the four options featured on Friday the most competitive matchup ought to be Purdue at Minnesota (7:30pm EST, Big Ten Network) with Syracuse at Louisville (7pm EST, ESPN) as an entertaining second choice.

Saturday kicks off with (9) Indiana at (3) Ohio State at Noon EST on FOX. Compelling alternatives include App State at (15) Coastal Carolina – both defenses are ranked in the top 15 nationally in scoring defense – on ESPN 2 and LSU (a 2.5-point underdog) at Arkansas on the SEC network.

Though the anchor of the midafternoon is (10) Wisconsin at (19) Northwestern (3:30pm EST, ABC), don’t sleep on (7) Cincinnati at UCF at the same time on ESPN – check out the details of this intriguing pairing in our “perfect storms” section below.

Primetime is home to Bedlam – (14) Oklahoma State at (18) Oklahoma – at 7:30pm EST on ABC. Quality options to flip over to include Mississippi State (despite their struggle to score points, the Bulldogs are ranked No. 18 in the FBS in passing offense) at (13) Georgia (currently ranked an un-Georgia like No. 98 vs. the pass) on the SEC Network and (21) Liberty – which came into the season never winning a game vs. an ACC program and is now looking to conquer its third such opponent – at NC State on RSN/ESPN3.

One of the best under-the-radar matchups thus far this season, tune in to this one to watch two of the best running attacks in the nation (both offenses employ the triple option) take on two of the best rushing defenses in the FBS. First up, it’s Georgia Southern’s No. 4 nationally ranked rushing attack taking on Army’s No. 19 nationally ranked rush D. Next, it’s the Black Knight’s No. 2 ranked ground game trying its luck vs. the Eagles’ No. 10 ranked rushing defense. Throw in the fact that both squads are quietly 6-2 and this pairing has all the right stuff to be the Battle Royale that nobody is talking about.

At 4-0 Northwestern is off to its best start since 2015. Anchoring the success is a defense ranked No. 7 – nationally – in scoring, allowing a paltry 14 points per game. The Wildcats have also earned a top ten rank vs. the run, currently at No. 8 in the FBS. Cue up Wisconsin, ranked a not-so-surprising No. 8 nationally in rushing offense, and it’s a potential strength vs. strength matchup. In one corner it’s the best ground attack in the Big Ten and in the other it’s the league’s top rush defense. Keep an eye on Northwestern senior linebackers Chris Bergin (#28), Blake Gallagher (#51) and Paddy Fisher (#42), currently ranked No. 5, 6 and 7 respectively in the Big Ten in tackles.

Undefeated Cincinnati is currently ranked No. 3 in the FBS in scoring D, No. 19 vs. the run and No. 21 vs. the pass. It’s the same defense that only gave up 13 points to an SMU offense that’s scored an average of 39 points per game this season and 10 to a Memphis attack averaging 33. Can the Bearcats do it again vs. a UCF offensive machine ranked No. 11 nationally in scoring (averaging 44 points per game), No. 20 in rushing yards per game and No. 1 in passing yards per game? The answer could alter the entire postseason picture. Key players for UCF include sophomore QB Dillon Gabriel (#11) (No. 1 in the FBS in passing yards per game) and senior WR Marlon Williams (#6) (No. 4 in the nation in receiving yards per game). For Cincinnati, check out senior CB Coby Bryant (#7) and sophomore CB Ahmad Gardner (#12) – with three interceptions apiece they’re both tied for the second-most in the nation.

The original traveling prize for Bedlam was the clapper from the bell that hung in Old Central on the Oklahoma State campus. The first time the Cowboys (originally the Oklahoma A&M Aggies) ever beat the Sooners, in 1917, the bell was rung all night. The clapper was eventually absconded, changing hands until 1966, when the two schools agreed to use it as a trophy. It has since been replaced by a crystal bell. Oklahoma has won the crystal clapper 44 times vs. OSU’s 9, the 1992 game ended in a tie.

First awarded in 2008, the Bronze Stalk “depicts several cornstalks recognizing the Midwestern landscape surrounding DeKalb and Muncie.” The two campuses are located 285 miles apart in neighboring states. Ball State captured both the first and most recent Stalk but has sent home the sheaf with NIU every other year.

Though the series dates to over 100-years ago, the Golden Boot (formed by combining the two states geographically) wasn’t introduced until 1996, Arkansas’ fifth season in the SEC. The trophy is a 24-karat gold whopper—four-feet high and weighing in at 200 pounds.  LSU has won the Boot 16 times vs. the Razorbacks’ eight.

Established in 2003, the Battle for the Palladium celebrates the two schools’ links to mythology. For Troy and the Trojans, it’s the ancient city and its citizens, while for Middle Tennessee it’s Lightning, the schools’ blue-winged mascot that resembles Pegasus. According to legend, the original Palladium was a wooden statue of Athena that was held in Troy to keep the city safe. The travelling football trophy version is three-feet tall and is crafted from basswood. The Trojans have won seven wooden Athena’s thus far vs. the Blue Raiders’ three. The two shared membership in the Sun Belt from 2004-12, when MTSU left for C-USA.

The Victory Cannon is an actual trophy as opposed to an actual weapon – a traveling prize that honors the cannons that both schools traditionally discharge on game days. It was first awarded in 2008 to the winner of what’s also known as the “Central-Western” rivalry. WMU has won the Cannon seven times vs. CMU’s five.

Dating to 1946, the tale of the Wagon Wheel was first spun by Kent State Dean Raymond Manchester who claimed he had possession of a buggy wheel that had belonged to the founder of the institution that eventually became the University of Akron. Though Manchester valued the Wheel, he stated he was “willing to put it up as a trophy,” because, if his school and its rival were to meet on the gridiron, “there’s no danger of losing it.” Though bold, he was correct, at least in the short term – Kent State won the first 10 Wheels, but since then the Zips have earned a 24-15 advantage. The two schools are located only 12 miles apart, south of Cleveland, Ohio.

When you see the score of the Middle Tennessee at Troy game flash across the bottom of your screen this Saturday, you may experience a sneaking feeling of deja vu. If so, you’ll be correct because this is the second time the two teams have clashed – on the gridiron – this season.

That’s right, the Blue Raiders and Trojans – who play for the above explained Palladium Trophy – met on Sept. 19 in Murfreesboro, a decisive 47-14 win for Troy. For MTSU, the double-booking allowed it to replace a Nov. 21 date vs. UConn, which remained steadfast in its decision not to field a football squad this season. For Troy, it replaced a Nov. 21 road trip to square off with Tennessee which – along with the rest of the SEC – cancelled its entire non-conference slate this year.

Though this unique “home-and-home in the same season” scenario might seem like just another crazy byproduct of 2020, Liberty and New Mexico State clashed twice in both 2018 and 2019. That’s four meetings in a mere 421 days! According to Eric Single of SI.com, the 2018 double-booking was the “first time two Division I football teams have played twice in the regular season since 1998, when UMass met UConn on Oct. 24 and Nov. 21.”