Breaking down Week 12 of the 2019 college football schedule 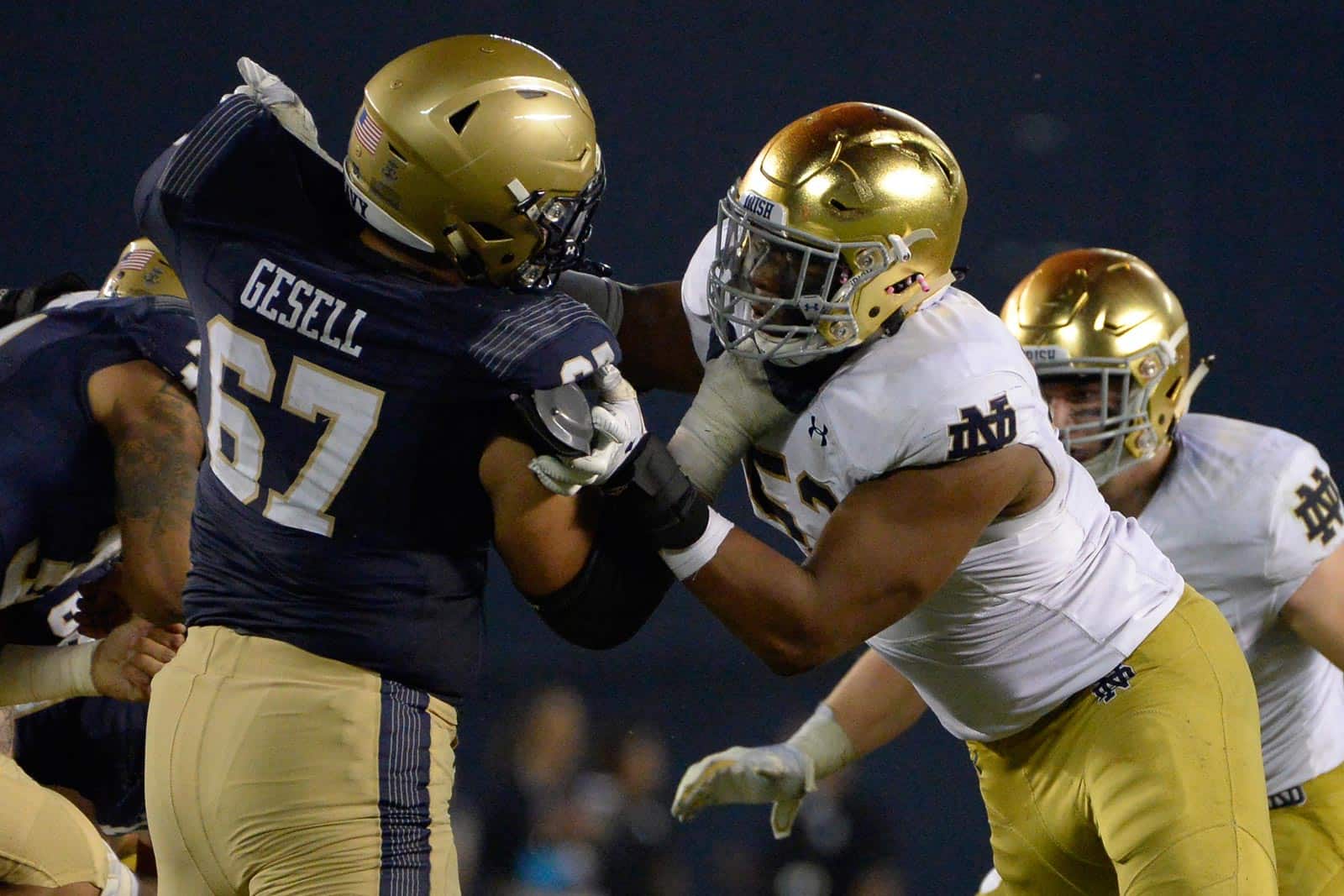 Despite not having a star-studded undefeated vs. undefeated blockbuster game on offer, Week 12 should be one of the most exciting Saturdays of the season.

On offer are a whopping four ranked vs. ranked meetings with the bulk of the goodness coming in the midafternoon time slot. Plan on tuning in after lunch and never looking back.

Things kick off with two games apiece Tuesday through Friday nights. The MAC owns the first five contests leading up to Thursday night’s clash between North Carolina and Pitt (8pm EST on ESPN), also the only Power 5 matchup prior to Saturday. Friday night features a C-USA tilt at 7pm EST (CBSSN) and a Mountain West game at 9:30pm EST (ESPN2).

Saturday’s early gift is Indiana – quietly 7-2 – visiting (9) Penn State (Noon EST on ABC), though the Hoosiers didn’t make it in into the CFP rankings this week, they’re No. 24 in the AP and No. 25 in the Coaches. This one syncs up well with a trio of top-ranked teams on the road vs. divisional opponents – (5) Alabama at Mississippi State (ESPN), (11) Florida at Mizzou (CBS) and (14) Wisconsin at Nebraska (Big Ten Network). Don’t forget to check out the rivalry tilt between Michigan State and (15) Michigan at the same time on FOX.

Tied with ULM/Georgia Southern for the biggest statistical mismatch in Week 12, tune in to this one to watch Oklahoma State’s No. 9 ranked rushing attack do its thing vs. a Kansas D ranked No. 126 against the run. It’s the best ground game in the Big 12 taking on the league’s most generous defense. The Jayhawks are fresh from coughing up a season-high 342 rushing yards and five scores to (24) K-State, an offense currently ranked No. 35 – or 26 slots below Oklahoma State – in rushing yards per game. Keep an eye on sophomore Cowboy RB Chuba Hubbard (#30), the No. 1 rusher in college football – he’s averaging a cool 178.22 yards per game and has eclipsed the 200-yard mark on four occasions this season.

Georgia Southern is the owner and operator of the No. 11 ranked rushing attack in the FBS, hanging up 335 yards and three scores on then (20) Appalachian State in its 24-21 upset victory on Oct. 31. Enter in ULM – home of the No. 128 ranked rush defense – and it’s a recipe for a yard-a-palooza. Only two teams in the entire nation have allowed more ground yards per game than have the Warhawks (255.11). Players to watch include Georgia Southern’s dynamic junior trio of RB J.D. King (#15), RB Wesley Kennedy III (#12) and QB Shai Werts (#1), combined they have 1,507 rushing yards and 13 TDs.

After starting the season ranked No. 10 in the AP, Texas finds itself 6-3 and No. 19 in the second CFP rankings, well out of the dance off for bigger prizes. It’s defense that’s cost the Longhorns, holding a No. 14 rank in scoring offense vs. a No. 89 rank in scoring D. Further pinpointing the issue, they’re a decent No. 54 against the run vs. an awful No. 124 against the pass. This makes this Saturday’s clash with Iowa State – currently No. 8 in the nation in passing yards per game – ominous. Iowa State is led by sophomore QB Brock Purdy (#15), No. 6 in the FBS in yards per game (316.6).

Will LSU be hung over after it’s epic victory over (5) Alabama last Saturday in Tuscaloosa? What ought to help cure the celebratory headache and nausea is Ole Miss’ No. 117 ranked pass defense, sure to be a balm for LSU’s passing attack, currently ranked No. 2 in the FBS. Indeed, tune in to this one to see the SEC’s most prolific passing attack take on the league’s most generous secondary. Though you’ve surely heard of LSU senior QB Joe Burrow (#9), did you know that he’s the most accurate passer in college football completing 78.9% of his passes thus far? That’s 10.7% better than (2) Ohio State’s Justin Fields at 68.2%.

An actual firearm, Bridger’s Rifle (a .50-caliber Rocky Mountain Hawken rifle) honors Jim Bridger, the “foremost mountain man in the history of the American West.” One of the first Americans to visit the territory that became Yellow Stone National Park, Bridger also is credited with discovering the Great Salt Lake. “Bridger’s Battle” kicked off in 2013, the name of each year’s winner inscribed on the maple stock of the rifle. Utah State has won the weapon four times vs. Wyoming’s two.

Perhaps the most uniquely named CFB award, the Floyd of Rosedale is a bronze statue of a pig honoring an actual pig. The original animal was the price of a 1935 bet on the game between Minnesota Governor Floyd Olson and Iowa Governor Clyde Herring. The pig, a prize hog, hailed from Rosedale, Iowa.

The Golden Gophers won the real pig in a 13-6 decision, ultimately finishing the season 8-0 and capturing the second of three consecutive national titles. Since then, they’ve brought home the bronze edition of Floyd 41 times vs. Iowa’s 40. The 1970 and 1951 contests both ended in ties.

The Freedom Trophy – (14) Wisconsin at Nebraska – series started in 1901 – Wisconsin leads 9-4 and has won six-straight. Rematch of the 2012 Big Ten championship game.

The Freedom Trophy debuted in 2014, “paying tribute to the brave men and women who have fought in our nation’s wars.” The trophy itself depicts one half each of Wisconsin’s Camp Randall Stadium (built on a Civil War training ground) and Nebraska’s Memorial Stadium (dedicated to veterans). An American flag rises out of the conjoined arenas. The Badgers have won all five games where The Freedom Trophy was on the line.

The Magnolia Bowl and its trophy didn’t debut until 2008, after both student bodies participated in a “Name that Rivalry” contest. The original trophy, reportedly damaged after the 2013 contest, was replaced in 2014 with a redesigned edition aimed at being a “better representation” of the rivalry. LSU has won the Magnolia seven times vs. Ole Miss’ four.

One of two FBS “can” trophies (both of which Fresno State plays for) the “Battle for the Old Oil Can” debuted in 2011 after a contest aimed at naming the rivalry and establishing a traveling trophy. The repurposed antique “recounted the discovery of an old oil can from Fresno (circa 1935) that was supposedly recovered during a San Diego State campus building project.” The Bulldogs have had the can in their garage five times vs. the Aztecs’ three.

The Paul Bunyan – Governor of Michigan Trophy – Michigan State at (15) Michigan – series started in 1898 – Michigan leads 70-36-5 but the two have split the last four, the visiting team winning on each occasion.

First presented in 1953, the Paul Bunyan was donated by then Michigan governor Gerhard Mennen Williams to honor Michigan State’s inaugural season in the Big Ten. All-in-all, the trophy is a whopping nine-feet tall, featuring Bunyan standing with one foot on each side of the state, each school’s flag claiming its half. The Wolverines have earned 37 Bunyan’s vs. the Spartans’ 27. The 1958 and 1963 games both ended in ties.

The Ram-Falcon was the brainchild of the Air Force ROTC unit at Colorado State. First awarded in 1980, the trophy itself is a depiction of a Ram and Falcon squaring off atop a wooden base. Air Force has captured the prize 24 times vs. CSU’s 15.

First awarded in 2011, Rip Miller was a member of Notre Dame’s Seven Mules, the line that blocked for the legendary Four Horseman from 1922-24. Miller went on serve as an assistant at Navy from 1925-30, taking over the head job in 1931. As a coach, he was part of the effort to establish an annual game between Navy and Notre Dame. Miller finished his career as an assistant athletic director in Annapolis, a post he held from 1948-74. The Irish have won the prize honoring his legacy eight times vs. the Midshipmen’s once, a 28-27 victory in Jacksonville, Fla. in 2016.

The Saddle Trophy – TCU at Texas Tech – series started in 1926 – Texas Tech leads 32-26-3 but the two have split the last four, the visiting team winning on each occasion.

A renewed tradition, in 2017 the Saddle Trophy was awarded for the first time in 47 years. The original prize dates to 1961, Tech’s second season in the Southwest Conference, when the Lubbock Avalanche Journal and the Fort Worth Star-Telegram hooked up to brand the rivalry as “The West Texas Championship of the Southwest Conference.” The Saddle was in use until 1970, when it mysteriously disappeared. At that time, each school had won the traveling prize five times apiece. When TCU joined the Big 12 in 2012 there was a push to resurrect the award. Each team has won The Saddle once since the tradition was renewed.

When (23) Navy visits South Bend to take on (16) Notre Dame this Saturday, it will mark the first time in 41-years that the two teams have both been ranked in the AP Top 25 at game time.

As for Navy, after losing to Notre Dame it dropped consecutive games at Syracuse and at Florida State. After blanking Army 28-0 in the season finale and beating BYU in the Holiday Bowl, it also finished 9-3. The Midshipmen were not included in the final AP.

The real reason Notre Dame’s sellout streak is ending is because fans are starting to stay away from the stadium in droves, being tired of the 3-decade-long national title drought which is the longest among the collective conference memberships in the Power 5, assuming Notre Dame is its own conference,

The only thing that might start a new sell-out streak is a national title. And it’s not gonna happen with Kelly at the helm. They need someone like Urban Meyer.