Breaking down Week 11 of the 2020 college football schedule 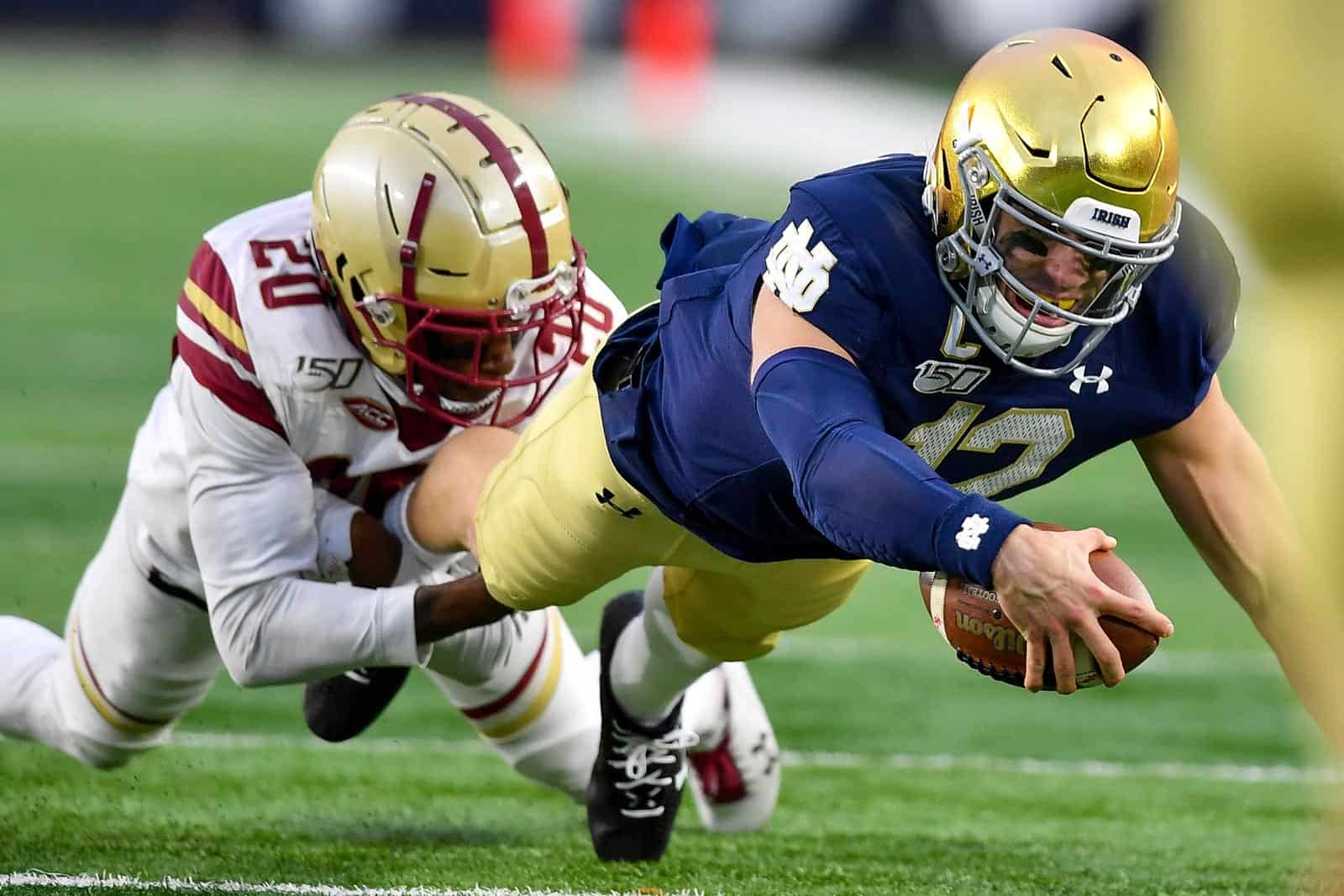 The mistake would be assuming that Week 11 – which doesn’t feature a single ranked vs. ranked matchup – will be inconsequential. No indeed friend, Week 11 is when the upset – or the upsets – will happen.

The only question is – which ranked teams will fall to which unranked squads?

Things get rolling early with six MAC games spread evenly over Tuesday and Wednesday nights. If you must pick just two, we recommend Miami Ohio at Buffalo (Tuesday, 8pm EST, ESPN) and Toledo at Western Michigan (Wednesday, 8pm EST, ESPN). Both feature a pair of undefeated teams trying to avoid their first loss.

Thursday night offers up a single Mountain West contest – Colorado State at Boise State – at 8pm EST on FS1 while Friday evening is home to three games, the most competitive of which should be Iowa at Minnesota at 7pm EST on FS1.

Saturday kicks off at Noon EST with a pair of ranked teams visiting opponents they should be able to vanquish – (9) Miami Fla. – only a two-point favorite – at Virginia Tech on ESPN2 and (10) Indiana at Michigan State on ABC.

The midafternoon continues the Week 11 theme – ranked teams on the road with seemingly winnable scenarios. At 3:30pm EST tune in to (2) Notre Dame at Boston College (ABC) and (20) USC at Arizona (FOX).

Primetime cranks up at 7pm EST with Arkansas at (6) Florida on ESPN and (11) Oregon at Washington State on FOX. Thirty minutes later, check out (13) Wisconsin (in only its second appearance in 2020) at Michigan on ABC and (23) Northwestern (off to a 3-0 start) at Purdue (ranked No. 15 in the FBS in passing offense) on the Big Ten Network.

The late night buffet opens at 10:30pm EST with UNLV at San Jose State on FS2 and then, 30 minutes later, serves up Oregon State at Washington on FS1.

8: Washington has won 8-straight over Oregon State (last loss in 2011)

Undefeated Cincinnati is currently ranked No. 16 nationally in scoring offense, averaging 39 points per game. As opposed to being just another team with a potent passing attack (the Bearcats are No. 91 in the FBS in pass offense), Cincy is getting it done old-school style on the ground (No. 15 in the FBS in rushing yards per game). It’s a strength that sets up ever so well vs. East Carolina, owner and operator of the No. 103 (out of the 123 FBS teams that have posted stats thus far) ranked rushing D in the Americas. In one corner it’s a Cincinnati attack that’s hung up 240-plus rushing yards in four of its six appearances this season and in the other it’s a Pirate D that has coughed up 220-plus ground yards in four of its six outings. Keep an eye on Bearcat senior RB Gerrid Doaks (#23), junior QB Desmond Ridder (#9) and freshman RB Jerome Ford (#24) (an Alabama transfer) – combined they’ve rushed for 1,175 yards and 19 TDs.

Solid defense and a top-ranked pass offense have Nevada off to its best start in a decade. After three games, the Wolf Pack’s aerial attack is ranked a lofty No. 2 in the nation, averaging 397 yards per game. Cue up New Mexico – which finished dead last in pass defense last season and has retained the title of the most generous secondary in the land through two contests this year (the Lobos are allowing an average of 446 passing yards per game) – and a storm’s a brewing. Look out for Nevada sophomore QB Carson Strong (#12), currently No. 2 in the nation in passing yards per game and junior WR Romeo Doubs (#7), the No. 1 receiver in the FBS, averaging 158 yards per game.

The Anniversary Award dates to 1985 when the alumni associations of both schools established a traveling trophy to commemorate the 75th anniversary of each institution. Both were founded in 1910 in northern Ohio – Bowling Green in the west and Kent 150 miles to the east. The Falcons have won 25 Anniversaries vs. the Golden Flashes’ nine.

The Shula Bowl and Trophy kicked off in 2002, the first year the two schools (located only 60-miles apart in South Florida) met on the gridiron. FAU first fielded a football team in 2001, FIU followed in 2002. The game and trophy are named in honor of legendary Miami Dolphins coach Don Shula, who was a “mentor of the first coaches at each school…Howard Schnellenberger (FAU’s head coach from 2001-11) served as Don Shula’s offensive coordinator at Miami during the 1970s, including the Dolphins’ perfect season in 1972 and Don Strock (FIU’s head coach from 2002-06) who was a quarterback for Shula’s Dolphins from 1974-87.”

Perhaps the most uniquely named FBS trophy, the Floyd of Rosedale is a bronze statue of a pig honoring an actual pig. The original animal was the price of a 1935 bet on the game between Minnesota Governor Floyd Olson and Iowa Governor Clyde Herring. The pig, a prize hog, hailed from Rosedale, Iowa.

The Golden Gophers won the real pig in a 13-6 decision, ultimately finishing the season 8-0 and capturing the second of three consecutive national titles. Since then, each school has brought home the bronze edition of Floyd 41 times. The 1970 and 1951 contests both ended in ties.

One of the FBS’s two “Holy Wars” (the other is BYU/Utah), the rivalry game between Notre Dame and Boston College is also referred to as “The Vatican Bowl” and the “Jesuit Invitational” as it pits the only two Catholic institutions in the FBS against one another. Frank Leahy (an Irish alum who played tackle for Knute Rockne) served as the head coach at both schools – amassing a 20-2 record at Boston College from 1939-40 (including a share of the 1940 national title) and a 107-13-9 record at Notre Dame from 1941-53 (including national titles in 1943, 46, 47 and 49). The award itself is a large crystal-cut bowl.

Awarded since 1950, legend has it that the Spittoon was originally purchased at a Lansing antique store by Michigan State grad Gene McDermott “in order to avoid a letdown in the game against Indiana just a week after knocking off rival Notre Dame.” Did it work? Absolutely – the Spartans blanked the Hoosiers 35-0 and took possession of the Spittoon first. MSU has won Ye Ole’ Spit Cup 49 times vs. Indiana’s 12, the 1977 game ended in a tie.

When originally booked in the pre-pandemic era, (10) Indiana was supposed to host Michigan State on Oct. 24th. In revamping the schedule, the Big Ten not only moved the game three weeks into the future, it reversed the venue from Bloomington to East Lansing.

Indiana hasn’t won in East Lansing since 2001. The only two victories it’s scored over the Spartans since then have come in Bloomington.

I love this site, but Notre Dame – Boston College has never been called the “Jesuit Invitational.” Notre Dame is run by the Congregation of the Holy Cross; it is not a Jesuit institution.

Pretty crazy how 11 ranked teams are off this week, due to covid or a scheduled bye. A lot of the heavy-hitters, too.