Breaking down Week 11 of the 2018 college football schedule 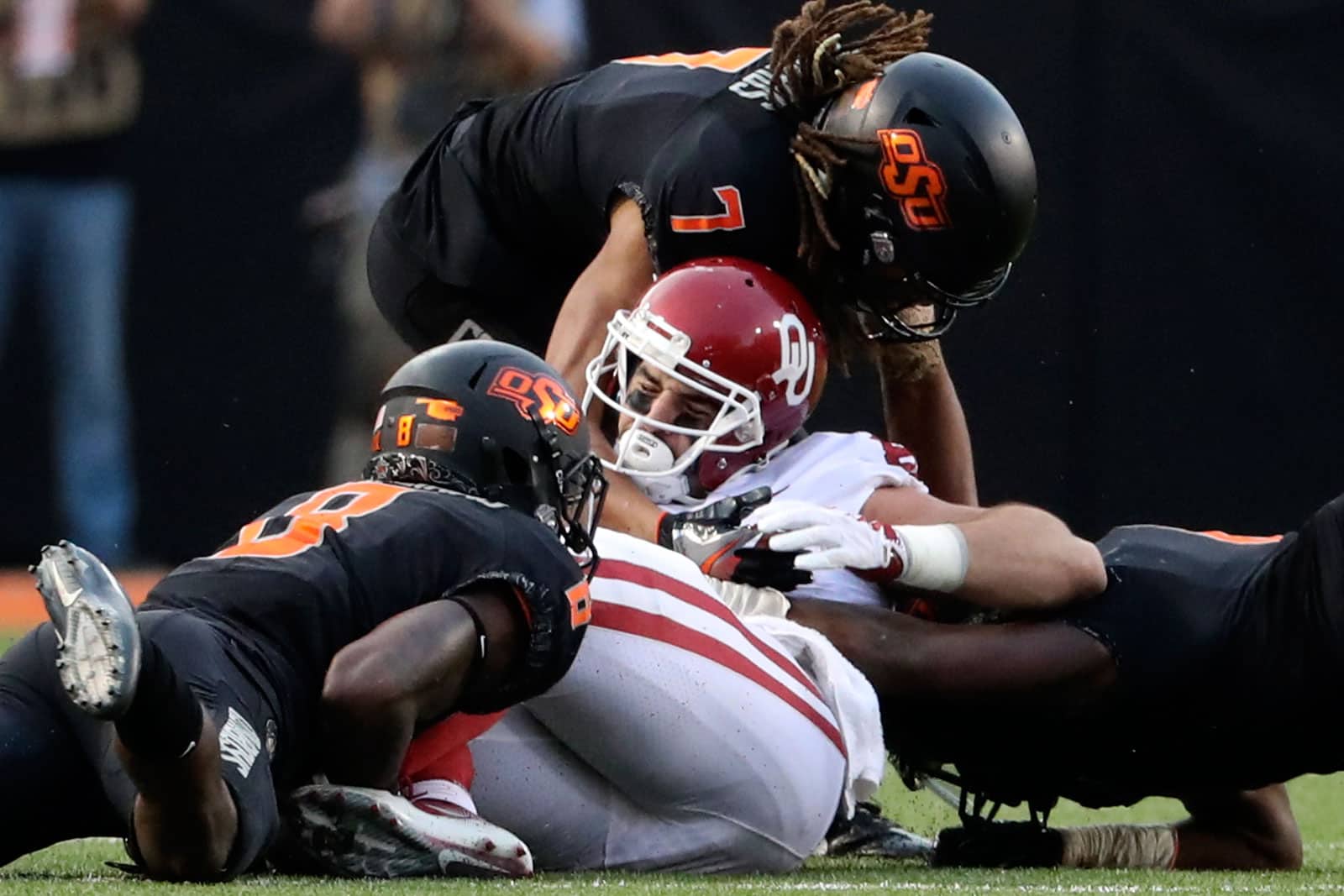 Halloween is over, and Election Day has passed. But just when you though it was safe to not be scared out of your wits – there are only three weekends remaining in college football’s 2018 regular season.

Be not afraid, friends. Whether your team is out of it, still alive or just hoping for that magical sixth win that leads to an all-expense-paid trip to the Bronx, Boise or Birmingham – you still have an excuse for why you can’t go to your niece’s dance recital. The big game. Any big game. They’re all big games.

Week 11 of the college football schedule kicks off with a trio of MAC contests spread across Tuesday and Wednesday nights, the highlight of which might be Ohio’s rushing offense – ranked No. 15 in the nation and fresh off scoring 10 TDs in two weeks – vs. a Miami (of Ohio) D ranked No. 3 in the conference vs. the run. This hidden gem airs Wednesday at 7pm EST on ESPNU.

The three games featured on Thursday and Friday nights all include a ranked team getting tested against a league foe. The biggest statistical mismatch comes Thursday night when (14) NC State’s No. 10 ranked passing attack takes on Wake Forest’s No. 115 ranked pass D on ESPN at 7:30pm EST.

Saturday starts off with a bang – (10) Ohio State at (18) Michigan State at Noon EST on FOX. Of the four other ranked teams also slated for an early start the club with the most on the line is (9) West Virginia, which hosts TCU on FS1.

The mid-afternoon slot belongs, once again, to CBS who’s got (16) Mississippi State at (1) Alabama at 3:30pm EST. Don’t forget to switch over to Oklahoma State at (6) Oklahoma on ABC at the same time.

Primetime kicks off with (24) Auburn at (5) Georgia at 7pm EST on ESPN. Then it’s a 7:30pm EST start for both Florida State at (3) Notre Dame on NBC and (19) Texas at injury-laden Texas Tech on FOX. Thirty-minutes later, (2) Clemson at (17) Boston College gets underway on ABC.

This week’s “check the stats on Sunday” selection, North Texas’ No. 8 ranked passing offense (that’s a national number) ought to explode against an Old Dominion D ranked No. 117 vs. the pass. The Monarchs are giving up 278.7 yards per game through the air, which includes coughing up 353 to Liberty, 300 to FIU, 313 to East Carolina and a whopping 339 to FAU. Individuals with an opportunity to shine include Mean Green junior quarterback Mason Fine (#6) – No. 6 in the FBS in yards per game (319.9) and junior wide receiver Rico Bussey, Jr. (#8) – tied for the third-most TD grabs in college football (10).

Even though (4) Michigan is ranked No. 96 in the FBS in pass offense vs. No. 30 in rushing offense, the only Wolverine listed in Vegas’ Heisman odds is junior quarterback Shea Patterson (#2), also the No. 79 passer in the nation. Introducing senior running back Karan Higdon (#22), his 120.38 yards per game earns him the No. 9 spot in the FBS. He’s rushed for 100-plus yards in his last seven appearances and this week he’ll take on a Rutgers’ defense ranked No. 120 vs. the run. He may night be a Heisman candidate, but he’ll look like one on Saturday.

Tune in to this one to see the No. 1 offense in the SEC (Alabama, scoring 51.3 points per game) take on the No. 1 defense in the SEC (Mississippi State, allowing a measly 12.3 points per game). The most compelling matchup is the Crimson Tide’s aerial attack – currently No. 5 in the nation in yards per game – squaring off with the Bulldogs’ secondary – the No. 7 ranked unit in the FBS. Though Alabama is favored by almost three touchdowns, this one has the potential to at least get interesting. Keep an eye on Mississippi State senior defensive end Montez Sweat (#9), he’s No. 3 in the country in sacks (9.5).

Only one team in the nation has scored more interceptions than has (7) LSU with 15. The Tigers have scored multiple picks on four occasions this season – nabbing two apiece vs. Miami Fla., at (24) Auburn and vs. (5) Georgia and then grabbing four vs. (16) Mississippi State in Week 8. This sets up well for the road trip to Fayetteville, home of an Arkansas squad that’s thrown a combined 15 interceptions (four Razorback quarterbacks have seen action this season) – the third-most in the nation. LSU is led by sophomore safety Grant Delpit (#9), he’s tied for the second-most interceptions in the FBS (5).

The original traveling prize for Bedlam was the clapper from the bell that hung in Old Central on the Oklahoma State campus. The first time the Cowboys (originally the Oklahoma A&M Aggies) ever beat the Sooners, in 1917, the bell was rung all night. The clapper was eventually absconded, changing hands until 1966, when the two schools agreed to use it as a trophy. It has since been replaced by a crystal bell. Oklahoma has won the crystal clapper 42 times vs. OSU’s 9, the 1992 game ended in a tie.

The Chancellor’s Spurs debuted in 1996 – the first-ever year of both the new Big 12 conference and Texas and Texas Tech each employing a university system chancellor. The Longhorns have worn the Spurs home 16 times vs. the Red Raiders’ six.

Though the series dates to over 100-years ago, the Golden Boot (formed by combining the two states geographically) wasn’t introduced until 1996, Arkansas’ fifth season in the SEC. The trophy is a 24-karat gold whopper—four-feet high and weighing in at 200 pounds.  LSU has won the Boot 14 times vs. the Razorbacks’ eight.

One of the three FBS Governor’s Cups, Kansas’ version has been awarded to the winner of the football edition of the Sunflower Showdown since 1969. The Jayhawks and Wildcats have played consecutively since 1911 and from 1902-39 competed for an earlier award called the Governor’s Trophy. K-State has won 28 Cups vs. Kansas’ 20.

The “big metal can” was the brainchild of dairy farmers from Fresno and Boise in 2005. Though the Bulldogs claimed the first Can, the prize didn’t make it’s official on-field debut until 2006, when the Broncos triumphed. Thus far, Boise State has brought home the milk eight times vs. Fresno State’s two.

The O’Rourke-McFadden dates to 2008 and honors the two All-American quarterbacks who played in the first-ever clash between the two schools in the 1940 Cotton Bowl. Clemson’s “Banks” McFadden led his Tigers to a 6-3 win over Boston College’s “Chuckin’” Charlie O’Rourke. The loss was the last-ever in O’Rourke’s collegiate career, the next season he led BC to an 11-0 record and a national championship, the only in school history. The Eagles have only won the trophy once, in 2010.

One of seven bells awarded in FBS rivalries, the Victory Bell has been a part of the North Carolina-Duke series since 1948. Established by a cheerleader from each school to “foster friendly relations and eliminate vandalism between the two neighboring schools” the Tar Heels have rung the Bell 45 times vs. the Blue Devils’ 24.

(23) Fresno State’s road trip to Boise State on Friday night marks the 21st time the two schools have met. It’s also a rematch of the 2014 and 2017 Mountain West title games, both wins for the Broncos.

The two have only met five times where both teams were unranked but have never clashed when both were members of the Top 25. While it’s not shocking that this year’s game marks only the fourth time that Fresno State is the ranked team while Boise State is unranked, what is surprising is that the Bulldogs’ current No. 23 rank isn’t the highest mark it’s carried into one of the meetings.

After losing to Boise State 35-30 and then falling again at Hawaii the next week, Fresno won it’s final five regular season games and then lost to unranked Michigan State in the Silicon Valley Bowl. The ’01 team was led by senior quarterback David Carr, who threw for 4,839 yards, 46 touchdowns and finished fifth in the Heisman vote.