Breaking down Week 10 of the 2020 college football schedule 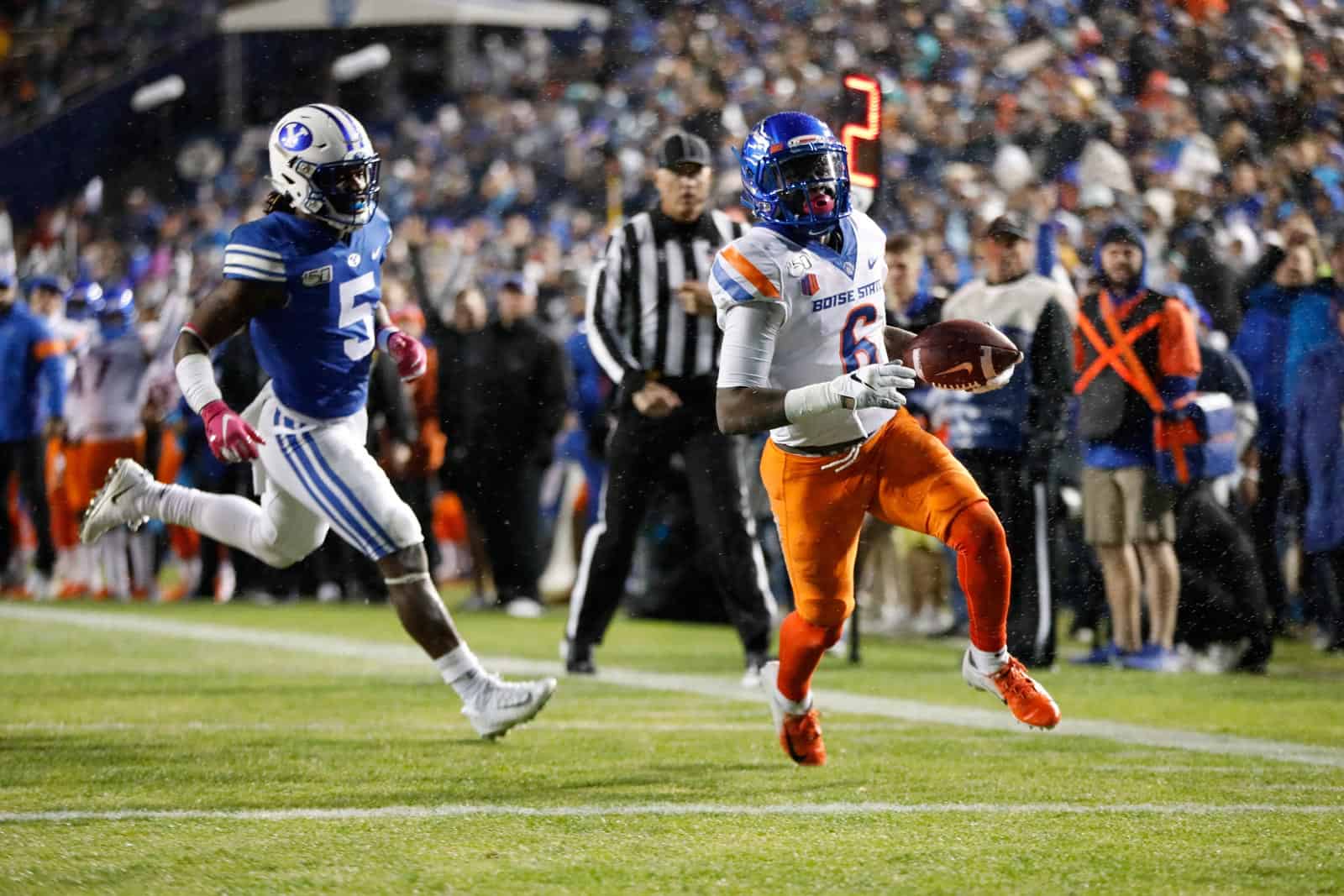 Not only is Week 10 the glorious moment that the Pac-12 and MAC finally join the party, it serves up four ranked vs. ranked matchups, two of which are Top Ten affairs. If that weren’t enough, ready your remotes, because none of the headliners will air on an ABC/ESPN network.

For all we have surely been deprived of, this, the tenth week, should be counted among our rewards.

It all begins with a six-pack of MAC games on Wednesday night. Check out Buffalo at Northern Illinois (7pm EST, ESPN2) which features the No. 5 back in the FBS from 2019 – Bulls’ junior RB Jaret Patterson (#26) – and Bowling Green at Toledo (8pm EST, ESPNU), which is detailed in our “Perfect Storms” section below.

The crown jewel of the midafternoon is (8) Florida vs. (5) Georgia (3:30pm EST, CBS). Alternatives include Houston at (6) Cincinnati on ABC and, 30 minutes later, (14) Oklahoma State trying to rebound at K-State on FOX.

The late-night buffet opens at 10:30pm EST with Washington State at Oregon State on FS1.

7: Mississippi State has won 7-straight home games over Vanderbilt (only loss there in 1971)

Despite posting its worst record (6-6) since 2009, Toledo finished last year ranked No. 2 in the MAC and No. 18 nationally in rush offense. Among the Rockets’ seven returning starters this year are the top two backs and four members of the O-line. It sets up for an opportunity to start the season with a bang vs. a Bowling Green squad that returns six starters to a defense that finished 2019 ranked No. 126 – out of the 130 FBS clubs – in stopping the run. Only four teams – Kent State, ULM, New Mexico State and UMass – allowed more ground yards per game than did the Falcons. To add to the misery, they lose four of the top six tacklers including two starting members of the D-line. Keep an eye on Toledo junior RB Bryant Koback (#22), he finished last season ranked No. 23 in the FBS in rushing yards per game.

USC finished 2019 ranked a lofty No. 6 in the FBS in pass offense, averaging 336 yards per game. That’s just six yards shy of Alabama’s 342 yards per game (No. 3 nationally). Back on campus in 2020 are eight offensive starters, a number that includes the QB, the No. 2 through No. 8 receivers and three members of the offensive line. Cue up Arizona State – which finished last year ranked No. 115 out of the 130 FBS teams in pass D – and the Trojans could look unstoppable in the opener. Rays of hope for the Sun Devils include the return of eight defensive starters (including the top four tacklers) and the addition of new co-DC (and ex-Cincinnati Bengals head coach) Marvin Lewis. This game ought to be a solid early indicator of potential improvement. Check out USC sophomore QB Kedon Slovis (#9) (finished 2019 ranked No. 9 nationally in passing yards per game). Could this be the beginning of a Heisman campaign?

Far more than just Week 10’s juiciest piece of eye candy, this matchup has all the right stuff, at least on paper, to live up to its billing. First up, it’s Clemson’s most potent offensive weapon – it’s No. 8 nationally ranked passing attack (minus starting QB Trevor Lawrence) – squaring off with a Notre Dame D ranked No. 9 vs. the pass. The best pass defense the Tigers have met up with thus far is Wake Forest – currently at No. 45 nationally.  Next up, watch the Irish’s offensive strength – it’s No. 11 ranked ground game – try and do its thing against a Clemson defense ranked No. 15 vs. the run. The best rush defense Notre Dame has faced through six games is Pitt – currently at No. 1 in the FBS – which held the Irish (averaging 231 ground yards per game) to a season-low 115 rushing yards. Which of these four units will prove themselves to be all-world? Players to watch include Clemson true freshman DE Myles Murphy (#98) (leads the team in tackles for a loss and sacks) and senior safety Nolan Turner (#24) (tied for the most interceptions in the FBS).

One of two FBS rivalry awards named after a freeway, the I-75 Trophy replaced the 31-year old Peace Pipe Trophy in 2011. The two schools are located only 30 minutes apart, a quick trip on Interstate 75 in northwestern Ohio. The Rockets have won the newer prize seven times vs. the Falcons once.

Awarded to the winner of the “Border War” since 1968, the Bronze Boot is, as advertised, a bronzed jump boot formerly worn by Colorado State alum and Vietnam veteran Jeff Romero, Sr. In one of the coolest traditions associated with a rivalry game, the two schools’ ROTC detachments meet at the Wyoming/Colorado border each year after the contest with the game ball. The school scheduled to host the next meeting runs the ball back to its stadium. The Cowboys have captured the Boot 28 times vs. the Rams’ 24.

The James Bonham Trophy – (7) Texas A&M at South Carolina – series started in 2014, Texas A&M has won all six games in the series.

Established in 2009 by the student governments of both schools, the Okefenokee is a 10-foot long oar, carved from a 1,000-year old cypress tree from the Okefenokee Swamp.  Covering nearly 700-square miles, the swamp straddles the Florida-Georgia state line. The Bulldogs have paddled home with the Oar six times vs. the Gators’ four.

The Saddle Trophy – Texas Tech at TCU – series started in 1926 – Texas Tech leads 32-27-3 but the two have split the last four, the visiting team winning on each occasion.

A renewed tradition, in 2017 the Saddle Trophy was awarded for the first time in 47 years. The original prize dates to 1961, Tech’s second season in the Southwest Conference, when the Lubbock Avalanche Journal and the Fort Worth Star-Telegram hooked up to brand the rivalry as “The West Texas Championship of the Southwest Conference.” The Saddle was in use until 1970, when it mysteriously disappeared. At that time, each school had won the traveling prize five times apiece. When TCU joined the Big 12 in 2012 there was a push to resurrect the award. The Horned Frogs have won the Saddle twice since the tradition was renewed vs. the Red Raiders’ once.

One of nine bells awarded in FBS rivalries, the Victory Bell has been a part of the North Carolina-Duke series since 1948, established by a cheerleader from each school to “foster friendly relations and eliminate vandalism between the two neighboring schools.” The Tar Heels have rung the Bell 46 times vs. the Blue Devils’ 25. The 1975 game ended in a tie.

The Pac-12 and MAC cranking up their seasons this week means that all ten FBS conferences are officially a part of the 2020 football season. What it doesn’t mean is that all 130 individual FBS programs will participate. Three schools – one Group of 5 member and two independents – have remained steadfast in their resolve not to field a team in 2020.

Old Dominion – the Monarchs cancelled fall sports on Aug. 10th and never looked back. They are the only member of an FBS league (they hail from Conference USA) to opt out of the 2020 season. ODU first fielded a football team in 1930 and played until they disbanded in 1941. The program rebooted in 2009 at the FCS level and moved up to the FBS ranks in 2014.

New Mexico State – the Aggies, who have participated as an independent FBS program since 2018,  announced the postponement of their 2020 football season on Aug. 13th.  New Mexico State first hit the gridiron in 1893 (as New Mexico A&M) and, prior to this year, have only not fielded a team on three occasions – 1918 and 1944-45.

UConn – the Huskies (who were due to play as an independent for the first time this year) were the first FBS program to cancel its 2020 season, announcing their intentions on Aug. 8th. UConn’s football program dates to 1896 and has only failed to participate three times previously – 1917-18 and 1943.

Ms Daughters, I’d just like to say that I enjoy the kinda insights that your work here features, I took the opportunity to peruse some of your other work, and I’m a big fan. In general, this is a great website, and during this pandemic, has become a personal favorite. Bravo to all!

Thanks Steve! We are grateful to have Amy write a weekly piece here at FBSchedules!