Breaking down Week 1 of the 2022 college football schedule 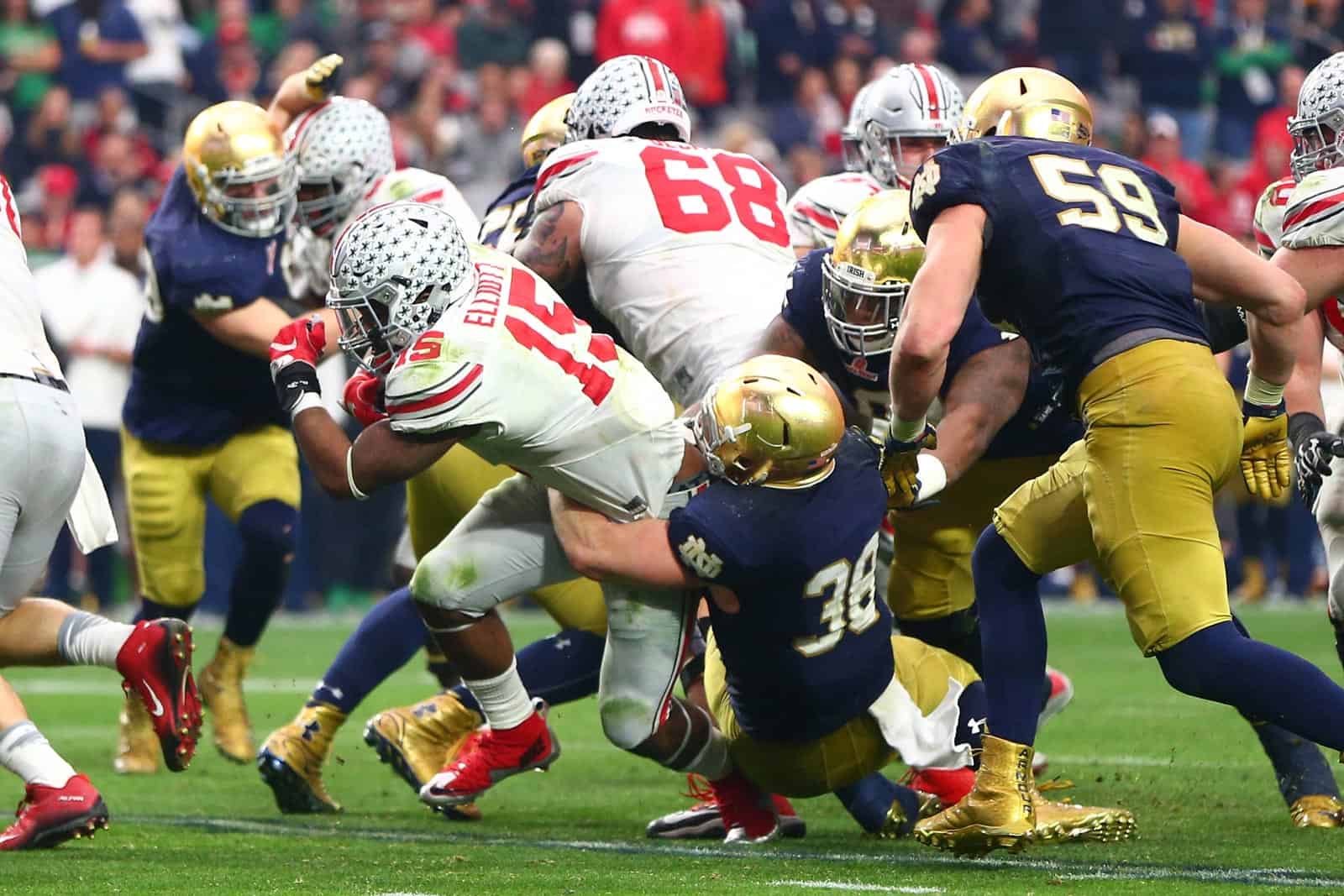 Cue up the band, ice down your beverages, gird your loins…Friends! College Football is back!

Week 1 of the 2022 college football schedule is a lot like the buffet at Golden Corral, the sheer expanse of offerings, the miles of steaming goodness leave the hungry you – who hasn’t eaten since last January – thinking…Whoa! But, as is the natural order of things, all that quantity comes with a logical and understood dip in quality.

Of the whopping 83 games on tap for Week 1, 37 – or 45 percent – feature an FBS team taking on an FCS foe. Of the 46 FBS vs. FBS matchups that remain, a mere ten are between two Power 5 members, three of which are conference games. So, while, yes, there’s lots to see here – it’s not an Apples vs. Apples comparison when it comes down to choosing what to watch.

And that’s where we come in, with the first installment of a 13-week guide of recommended viewing and fascinating facts. It’s our great hope that it will serve as a tool, and a constant companion, as you go week-to-week through a season that offers enthusiasts 1,574 matchups to choose from.

(1). The action starts on Thursday night, which is jam-packed with 16 games, ten of which include an FCS program.

(2). Friday night is home to eight games, three of which feature an FBS vs. FCS matchup.

(4). With the kickoff of the NFL regular season still a week away, don’t forget to tune in to Florida State vs. LSU on Sunday night (ABC) and (4) Clemson at Georgia Tech on Monday evening (ESPN).

The return of the Backyard Brawl, these two old rivals haven’t clashed since 2011 when West Virginia left the Big East for the Big 12. Prior to the move the two programs – located only 75 miles apart – met consecutively since 1943 and from 1919-39. Renewing their vow to hate, the pair have dates booked from 2023-25 and again from 2029-32.

Even though the Cowboys are three-touchdown favorites in this one, don’t miss the boat on seeing one of the top running backs in the nation – CMU sophomore Lew Nichols III (#7) – who finished 2021 ranked No. 1 in the FBS in rushing yards per game (142.15). Oklahoma State was uber successful stopping the run last season (No. 5 in the nation) but returns a mere four starters and only two of their top eight tacklers this year.

Tune in to this one to see senior Purdue QB Aidan O’Connell (#16) take on a Penn State secondary anchored by junior CB Joey Porter Jr. (#9). Where the Boilermakers wrapped up 2021 by hanging up 534 air yards on Tennessee in a victory in the Music City Bowl, the Nittany Lions held then (21) Arkansas to a mere 98 passing yards in the Outback Bowl.

Appalachian State returns its top four backs and four of its five starting offensive linemen to a rushing attack that finished last year ranked No. 34 in the nation in yards per game. Cue up North Carolina, which finished last year ranked No. 98 in the FBS vs. the run and could this be a Week 1 upset? Vegas seems to be nodding its head in agreement with the Tar Heels favored by a mere 1.5 points.

Oregon returns just one starter to a secondary that finished 2021 ranked No. 89 in the FBS vs. the pass. This weakness may be exposed (especially with no time to ramp up) against a Bulldog offense that has three of its top four receivers from last year healthy and ready to play. While the passing game is far from Georgia’s superpower, senior QB Stetson Bennett (#13) might look more promising than advertised vs. a top-ranked club with a new head coach – neither of which may have had enough time to find their footing.

Despite their mention in the preseason AP Top 25, the Cougars are only four-point favorites vs. a UTSA squad that returns 13 starters to its 12-2 product from a year ago. Did you know that third-year Roadrunner head coach Jeff Traylor is a perfect 7-0 in September? The Alamodome ought to be rocking for this in-state love affair.

Arizona has won just one game since 2020 and is a six-point underdog at SDSU. With 15 starters returning and a new QB (Washington State transfer sophomore Jayden De Laura #7) a potential win over the Aztecs may not look like a big deal on the surface, but it would be monumental for a program desperately in need of an injection of hope.

One of the biggest mismatches in Week 1, tune in to this one to watch USC’s passing offense – forecasted to be one of the top three units in the FBS – have its way with a Rice defense that finished No. 123 vs. the pass last season. Brace yourself for a passionate, coast-to-coast declaration that Lincoln Riley’s shocking move from Norman to L.A. was the greatest coup in college football coaching.

This matchup marks James Madison’s first-ever game as an FBS program. The Dukes – 44-61-1 all-time vs. the current FBS and 2-19 vs. Power 5 opponents – are newly christened Sun Belt members. It’s also the first time in 88 years that a U.S. President’s name is so directly associated with the top level of college football. In 2022, it’s JMU’s namesake – the 4th president of our United States – and in 1934 it was Gerald Ford – eventually our 38th president – who played center for Michigan from 1932-34. Ford was a member of the back-to-back national championship teams in 1932-33 and was named the Wolverine’s MVP in 1934.

The good news is that Ohio State returns virtually its entire secondary from last season. The bad news is that it’s a unit that finished No. 96 nationally and No. 12 in the Big Ten vs. the pass. Though solid improvement is expected, will the matchup with Notre Dame’s receiving corps – ranked No. 11 in the nation by Phil Steele – arrive too early for the progress to come to full fruition?

As 42-point favorites, Alabama seems like the least likely candidate to fall victim to a Week 1 shocker to little Utah State. But wait! Isn’t this the same program that went 11-3 last season, won the Mountain West conference, and downed Oregon State 24-13 in the LA Bowl? It seems like a high level of on-field achievement for virtually zero respect from the oddsmakers. Here’s to hoping the Aggies play their big hearts out in Tuscaloosa.

While it’s no surprise that Mike Leach’s third product at Mississippi State is predicted to go nuts through the air, things may explode early vs. a Memphis team that returns just six starters to a defense that finished 2021 ranked No. 104 in the FBS vs. the pass. Bulldog junior QB Will Rogers (#2) was the fourth most productive passer in the land last season and returns three of his top four targets this year.

This little hidden rivalry gem is also known as the “Safeway Bowl” a name that refers to a quip made by Matt Simon, who posted a 18-26-1 mark as the head coach at North Texas from 1994-97. Simon’s tenure came during a 14-year hiatus when the Mustangs and Mean Green, located 37 miles apart in the DFW metroplex, didn’t meet.

I’d like to play because I think we could beat them, and my players feel the same way. If they’d like to play on a Safeway parking lot … just give us a date and time.

SMU and North Texas first met in 1922 and played consecutively from then until 1942 and again from 1976-82 and from 2014 until the present. The Mustangs lead the all-time series 34-6-1 and have won three-straight. The two don’t currently have any future dates booked.

If you’ve missed people heartily claiming “Texas is back” then this one is for you. Tune in to see the Longhorns’ offense, which returns seven starters plus injects a bunch of new top-tier talent, take on a Warhawk D that returns a mere four starters to a defense that finished 2021 ranked No. 101 nationally in scoring and No. 125 vs. the pass. Holy Bevo!

It’s been 22 years since LSU kicked off a season as an unranked team. The year was 2000 and it was the first of Nick Saban’s five seasons in Baton Rouge. Saban took over for Gary DiNardo and promptly turned around a team that had gone 3-8 in 1999 to an 8-4 mark in a 2000 campaign that wrapped up with a win over (15) Georgia Tech in the Peach Bowl.

Week 1 is host to a pair of first-ever events that are a combined 217 years in the making. First, UCLA has fielded a football team since 1919 and has yet to square off with a current MAC member. All that changes on Saturday when Bowling Green makes its first-ever visit to the Rose Bowl at 2:30pm ET on the Pac-12 Network.

Next up, in all its 114 years of football history Western Kentucky has never played a member of the Mountain West contingency, that is, until you guessed it, this Saturday, when the Hilltoppers visit Hawaii. Kickoff is scheduled for midnight Eastern time.

Cue up the palm trees swaying, it’s history being made in two of the most beautiful settings in college football.

Great info Amy. If only we could get Purdue and Iowa St to play each other. Last meeting was in 1895.

Regarding a U.S. President’s name directly associated with the top level of college football, George Washington University fielded a football team through 1966. GWU was a member of the Southern Conference, and in 1966 and prior regularly played top opposition. GWU won the 1957 Sun Bowl over Texas Western (now UTEP). At that time, Southern Conference members played in the top-tier University Division of college football.

No future dates are scheduled for North Texas vs. SMU but will be conference mates in the American starting next year